Track_STEEL KNOTTS 26-10-2014.gpx Open full screen  NB: Walkhighlands is not responsible for the accuracy of gpx files in users posts

Day two of our week in the Lakes, and with the weather getting worse. Gales I can handle. Rain I can handle. Low cloud I can handle. All three together, and it's not so much fun. The weather forecast promised things would be slightly better over to the eastern side of the national park, so we headed off to Howtown with a view to climbing one or more of the fells at the northern end of the High Street range.

By the time we arrived at Howtown the weather was still not great - a howling gale blowing a light drizzle painfully into your face - but we reckoned by gaining a few hundred feet by setting off from the top of the hause, and by planning the route so that we spent most of the time with the gale at our backs, a quick walk up and down Steel Knotts should be doable. 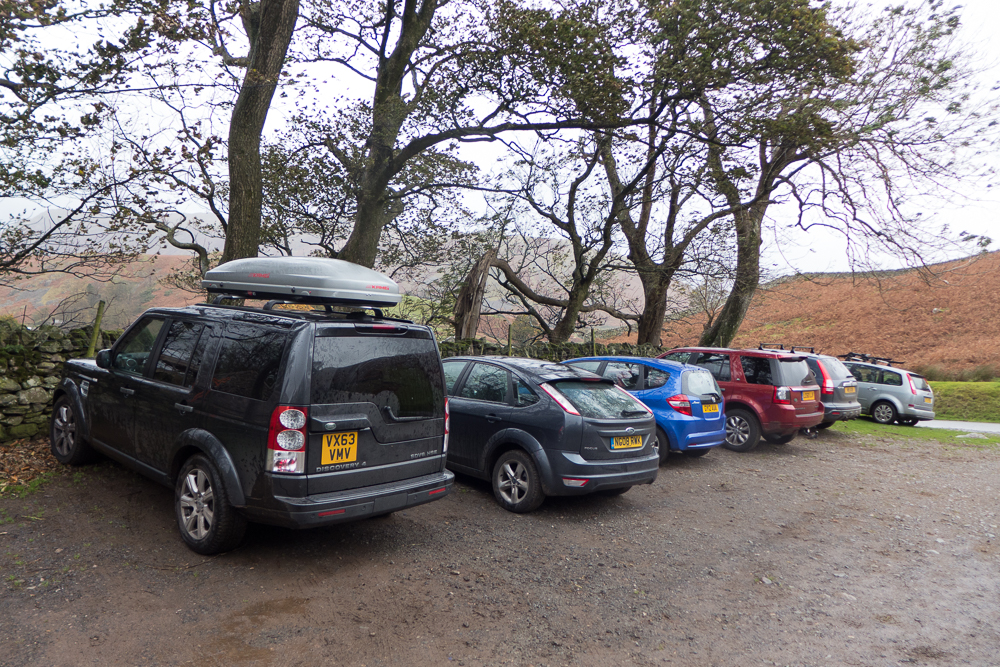 It took quite a bit of willpower to get out of the nice warm car into the gale. 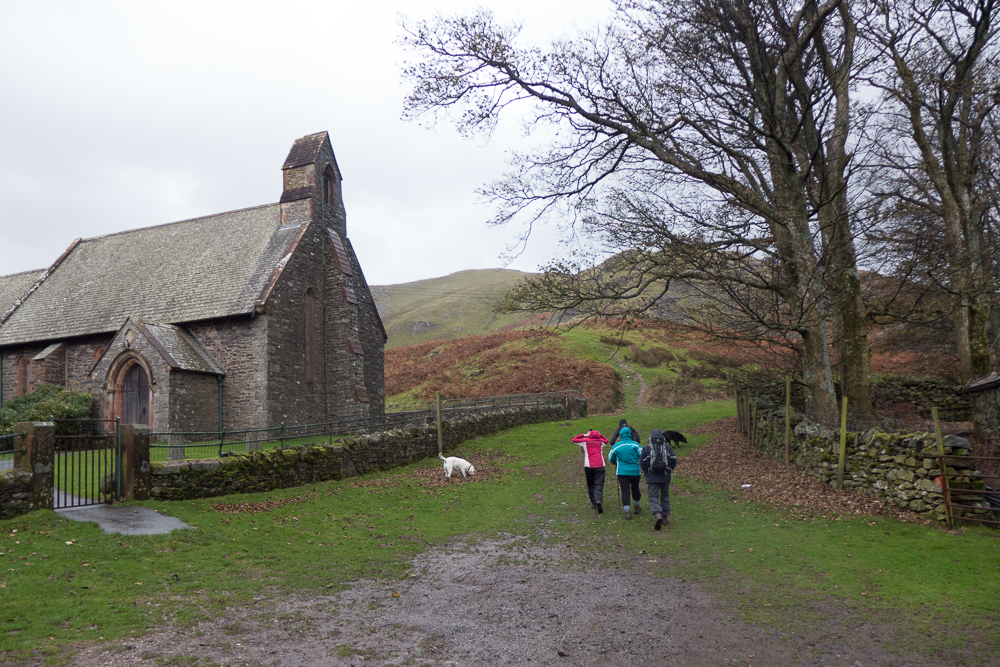 Setting off past the church

I had misread the map at this point and decided it was only half a kilometre to the top, so we set off reasonably confidently. 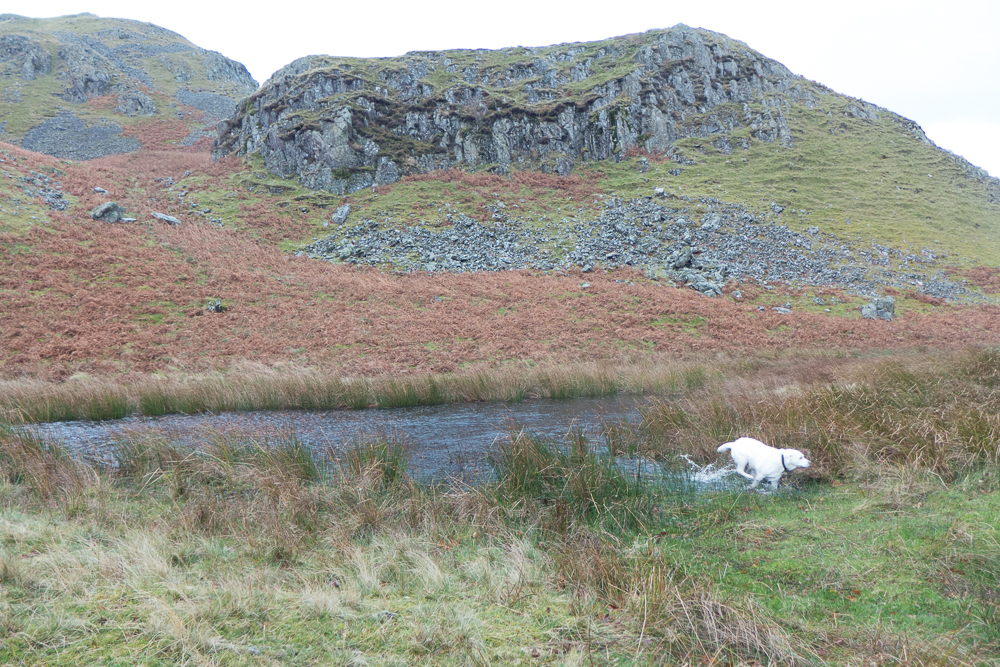 There seem to be quite a few tarns in the Lakes called Lanty Tarn (or Lanty's Tarn) - not sure why. 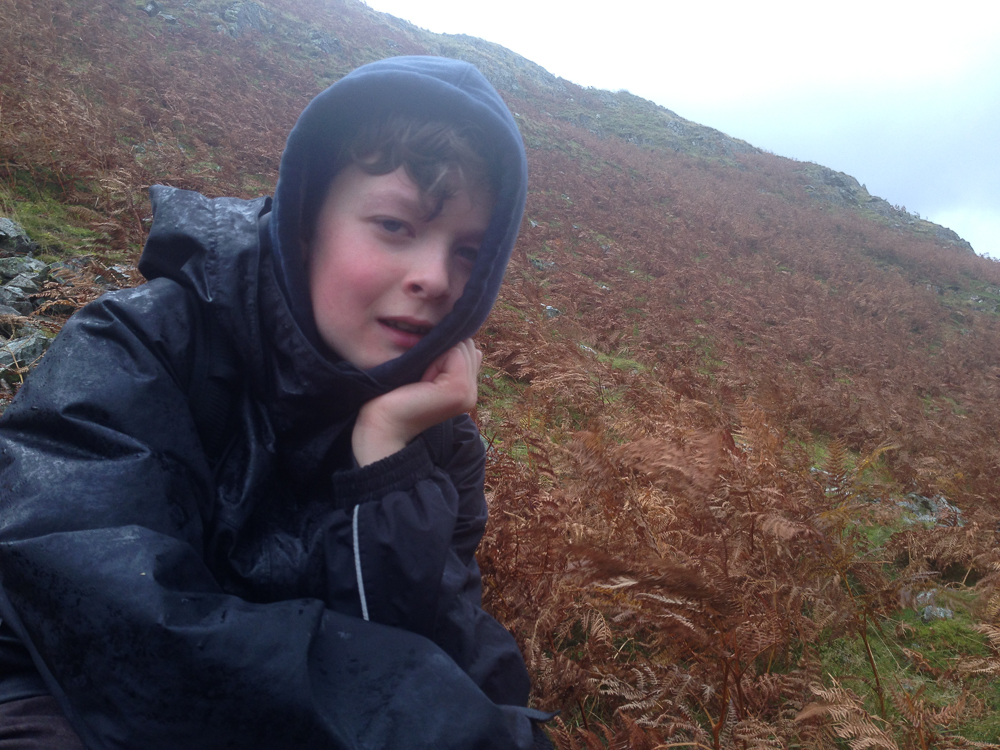 The path shown on Wainwright seems to reach the ridge rather sooner than the one that actually exists on the ground - but I suspect given the wind we were better off keeping below the ridge for a bit longer anyway. 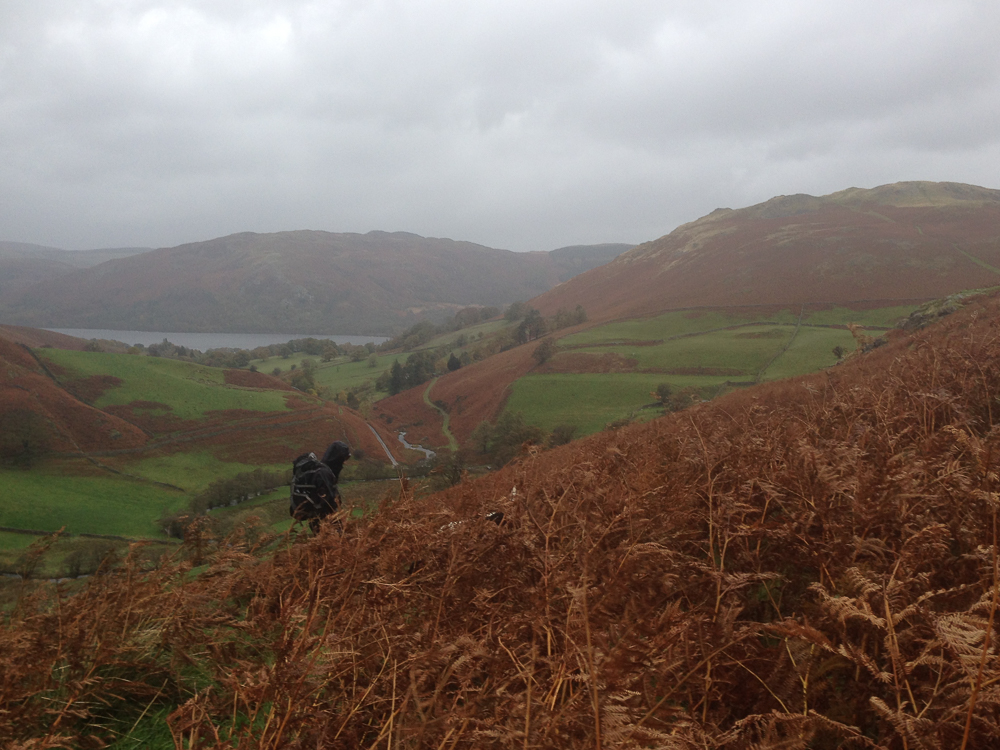 Looking back towards Hallin Fell and Ullswater

This part of the walk was not particularly pleasant - the wind and rain were stinging our faces, and there were several votes for turning back. But with the summit so close it seemed silly not to continue. 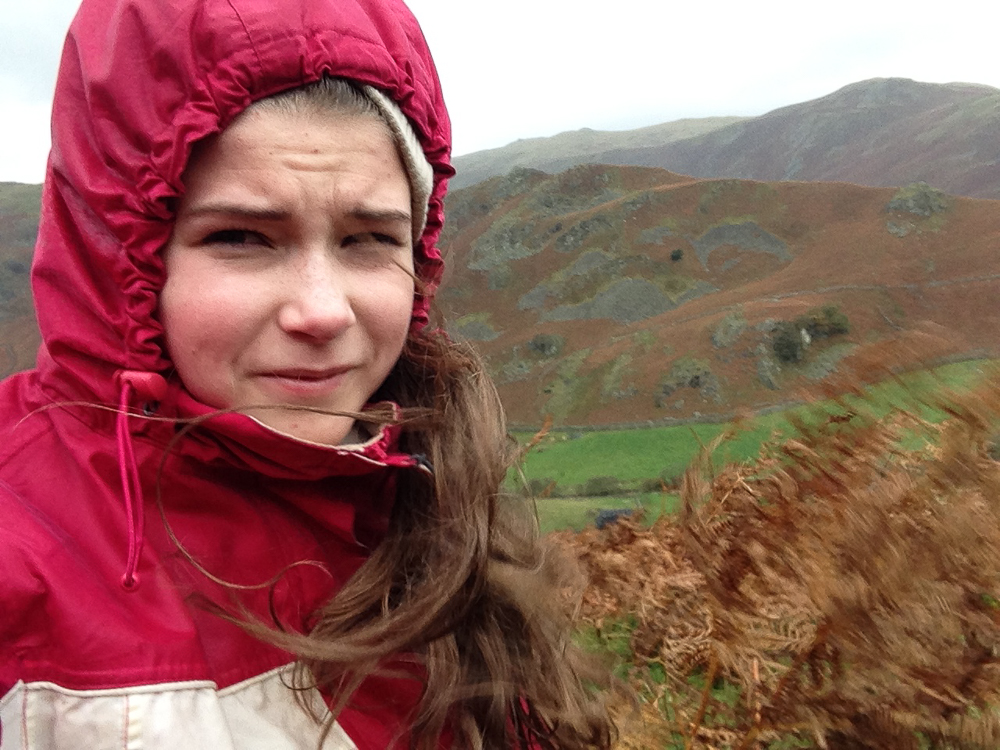 After a while the path petered out and we turned left to let the wind push us up to the ridge. 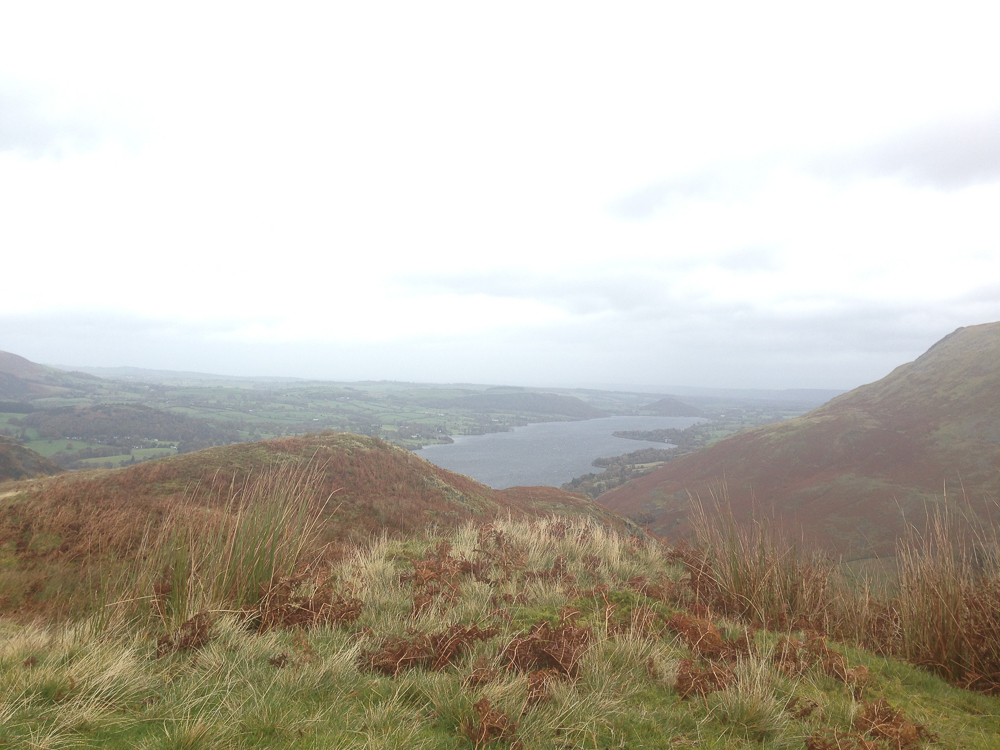 View from the ridge

The kids marched on ahead and sat down confidently at a cairn with a nice view of Ullswater.

However my GPS told me that was not the actual summit, so we walked past them and headed off to the real summit (called Pikeawassa). For once this might be a chance to arrive at the summit ahead of them! 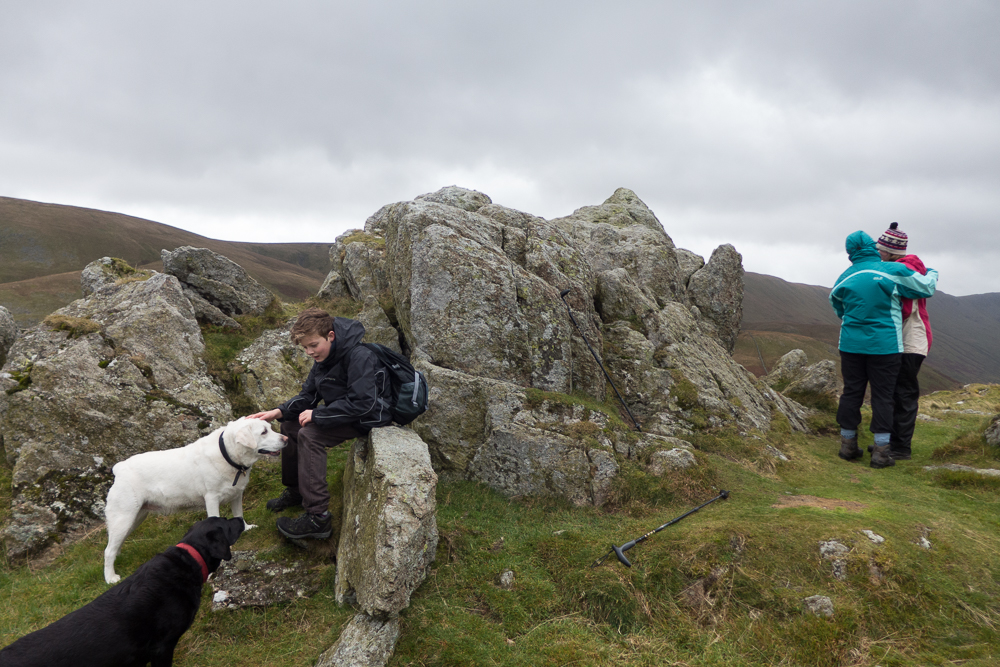 The true summit was pretty distinctive - rising to a sharp point that Wainwright claims would be difficult to stand on - impossible in this wind, I reckon, but we were able to at least touch it. 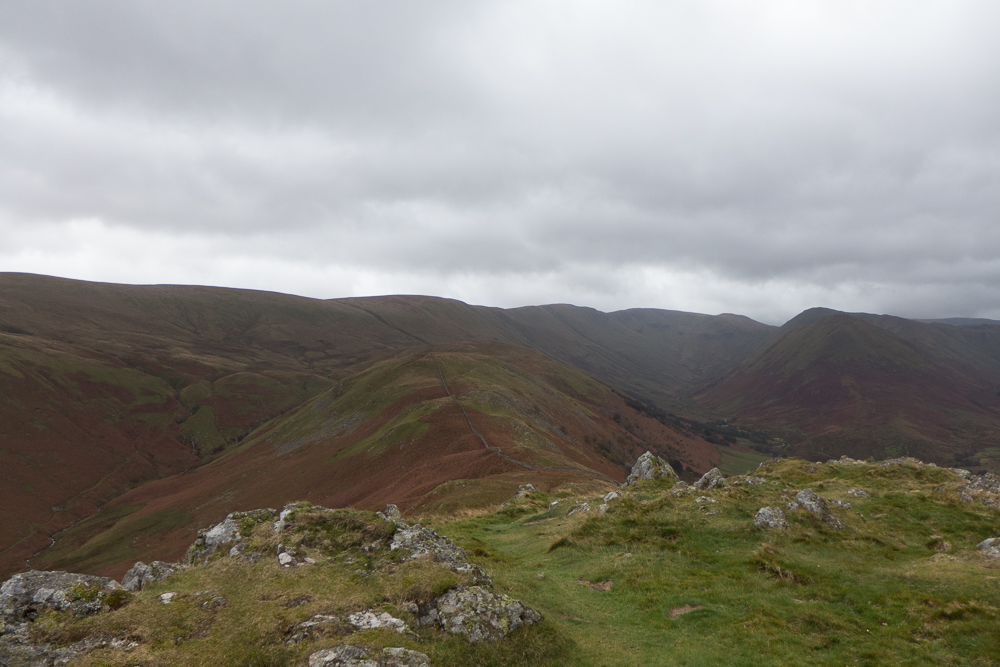 The view of the High Street Ridge was quite tempting us to continue - the rain by this time had stopped - but the wind and the pain in Sarah's knees convinced us it was better to head back down. 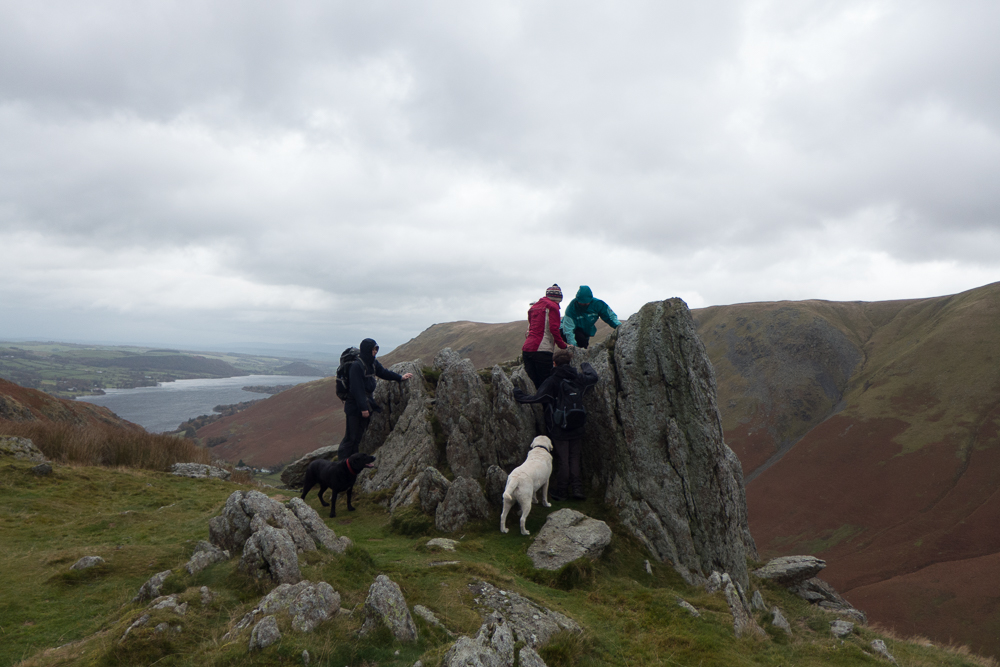 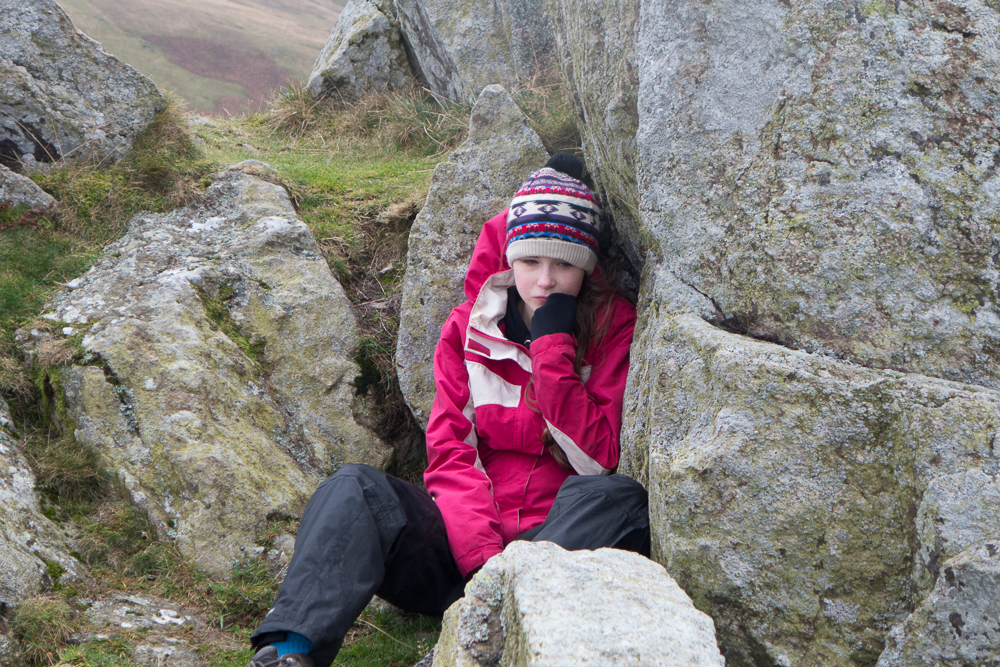 The walk down the north ridge, now with the wind at our backs, was much easier going than the ascent had been, with a fine view of Ullswater (and of the Howtown Hotel...) ahead of us. 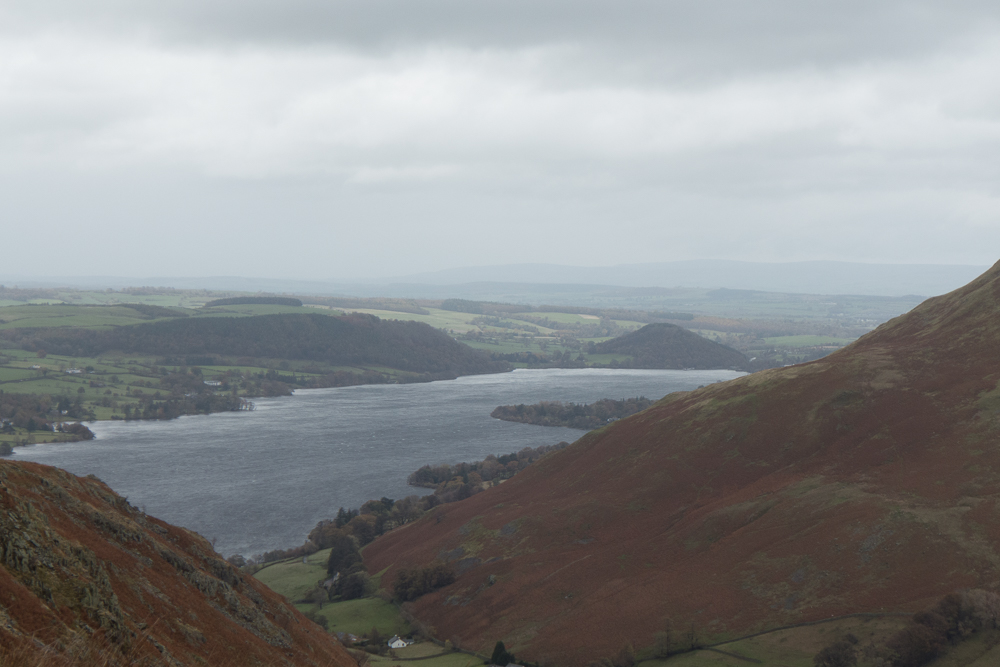 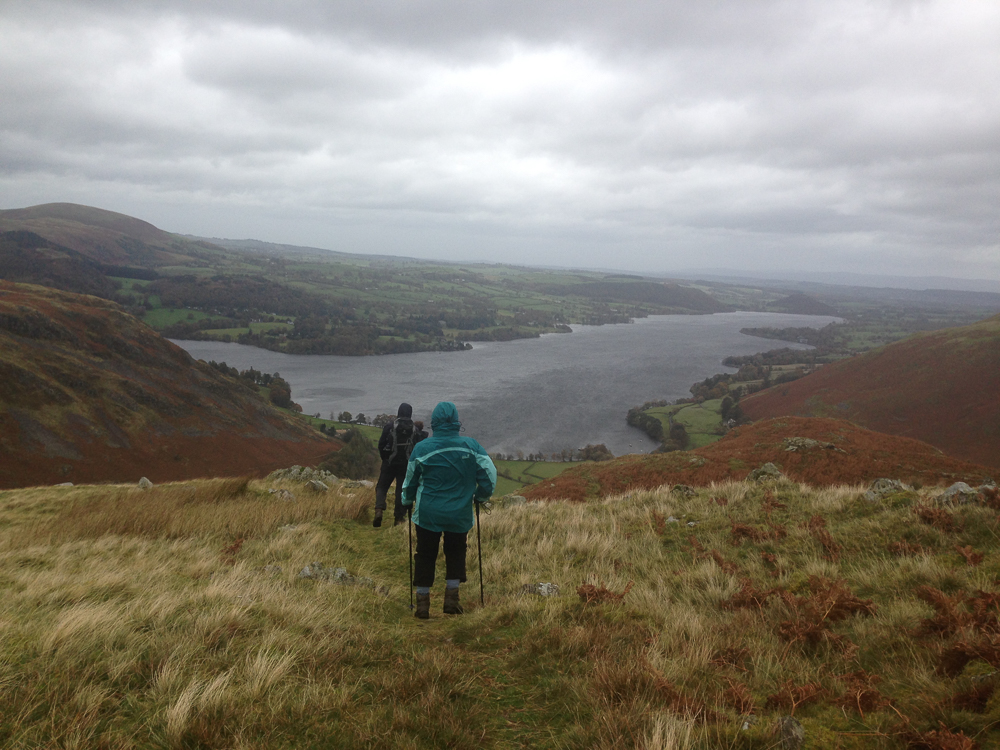 Heading down the north ridge 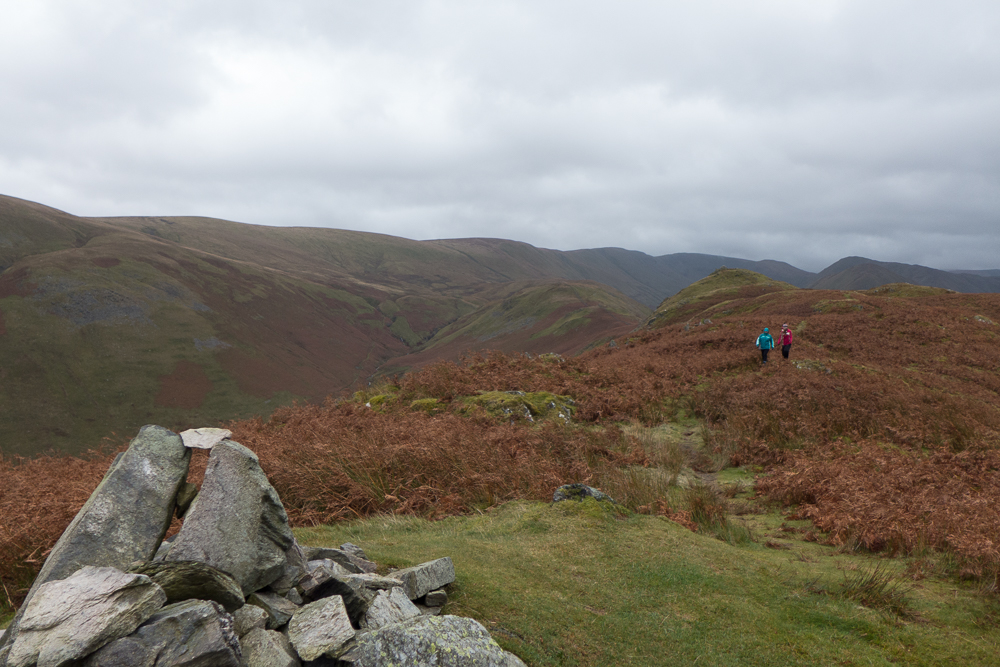 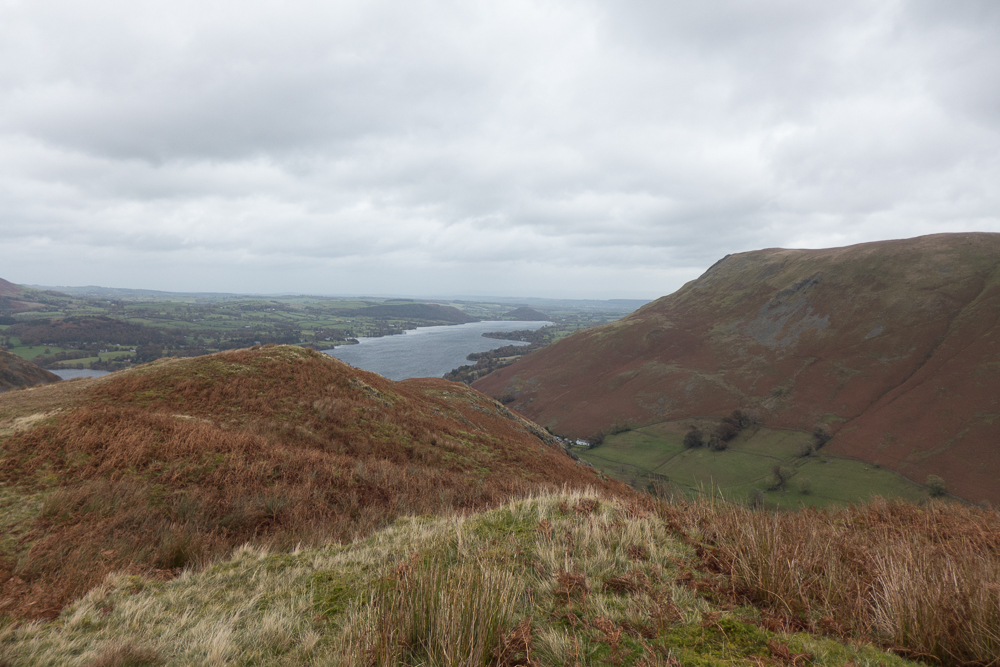 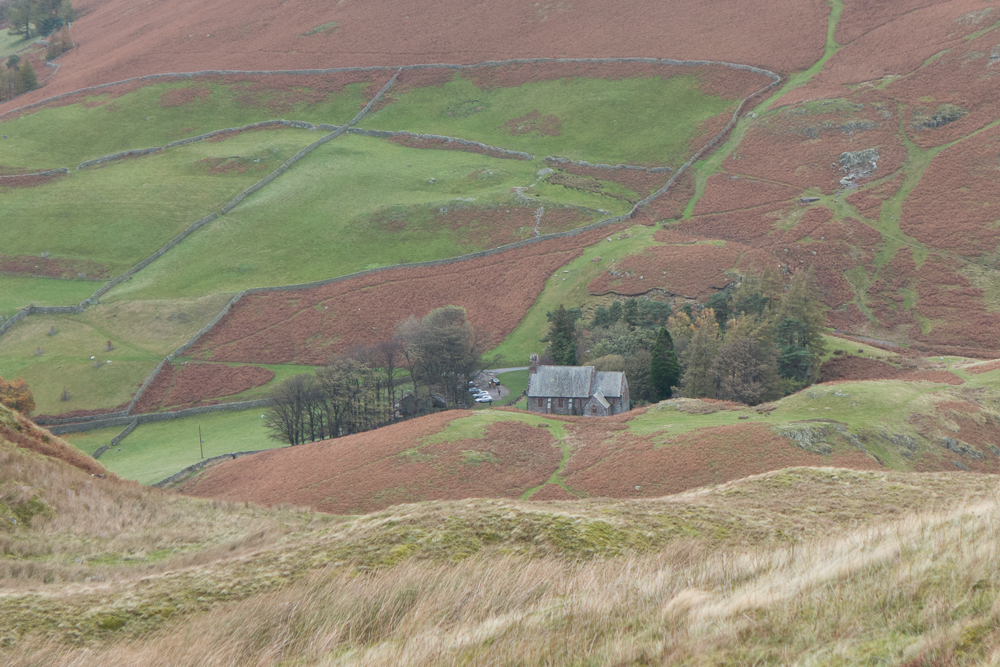 I can see the car from here... 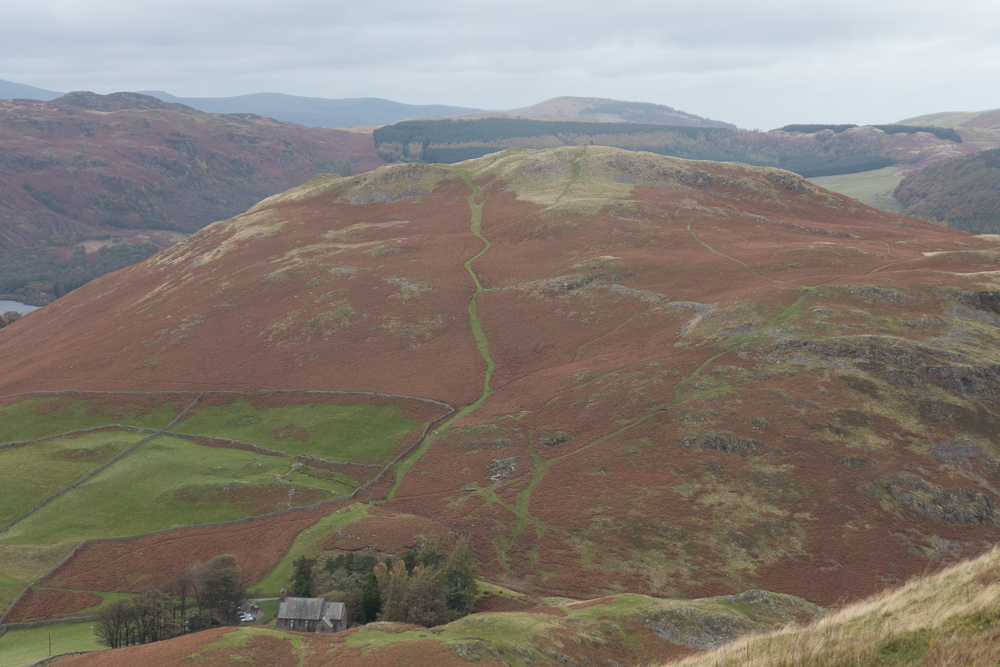 At the foot of the ridge we parted ways - I headed back up to fetch the car, while Lorraine and the others headed for the pub for a hot chocolate. 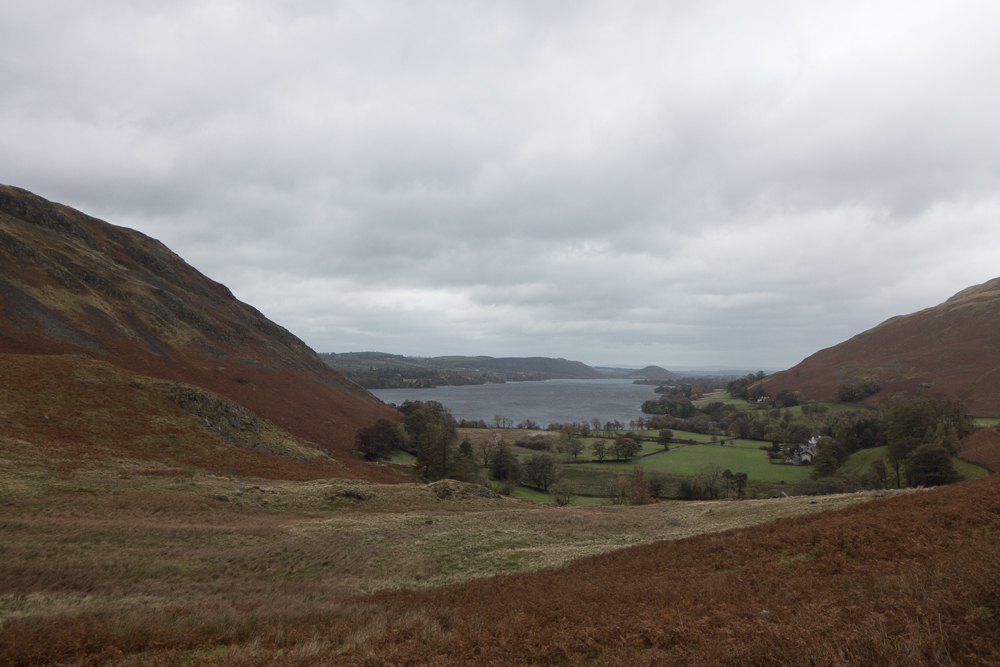 Ullswater, from the Howtown path

A short walk, but it felt like we did well to get a walk in at all in the circumstances. And with even worse weather forecast for Monday and Tuesday, we were grateful for what we could get.