Is it Still Summer?

Is it Still Summer?

Corbetts included on this walk: Meall na Leitreach, The Sow of Atholl


After a leisurely drive up the A9 I was parked up at Dalnaspidal and ready to go for 8.20am. Plenty parking spaces on either side of the road by the railway line and I had my pick of them as there was no one else around. One thing I did notice on the road up, the chap that lives at the layby a mile south of House of Bruar has bought himself a great big new tent.

Things didn't look very promising on the road up so it was surprising to see that the clag seemed to be sitting at around 700m. Once over the railway line I headed towards the lodge then took the right turn (signed Rannoch) following a track heading for Loch Garry. Crossed the sluice bridge over the Allt Dubhaig and continued on to the next bridge over the Allt Coire Luidhearnaidh. Just before this bridge I took a right turn and followed a newish looking bulldozed track (not sure if this one was built at the same time as the one that runs parallel to the A9 south of Dalnaspidal?) climbing gradually uphill keeping the Allt Coire Luidhearnaidh on the left. 2nd bridge with Loch Garry beyond After 10 minutes I came to a split in the track and took the right turn. This track only lasted about 100 yards before reaching a rather attractive 4x4 parking area/turning point. At the far end of the turning point I found an old track which was a bit damp but clear enough to follow as it headed up the lower slopes of The Sow. I reached a point where the track had stopped gaining height and it was now time to leave it behind and pick a line through the heather. This bit was a bit damp and fairly steep so it was a good feeling to reach the short cut heather and get blasted by the wind -must be nearing the top. 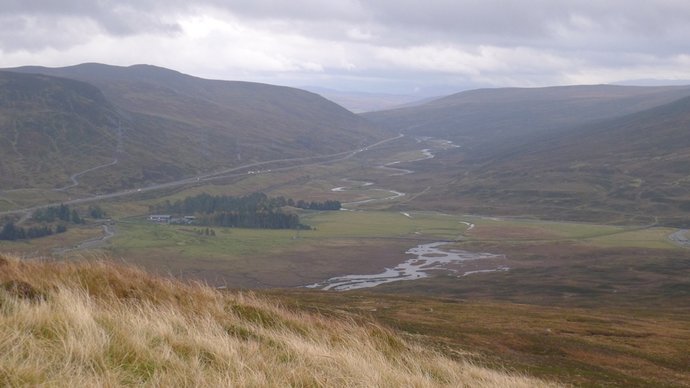 Looking south towards the A9

Once on the short heather the gradient eased and it was an easy walk over to the summit. Unfortunately the low cloud meant there were no views to be had. View south - or is it the other way round?

Pretty windy on the summit but still quite warm, even on the exposed top i've still just got a long sleeved thin summer top on - balmy.

After a couple of photos I just retraced my steps back down to the bridge over the Allt Coire Luidhearnaidh. From here I wasn't sure if I could just head directly for the sluice bridge at the head of Loch Garry as I needed to cross the waterway and I couldn't see a bridge so played safe and headed back to the bridge over the Allt Dubhaig and followed the grassy left bank. Once over the bridge it's a quick left and right to start the climb up Meall na Leitreach. This track is a bit on the damp side, probably not surprising after all the recent rain. It's a bit of a damp miserable climb up as the low cloud means there's not much to look at on the way so head down and engage trudge gear. Once the main climb is out the way it's an easy walk along the wide ridge with a slight descent before the final pull up to the top. The only dry bit - the 100m walk over to the summit Another short stop at the top for a couple of photos and off back down the track. The Sow of Atholl - looks steep from this angle

The walk back down the sodden track was going OK till reaching this point. On the steepest, wettest section of track I did my one minute take of bambi on ice with three top class dives straight in to the mush - oh happy days.

Back at the car in 3hrs 50 mins so not a long day and I can imagine on a better day the views are probably really extensive - maybe next time.

Spied that chap's new tent on Monday! Was in Inverness with work.

Decent day for a walk. Meant to take in the Sow of Atholl in August whilst walking the 4 munros at Drumochter but weather was awful. I'll get it another day.

PerthAlly wrote:Spied that chap's new tent on Monday! Was in Inverness with work.

Decent day for a walk. Meant to take in the Sow of Atholl in August whilst walking the 4 munros at Drumochter but weather was awful. I'll get it another day.

The Sow is well worth doing but it 's only a couple of hours if done in isolation so worth combining with MnL.

Gordie12 wrote: It's a bit of a damp miserable climb up as the low cloud means there's not much to look at on the way so head down and engage trudge gear.

Hi rockhopper - a good couple of hills to break an A9 journey and on a good day probably really good views.

Love that picture with the bridge and Loch Garry!

I had to chuckle at you Bambi on ice imitation. Been there myself.

Hi Silverhill - must admit it looked really appealing looking down Loch Garry - might do a walk through to Loch Rannoch sometime.