This was a last minute escape, after 2 weeks indoors (apart from a wee bit of cycling) and after checking the forecast which looked favourable. So I bravely mentioned it to Mrs F that I was planning on hitting the hills over the weekend and that I had opted for Saturday, mainly because we are having a family invasion on Sunday for dinner and my skills as a seasoned/highly trained dishwasher will be in demand

I looked at my Munro options - which are limited to the west, north or the Cairngorms. Didn't fancy driving for a couple of hours for a paddle in the west & the Cairngorms need more daylight hours so they weren't an option. So opted for a Corbett expedition and the nearest ones were Farragon Hill and Meall Tairneachan, which still involved a 150 mile round trip

Had a bit of a lie in & left home just after 7.30, first mobile problem was the roadworks on the M90 on the outskirts of Perth, the whole of the northbound carriageway is being resurfaced, not a problem going, coming home was a different matter, traffic queuing at Broxden Roundabout right back to St Johnstone football ground

Then the A9, the camera's are now live, not really a problem, however it was very noticeable that even though the HGV speed has been increased to 50mph they still cause problems. Even on a Saturday every HGV had a nice queue trailing in it's fumes, not the drivers fault.
Arrived at the limited parking area, had the pick of the spaces The track through the forest is easy going, bit steep in places but not at all difficult. Once out of the forest the views of the surrounding area develop slowly as you gain height, bearing in mind you start the walk at over 1000', Schiehallion really does stand out 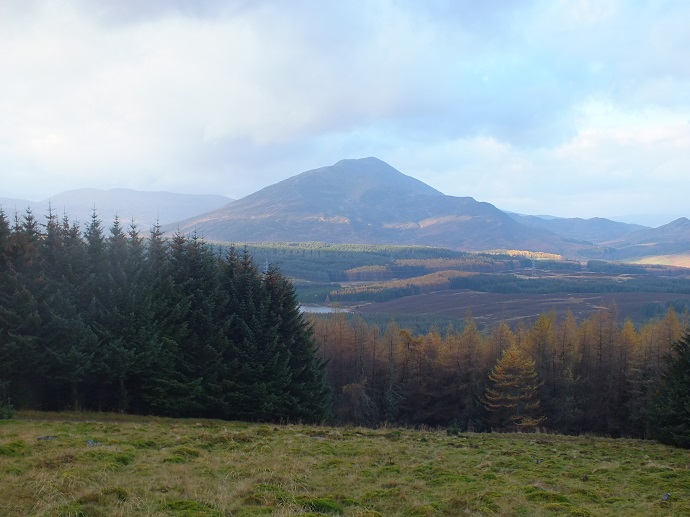 Schiehallion with the sun trying to peek out Looking back down the track to the forest

The first summit of Meall Tairneachan was very easy, albeit I opted to go 'off piste' (as usual) and not follow the WH route I headed up over the tufty grassy slopes but it isn't far to the trig point The trig on the summit A roundabout in the middle of nowhere

The turning circle/roundabout is where you are suppposed to head up to the summit, but I couldn't wait that long Looking back to the summit of Meall Tairneachan and the roundabout

Once back down on the track, it either goes up or down or round a bend, not sure how all the heavy plant vehicles managed to get to the next hurdle. The Foss Baryte Mine, I had to google baryte to see what it is and am not much wiser A couple of local residents determined not to be photographed Farragon Hill and the lack of obvious path

The track kind of peters out about a mile from Farragon Hill, so I decided to 'try' and follow the WH route using my phone with the Maverick app. I don't know if anyone else has tried to follow the route? Maybe my phone or the route was slightly wrong, but it took me across what I would describe as uneven terrain, which was also rather squidgy underfoot, it was rather hard going

Reached the summit in no time Farragon summit cairn, not the biggest, note the mine in the background A couple of nice looking 'man made' lochs

The walk back to the track was so much easier, met a couple of solo walkers on the track before reaching the mine. Took a few photo's of things I didn't notice on the other way Water doesn't look like tap water, hopefully it doesn't get into the water system. I didn't have a torch otherwise I may have had a sneaky look in the mine, was surprised it didn't have a fence or something to stop nosy folk like me venturing inside

Enjoyable day, stayed dry and apart from having to put my gloves on higher up, no extra attire was needed

Next target for me is Mendick Hill on Wed, weather permitting

It was a bit different 12 months ago when I did these two. Good couple of hills these - hope you enjoyed them.

This was a tough walk when i did it, thankfully the track was cleared of snow.

Johnny Corbett wrote:This was a tough walk when i did it, thankfully the track was cleared of snow.

Just had a look at your report JC, what a difference the white stuff makes

Should have mentioned - for the adventurous cyclists most of the walk is on a good track, however you would need to be quite good at either cycling uphill or freewheeling

Some nice photos there.

You should have gone for a walk into the tunnel though Martin. Truth is you can't go too far until you reach the end.

I quite enjoyed a wander round the mine the day I did these two. A couple of good Corbetts

I did use my bike. There was a bit of pushing on the way up and I got a slow puncture after taking one of the water channels a bit too fast on the way down.

I also tried to follow the WH route accross to Farragon and I would say your assessment of underfoot conditions was fair!

That was quite a stroll!

Stayed in a holiday cottage at foot of Farragon a few years back and regret not climbing it now. Only had Munros on radar then.