A spur of the moment wander up The Three Brethren

A spur of the moment wander up The Three Brethren


My day off, and the weather was looking good, far too good to sit inside watching catch up telly( or to be more accurate, watch my wife watch catch up telly) which was the original plan! I spent an hour trying to contact a neighbour who I often walk with, but after waiting with no reply to text, phone call or door knocking, I decided to head off solo! I quickly packed a lunch, and caught the bus to Selkirk. I was a bit pushed for time as we had friends coming for dinner that evening, and I had strict instructions to be home by 4 o'clock.
The bus arrived in Selkirk Square at just after 11, and I had to catch the 3.24 pm bus back to Hawick if I was to avoid incurring my wifes wrath by being late, so I had 4 and a wee bit hours to complete the walk!
I headed down the hill towards The Green, passed the Glen Hotel, crossed the Ettrick Water, and turned left onto the A708 road which heads to St Mary's Loch and Moffat, after a few yards/metres or whatever, the road to Corby Linn heads off to the right of an attractive white cottage, and I made my way along this to the busy car park which marks the start of the walk.
The road, at this point becomes a track, which is mostly in good nick, but is a bit muddy and rutted in parts. The track goes gently up through a forested area with restricted views to Long Philip Burn and Corby Linn waterfall. Turning right at a fork in the track soon took me out of the trees and past a reservoir, the track at this point became quite wet and muddy, testing the waterproofing of my boots...they passed!
From the reservoir, I crossed a stile, and followed the path (I couldn't call it a track by this point!) as it makes it way round the base of Peat Law, with Foulshiels Hill across the burn on the left. It's a gentle climb, nothing to strain the leg muscles too much.
I reached another fork in the path, where I usually go right and head towards the Southern Upland Way, and follow that up to the Brethren, but today, I took the left hand path, which is more direct, pretty damp in parts and quite steep, but again, nothing too taxing!
As I made my way up the path, the views across the Borders countryside gradually opened up, especially to the east, with The Eildons, near Melrose appearing in the dip between Peat Law and the (un-named?) top with the Three Brethren. I spooked a few Red Grouse near the top of the hill, but there was very little other birdlife around on the hills, a couple of Raven on the slope of Peat Law and that was pretty much it!
A couple of other walkers were resting against one of the impressive cairns when I reached the top, I took my usual lunchtime spot when I do this walk, just off the path looking across Yair Forest, over to Meigle Hill, and The Eildons to the East and the distant Moorfoots to the North-West, I'm sure I could pick out Windlestraw Law. The couple left after a few minutes, and made their way down towards Broomy Law, and I was left on my own...just me and the gentle breeze, the occasional bird call from the trees just below me, and the soft hum of distant traffic, it was fantastic!
Unfortunately, it had taken me 2 hrs to reach the top (stopping frequently to take pics and to birdwatch!) and I'd spent nearly half an hour enjoying the solitude, that left an hour and a half to get back to Selkirk Square to catch my bus, so a quick snap back to reality and I was on my way!
I followed the Southern Upland Way down the dip, crosssed the stile and followed the path upwards around Peat Law, before making the gentle descent past Linglie Hill, alongside a strip of woodland, down through Manor Hill Plantaion, joining the Corby Linn Road once again, and then back up through the town to the Square, with just about 5mins to spare...or it would have been, but the bus was 10 mins late!
A really enjoyable walk, the cracking weather helped of course, but despite the lack of height, compared to the Highlands, the scenery and views were stunning, again helped by the weather!
Definitely one of my favourite local walks.
Some pics taken on the walk..... Head right at this cottage! The car park, and the start of the walk. The memorial seat at the start of the Corby Linn track. The track through the trees. Looking back to the reservoir. You can JUST about make out the three cairns on the hilltop! The Eildons come into view! The River Tweed with Clovenfords in the distance. The Eildons from Peat Law 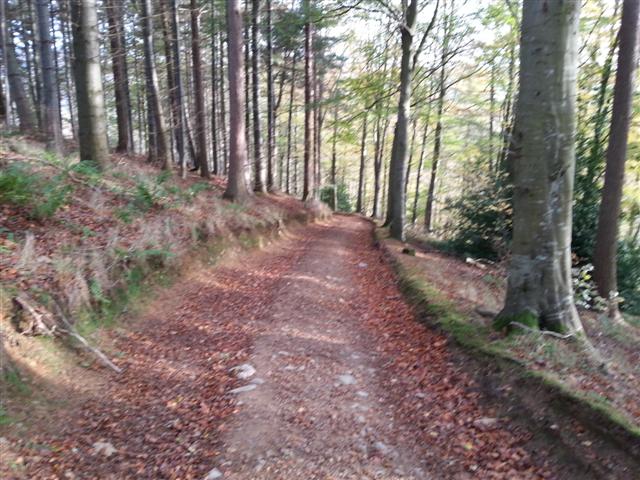 The track back to Corby Linn Road.

Re: A spur of the moment wander up The Three Brethren

I'd never heard of this walk till now, looks a good one. Cheers