camp at Loch nan Eun with 2 munros thrown in.

camp at Loch nan Eun with 2 munros thrown in.


it was my turn to get the half term holiday off work, so we planned a trip to Grandparents/parents/in-laws in Aboyne, while looking for a weather window to get out and bag some hills and try out the new tent.
Wednesday looked like the day, with a good forecast, and not too awful for Thursday either, so we got a nice early start and drove to the Dalmunzie hotel. the party consisted of me, Rudolph and Coldwetandhungry.
Plan A was to walk up Glen Lochsie and across the top of Glas Tulaichan to dump the camping stuff at the loch and then do the round of Carn an Righ, Beinn Iutharn Mhor and An Socach, with a camp depending on the timing, and walk out by Glen Taitneach back to the car.
When we reached the hotel the place was deserted apart from a young man in a cook's uniform trying to find a way in to start his first day of work there. A note on the door told us the hotel was shut till tomorrow, but before long an estate worker/ghillie/owner approached us and advised us that Glas Tulaichan was out of bounds all week for stalking but there would be no problem with the other three hills. So on to Plan B.

carn an righ and beinn iutharn mor.gpx Open full screen  NB: Walkhighlands is not responsible for the accuracy of gpx files in users posts
So it was just before 10am that we set off up Glen Taitneach which is really lovely. It's a long glen with a rickety rackety bridge where we dodged the trolls, and several burns to ford which were all pretty full of water after the recent heavy rain. But it was a pleasant day with clear summits, no wind and a bit of hazy sunshine. 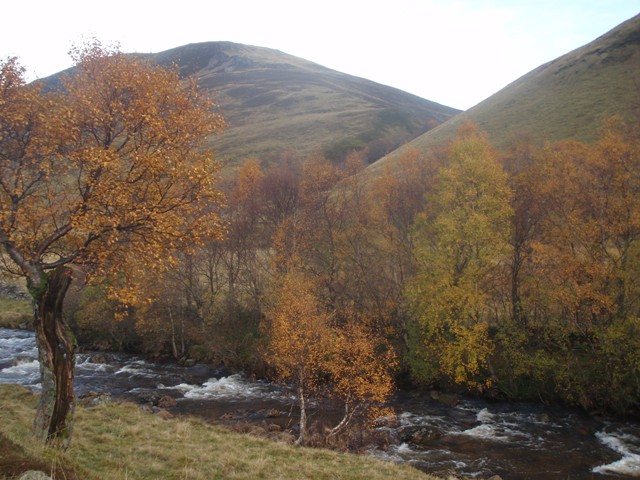 lower glen Taitneach below the bridge Rudolph and me on the Rickety Rackety bridge. It's a lovely long gentle walk up Glen Taitneach 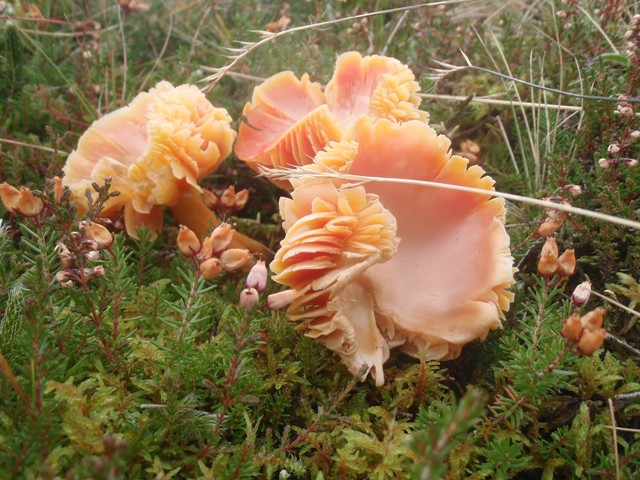 some rather interesting fungus

There are several burns to cross which were quite full. CWH and I did not want wet feet so crossed carefully. Rudolph however went straight over the first one and on the way spotted a rather nice GPS lying in the water. We later traced its owner by finding the waypoint named "home" and it took us straight to a house in Banchory. He had lost it falling off his bike in the ford, was very pleased and we felt very virtuous so all was good.
Just before the glen steepens there is a ford which Rudolph splashed across relying on his heavy gaiters for protection, but CWH and I after a bit of messing about discovered that it is unnecessary to cross here, as there is a good path all the way up the east bank of the burn, which becomes the main path later on.. Rudolph had a bit of trouble getting back over to our side when his path ran out pretty waterfall. there were lots of them in the upper part of the glen pretty burn in the upper part of the glen We reached the loch about one o'clock. You come over the top of the glen and suddenly you are there. It was glassy still and beautiful. We found a wee peninsula protected by a good chunk of bog, on the southwest side of the loch with a lovely view over to An Socach. I don't have a picture as CWH had the camera at this point and didn't take one. Oh well. We pitched the tent on the water's edge and stopped for lunch before tackling Carn an Righ. nice bit of bog to cross that must be Beinn a'Ghlo peeking out at the back

It was quite a long way before we picked up the stalker's path which skirts the bottom of Mam nan Carn. This took us to the bottom of a nice path up Carn an Righ. The path peters out near the top as it gets rocky. It was getting towards sunset by the time we reached the top and we had to decide whether to miss out Beinn Iutharn Mhor or do a bit of night navigation. It was a fine evening and very little wind so it was inevitable really.
On the way up Carn an Righ you can look back and see the path winding round to the left up to the bealach between Mam nana Carn and Iutharn Mhor. We decided not to go that way as it looked like it might get a bit boggy. Instead we went straight up the shoulder of Mam nan Carn to about 900metres then struck left to descend a bit to the bealach with nice short, springy turf underfoot. sunset from the shoulder of mam nan carn.

We dropped our bags at the bealach for greater speed taking pocketfuls of snacks with us. It was quite dusk by the time we reached the top. me looking a little unhinged on top of Bheinn Iutharn Mhor at about 6pm. a good hour after sunset here.

By the time we got back to the bags we had difficulty seeing them, and of course it hadn't occurred to us to leave my bag with the reflective picture pointing upwards!
anyway they were not hard to find and it was now pretty dark, needing head torches to see the ground properly.
We contoured east and walked for 800 metres by pacing. then we popped across the ridge and came down the steep heathery slope to the loch. It all worked rather well, which surprised us a little!
Things look different in the dark. we could see the loch and the horizon, but even when walking right by the loch side it looked like there was a steep bank down into the water.
Back at the tent it was cold and still. there was frost on the tent but no wind at all and we sat outside for a good while eating and drinking and chatting till we ran out of steam and went inside to bed. We played I Spy till it got silly and went to sleep.
Overnight the wind got up and the rain came and in the morning we could barely see the water even though it was only a couple of metres from the tent, so we made a democratic decision to go home without climbing An Socach. Navigation practice is all very well, but being warm and dry is even better! what a pity we didn't take a picture of the lovely campsite when we could actually see it!

So we retraced our steps back down Glen Taitneach back to the car. the happy cups and some pretty jewelled grass and carefully picking his way across. Pictures are mostly by Coldwetandhungry but some are mine! on my camera

Lovely TR there still got this trio on my list/

Did these hills plus Glas Tulaichan during the summer and really enjoyed them. Somebody else was camping in the same spot as you when I went past - looked really appealing.

One to plan for next year me thinks. Cheers

. Informative too - Loch nan Eun now on the "to do" list.

I smiled aloud - if such a thing is possible - at the rationale for not going into the hills on the second day. I'm with you all the way on this. We have some hardened fellow WHs (eg Spiderweb) who wouldn't be put off; but like you, I'm a wimp....

I walked this route when i did Beinn Luthern Mhor and though to myself how Loch nan Eun would make a good wee camping spot. Great report once again

Great to read that you’re not passing by an opportunity to do some hill walking!

Gleann Taitneach looks lovely with the autumn colours. I walked up it on a very grey day in May. Only caught a glimpse of Loch nan Eun before the mist swirled back in again. A great camp spot!
Some very nice pictures by CW&H.

I had to chuckle with Rudolph carefully picking a spot to cross the river and then just splashing across. Were the gaiters of any use there?

Lovely report and a good photographer in CWH. At CAR summit she looks so like you!

Thanks folks for your kind comments. We'll be back up this way and it will be no hardship to camp again in the same spot I'm sure.
CWH is much prettier than me!
Rudolph's boots took the rest of the week to dry. CWH and I had dry feet. But it was quite funny.

Lovely report, Loch nan Eun is a great place to camp. Loved the misty autumn photos, and the smiley mugs

Good report. I did Tulaichean and Carn an Righ recently, and agree that Loch nan Eun would make a fantastic camping spot - very picturesque ... and I can sympathise with fording the burns in spate!!

- enjoyed that ! Brings back good memories - my first ever wild camp was on the shore of Loch nan Eun, I think not far from your spot - cheers

Nice report. You could try giving CWH a different name in order to get her to behave the way you want. Let me know if it worked next time when CozyWarm&Helpfull (no reason to change the initials) set up the tent and prepared the tea while your and Rudolph relaxed loch-side

I'm always looking at gear:
I stopped using those type's of sleeping mats in cold weather after trying an inflatable one. They are so much warmer and more comfy, well worth the weight penalty. (but more expensive

A nice glen to walk up buttheriver crossings can be a bit hard going after a wet period. Walked up here to the loch for a wild camp with the grandson a few years ago, a fabulous place to camp, guess it's going to be more popular now though