Corbetts included on this walk: Canisp


"So, where shall we go today?" This was the second day of our holiday, staying in a cottage a few miles north of Lochinver. The day before, we had walked from Stoer Lighthouse to the Old Man of Stoer and then completed a nice circular walk with commanding views of the mountains of Assynt. But now my wife had made it clear that she expected me to nominate one of these mountains as being our next destination. I wasn't too sure about this, so I hesitated... "How about Canisp?" my wife said. I had read the report posted by the WalkHighlands people sometime ago and I was aware that this trip had some difficulties when it came to climbing the mountain. A lot of boulders, I thought. Still, if my wife was keen I wasn't going to say anything to deter her - or indeed, my son, who was due to walk with us. Was this a folly? Perhaps. But I had the views of Suilven in mind when I said "yes" we would go there.

And so it began. We started from the small car park on the road to and from Inchnadamph, very close to a person fishing in Loch Awe. For the first Kilometre or so it seemed quite straightforward, but after stopping for a quick bite to eat it soon became clear that no path could be seen and that we would have to pick our way around a heck of a lot of boulders if we were going to reach the top of this mountain. As we continued to climb it soon became clear that both my wife and son were not that happy to persist with this. In fact, they hated it! Boulders... boulders... and yet more boulders. I wasn't that happy too, I have to say, but I managed to persuade them to carry on... until eventually we reached close to the top and we had this tremendous view. 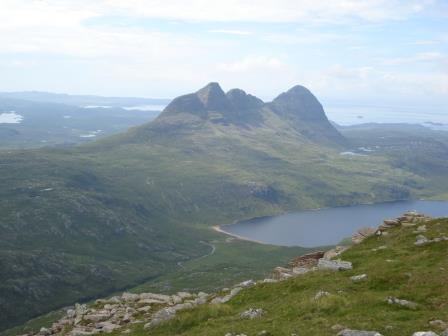 The view of Suilven from Canisp

From the top of Canisp itself - what a view! - over the lochs and lochans of Assynt with the Summer Isles in the distance. Quite magnificent! 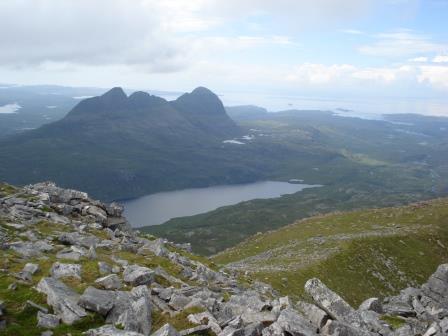 The view of Suilven from the top of Canisp

Unfortunately, my wife had noticed large stormy black clouds approaching, which meant that we had no time to sit around. Instead, we immediately set off and made our way down the mountain. Still, we had a very long way to travel and it probably took us getting on for two hours before we descended and made our way back to where we had parked the car. 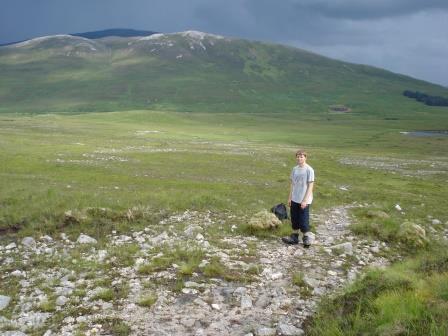 The verdict? Well... even after all this time my wife and son's view - which they would be willing to share with anyone - is that they hated the experience of walking and climbing over so many boulders to get to the top of Canisp. My view? Between you and me, I think that it was a marvellous experience! To look out over Suilven and see that view was something never to be forgotten.

The storm? Well we managed to avoid it... just(!) - as this photograph taken later in the day from Lochinver can testify. 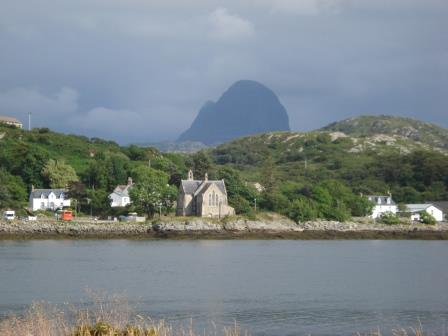 A brooding Suilven from Lochinver

Good stuff, love this area, hope to get back up next year.

I recently had a week up in Assynt and went up Canisp. The view of Suilven is well worth the climb - absolutely stunning.

Nice pictures. Been up a couple of times -once on a cold but calm winter's day and once on an excessively long day that included Suilven and saw us ascend and descend Canisp mostly in the dark. Not that much fun it has to be said.

I shall look forward now to doing Canisp. Suilven just looks awesome, worth an unpleasant climb up boulders I’d say.

Shame that you had to make a quick exit because of the looming storm….

Thanks for your comments! Assynt is a marvellous place - including Canisp. We travelled back there for a short break at Easter. It took just under 8 hours to get to Lochinver - with a few stops on the way - so this must give you some idea of the attractions of this place. As we passed the car park on the road to Inchnadamph, my wife said "Never again...". I have no idea what she meant by this.

The photographs, by the way, were taken with just the one hand, which can be quite difficult at times! Still, it is the marvellous scenery that makes these photographs so striking.

Smashing report; and that pic of Suilven from Lochinver is just amazing.

Suilven is one of the great mountains. Just a pity it's 11 hours drive away...

Some may think this hill is a "lesser Assynt mountain", simply because it does not have a weird shape like Suilven, Stac Pollaidh or the Culs, but Canisp has plenty of character... and views to kill for. It was my first Assynt Corbett and very enjoyable one. Would love to do it again in winter conditions!

Great stuff...the first pic has me yearning for a Canisp-Suilven traverse with a night on the beach down by the loch