It seems like no time at all since the Nethy Bridge meet, and the expressions of sheer horror on the faces of Colleen and Barry (Tina Bonar) at being nominated to deal with the Autumn meet (we know the feeling

Tyndrum's excellent "By The Way" facility was quickly chosen and a fantastic job they did of organising the whole shebang, consisting of 48 WHers, a fabulous quiz by Graeme D and a pile of empties and recycling that could probably dam a substantial river.

In between all this nonsense, some hills were climbed. I headed through straight from work on Friday night. "Straight" is probably not the right word as i tried to take a shortcut to avoid going through Perth, which turned into a mind-numbing three hour drive, adding 20 miles to the normal journey length. 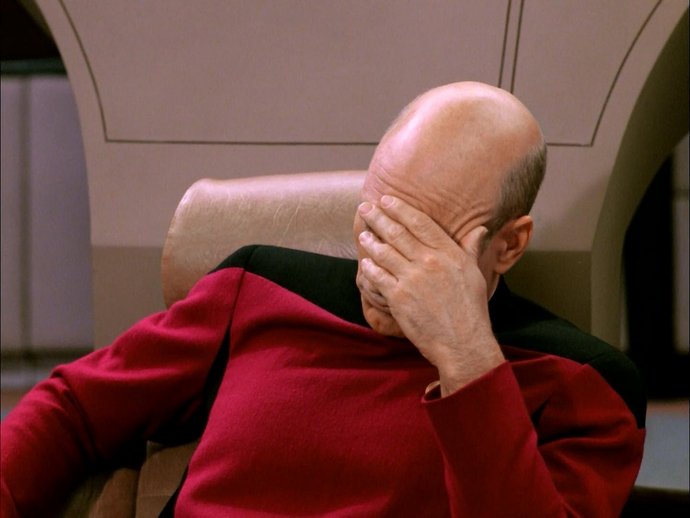 Anyway, I eventually arrived on a rainy night. It's the third time this year I've stayed at the ByTheWay, and it's a fine, modern facility. After a few vodkas too many I gave up and went to bed, remembering eventually that I'd probably have to climb something in the morning.

The forecast duly obliged and the weather on Saturday was far better than previously expected. Myself, Graham, Scoob, Fi, Weaselmaster Al, Sick Kid and Robert were, along with half of the meet, heading for Bidean Nam Bian and Stob Coire Sgreamhach, though we planned to head up via Beinn Fhada. Anyway:


BideanTrack.gpx Open full screen  NB: Walkhighlands is not responsible for the accuracy of gpx files in users posts

We parked up at the start point for the Lairig Eilde and set off on the usual path for the wee Buachaille, taking the early branch off to the right, which takes you quickly down to the Allt Lairig Eilde. After a couple of downpours in the preceding days, this became a rather more interesting river crossing. After a scout upstream failed to provide any better options for crossing, we bit the bullet and got over the dodgy and wet-looking stepping stones without incident, although Robert went a bit further upstream, braving the ice cold water by taking off boots and socks and had a bit of a slip. No harm done though and we set off up the steep initial grassy section of Beinn Fhada. 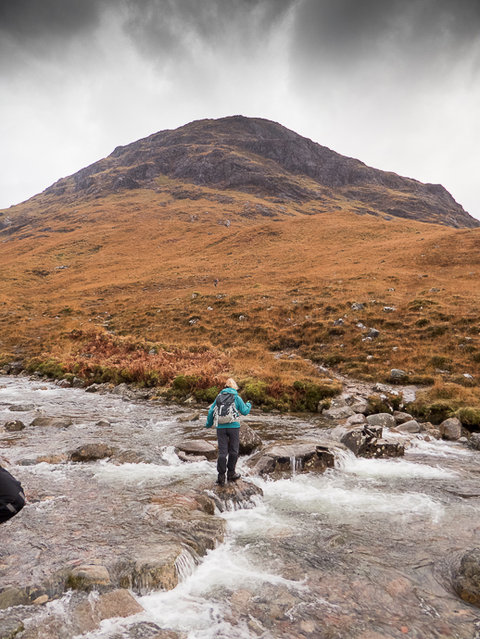 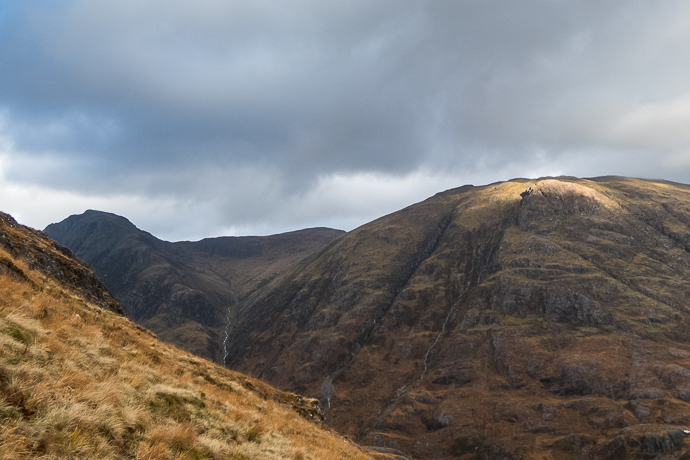 Steep grassy ascents are a slog at the best of times, but height was gained really quickly and the views were terrific. 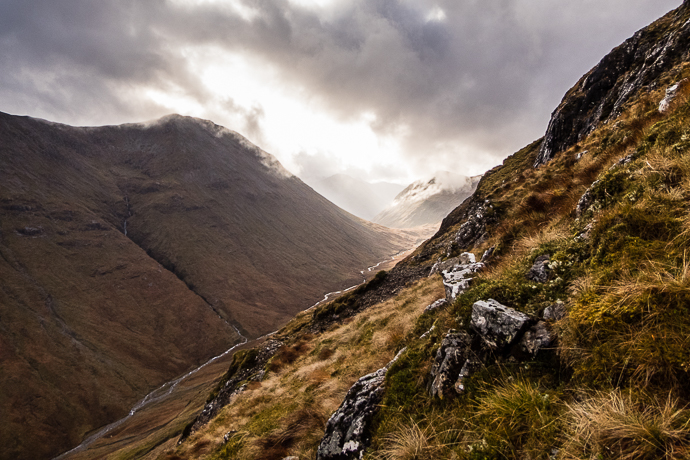 Stob Dubh and the Lairig Eilde

It wasn't long before we reached the rockier parts of the ridge, with a mini-scramble here and there. A lot of the ascent was wet grass and scree, so the rockier stuff was a welcome relief. Before long we reached the top of the ridge, with fantastic views all round, to the Aonach Eagach, Gearr Aonach and up ahead to the day's targets, which still had a layer of cloud hanging onto them for dear life. 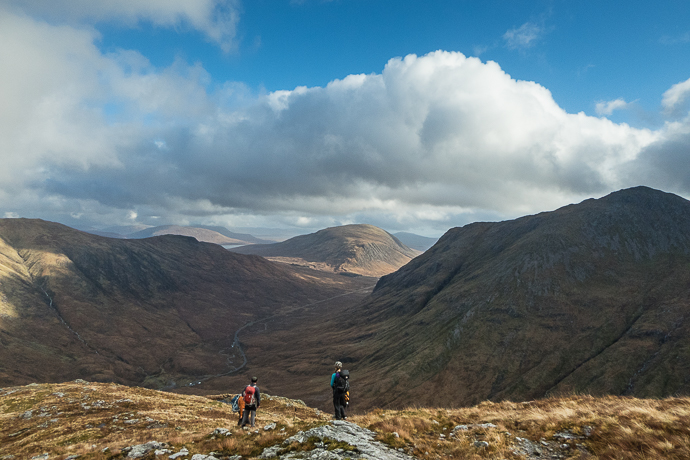 After a short rest, we headed along the ridge, and a cracking ridge it is too. We had good views all round and up ahead the rocky prow of Sgreamhach looked intimidatingly cool. 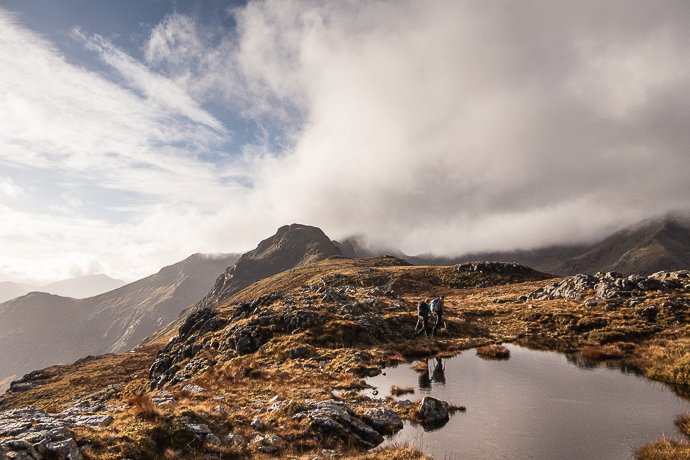 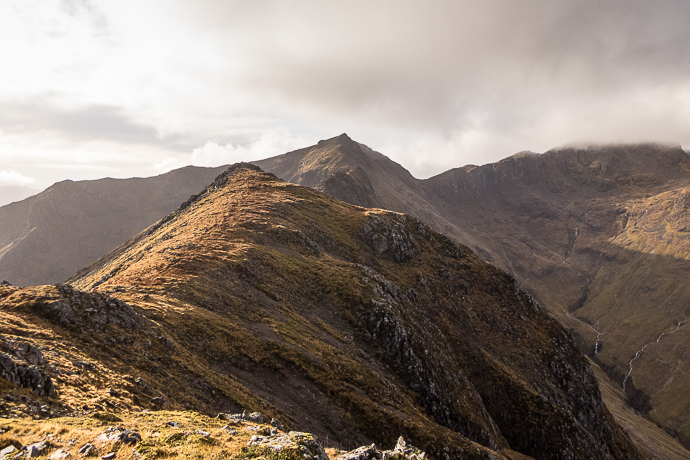 Nice light on the ridge

There was also a fine view into hidden valley. We stopped for lunch shortly after Al had collected the day's first subsidiary top. We now had a clear view as far as Nevis, CMD and the Aonachs which all had a nice covering of snow. It was getting cold so we soon headed off to tackle the remainder of Beinn Fhada, then up to Sgreamhach. 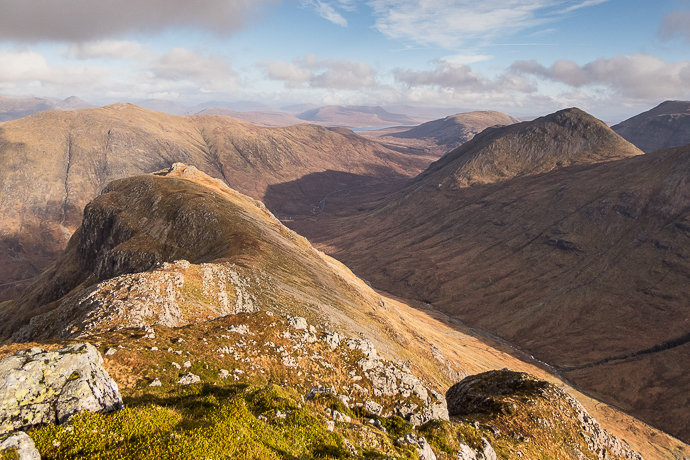 Back to the start of Beinn Fhada 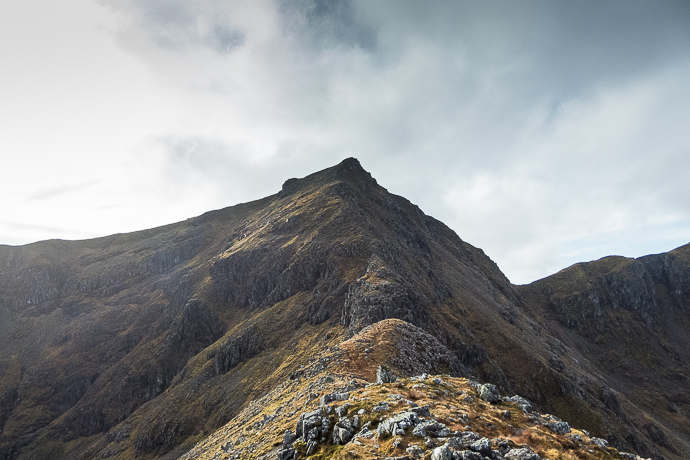 How do we get up there?

Getting up to the summit from a distance looks tricky, as you're faced with a massive rocky prow, but in reality isn't too bad. The path bypasses the prow, leading to a nice wee scramble, which gains height quickly. We were soon at the summit which commands great views, all round. Particularly across to the Mamores and back to Loch Etive. 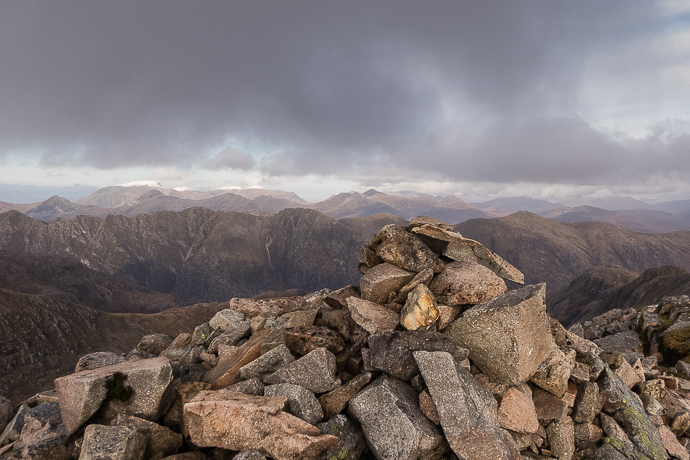 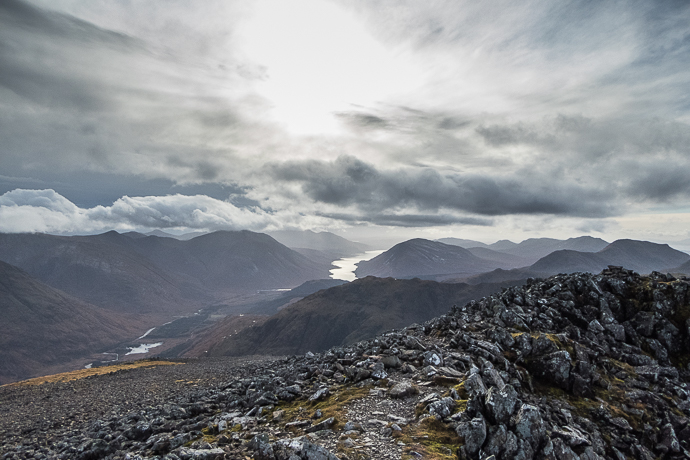 After a very quick snack, and well aware of the time/daylight constraints, we set off for Bidean. The descent is quite straightforward, and although it looks like an unpleasant series of false summits, the re-ascent isn't too much of a grind. 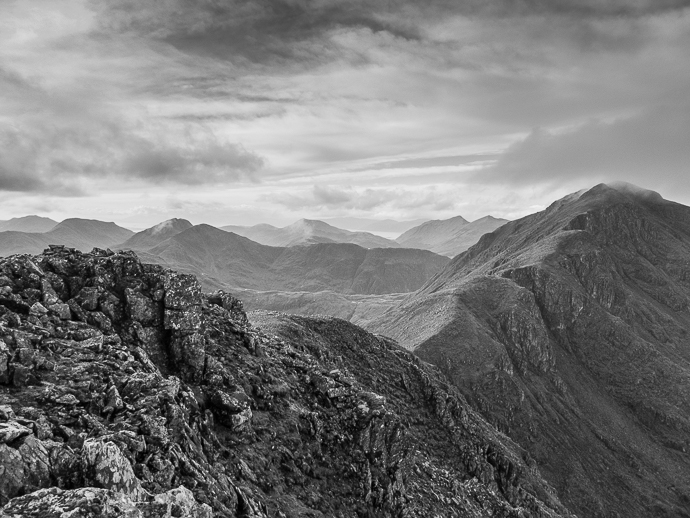 The summit was soon reached. Again a very brief stop. Al and Sick Kid nipped out to the Western Top. I had a bite to eat, took a photo whilst i could feel my fingers and we headed back down, both to keep moving and aware of limited daylight. 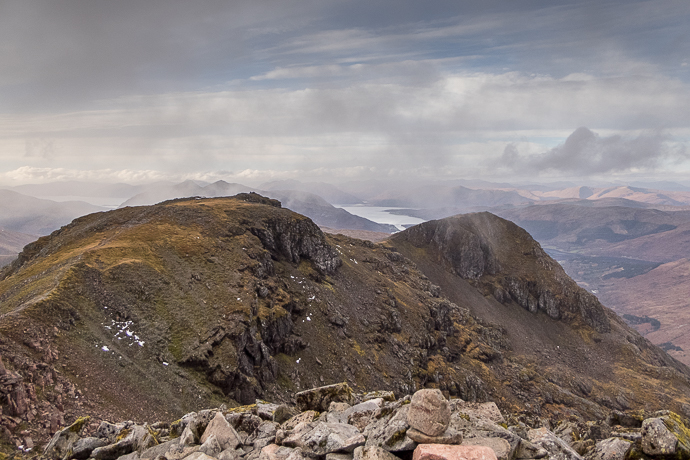 All that remained was to get down into Lost Valley and out before darkness. Bealach Dearg looks liked a steep and tedious scree surf, and didn't disappoint

After a while the steep scree gives way to steep soggy grass and greasy boulders. Literally every form of descent I truly can't stand. After an eternity, the path-proper is reached and pretty quick progress was made down the stunning Lost Valley. What a place, and definitely somewhere I'd like to come back to. 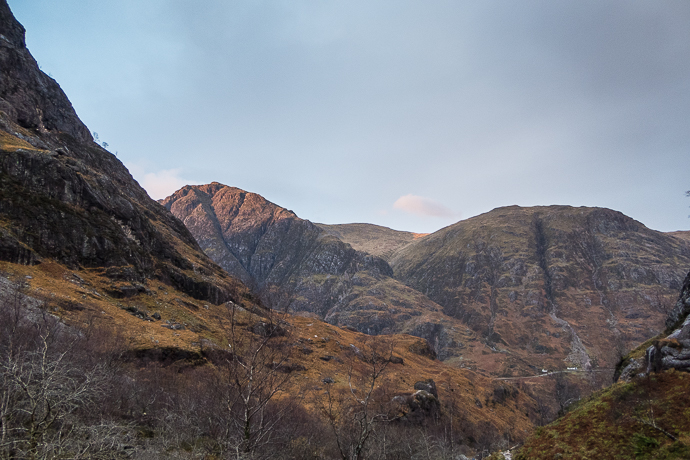 The interesting bit is actually trying to get out

The river crossing lower down looked dodgy, so we tried to cross higher up, an event looking like a cross between I'm a Celeb and the Krypton Factor's legendary assault course. After somehow managing not to lose either my kit or myself, we eventually made a path, joining up with Fife Flyer's group and made our way out, marginally beating the darkness.

Al and Robert were kindly given lifts back to their cars and we headed back to the bunkhouse for a few drinks. I had good intentions of a health vegetarian pasta-type dinner, but caved into a deep pan meaty pizza after about 2 minutes in a shop. The usual quiz then followed which we won, thanks to the Al and Dougie's knowledge of baby s***e and music respectively

Anyway, a crap sleep later and a ridiculously early start (by WH Meet Sunday standards) and we were off to tackle to first of the Am Monadh Dubh. Graham had arranged to meet with another hillwalking club on Sunday. It's a pleasant wee drive from Bridge of Orchy to the Victoria Bridge Car Park for:


BlackMount Track.gpx Open full screen  NB: Walkhighlands is not responsible for the accuracy of gpx files in users posts

This walk is a fine short-ish day. It starts from the Victoria Bridge car park, briefly following the West Highland Way, before heading towards the Clashgour Hut. The track then makes a couple of turns and a beeline for the two hills. There's an option at a wee cairn to either tackle to boggy mess to Stob Ghabhar first, or the good path to Odhair. We sensibly opted for the latter. The path to Odhair is marked further on by a cairn (which we missed

) then had to cut across up steep, wet grassy slopes to regain. From there on the path up is very pleasant, initially steep, then zig-zagging up the hillside. As height was gained, the views got better. 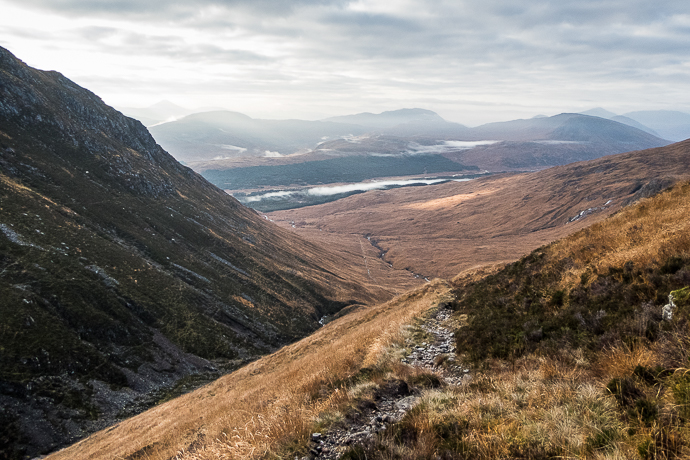 Looking back down the ascent route 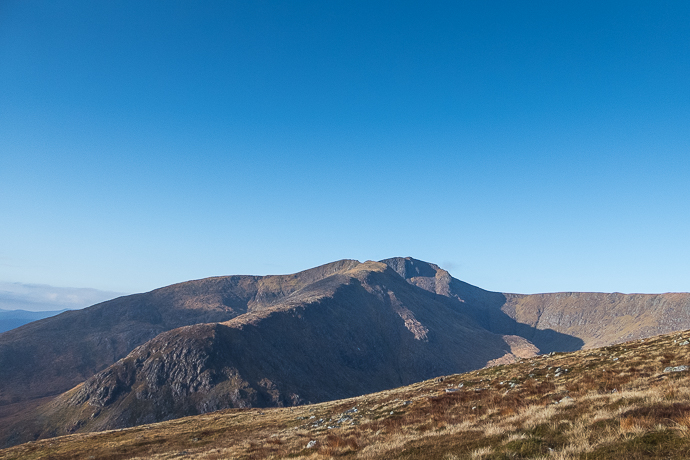 The gradient eases for the final pull up to the summit. The views from here across Rannoch Moor are superb. We stopped here for a good while to take it all in, have a bite to eat and take a few photos. 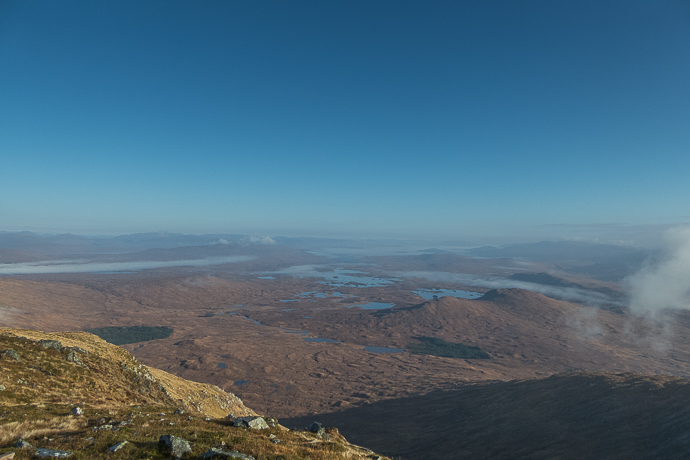 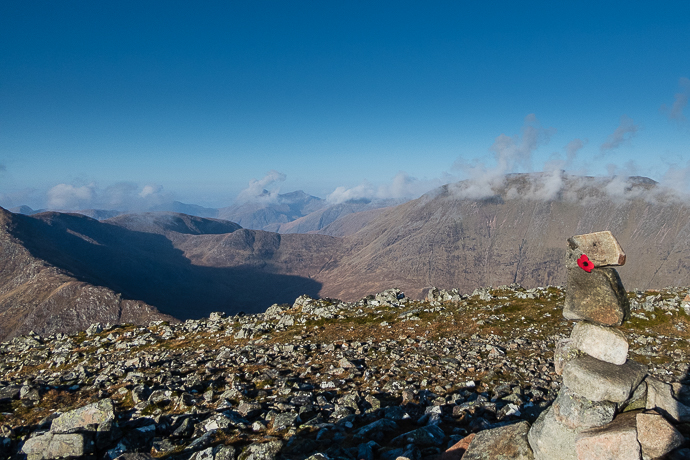 After a while we set off down to the Bealach. It's a fair drop to 632m with a big height gain, eventually to 1090. The ascent to Stob Ghabar's plateau is uncompromisingly steep and rocky in places, but steepness = good height gain and the plateau was gained fairly quickly. 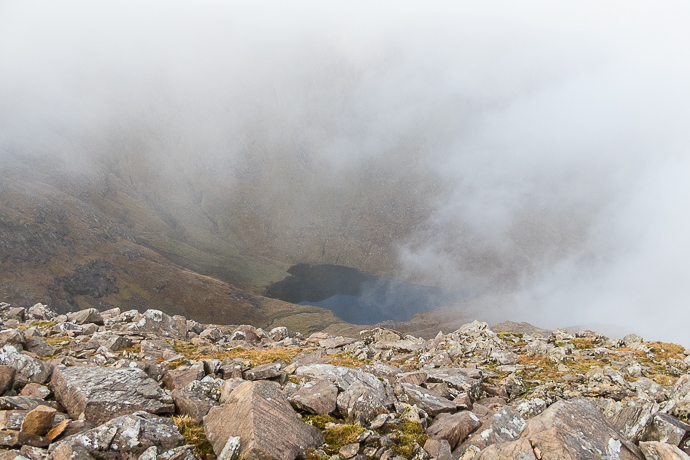 and we headed round to the summit. This route includes a fantastic wee arete, then sweeps round to a final gentle climb to reach the cairn. No views from this one due to the clag, but still a hugely enjoyable mountain. 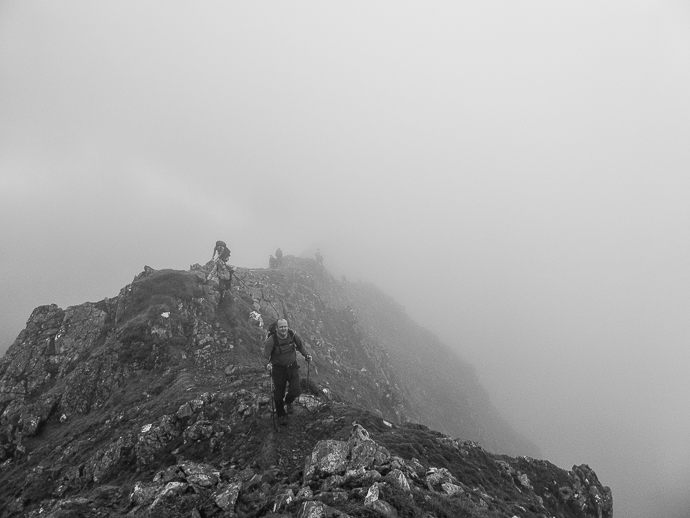 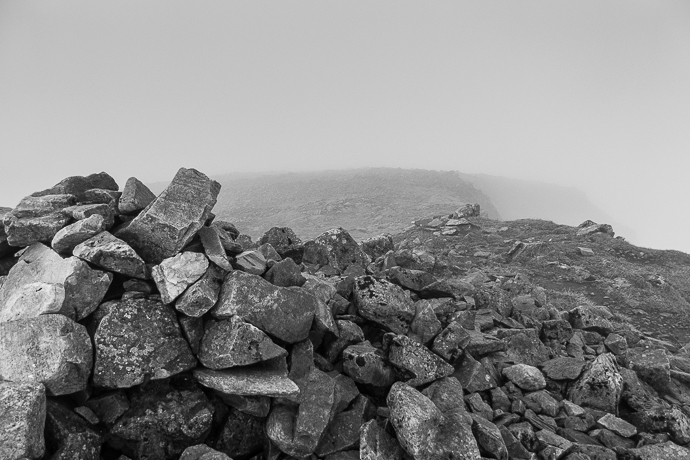 The descent involves retracing your steps. Just before reaching the arete section there's a marker cairn. The descent path is mostly descent initially, before degrading to a boggy hell at about 600 metres. Once dropping below the cloud, however, the views were again excellent. 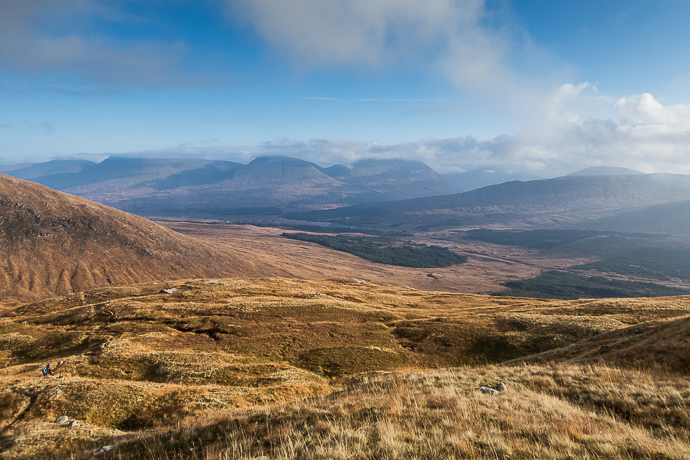 Just before the bog

The descent does however have a series of lovely waterfalls, which certainly make the boggy trudge a bit more enjoyable. 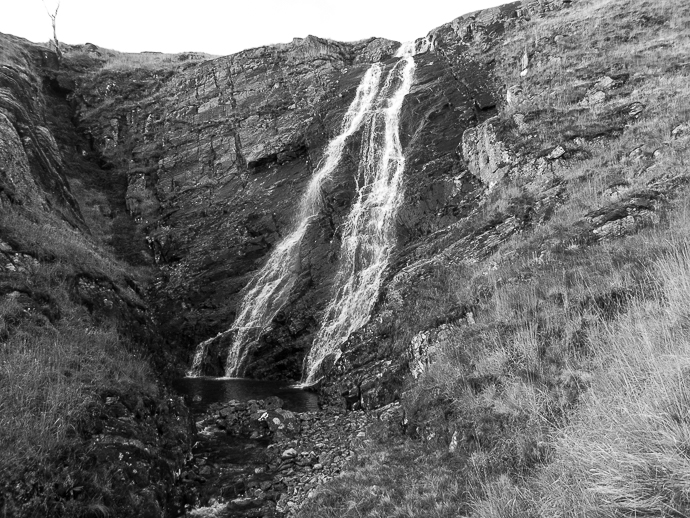 Once on the flat, there's another boggy stretch before crossing the Allt Toaig, which afforded a nice boot-cleaning opportunity, prior to a short clamber up to rejoin the main ascent path to both hills. From here it was a nice wander back out towards Clashgour hut, and eventually the car park, ending yet another fantastic WalkHighlands meet weekend. Great to see everyone again, and once again, a terrific job by Colleen and Barry

Great report JP which sums up the weekend, accompanied by your usual top notch photo's

The clag you had on the 2nd summit travelled across to accompany us too, luckily I had already taken photo's before it arrived

The clag you had on the 2nd summit travelled across to accompany us too, luckily I had already taken photo's before it arrived

Thanks Martin ... was experimenting with a wee compact camera. I'm fed up of carting the heavy DSLR up hills

Sunday was bizarre. Absolutely freezing in the Victoria Bridge car park, and we were removing layers and sweating buckets on the summit of Stob a Choire Odhair. Such a change from last November's meet

Great stuff there JP
We were really fortunate with the weather for the time of year, a bit of sun and cloud-free tops makes for great photos

Shame Anne couldn't make it but duty calls i suppose..
Good to catch up again, Barrie

Sure was a great weekend - walks, weather, company, the whole deal

tina bonar wrote:Great stuff there JP
We were really fortunate with the weather for the time of year, a bit of sun and cloud-free tops makes for great photos

Shame Anne couldn't make it but duty calls i suppose..
Good to catch up again, Barrie

Yeah she was a bit gutted. Another time though. Thanks again for sorting out a fab weekend.

Sure was a great weekend - walks, weather, company, the whole deal

Cheers Fi, was great to walk with you guys again.

Two great days out there

Very jealous, both slightly more interesting routes up those mountains than the ones I had taken, good enough reason to go back and do them again at some point!