. Even without the car for the weekend, I had ambitious plans which could be achieved on foot directly from the bunkhouse.

The trip down started poorly with a car crash on the A82 close to home threatening to close the road for hours, however it was cleared away fairly fast and all bus connections were made, resulting in an arrival in Tyndrum only 30 minutes later than expected (I had to forgo the chippy in Fort William though). Then beer and whisky and oblivion.

The usual meet bug struck on Saturday morning but I managed to wrench myself from the sleeping bag and get ready. With plenty of people heading to Bridge of Orchy and Glencoe, I saw an opportunity to cut an hour off my walk by blagging a lift to Auch - cheers Barrie and Colleen

Auch.gpx Open full screen  NB: Walkhighlands is not responsible for the accuracy of gpx files in users posts
Leaving the A82 at 8:30 am, an easy stroll down the glen allowed me to review my route choices. There were a couple of possibilities, but I was drawn to the steep face of Beinn a' Chaisteil - it looked like there would be a way up that.

Beinn a’ Chaisteil from Auch Gleann: 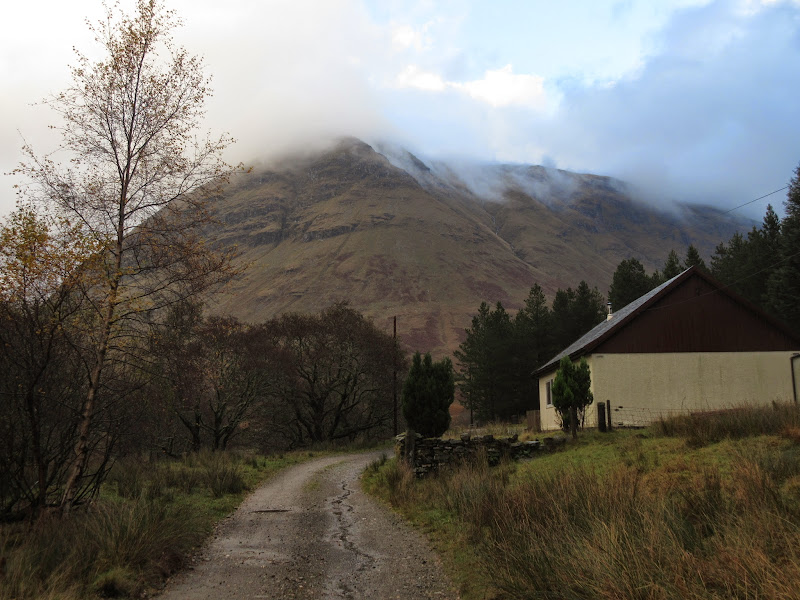 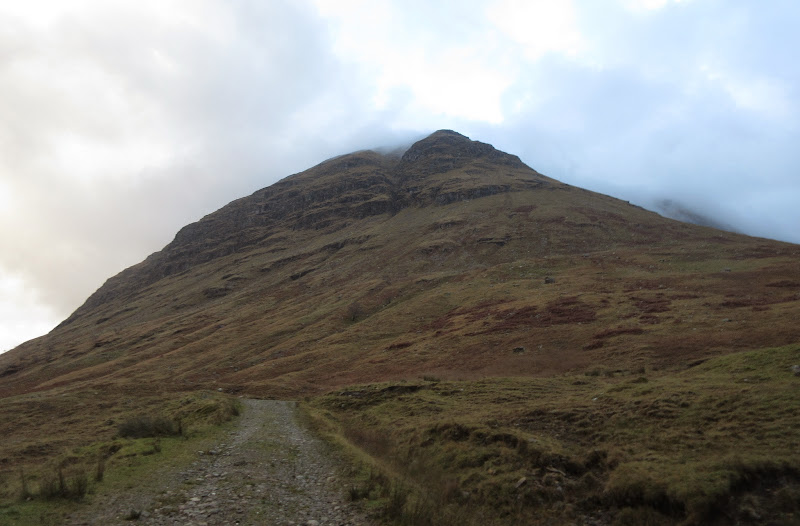 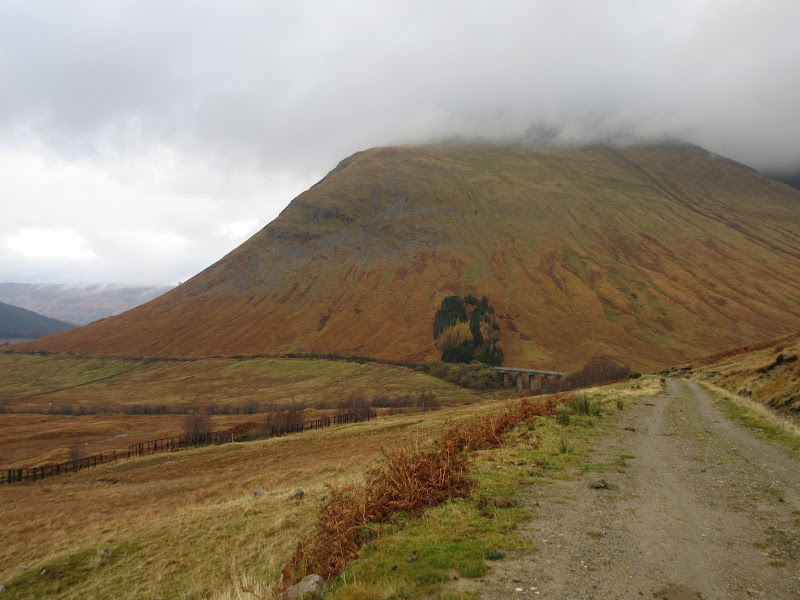 The rock by the track appeared damp and very greasy, so I looked for a line which didn't involve any scrambling. I went for the steep rib to the right of the Allt Choire Ghaothalch, which proved to be a really good choice. While brutally steep, there was short dry turf underfoot the whole way up to the summit ridge, and great aerial views back into the glen. Plenty of opportunity for waterfall and crag exploration too if the rock had been drier.

Route up Beinn a’ Chaisteil (to right of burn): 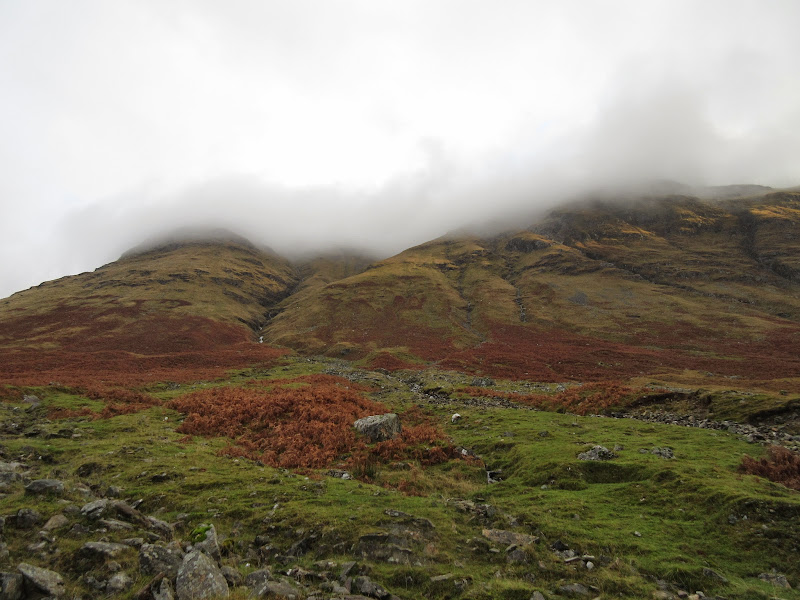 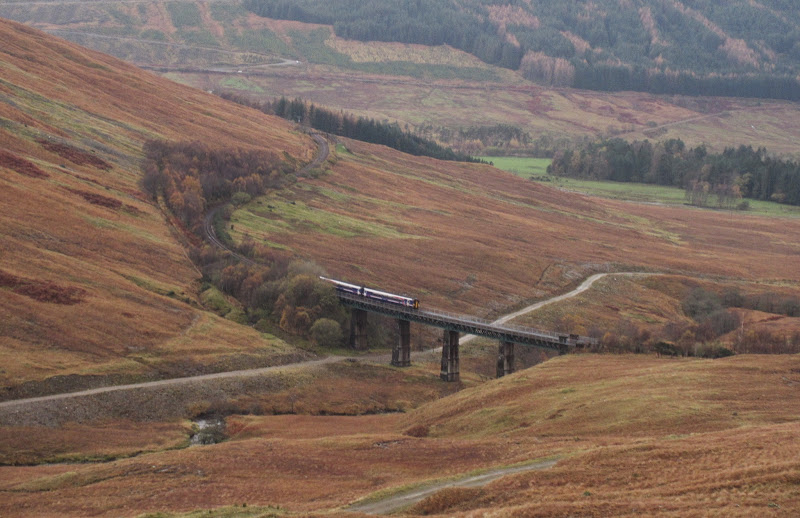 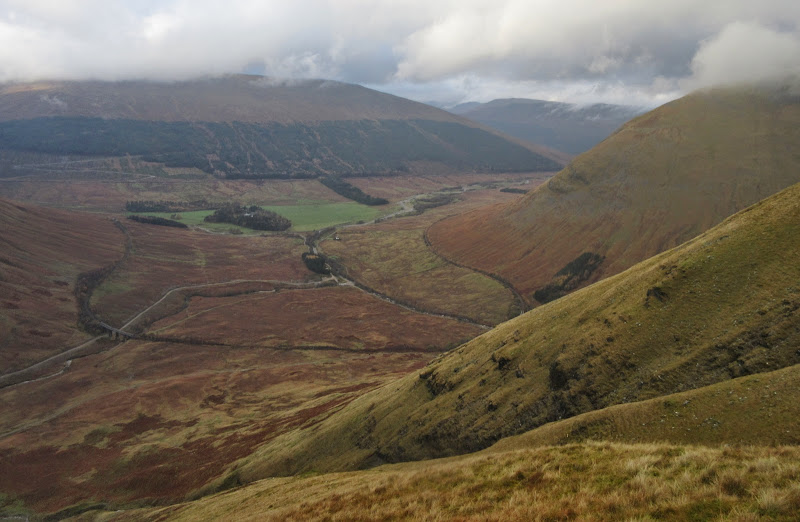 I joined the ridge a few minutes short of the summit, which was sadly just in the cloud, however it didn't take much of a drop down to get some views. There was even some sunshine on the back of the Bridge of Orchy hills.

Summit of Beinn a’ Chaisteil: 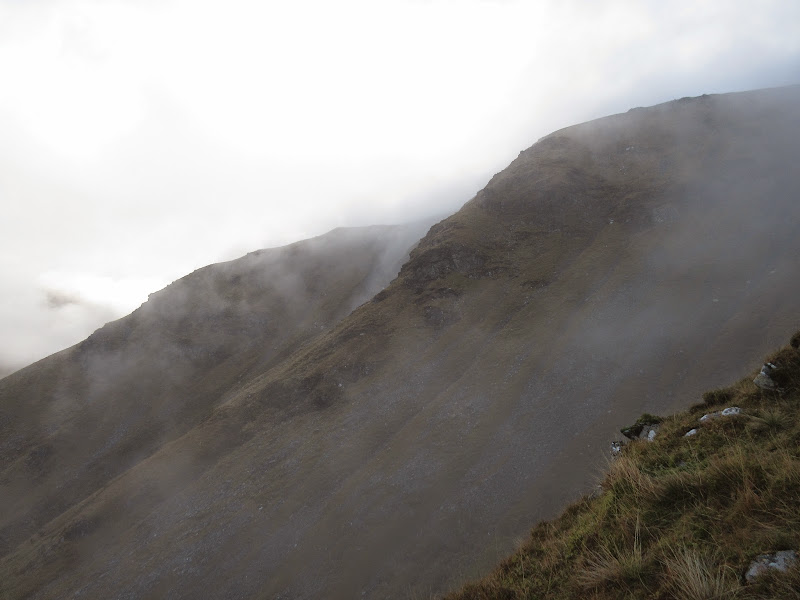 Although the col between Beinn a' Chaisteil and Beinn nam Fuaran was a little haggy, for the most part these hills were covered in short dry grass, and made for easy going. It was just down to the large drops between summits to provide the exertion. 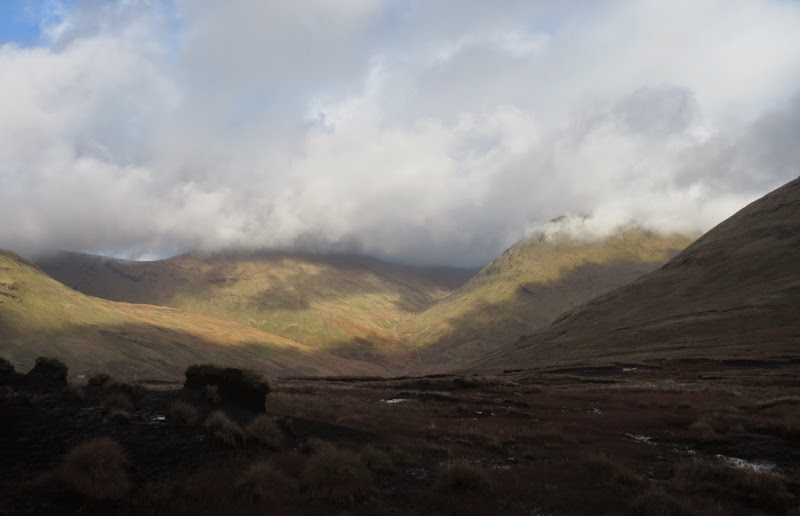 …and Beinn an Dothaidh as well: 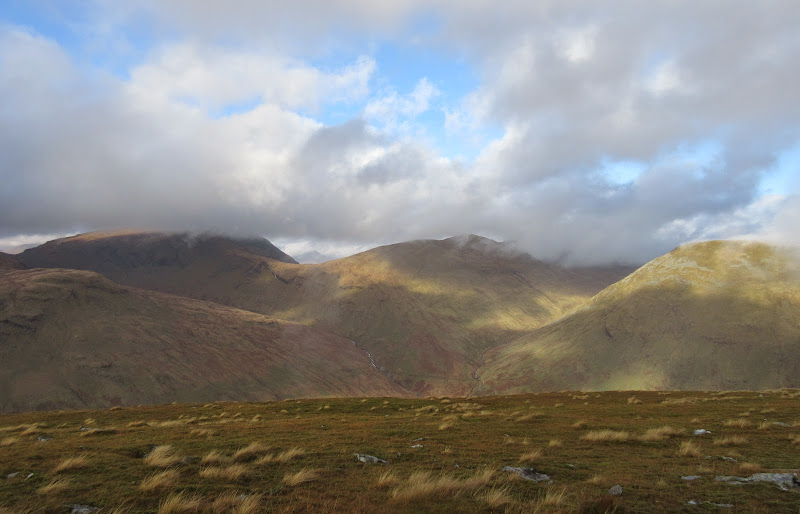 I had a break in the sun on Beinn nam Fuaran, which was clear and offered views down Loch Lyon. With no snow, these hills present quite a bland appearance, but there is also a feeling of remoteness that you don't get much in the southern Highlands - quite reminiscent of the west end of Loch Monar or Loch Mullardoch.

Now it was decision time. Stick with the Corbetts or take a leaf from Weaselmaster Al's book and include Creag Mhor? I rather liked Creag Mhor previously and it had a top I wanted so that helped the decision. The better-than-forecast weather sealed the deal. The crossing of the Abhainn Ghlas dampened the feet slightly, but the pull up to Creag Mhor was easy angled, following a corrugation between two of the many streams on that hillside.

The soft side of Creag Mhor: 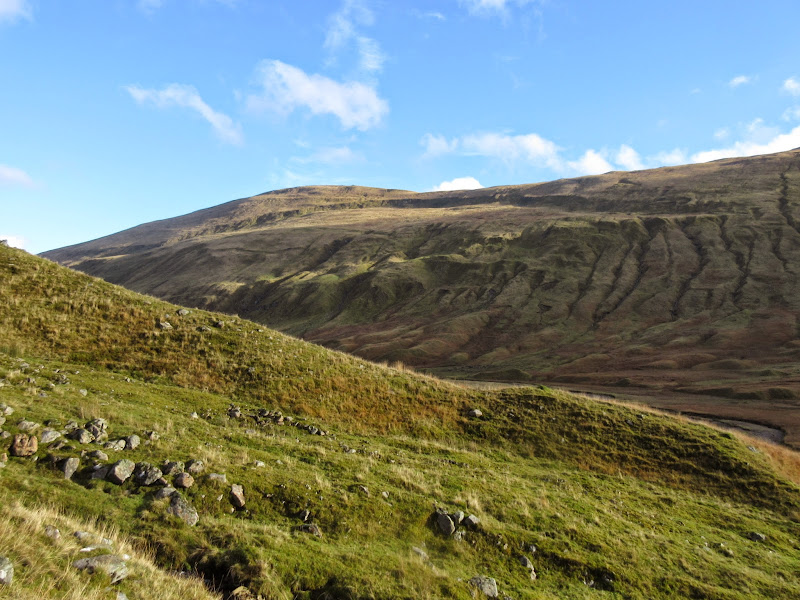 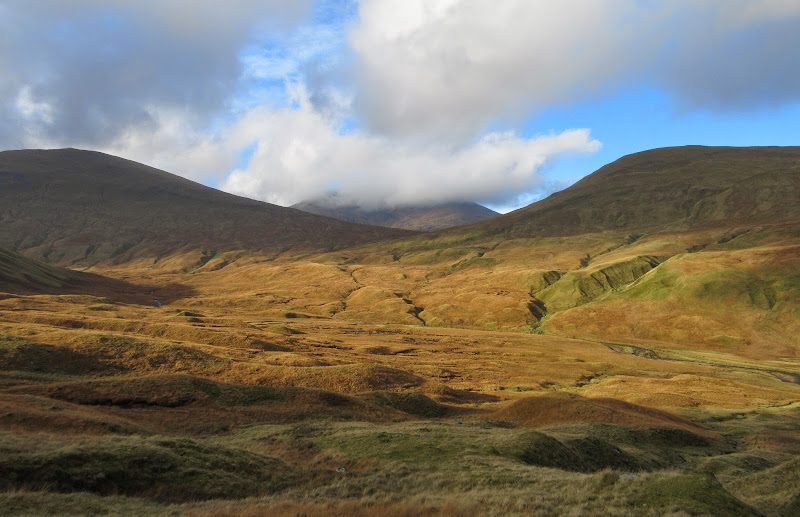 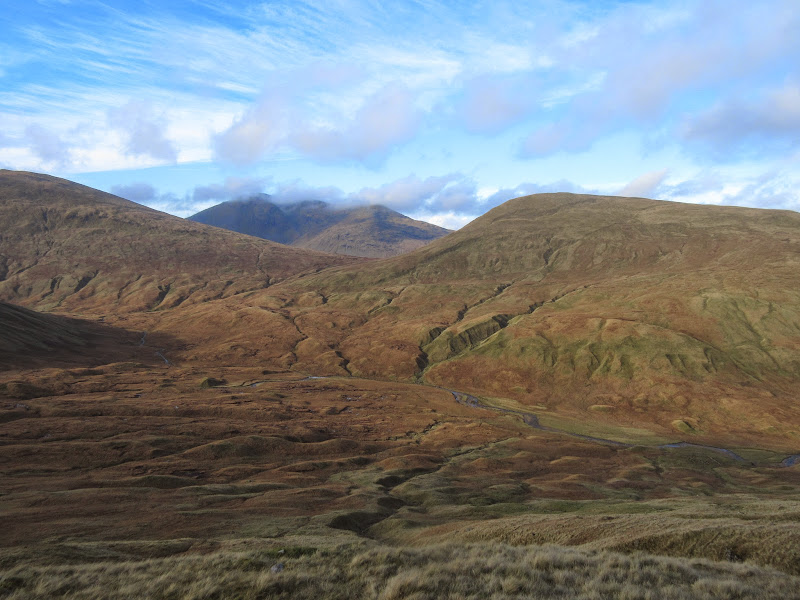 Again it was a slight disappointment to arrive on the summit in the cloud. This was the inverse of my last visit, when a claggy trudge through deep snow over Beinn Heasgarnaich and a step-cutting exercise up the final NE ridge of Creag Mhor had led to a sudden clearing of the weather. Still, on this occasion I dropped out of the cloud and enjoyed the craggy scenery around Stob nan Clach and Coire Cheathaich. Although quite a popular hill due to it's proximity to the central belt, I barely hear any mention of Creag Mhor. Definitely one of the more hidden delights of the southern Highlands. 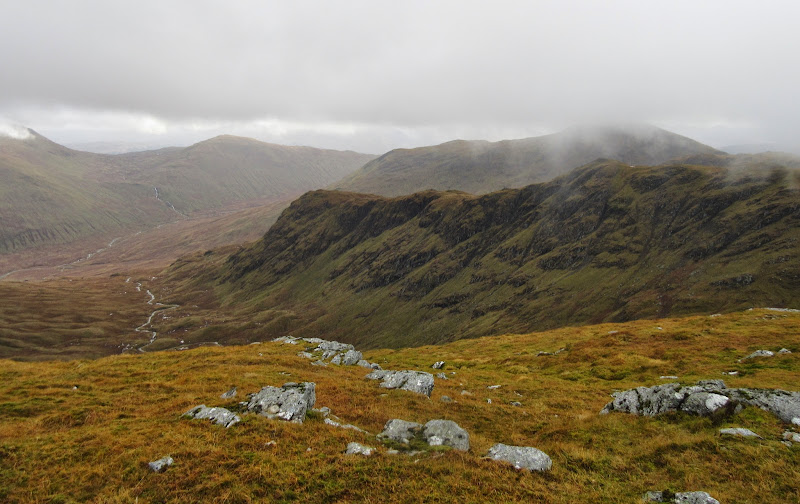 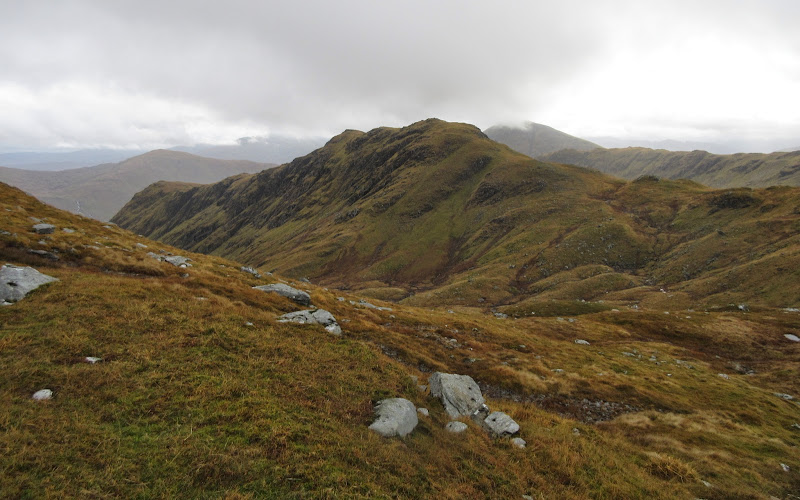 Back to Creag Mhor: 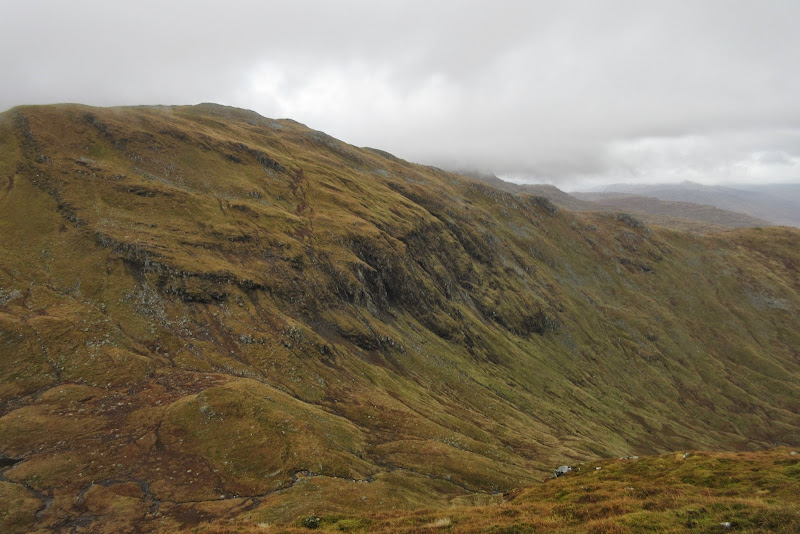 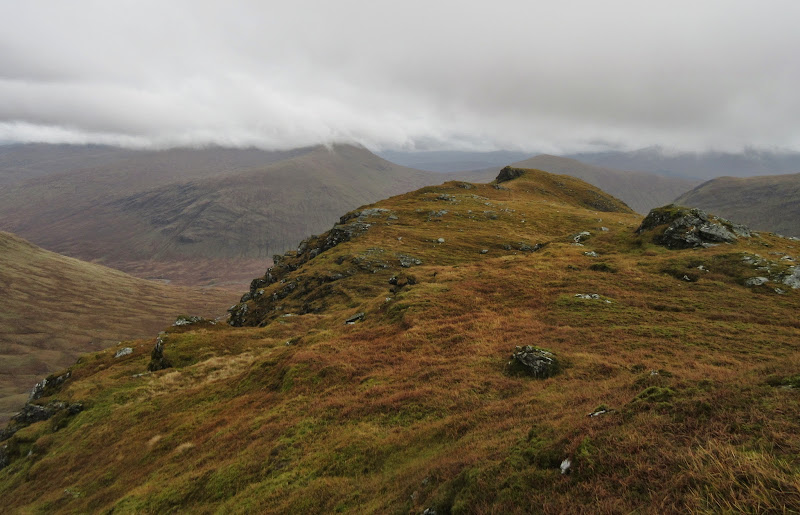 Greyer weather was moving in now but it was still nice enough. The climb back onto Cam Creag was one of the shorter ascents of the day. I briefly thought that the highest point was at the southern end of the broad summit ridge, but I soon decided that it was where the 884m spot height is on the map. 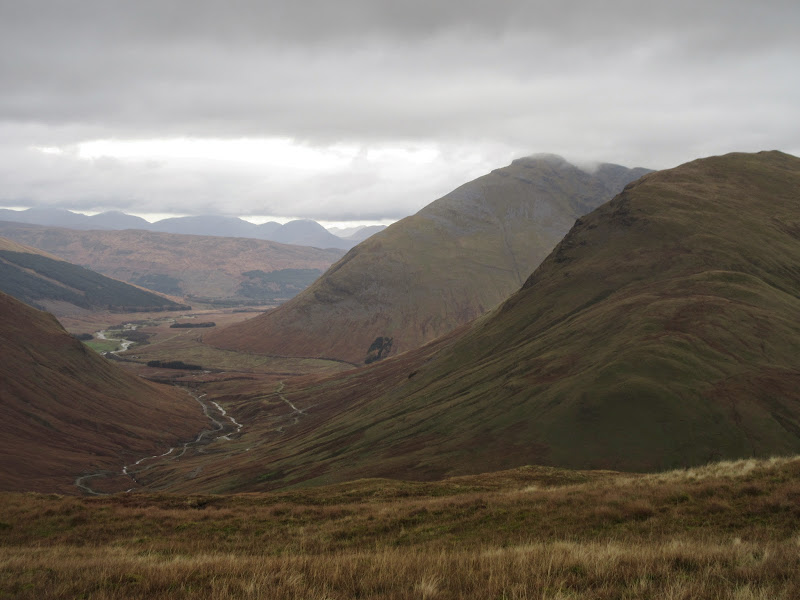 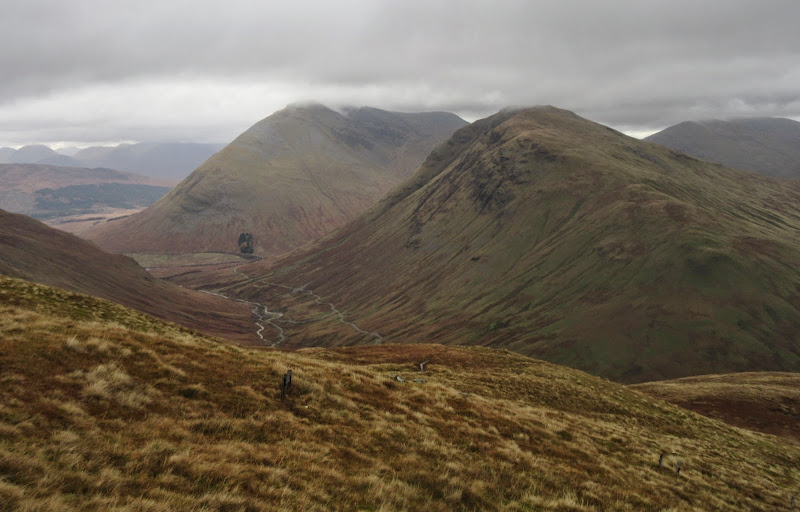 There was another fairly straightforward traverse to the only trig-pointed summit of the day - Beinn Chaorach, although there were a few more damp sections here. Looming in the background was Beinn Odhar - and it looked like a long, steep pull to finish the day on. 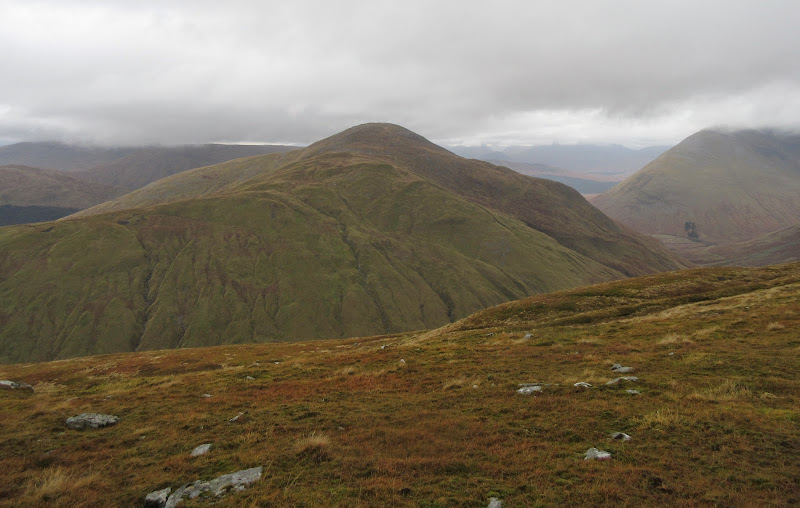 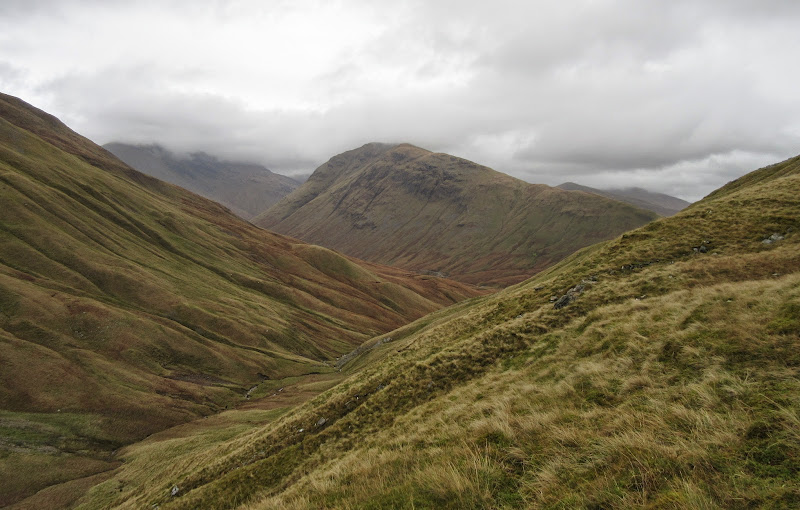 Before the last ascent, the descent of Beinn Chaorach was also very long and steep, with the bottom of the col not coming into view immediately. On the far side, short grass again made the going as good as it could be, and before too long I was at the tiny lochan on the SE ridge. The final 100m took me back into the clag, but not for long.

Descending, I was confused by the lochan I could see, even though I had taken a more westerly line. A quick look at the map confirmed it was actually a completely different lochan to the one I had passed on the way up! I was also treated to a feeble attempt at a sunset before following the S ridge steeply down to the West Highland Way. I made this in the twighlight, and had an easy return to Tyndrum to finish off the day. 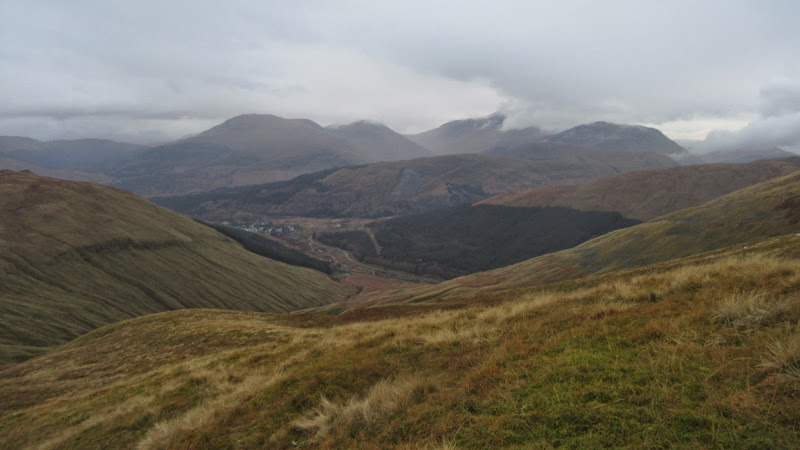 Slight touch of sunset on the way down Beinn Odhar: 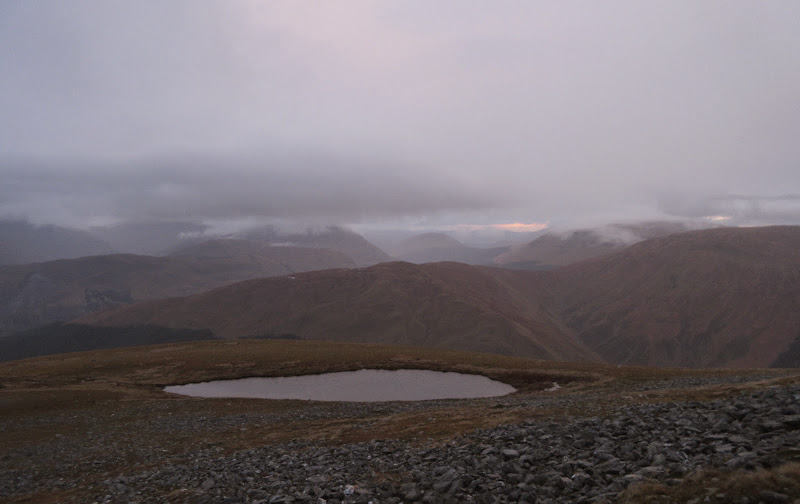 Big Big day after a hard evening before! Impressed

still got to do all these Corbetts, next year now

That's a chunky walk for this time of year ... even without an eventful previous night! Nice one.

I tagged a' Chaisteil and Fuaran when I was doing Beinn Mhanach, and although the corbetts aren't the most physically exciting, I quite enjoyed them. They were the highlight of my day! Your right about the feeling of remoteness. Sitting at the col between the corbetts does feel miles from anywhere.

Aye that is a fair hoof a bhalaich !

Creag Mhor is a grand hill and I have my eye on the Corbetts ....without a repeat Munro

No point in doing thing in half measures, that was some walk for this time of year

As Rod says especially at a WH meet

Not a bad effort, malky, given the night before even though you did get a lift part of the way

Hats off Malky! I said to Nathan on Ben Lui that I didn't reckon you'd manage the lot!

Good effort, this is a hard round and you added on a Munro but you got a lift, oh dear.

I bet Monty will be proud of you doing this round after a whisky fueled night.

Good solid trek there Malky there with lots of good images to illustrate the route.