I had heard for ages about threading the needle, Andy had done it years before and had explained the climb in detail as well as the Threading part, It had to be done, we arrived in Arrochar early and had boots on the ground by 08:00, driving round and into the car park gives you a clear view of the cobbler and of all I have tackled so far it looked to me really like something out a horror movie, slightly grey & black swirling with cloud, the only thing missing was bats & vampires..... we started the path and so far up we encountered the fork where you can either go left or right beside the bench, go right

from there it very quickly opens up giving you excellent views of what lies ahead. As we walked up through the valley the massive sight of Narnain engulfed us from the right and the ascent of the Cobbler was closing in on our left, was going to be an epic day. 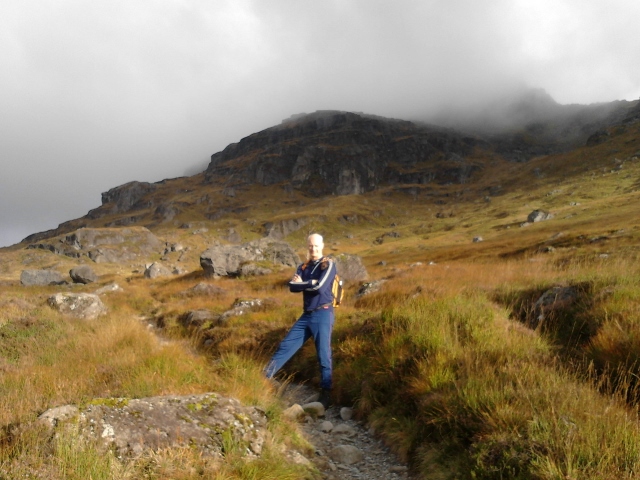 The climb up the Cobbler was outstanding allowing hands on rock so a bit of scrambling is always good to start off with, felt like we were climbing into a horror movie though, looking up it looks like the horns of an old Viking helmet. By the time we got to the top the wind had picked up however I hadn't came all this way to leave without threading the needle, an ancient test of bravey for young men stepping into adulthood...... so it shall be said, so it shall be written, so it shall be done. Job done, we were now looking at a quick descent and a jaunt towards and up Ime, This was one Andy had called his nemisses, he had wanted to nail this one for many years yet for many different reasons never got round to it, we started the climb up only to climb into rain and cloud, at this point we thought the rest of the day was loing to be a wash out, we would make a call at the top as to wheather we attempted Vane & Narnain or do we let the weather beat us......., we climbed and eventually reached the summit, the rain had stopped so we chilled for a bit and toasted the mountain as is our thing, nothing like a dram at the top. After a short break we decided to descend and make a decision at the bottom to either make our way back or continue up to the summit of Narnain, the lower we got the clouds began to clear and left us with a big yellow circle in the sky..... decision made The sun was out in full now and the clouds were gone, Narnain was now the target, time was against us so we decided we would come back for Vane another time. We were lucky enough to summit Narnain in the best of weather, the climb was well marked out and the route up was covered faster than we had expected. The views from the top were outstanding and it was time to chill, grab some lunch and some pics. Time for the descent, we decided to go down the opposite side from where we ascended which was looking pretty steep with some section where hands on rock was required....some last pics before we had to put the cameras away and concentrate on where we were putting hands & boots [attachment=0]4 (378x504).jpg[/attachment
An epic day, by the time we got back to the car we were done in, al I could think about was a shower, beer & some good pub food, after a short phone call to the wife we had agreed on the pub and the time........ thats what you call a good day in my book Cheers PA
Totally agree with the climb up Ime, boggy and quite boring lol but all in all a great but tiring day out