How I had gotten to this point in my Munroing career without doing Ben Lui was a bit of a mystery to me, not to mention to many of my fellow walking acquaintances, so the Tyndrum meet seemed like the ideal opportunity to do something about that. Early November should afford just about enough daylight hours to grab what the SMC book calls "one of the finest mountains in the Southern Highlands" with "an Alpine character" as well as the little less vaunted Beinn a'Cleibh next door without having to resort to head torches.

Nathan had similar ideas and so after a relatively tame Friday evening by WH meet standards, we set off from the bunkhouse just after 9am. No need for vehicular transport at all for this one - just climb up the steps to Tyndrum Lower Station, nip across the level crossing and onto the track that rises and then descends through the forestry on the eastern and southern flanks of Sron nan Colan before emptying you out into Glen Cononish about a click and a half short of the farm. 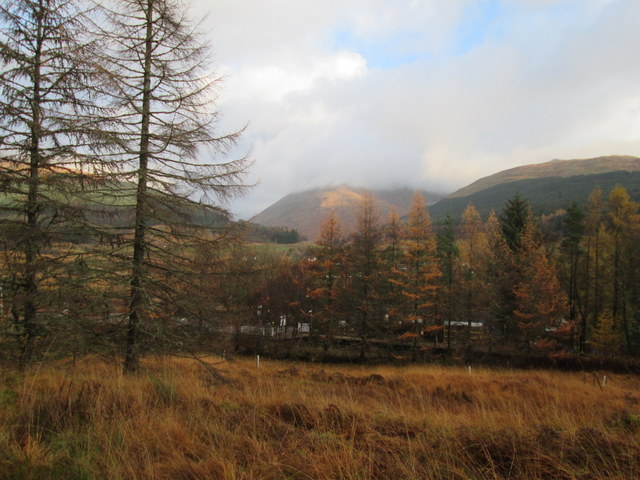 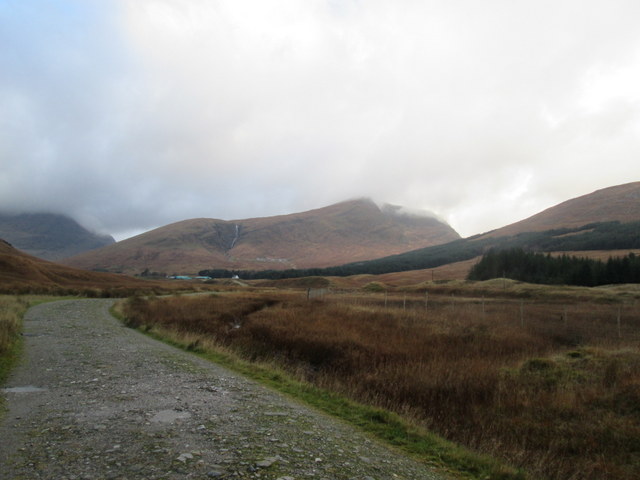 Beinn Chuirn above Cononish Farm, Lui lurking in the background

It was a straightforward yomp along the track to its sudden termination at the Allt an Rund crossing below the yawning jaws of the great north east coire of Lui, Coire Gaothach, during which time Nathan regaled me with tales from this years Chamonix trip. I was not one bit jealous! Lui from near the end of the track

This would be my first serious undertaking since the 16 hour epic on the Beinn Dearg hills in July, so I took a deep breath or two before beginning the climb up into the coire. I needn't have worried too much - clearly the outing with Kev on An Dun a fortnight or so ago had taken the edge off my lack of recent hill time. 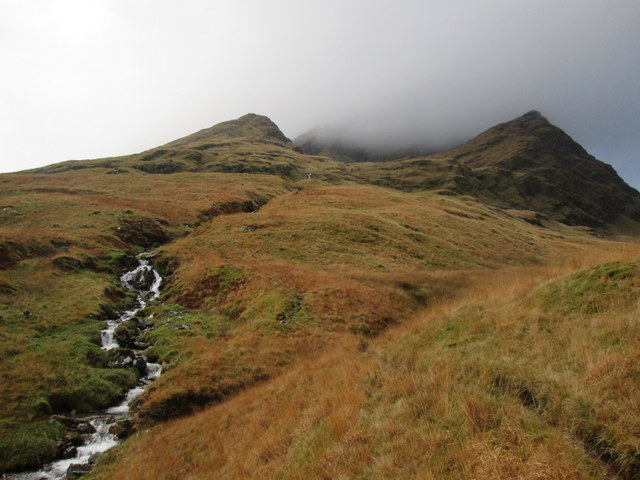 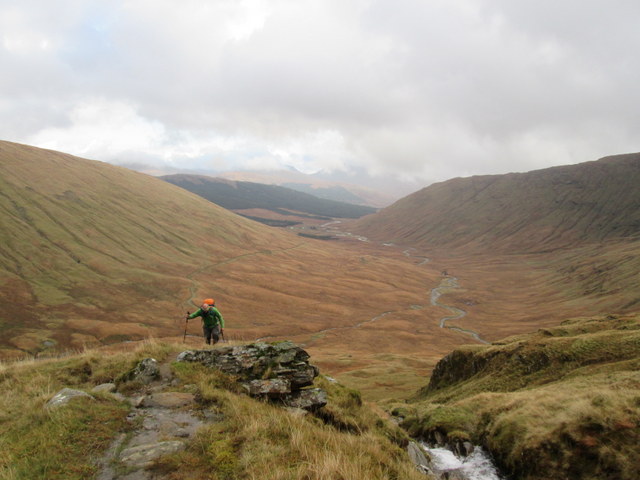 We tracked upwards beside the stream that comes out of the coire, Nathan seeming to be exhibiting even more hill rustiness than myself. My quiz for that evening, and in particular the song lyrics round, was in my mind and for some reason the Kaiser Chiefs song Ruby (not one of the lyrics although another KC song lyric did feature) got lodged in my mind, but with Ruby being replaced by Lui!

Two walkers ahead of us were preferring different approach routes in the higher reaches of the coire - one was heading right up onto Stob Garbh while the other seemed to prefer a more direct approach up the headwall in the far left hand corner of the vast coire. We opted to follow in the footsteps of the former. Cloud clearing a bit over the coire headwall 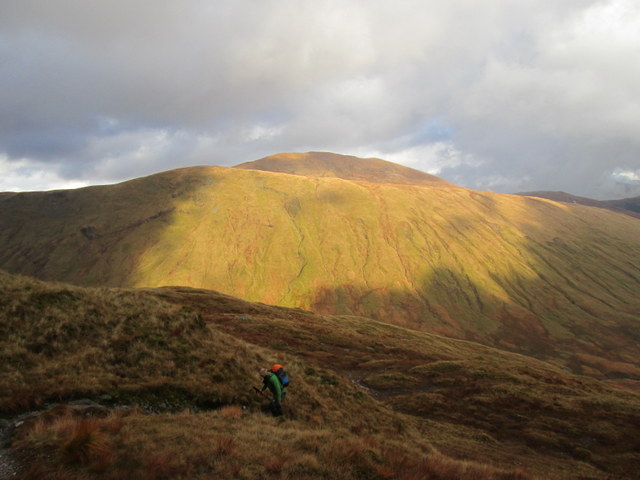 In the heart of the vast Coire Gaothaich Back down Glen Cononish 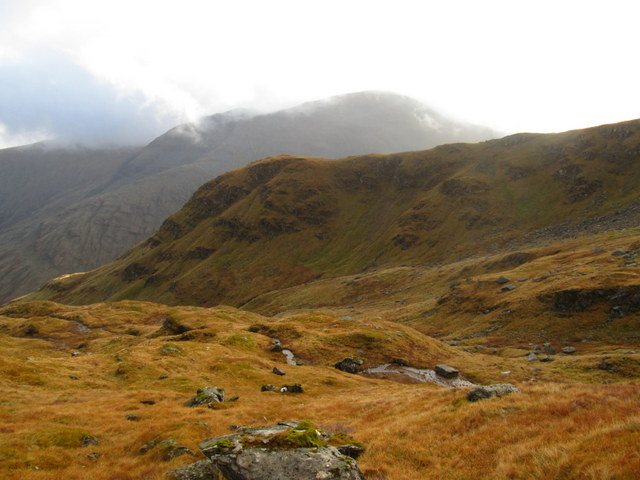 Climbing up onto the Stob Garbh ridge

Once onto the Stob Garbh ridge above the wee lochan, it became pretty clear that the sun, which had been fighting a valiant battle all morning against the cloud, did not have the strength to see it off and was doomed to failure. Oddly enough, I was not at all unhappy at the current state of affairs. Despite the lack of expansive views, it was a wonderful walk and the swirling low cloud merely added to the atmosphere. Mythical was the phrase Nathan used. Perhaps he should have taken it a bit easier on the whiskey last night after all! 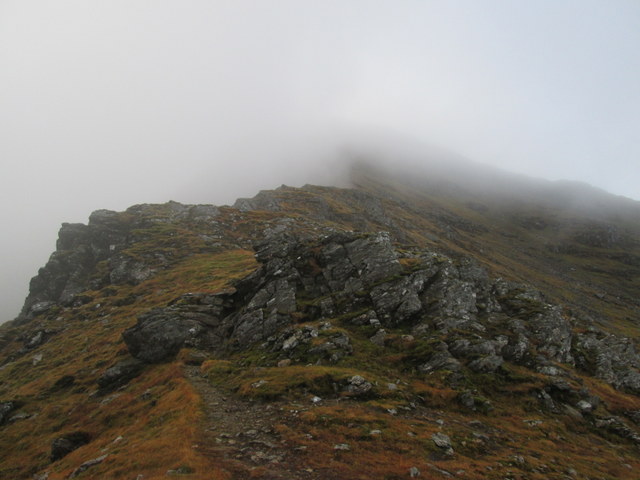 Clag closing in on Nathan Near the top of the Stob Garbh ridge 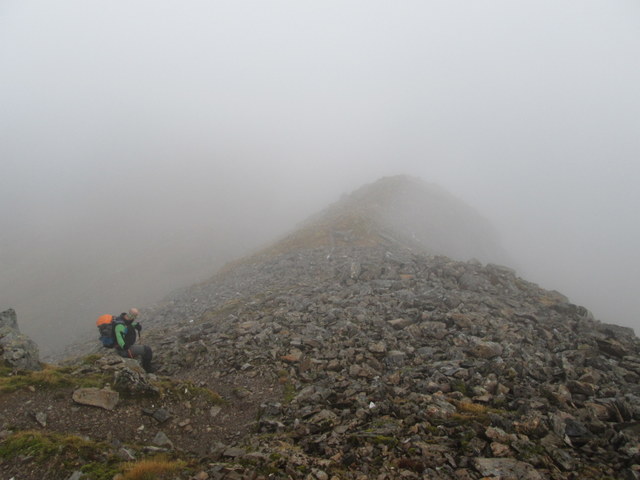 Nathan reaching the apex of the ridge

We met a couple coming off the summit just before the last pull up to the north top and they told has they had got Brocken Spectres at the summit. It certainly felt like a day for them. 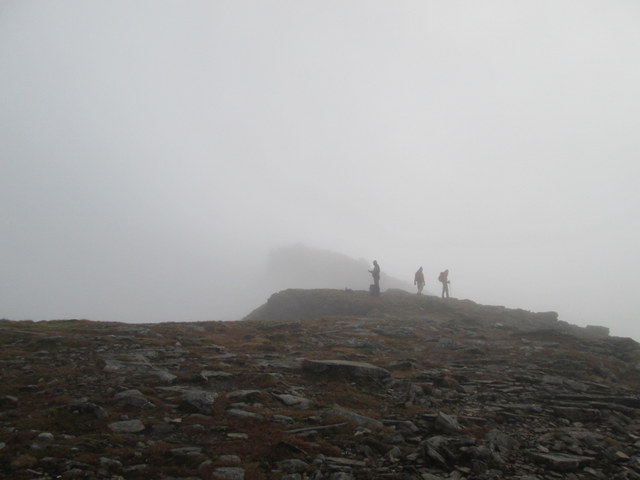 Figures at the North Top Sadly no Brocken Spectres were seen at the summit - only two Spanish blokes who were huddled amongst the rocks for shelter. To my knowledge this is the first time I have shared a Munro summit with Spaniards. Not a breed one often tends to come across on the Munros in my experience. Things were so clagged in now that we didn't even see the massive blue bird indicated on my OS sheet! 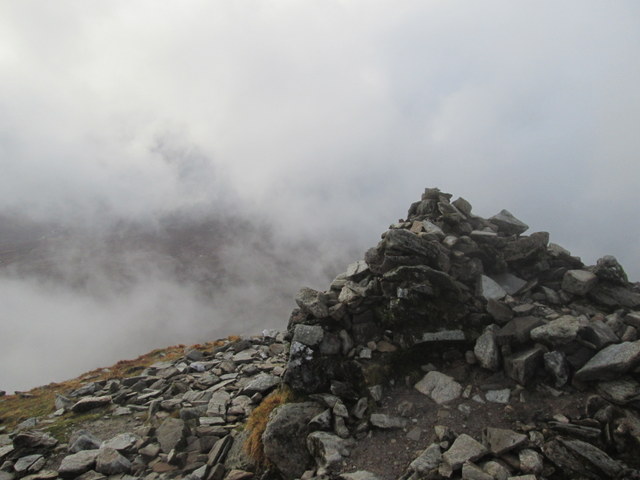 Summit of Lui perched precariously on the cliff edge We managed to find a reasonably sheltered spot for lunch but it was still bitter and Nathan in particular got a severe chill in his paws by the time we packed up and headed off to try and pick up the path to Cleibh.

The best of the day was now clearly behind us, in terms of the walk itself and the weather. Little was seen of Cleibh itself, except for a few fleeting glimpses of the norther flanks falling away towards Glen Lochay. 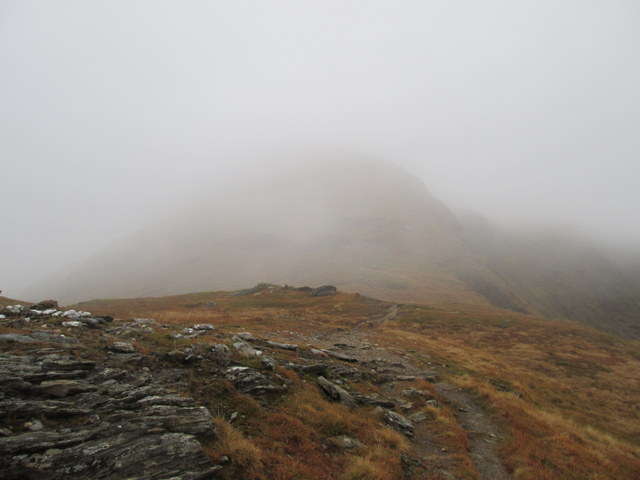 Beinn a'Cleibh rising out of the cloud After a quick photo or two and some more jelly babies at the unremarkable summit, the lure of cheesy chips and beer had us retracing our steps back towards Ben Lui for the long descent back into Glen Cononish. 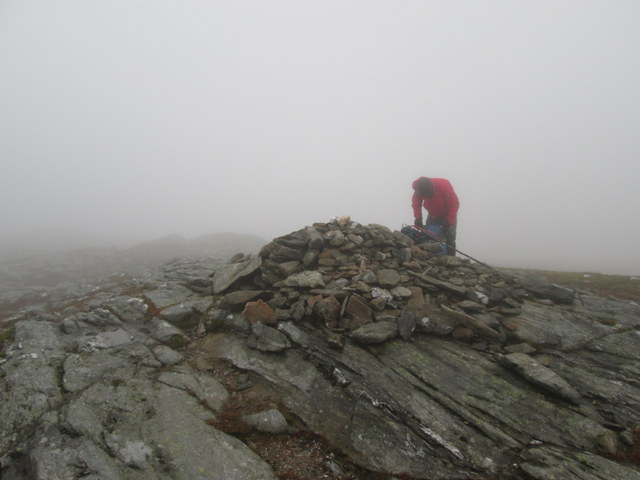 We missed the descent path back down onto Stob Garbh (too busy looking for that enormous blue bird again!

) but it wasn't an issue as it would allow us to drop down behind and to the north of the Stob Garbh ridge for the descent back to the Allt an Rund. It was an awkward descent with some craggy and slabby sections to negotiate before we reached the relative comfort of the track which carried us back to Tyndrum and our cheesy chips and beer, just in time to avoid the need for the head torches.

Like you (but now you have!) I've not done Ben Lui. Back in Dundee days (pre 2001) I was all set to take the route you did as my pal said it was the only way to appreciate the grandeur of this beautiful mountain. We posh camped at the wigwams and set off with a bunch of Chinese folk but it was chucking it down and about half way in everyone was soaked and we decided with regret it wasn't fair to subject them to a bad experience which would probably put them off for life.

Have talked about having another go but so far have never pulled it off. 2015 maybe?

Certainly a far better approach than the forest of mush from Glen Lochay.

Nice one Graeme, shame the clag hung around

Interesting how you were so far ahead of Nathan, having said that his rucksack did look on the large side

We went up Beinn Odhar at the same time & were sweltering on the ascent, the clag came in after we reached the summit

Nice report. The one in front could have been me

Had some views from Lui but clag needed to be a few feet lower, blue sky above my head

Yeah, we did wonder whereabouts you were Dave! Which route did you take?

Hope your knee sorts itself
See you at next meet.

Sorry to bring back bad memories there Willie!

Great report, shame about the weather

, I'm relieved to see others get music stuck in a brain groove when out on the hills

Couldn't believe it when you said you hadn't been up here before! Shame there were no views but it's handy enough to go back to.

I remember a few Spanish guys passing through the university mountaineering club in Dundee. Not to generalise, but I don't remember a single one who fully bought into the concept of going up hills in the pizzing rain

Smashing report. I did the left hand exit out of the corrie,,,half by design and half by ,,"oh well,,missed the right hand turn, might as well keep going" method lol