So... where to go to make up for our recent visit to Canisp - the mountain I had insisted on climbing (what?)? How about we go to Handa Island, I said. I described the details of this from what I had read on the Walkhighlands website and both my wife and Jonathan seemed very keen to go. I knew that my wife is very interested in birdlife and this helped to make my suggestion much more appealing, despite the fact that I knew it would take an hour to get there.

We drove along the north shore of Loch Assynt and turned left at Skiag Bridge, admiring the different and magnificent slopes of Quinag as we passed it by. We then started to descend towards Loch Glencoul and took the opportunity to admire part of the Moine Thrust, which I had recently discovered through a book that my older son had bought me (he is studying Geography and Geology and therefore knows about these kind of things!). We soon arrived at Kylescu Bridge, a truly magnificent piece of construction work stretching over Loch a Chairn Bhain. Heading north through Lower Badcall and Scourie we eventually arrived at Tarbet where we parked the car and waited to catch the ferry. It took a few minutes to arrive and this gave us a chance to talk to the young woman who sold us the tickets. It turned out that she was Latvian - which seemed quite unusual in these parts of Scotland - and was staying here for the summer months. She had some unusual ideas on how to establish and protect Scotland's Wolf population(!), which I wasn't so sure about, I can tell you!

Eventually the ferry arrived and we boarded it - but not before seeing an Eagle flying majestically past us. Alas, it was flying too quickly to take a photograph of it, so instead here is a photograph of the ferry! Handa Island, as many of you may know, is run by the Scottish Wildlife Trust and we listened to a very interesting talk on the birds and fauna of the island given by a member of the Trust. This left us free to walk the island, a journey that would take approximately two hours. Before we left to go we were warned that the Puffins had usually flown and left the island by this time of the month. However, as will become clear, the Puffins were still there - as too were the Great and Artic Skuas, Common Terns, Guillemots, Razorbills, Grouse, etc. The remarkable thing about these birds is how close you are allowed to walk amongst them - but not too close, obviously! It wouldn't pay to be dive-bombed! We eventually arrived at the Great Stack and it was here where we saw the Puffins. Unfortunately, you cannot really see them in this photograph but they are there, I assure you! Not being too keen on heights this is the best photograph I could manage. After having lunch surrounded by Great Skuas (without being dive-bombed, fortunately) we then completed our walk around the island with some of the most marvellous weather and scenery imaginable. 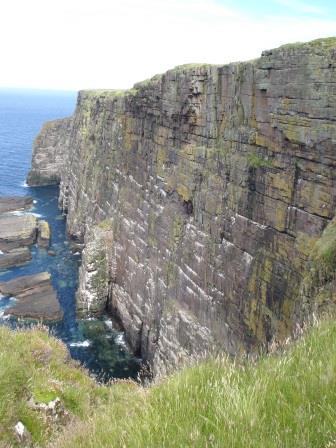 The western side of the island. Home to lots of Guillemots. 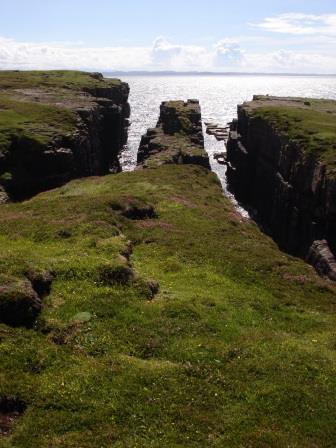 Heading east once again, we could see Arkle and Ben Stack, a shapely pyramid of a mountain. And, of course, the beaches with their white sands set against the backdrop of the rugged coast. Heading east once again along the boardwalk with Arkle and Ben Stack just visible to the right. Looking east with the white sands.

We arrived back at where the ferry was due to meet us. Unfortunately

there was insufficient room on the boat so we had to wait for a further half an hour just sitting on the glorious sands until the ferry returned to collect us. It was hard but someone had to do it! Waiting for the ferry.

After pausing for a drink at the café we returned to our holiday home but not before travelling through the magnificent Duartmore Forest and stopping at the Kylescu Hotel for some very nice Fish and Chips, watching the sun come slowly down the loch-side mountains.