I had been fighting against unreasonably high expectations before this trip started - my previous September trip had been such perfect weather, and such wonderful walking - great moorland distances - that I couldn't quite believe this wouldn't be the same, although I knew it was a very different set of hills.

The train decided to start disillusioning me quite quickly, and landed me at Oxenholme about 10 minutes too late for the Windermere connection. I considered carefully the merits of hanging about on the platform for 45 minutes, and walked up to the pub for a half, along the very dark road.

Finally in Windermere, I had about an hour to kill before getting the last bus to Grasmere - I'd mean to go for a proper meal, but it was too late for anything but chinese, which I didn't really fancy - I went to the Co-op instead, and then for the second half of the pint, before accidentally catching the bus on its way down to Bowness instead of its way back up. I landed in Grasmere well after 11, but I'd kindly been given a room to myself so I couldn't disturb anyone else!

And then despite my dreams of wide clear skies, I woke up to a grey morning, and came out to find the hills vanished into the mist.

I had never meant to have a particularly early start, because I wanted to prowl around Grasmere, but it turned out a bit lazier even than I'd expected. I pottered round the shops, and down to the church, and up to Dove Cottage, and back by the river, and it rained a bit, and I went for coffee, and then clouds stirred a bit, and then suddenly Stone Arthur was visible, and it seemed like I might see something of the hills after all.

I walked up the road to the famous Swan - I'm not sure what it's famous for, apart from being famous - with the clouds lifting fast, so that I got my first clear view of Helm Crag, and then of Loughrigg. 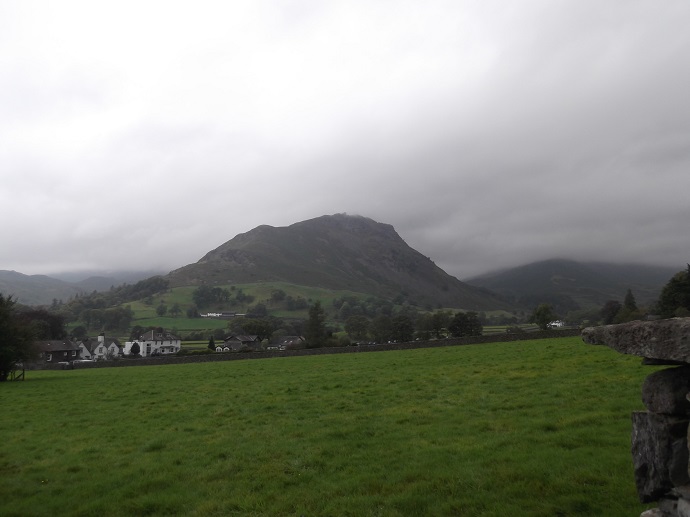 At the top of the lane above the Swan, the burn is crossed by two separate bridges, although there are so many rocks in it that it doesn't need a bridge at all - but the path I wanted turned away from the bridge and led up through the bracken, then headed up as stone steps beside the forest wall - a steep pull up, and quite warm work. Above that it leads around the hillside to meet the end of the ridge coming down from Stone Arthur, and heads up again. 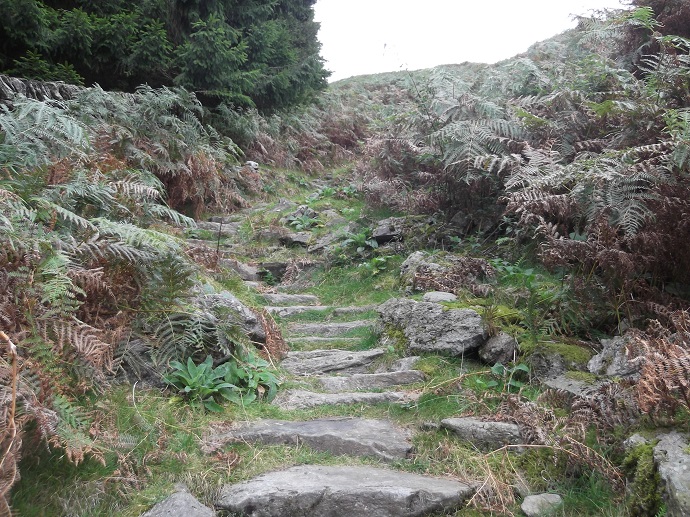 Living on the east coast I'm quite used to mist, and once it started to move I'd thought there was a good chance the sun would be splitting the sky by lunchtime - it wasn't quite, but the first blue sky appeared about 1, and the hills were still clearing steadily. Looking back over Grasmere

Stone Arthur is one of those ridges without any very definite highest point - the first rocky place was the best, a nice eyrie to look over Grasmere and the central fells, and seems to be Wainwright's summit. 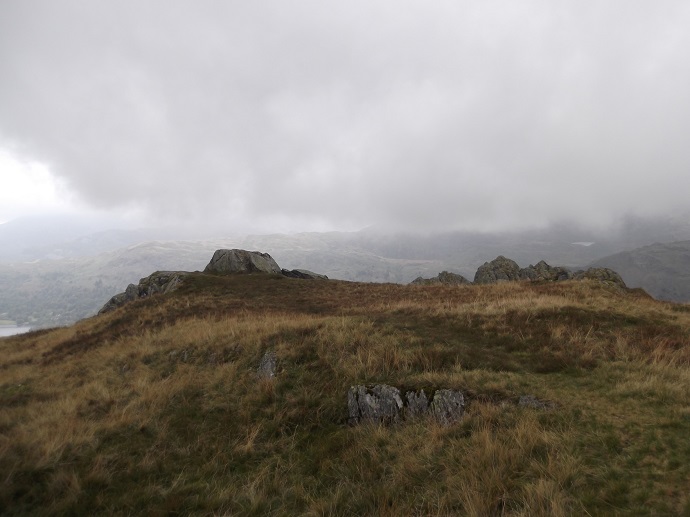 The second rocky outcrop, rising above without much of a break, was another nice castle to be king of; the third had stopped being Stone Arthur and started being simply the slope up to Great Rigg.

The clouds were still spilling over the hills to the west, but they were now definitely shapes of clouds in between patches of sunshine rather than blobs of mist, and even the western skyline was clearing. I was so fascinated turning back to watch it emerge that after a while I gave up and sat down facing west to eat my lunch. It was gentler grassy slopes from then on, until I came out onto the main ridge, with a view back along it, and down into Rydale. From there it wasn't far to the top of Great Rigg, which had a nice big cairn, and good views all around. I hadn't really intended to go any further, but with time in hand and the day improving I couldn't resist pushing on to Fairfield - I felt I hadn't really appreciated it properly when I was there before!

I can see why Fairfield is considered a dangerous place, although it's so flat and apparently gentle - the paths just run out as you get near the top, and leave you in a great wide featureless sea of stones. On a clear day it was a lovely place to prowl around - the two shelters, and the edge of the cliffs to the north, and the start of the path down to Cofa Pike, and then the path I knew down to Grisedale Tarn, and a long way back over the grass to meet the path back down to Great Rigg. Fairfield cliffs and the far east 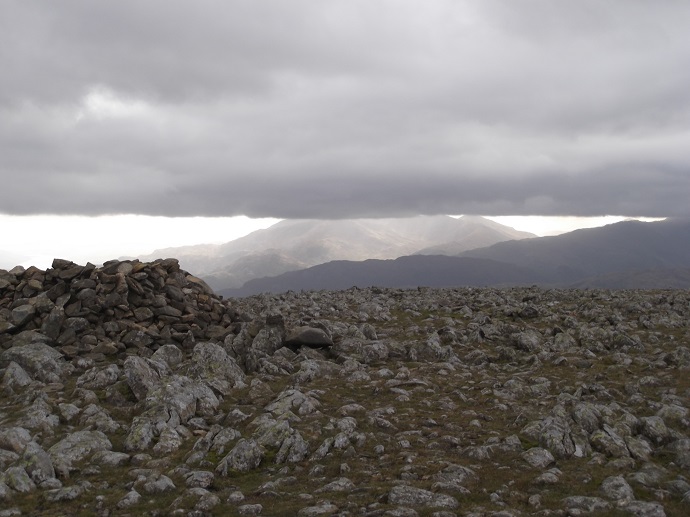 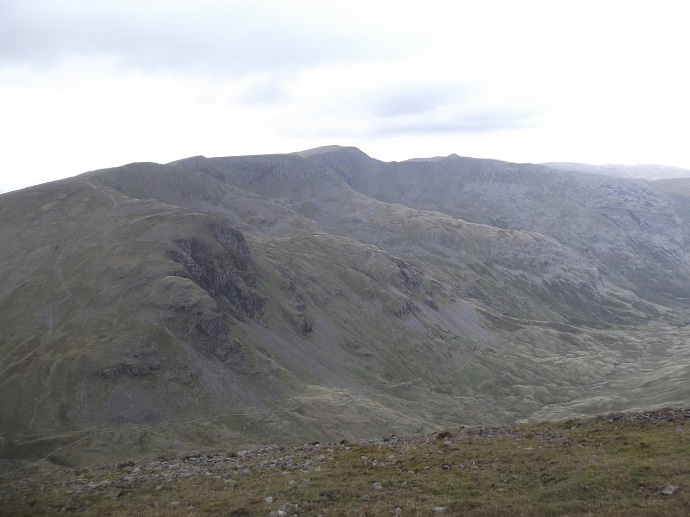 In spite of one last effort by a looming cloud, by the time I was heading down the ridge to Heron Pike the sun had come out properly, and it was turning out a nice afternoon. 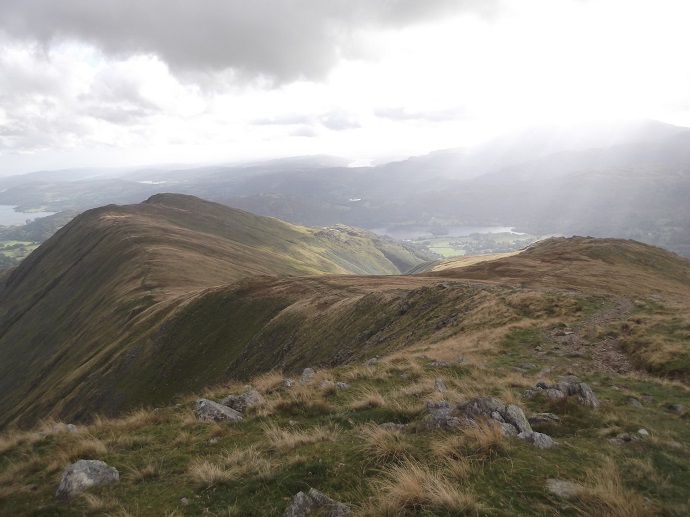 There are at least two possible Heron Pikes - according to Wainwright the real summit was the second rise on the ridge, but the second rise I counted was too rocky to be the grassy place he described, although it was higher than the next one, and a nice summit. 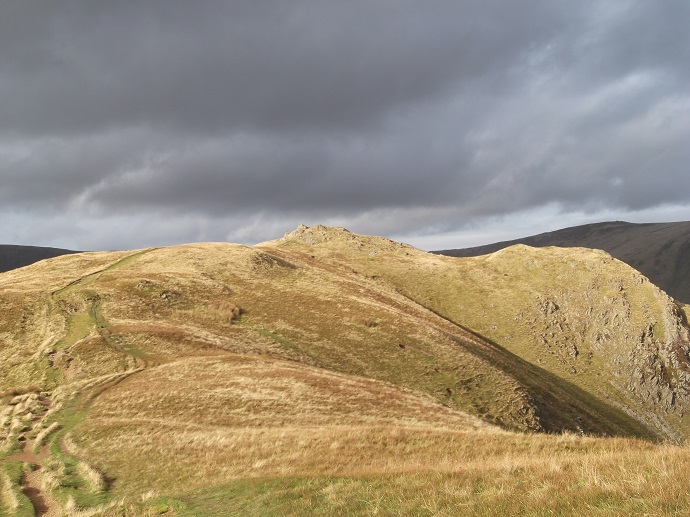 The next rise was presumably the right one, with one rocky bit surrounded by grass. From there the ridge went more steeply downhill for a while, with good views to the south. The distant views were hazy, but just distinct enough to be tantalising - I decided that the hills which looked like a geometric pattern had to be the Howgills, although I couldn't quite work out the geography to put them where they were, and that an oddly shaped summit way to the south east over Wansfell could well be one of the famous Yorkshire ones (as far as I could tell afterwards, it was Ingleborough peeping over Gragareth). Nab Scar's summit seems to have been chosen because there was a cairn there to use - the cairn can't have been built on a chosen summit, because there's higher ground even on the other side of the path, and higher ground again immediately behind - which at least has the merit of a dip between it and the even higher ground beyond. 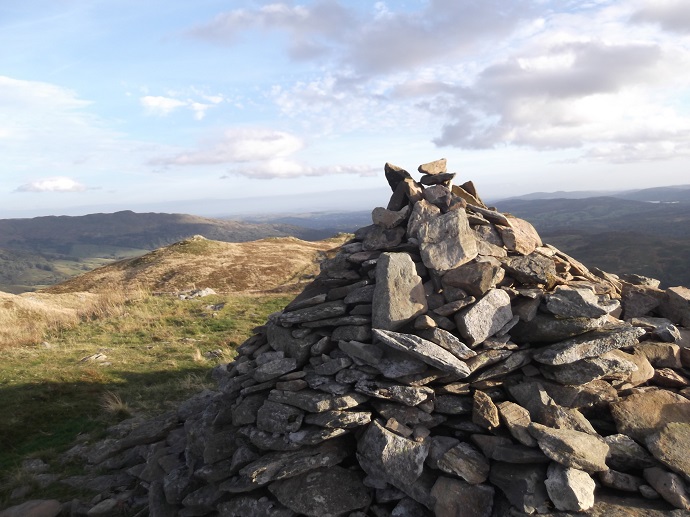 Like so many ridge summits I suspect it's supposed to be the summit as seen from the valley, but in that case the edge of the scar itself, although lower, would be a better bet.

At the edge everything gets a bit dramatic, as if you could just jump down into Rydal Water far below. The path takes a more sensible route, slanting down towards Rydal church, with good views of Loughrigg on the other side of the water, and Windermere stretching out beyond Ambleside, and the trees just starting to change colour in Rydal Park ahead. At Rydal the light was beginning to fade, so I didn't stay to prowl around, since I still had to get round the far side of the lake and along Loughrigg Terrace to High Close where I was staying - and finished off with my most exciting walk of the day, down to the pub at Elterwater in the dark and back in the even darker - obviously a theme of this trip!


GreatRigg.gpx Open full screen  NB: Walkhighlands is not responsible for the accuracy of gpx files in users posts

Great report. Good pictures as well.
Looked like a really atmospheric day in the hills.
Recently did Stone Arthur and glad you picked out the same summit as me. Its quite undefined up there.

I chose my summit in retrospect, really - by the time I was up on a level with Steel Fell it must have been a lower one! It wasn't nearly as obvious as it looked from below.

It did turn out a really nice day - much better than I'd thought it would in the morning.

I'd have said that The Swan was famous through Wordsworth... except that it was already 'the famous Swan' when he wrote of it! Who knows indeed...

Another lovely report from your (very interestingly-formed) Wainwrights mission. You do write really evocatively.