Hadn’t been near a hill for several weeks due to other commitments. Now had the choice of Saturday or Sunday and north or south . Had been watching the forecast and it looked better for Saturday and the south – didn’t quite turn out that way though.

Parked in the wee layby at NX353906. Initially headed north down the road before turning right onto the Shalloch on Minnoch track.

Followed the track down past a locked up house then over a bridge on the Water of Minnoch. Wasn’t paying attention and kept on that track until realising that it was heading in the wrong direction. Back down to the bridge to pick up the correct path.

Ruin marked at Shalloch on Minnoch on the map

Boggy bit just after the ruin then past some forested sections before getting on to the open hillside.

Hoping it would clear further up

Not so bad looking back

Didn’t clear up – no view at the top

Now in the clag, headed southwards towards Tarfessock but it was showing no signs of clearing up at all

Continued south past some wee lochans

Towards Loch Macaterick and Loch Doon

Starting on the ascent up to Kirriereoch Hill, the weather started to look as though it might clear up. Found this a bit steeper than expected. 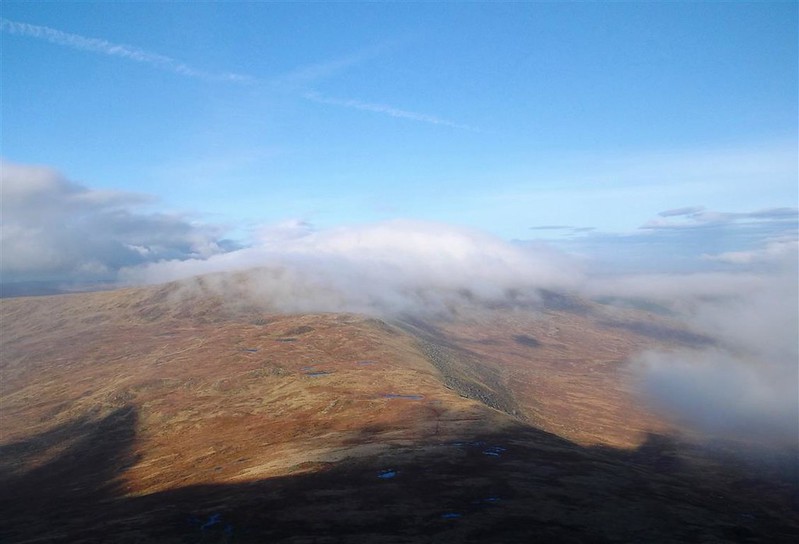 Up over the top of Kirriereoch Hill

Found one cairn which had some views then walked over to another smaller cairn which looked as though it may be a bit higher.

Then the clag rolled in again and saw nothing at all on the way to Merrick.

Met a father and son at the summit – the father remarked that he had been up here several times in the past and it had always been misty.

Then off SW to Benyellary and met some more walkers.

Still misty at the summit

From there, headed NW. Lower down found it hard going due to long grasses covering very uneven and boggy ground.

Cleared up a bit though

Followed to the east of the Kirkennan Burn towards the forest where a track was marked.

Had to cross over a wall to get into the forest. Must have missed the start of the track and ended up going through a fire break instead – not the easiest of options.

Found the main track and headed down past the quarry

Followed the track to Tarfessock then turned left aiming for a ford marked on the map. The track here was part overgrown and looked as though it hadn’t been used for some time - not a good omen. Arrived at the ford which didn’t look as though it would be easy to cross – wasn’t up for removing the boots at this point.

Decided instead to head north along the side of the Water of Minnoch and pick up the track used at the start. Uneven boggy ground again made the going slow but it was a bit easier to cross at the Shalloch Burn instead to get back on to the track. Then back to the car as the light started to fade.

Sounds a bit hard going but I'd like to climb Merrick one day.

A nice round! In your pictures the weather doesn’t seem to have been too bad. Some good shots there! I like the one of the first cairn with the swirly cloud in the background.

A mixed day you got there but good walk all the same. Good to see you followed my route although you weren't as lazy as me and started from the viewpoint.

Good walk there Neil, liked the looking back image..almost a perfect saltire..