I had grand plans for this day - there were 6 Eastern Fells still to go, and although that was a bit much, four seemed quite possible - and surely anyone could achieve three! But I was staying at High Close and had to walk back up to Grasmere first, and although the baker opened at 9 they didn't have any breakfast food out yet, and once they did it was a shame to hurry pain au chocolat and coffee - and everything just went a bit slow.

There was a different kind of mist from the day before, lying vaguely over everything instead of solidly over the higher parts of the hills, but I still hoped it might clear later. 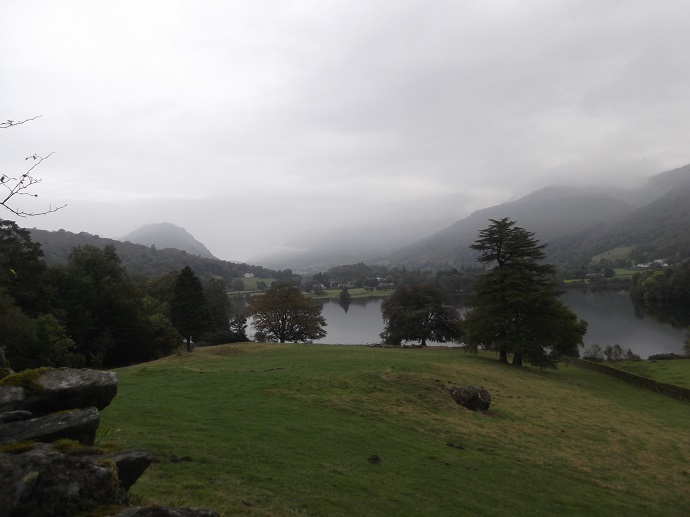 My first job was to get over Dunmail Raise, and I made my way up through the village to the Swan, getting my first view of a definite Lion and Lamb on the way. 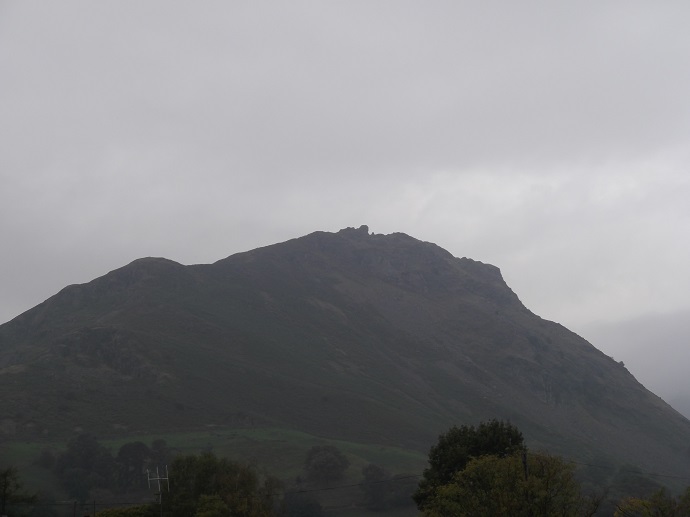 The road started off quite well, with pavement until after the Travellers' Rest, and a grassy path along the verge for a bit further. After that it was possible, but less pleasant - there was always a verge wide enough to walk on on one side of the road at least, but it was often stony or rough underfoot, or brambly at the side. I was quite annoyed by the state of it all - there must *be* a right of way from Grasmere to Thirlmere, swallowed up by the road, and once you get over the parish boundary at the top of the Raise there's a forestry path running the rest of the way, as well as the path to Steel End - but on the Grasmere side, they don't seem to want anyone to get out. I've got no idea who to complain to, though!

And somewhere along the way I did get a view of the old lady playing the organ - I was quite impressed by how distinct the shapes of the summit rocks really were. 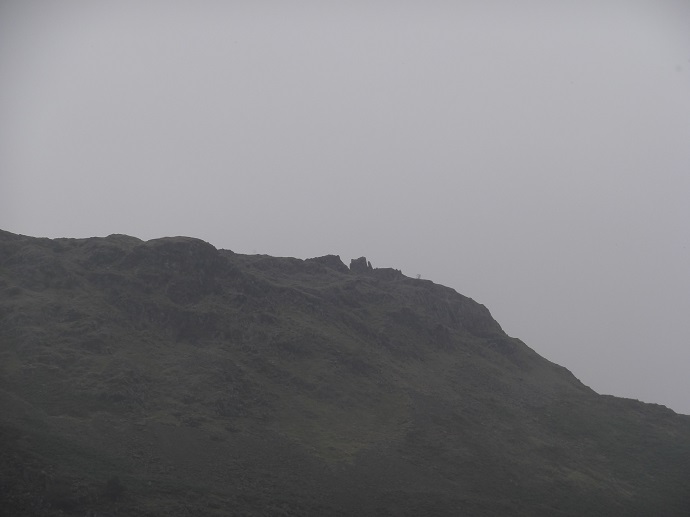 The top of the Raise had an apparently-famous telephone box - which was quite excitingly coloured - and Domnall's burial cairn, sadly squeezed between the two parts of the road, and a view of a Howitzer on Helm Crag, as well as a view ahead - I always like coming over the top and seeing the other side. 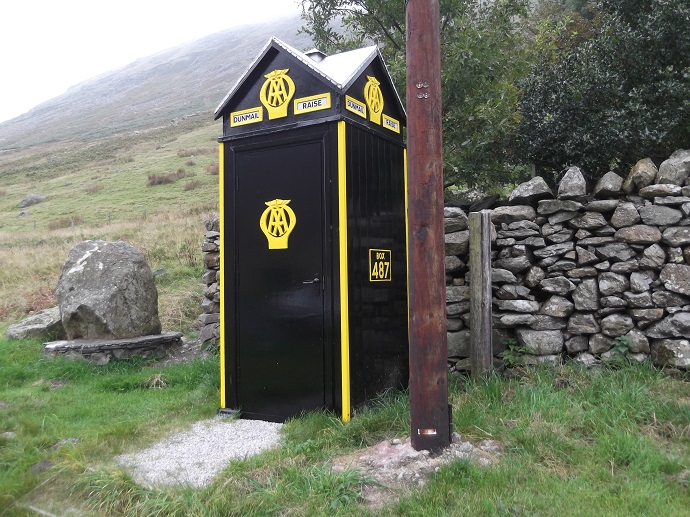 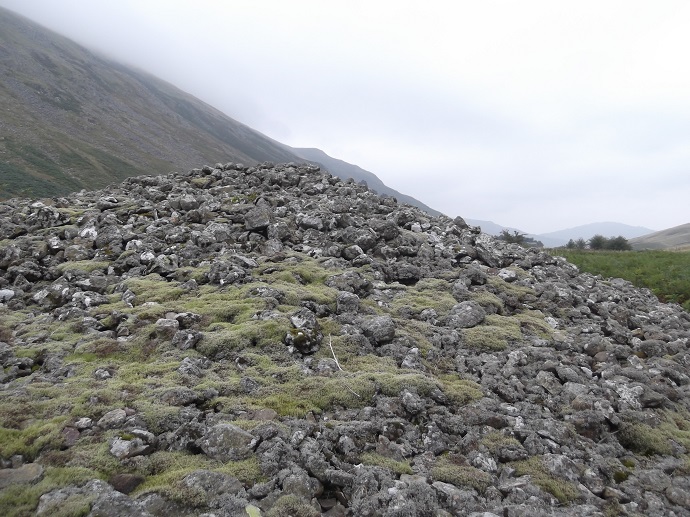 There was a sign at the start of the forestry path telling me that it was closed for felling, and I should take the bus rather than walking along the deadly dangerous road - I thought if I'd got that far I was probably ok, but since I was a bit tired of the road I decided to take the footpath down to Steel End, following a procession of sheep who were determined to run away from me, but not willing to leave the path to achieve it!

After I came down to the road junction I found a path just above the road which didn't seem to be closed, and followed that along as far as the church at Wythburn, where I finally - about noon - set off on the main part of my journey.

The first part was straight up through the woods - very straight, very up, and very warm work - then through a gate, round the corner of the wood, and almost doubling back before going up again.

I had a preconceived idea that the west side of the Helvellyn range was just one great wall, so I was surprised to find myself in a big amphitheatre sort of place. The path swung round to the right and climbed up to the ridge which formed the south side of the valley - I was feeling oddly worn out and still very slow, and it seemed a never-ending climb - and when I came onto the ridge I would still only be halfway up. 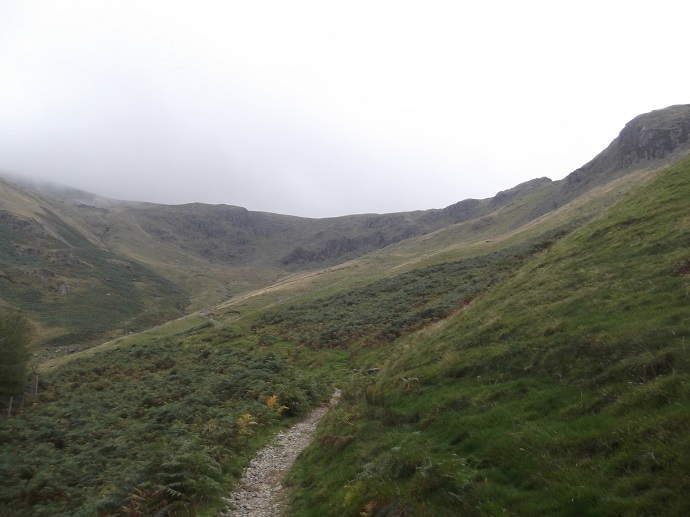 Looking back I had a view of Thirlmere, low enough to leave a grey ring all around it.

Once onto the ridge the slope was at least gentler for a bit, although I started meeting people who had already been up and were now on the way down, which didn't exactly cheer me up. 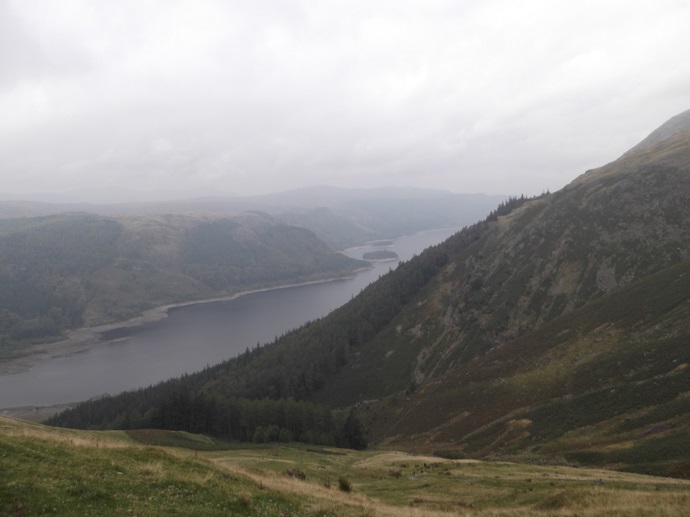 Somewhere on the long climb up to the top of Comb Gill the cloud started coming over, first in patches, then just leaving odd patches of clearness to show Thirlmere or the other side of the valley in a picture frame of cloud, then as solid mist. 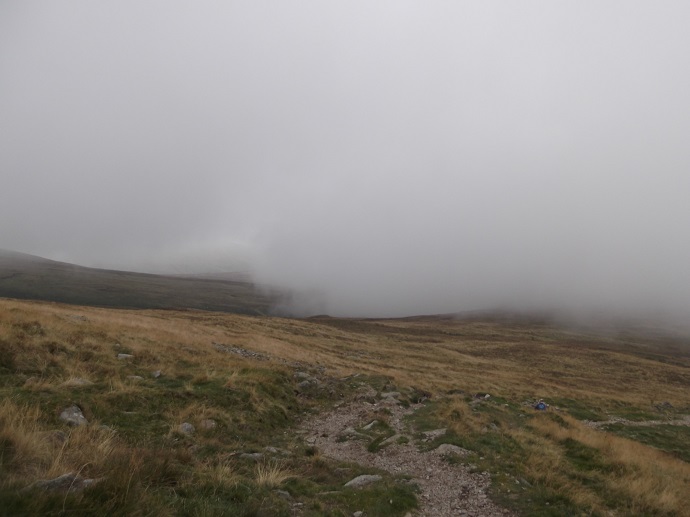 Mist on the path

I plodded on, up more zigzags than either map showed, and eventually the path swung to the left and led more gently up the slope, and then at last I was out on the ridge, and a patch of mist cleared for the first time in quite a while to give me a glimpse of Helvellyn's crags.

None of the possible summits and cairns on Nethermost Pike seemed to exactly match the description, but it was all so flat that it didn't seem to matter very much, and I just picked the most likely one, as far as I could tell when I could only see one at a time. 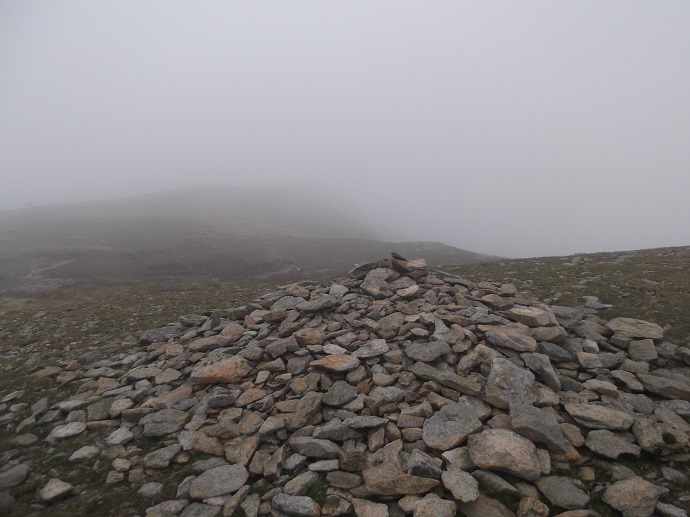 It was a ghostly place in mist, a great grey expanse populated with spiky rocks and sheep which loomed up as big as monsters before retreating to their proper size. 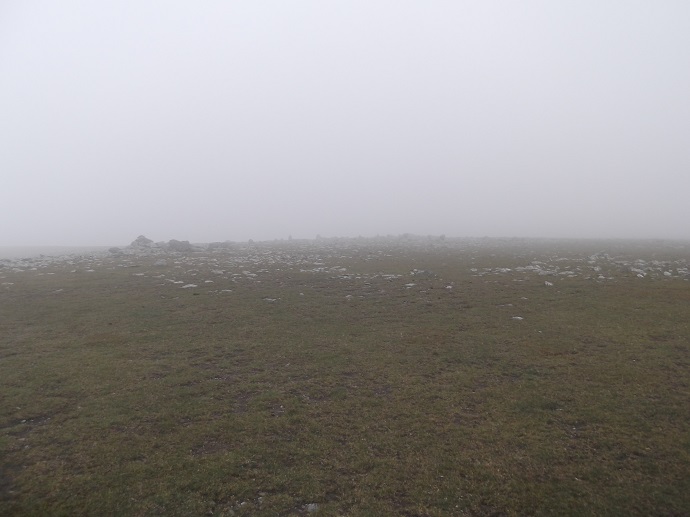 Stone in the mist

I braved the eeriness for long enough to eat my lunch, because it was late, and I was hungry, then set off south. I got one brief glimpse down a gulley, and another of paths splitting ahead, but generally the mist was all around. 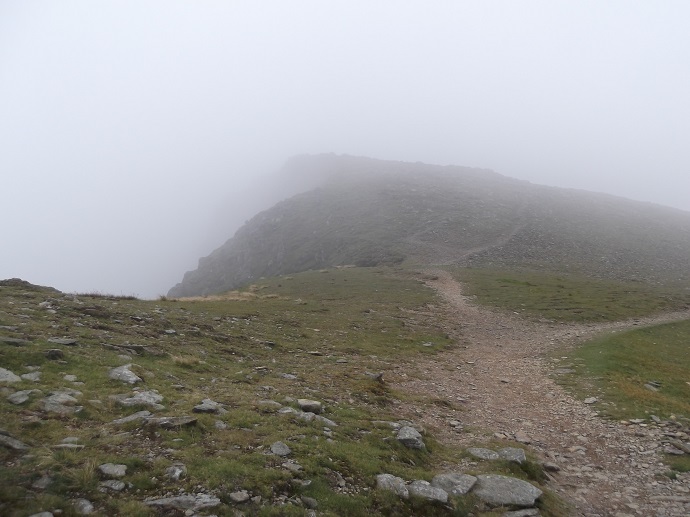 A glimpse of path

I knew that the first rise I came to was only the top of High Crag - the second had to be Dollywagon Pike, and I followed the path up to the left instead of keeping on the lower ground to the right - only to find myself in a completely different place, rocky like the top of Ill Bell.

I honestly hadn't a clue what had happened, and wondered if that was only the top of High Crag, so I went on, and came quite quickly to a place which I might have walked straight past if a man hadn't emerged from the mist to my left.

He couldn't have come from nowhere, so I went to see, and found a cairn and a ridge leading down ahead - which had to be the summit, but I still wasn't sure how I'd got there. 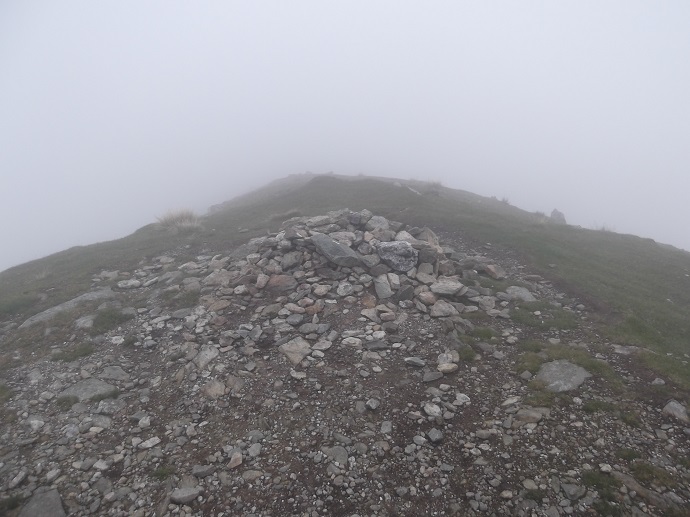 I followed the edge back to the main path, wishing I could see something around me - and then suddenly my wish was granted and the world opened out beneath my feet. 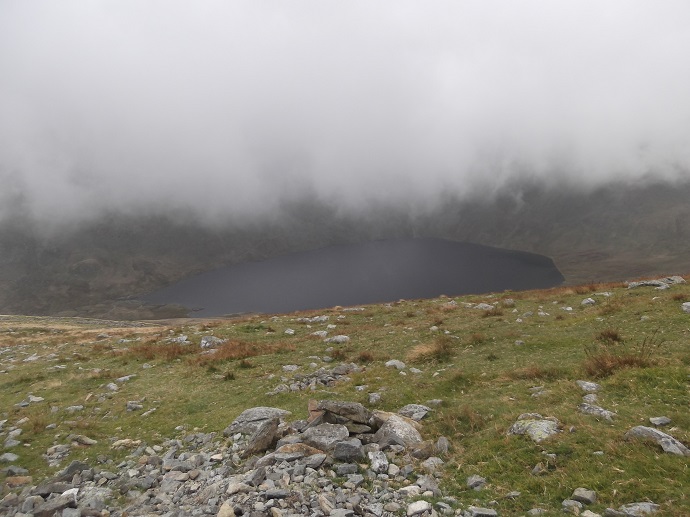 I enjoyed the zigzag walk down to the tarn - the path was good, and I was glad to be out of the cloud. I knew I couldn't really get lost on the ridge, because there was a good path along it and only one place to go, but it wasn't much fun never having any idea how far I'd gone or where I would get to next. 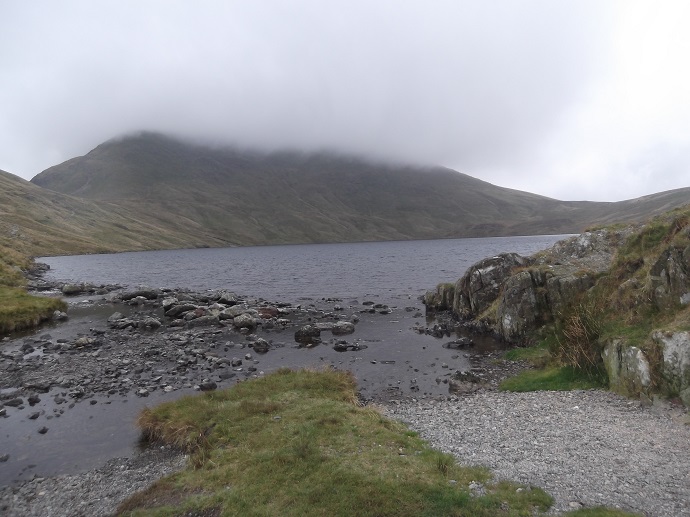 Once down at the tarn I went hunting around for the Brothers' Parting Stone - it turned out to be further down the valley than I'd expected, and quite different, but it did have a thing like a signpost on top to direct you to it once you'd looked the right way. 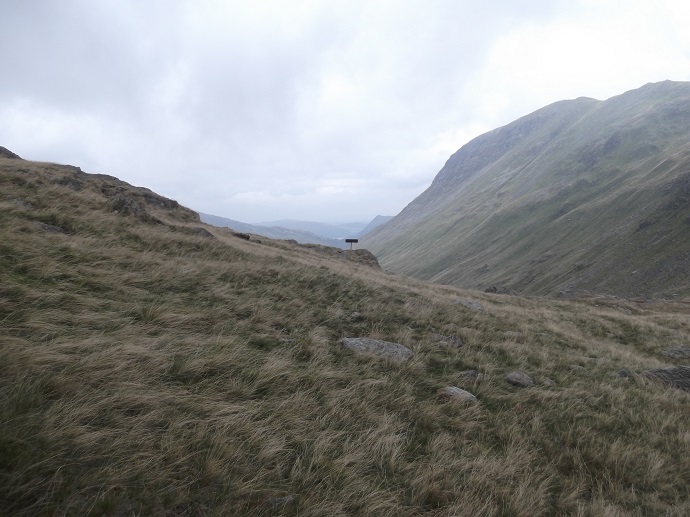 Saint Sunday Crag was out of the cloud by now, and looking very tempting, but I wasn't sure I'd have time, and there was no point leaving one hill undone on the Grasmere side and two above Patterdale. Seat Sandal should have come next, and there probably was time to go over and down the ridge, but as it was still deep in cloud and I decided I'd had enough of ploutering about in it, I decided to leave all four hills for another day.

Still, it had given me the idea that I could go down towards to Grasmere instead of out through Grisedale again, so I went down under the side of Seat Sandal through a dreary place that had to be called something moss (and was), and then down a path above Tongue Gill, through grass and bracken, which got prettier as it went until it joined the path from the other gill at some bridges. 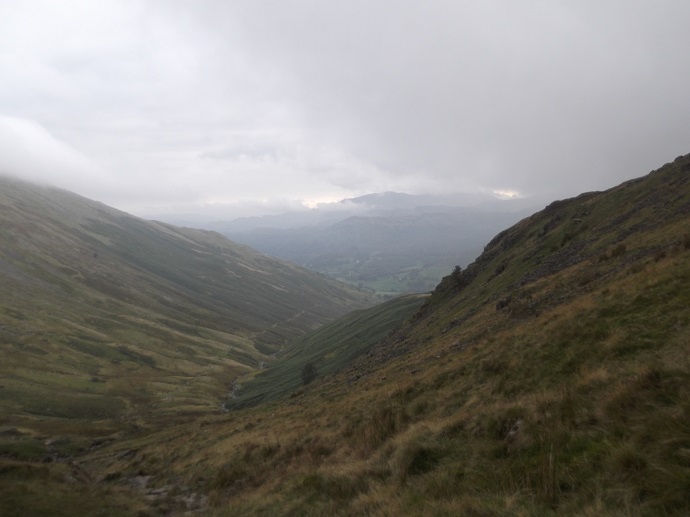 Looking down towards Great Tongue 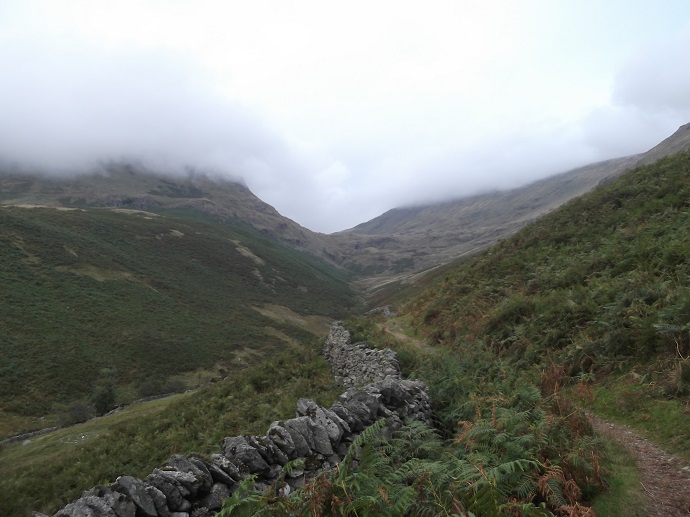 I got to the stop at the Travellers' Rest with about 15 minutes to wait for a bus, and sat watching the sun come out over Steel Fell, as the weather set itself up for a beautiful evening and next day, wondering why it couldn't have been like that over the weekend, or why I couldn't stay... 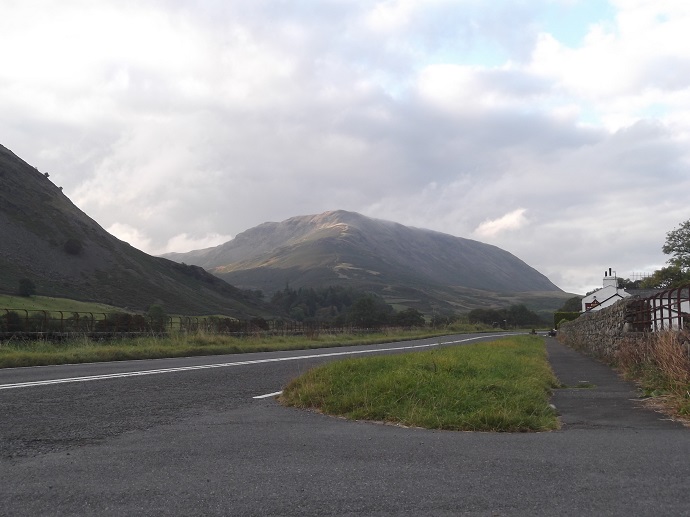 
NethermostPike.gpx Open full screen  NB: Walkhighlands is not responsible for the accuracy of gpx files in users posts

Re: Nethermost and Dollywagon Pikes

Well done for reaching those two summits in those conditions, nigheandonn. The direct path from Helvellyn to Grisedale Tarn is easy enough to follow in mist, but I know those two tops, especially Dollywaggon, require detours which could be tricky without visibility.

I was staying in High Lorton on 28 September, and the forecast did make it sound like a good day for a low level walk! So we walked along the River Cocker to Cockermouth, to visit the food festival and have a couple of pints.

Re: Nethermost and Dollywagon Pikes

I won't swear I found the highest inch of Nethermost Pike, but I must have been close if not. I think I found three cairns! Dollywagon Pike's summit was quite definite once I found it at all - I was following the edge rather than the main path at that point. I found it really useful to have Wainwright's descriptions as well as the OS map, to know what things were supposed to look like when I found them.

I don't suppose I'd seen a forecast since leaving work on the Friday - or maybe it was one of those vague 'slightly better in the east' ones. It would have been a good day for wandering round below the cloud, I agree - but my time in the Lakes is so limited that unless it actually feels dangerous I always want to push on. I was really glad to get the views back at Grisedale Tarn.