Thought I might as well post about a hill I did manage to do this year, before injury got me!

This was the first time I'd started out intending to do one thing and ended up doing something entirely different, and I think it was good for me to realise that sometimes it's for the best if your laid plans gang agley (thanks, Rabbie).

The weekend before I'd decided my next Munros would be up Glen Lyon. I love Glen Lyon and it's been too long since I was there. Originally I planned to go alone but midweek I ran the idea past a friend and he said he'd let me know if he was free later in the week. As is often the way, I ended up messaging him last-minute on the Saturday as I was about to leave for my walk. "Are you coming?" "Yes why not!" Well, that meant a detour into Perth on the way to pick him up, so by the time we met up, got petrol and checked our route, it was about 10am. I'd kind of wanted to be parked in Glen Lyon by 11 at the latest but this didn't now look likely.

We were heading through Killin when my friend pointed out the Tarmachan Ridge and I expressed relief that I wasn't about to go up there (it does look pretty scary from that angle!). Little did I know that once we were on the way up the Ben Lawers road, we'd be pulling in to the car park, ready to do just that! My friend was telling me what a great walk it was (he'd done it a few times himself) and we were discussing how much further it'd be to Glen Lyon, and then we just decided to switch the whole plan. I might not have done it alone but with a partner I was up for giving it a go. It helped that we could see a fairly big cloud hovering in the distance, Lyon-wards.

It was a fairly straightforward walk up Meall nan Tarmachan, though for me this was the steepest route up a hill I'd yet encountered. The ground was dry, though, and it didn't take us too long to reach the summit, though I was so caught up in the idea of the upcoming scramble that I almost forgot to celebrate my 6th Munro! The views were spectacular and the landscape looked so remote. This area of Scotland is so beautiful and green and lush. Loch Tay looked brilliant from up high and I liked seeing the hills stretch all the way into the distance. No roads, no people, nothing! Well, aside from the hardy man jogging up the hill (bloomin' overachievers!) and another chap pulling on a much-needed sweater – the wind was starting to blow a bit chilly.

As we headed along the ridge I decided this was one of my favourite bits of walking so far. It was technically not too far from where I live in driving terms (compared with a lot of places!) but it felt really far. It was brilliant. We were caught up by a couple who we paused with on the top of Meall Garbh; the lady and I discussed how fab it was to be there rather than in the middle of a town, stuck in some shop or other. "This beats being on Princes Street!" TOO RIGHT.

I might have been spending a wee bit too long looking at the view so I could put off the scramble... but in my defence it WAS an ace view and I didn't really want to move for a while. The way in the distance looked like it was getting quite a bit of rain now, and I felt glad I hadn't ended up out there alone in a downpour. Being on the ridge was far more pleasant especially with a Wispa!

Typically for me I had a wobble about the scramble. "I don't know... I'm a bit scared of the idea of any scrambling," I said to my friend. Realising, however, that one day I'd have to do some if I was ever to bag all the Munros, I decided to have a go and see what happened. Having done it I know it's not that big a deal but beforehand I wasn't feeling that! As we approached, it just looked impossible. How does anyone get down that?! plus swearing was in my mind. The nice couple overtook us as I told them I'd probably be some time while I behaved like a proper scaredy-cat.

Well of course I did it, the tale has a happy ending, and I didn't injure myself apart from slightly scraped hands and a muddy bum! Going down on the ol' bottom seemed the best bet especially once the nice couple weren't around to witness it, and my friend kindly assisted by telling me what the best way down was (he pretty much leapt down, or so it seemed!). I was never a climbing sort of kiddie so it's not something I'm used to, but I didn't hate it, it's obviously just concentrating and not worrying so much. And luckily it was fairly dry.

So, once down, I was able to gape up at it and think "I just came down there!" and feel pretty proud of myself. What I am enjoying most about starting to do Munros is the way they challenge me to be a bit braver and stop being so shy and low in confidence. Even just a small scramble gave me a huge sense of achievement and I think that helps even away from the hills. In the office I might be struggling with something or a bit stuck and I like to think "I did a scramble!" and it's a good wee boost. Long may that continue as I keep going on my Munro journey!

The rest of the tale is a bit of a damp squib... a very damp one as shortly after we headed away from the scramble, the rain drifted in all of a sudden and visibility went from great to terrible. Just proof how quickly things can turn. We had been planning to go all the way along but the cloud was so low and it was so miserable we decided to head off the ridge at that point. We made our way through slightly boggy ground, past confused-looking sheep (oh it was OK for them, springing around on the rocks as if it was easy peasy!) and eventually caught up with the track back to the car park. Naturally, half-way along the sun came back out but it didn't look long-lasting, so I wasn't too disappointed. I'd bagged another Munro and scrambled, and those were the main things for me. I will go back again another time and complete the ridge all the way along, now I know it's not at all as scary as it looks.

The evening ended in Aberfeldy with a proper half (of beer) and banter and then we headed back south. Till next time, Tarmachan! 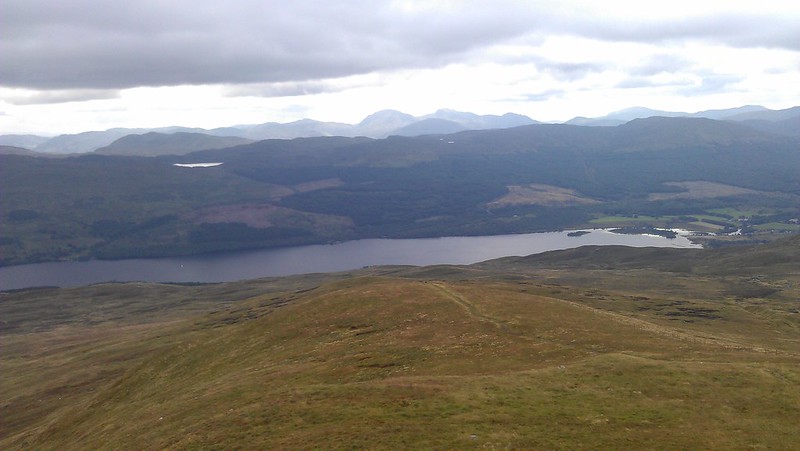 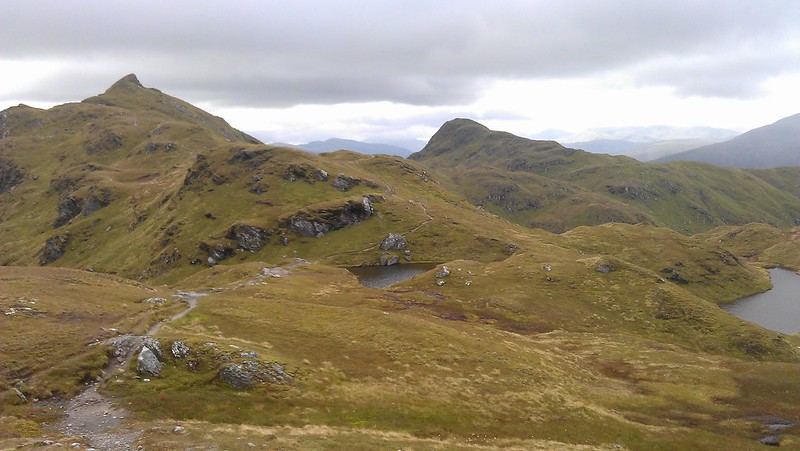 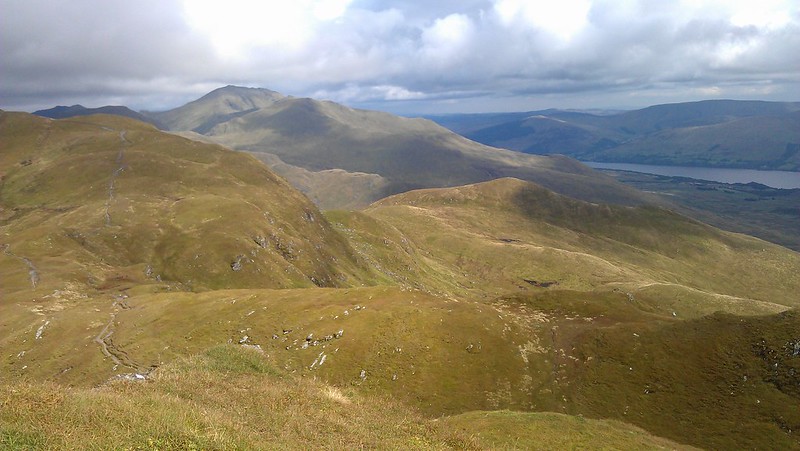 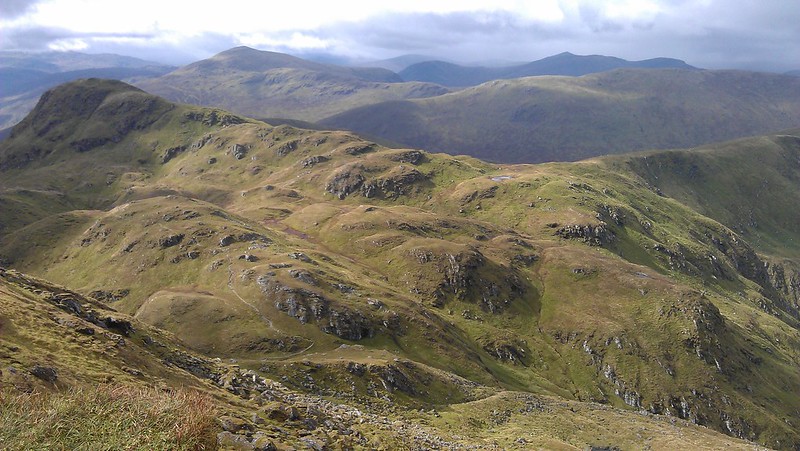 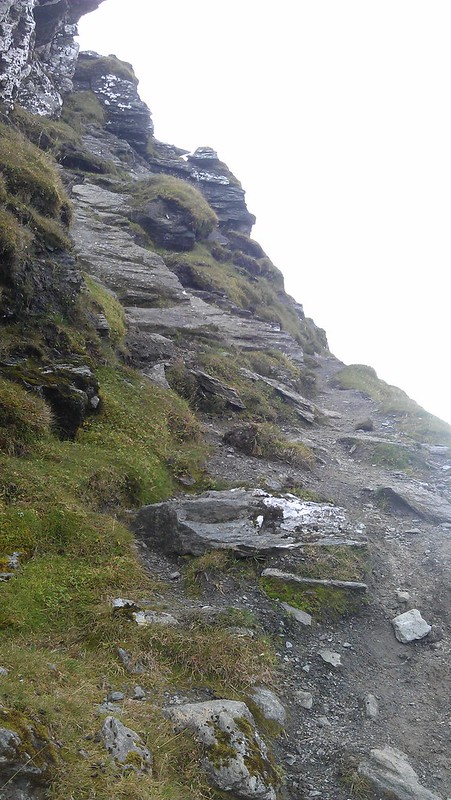 the reason we came down early... ugh 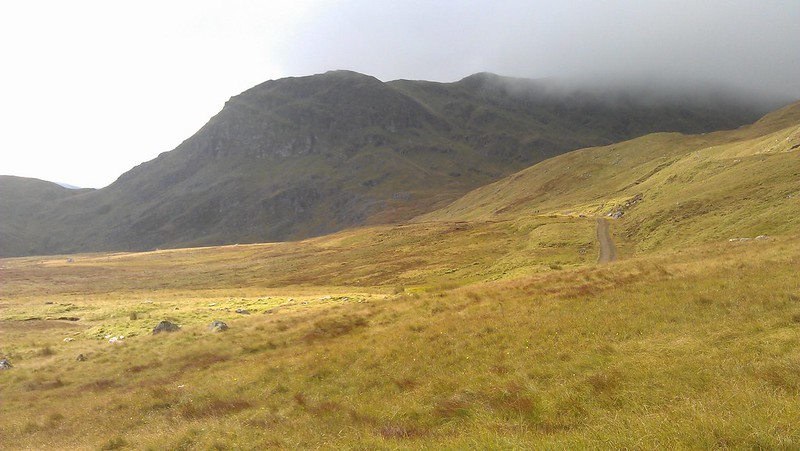 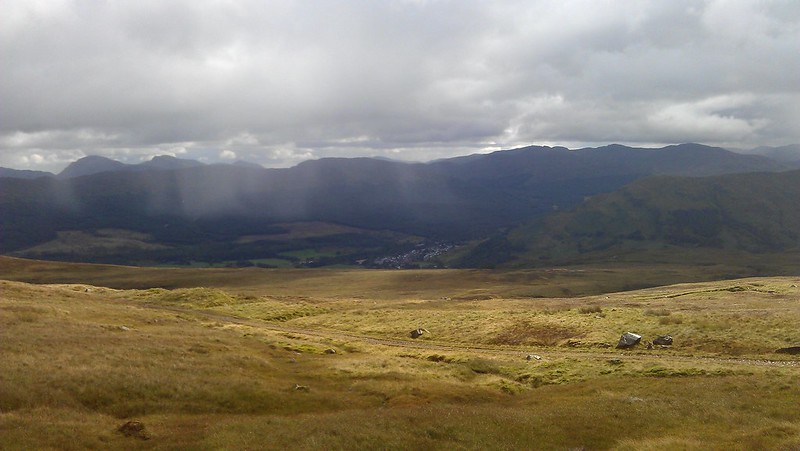 rain in the distance, at least, looks pretty! 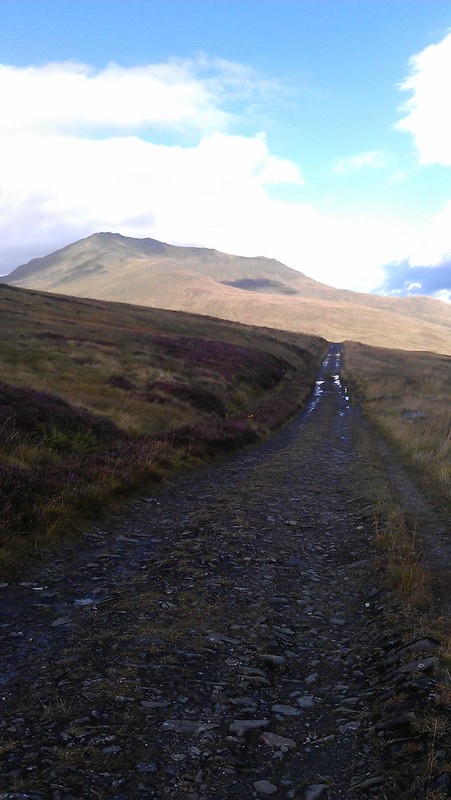 me on the way up 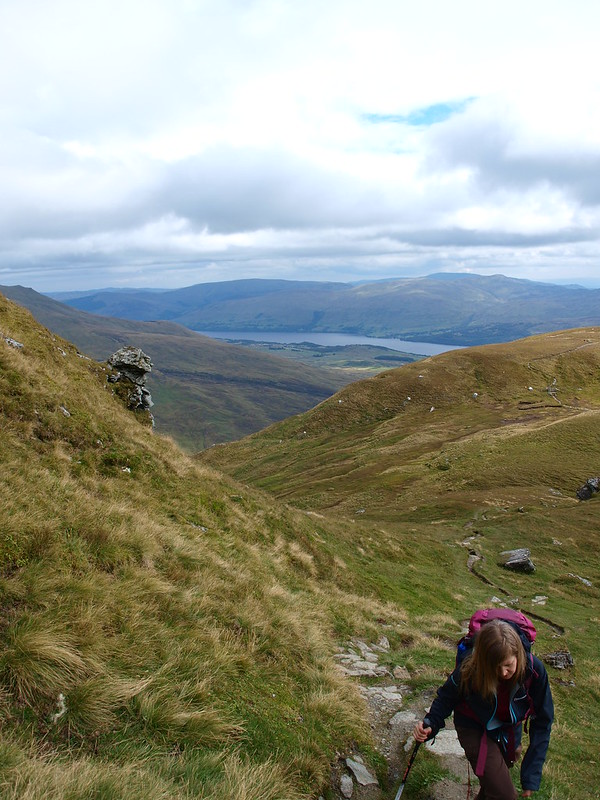 Really enjoyed that TR and your pictures thanks for posting

Nice one Kat, enjoyed that & some good photo's

Been up Tarmachan 3 times but yet to go along the ridge, maybe next year

As Gammy says, thanks for posting

Hope you are proud of yourself - that looks like a great scramble. You can now look forward to the ridge whenever you decide to do it. Enjoyed reading your report!

Great stuff, chickadee! I agree it's a beautiful part of Scotland; I think there are those (including a certain Mr. McNeish) who underrate the mountains in this area. As you got past Meall Garbh and the scramble, I'd say you've already done the better part of the ridge. I'm sure plenty of experienced scramblers have used their bottoms when coming down that section!

gammy leg walker wrote:Really enjoyed that TR and your pictures thanks for posting

Fife Flyer wrote:Nice one Kat, enjoyed that & some good photo's

Been up Tarmachan 3 times but yet to go along the ridge, maybe next year

As Gammy says, thanks for posting

Give me a shout if you go once winter's over, quite fancy getting right the way along next time! I'll be just as rubbish at scrambling though.

AnnieMacD wrote:Hope you are proud of yourself - that looks like a great scramble. You can now look forward to the ridge whenever you decide to do it. Enjoyed reading your report!

Thanks Annie, I am quite proud even though I know it's not quite Aonach Eagach league of scrambling!

simon-b wrote:Great stuff, chickadee! I agree it's a beautiful part of Scotland; I think there are those (including a certain Mr. McNeish) who underrate the mountains in this area. As you got past Meall Garbh and the scramble, I'd say you've already done the better part of the ridge. I'm sure plenty of experienced scramblers have used their bottoms when coming down that section!

Thanks! I don't see how people get down any other way but I've never been very dignified when it comes to stuff like that

Weird you mention McNeish, as my friend and I were reading his Munro book recently and noticing how most of the hills I've done so far, he doesn't really rate! I am a big fan of the 'east', though, love all the greens and the flowers.