This is my first year doing the munros (though I've been a keen walker for years) and my aim was to do about 15 this year. Last Saturday I managed ben vorlich and Ben vane, to bring my total to 20! So riding on a wave of enthusiasm I set out to get two more. My next targets where the other two at arrochar. Easy peasy! Right......

Forecast had been improving all week, now was 80 % chance of clear tops. I've never been on the hills with more than a 60% chance! Bingo!! hehehe

Left edinburgh at 5.40am. Dumped my brother gavin at Tarbet, he's a cyclist and wanted to cycle from here to Edinburgh.
I thought I saw some whiteness on the top of ben lomond, though it's still quite dark, snow? "nae, just clouds" say gav. So began our top gear style race. First back to Edinburgh!

I got to the car park for the start just before 8.00, aware that day light hours are drawing in quickly and things can go wrong, so better to have loads of spare time to play with. Only a couple of cars here, but no one around.
Set off and quickly found the path to the right, after the wooden fox, though it looked suspiciously like a stream to me. Made it up and over the next path, then remembered to turn my phones gps on, doh! But I made a wee error at the next bit of path. It looked like the path headed up left and a wide stream went to to the right. I should have gone up the stream/path, instead I followed the path, realised shortly after I was heading the wrong way.

No matter there's a path further up on the OS map that leads over! Couldn't find OS path

, so headed of through thick forestry to get back on to the actual path.( judging by all the foot prints this way I haven't been the first to do this, hehehe) back on the path, though covered in pine needles, I headed to the first obstacle. A steep rocky climb up to the left under a craggy out crop. Easy peasy with great views out to Ben lomond, turning out to be a beautiful day. 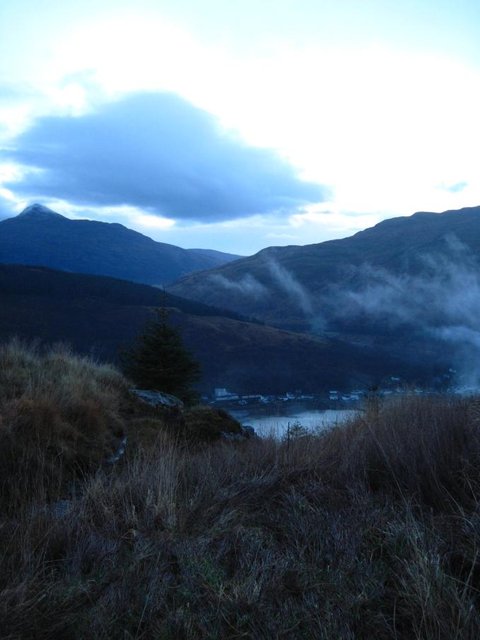 Made it up to cruachan nam miseag, suddenly saw the cobbler for the first time! It's like something out a horror movie! Weird and very cool. Being cloudy doing vane and vorlich I haven't seen it last weekend. Also looking a little harder, some suspicious whiteness to it. Definitely frosty! Took some pics then headed onwards and upwards.
Got over a wee hump to see the next section. Eek! This really didn't look great. Some hills positively welcome you to climb them. Not this one..... If this was a horror movie, this would be the point at which you'd start shouting at the screen,"don't go down into the basement" "don't go towards the scary hill" "trolls"
Then it started snowing! Not huge flakes, but......plenty of them.

It's the first time I've actually got nervous about a hill. Then my common sense kicked in, go take a look, u can always turn back if something doesn't look safe, come back another day with some company.
Got down the wee depression and there was a clear, but frosty path heading up through the crags. Poles away I started up, it was a bit scrambly, but actually a lot easier than it looked. Even getting to the spearhead and up the right hand side of it was quite easy, though definitely making sure to have all four points of contact on the rocks at all times, as some bits where a bit frosty and snow covered. The wide flat summit came as a quick but pleasant surprise. Quick text to say what stage I'm at, gav's way past Balloch! Grab a sandwich then head over to find the path over the other side. No view from Beinn narnain for me, but could see enough of bealach a mhaim to head for to get to Beinn ime. The boulders on the way down where really slippy, so it was pretty slow going. Was actually glad to get to the boggy bit that came next. Through the wee gate, striding out, up the boggy hill. I feel very at home in boggy stuff now. Nae point trying to avoid getting wet, just get on with it. Just approaching the white stuff again, I met the first person I'd see up here this morning! Quick hi ya, how's it up top? Beinn ime hiding in the clag

Made the top of ime in quick time. Two more guys up here just heading down. Nae view though. Made a snowball to put on the top of the Cairn! Childish I know, but made me smile. Quick text to check in, gav's past Airdrie!
Currently done all 4 alps, but yet to get a view so I layered up and prepared to do something I've never done before....wait for a view. It was 12 and was forecast to clear by 1. It tried to clear but every time one cloud blew over, it was immediately replaced by the one from the hills to the south west and it was nowhere near warm enough to burn off. Attempting to clear up A fella in shorts appeared at one point. A brave choice given the temperature, but then I remembered seeing a guy in a kilt on Ben vane last Saturday, hehehe. At 1 I gave up, it wasn't going to clear.

Met lots of lovely people on the way down, hiya to anyone I met!

Quickly nipped over during a gap in the clouds to see loch lomond and katrine. Before the clouds rolled in again. Loch lomond with loch katrine behind

Really easy but long path down, quick check in at the narnain boulders, revealed that gav was near Armadale! 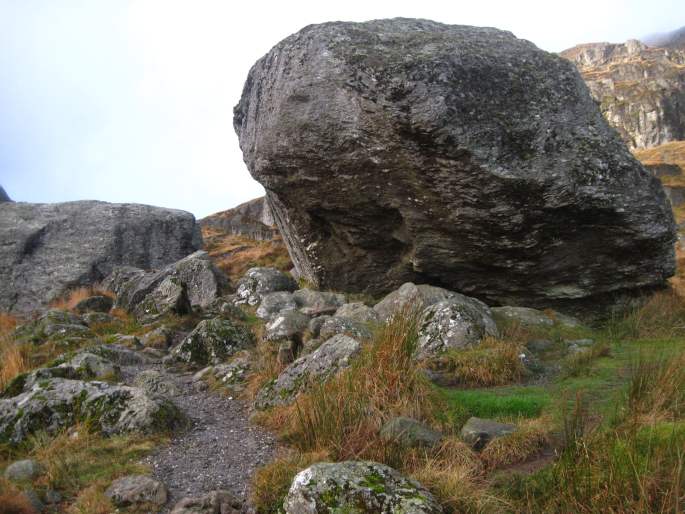 I sped up! Nae view of the cobbler anyway. Gonna leave that one for a nice summers day. Back at the car park for 2.30.
A big hiya to everyone I met both last Saturday on Ben vane and ben vorlich and this Sunday on Beinn ime!

Both gav and I made edinburgh city limits at roughly the same time. His bike had suffered and was just limping home. Pretty sure he would have won easily otherwise.