It was a busy weekend for us (the end of the year is always hectic) and we only found a few hours on Sunday to visit a hill. It might only have been a sub 2k, but a nice one. Perfect "quickie in the neighbourhood"

- up and down in 3 hours, good views and some pathless trudging to exercise off the excess fat

I'm not that bothered about completing the Marylins, but a good Sub can be just as entertaining as a higher mountain. Last winter we climbed Knock of Braemoray just north of Dava and since then I had my eyes on its brother, Carn na Loine. It can be climbed easily from the south, from a minor road to Auchnagallin (many thanks for the route idea, Malky

). The day was lovely, the county of Moray basking in sunshine, blue sky and not too windy - a great day for a quickie

We drove from Beauly to Dava early in the morning. Of course, Kevin couldn't resist taking minor roads and showing me around "his" area. I felt a bit like on a guided tour, I was told the names of all farms and tiny villages between Nairn and Dava

Kevin has been working on this route for the last five years and he he knows every road, every path, every stone... He has countless stories e. g. about how he got stuck on the narrow road to Drynachan, how he just-about squeezed his van through the Cantray Bridge and so on. Driver's fairy tales... Speaking about bridges, we stopped by Dulsie Bridge, an old and fascinating structure built over river Findhorn. I'm a bit of a fan of old bridges and viaducts, always looking for something interesting to photograph and add to my collection

This one is a little gem: 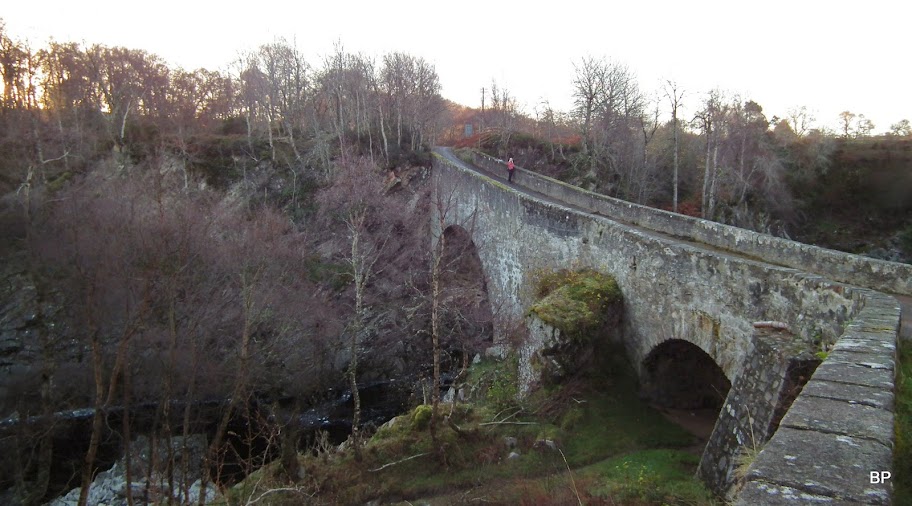 Dulsie Bridge was built in 1755 by Major William Caufield and three companies of soldiers. It used to be a part of a very important military road linking Braemar to Fort George. Today, it only carries a local road. It is grade A listed building.
As I looked down from the bridge into the deep gorge of the river, I felt a bit dizzy

River Findhorn runs about 60 feet below the bridge! Plus, the structure is only 3.9m wide, so don't try to drive across in a heavy lorry.
River Findhorn from the bridge: 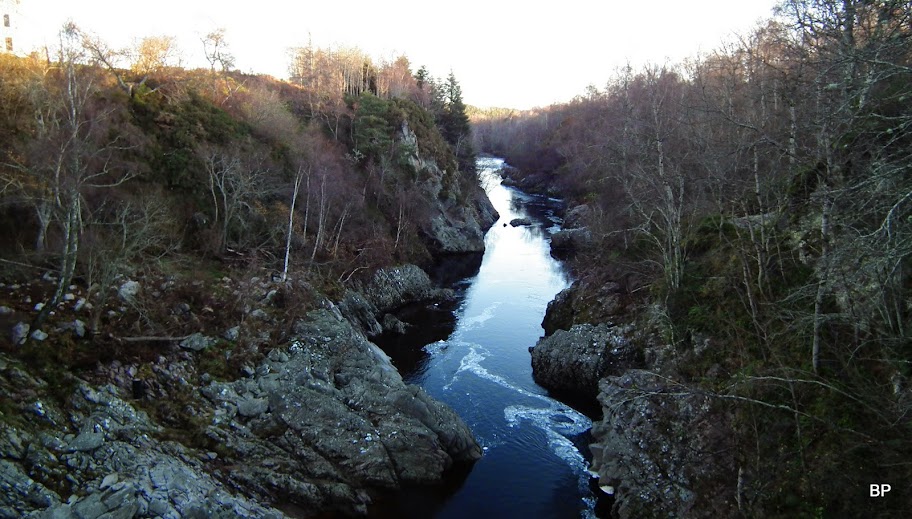 We walked a short distance along the cliffs to a viewpoint - only now the true size of this structure could be appreciated - wow! 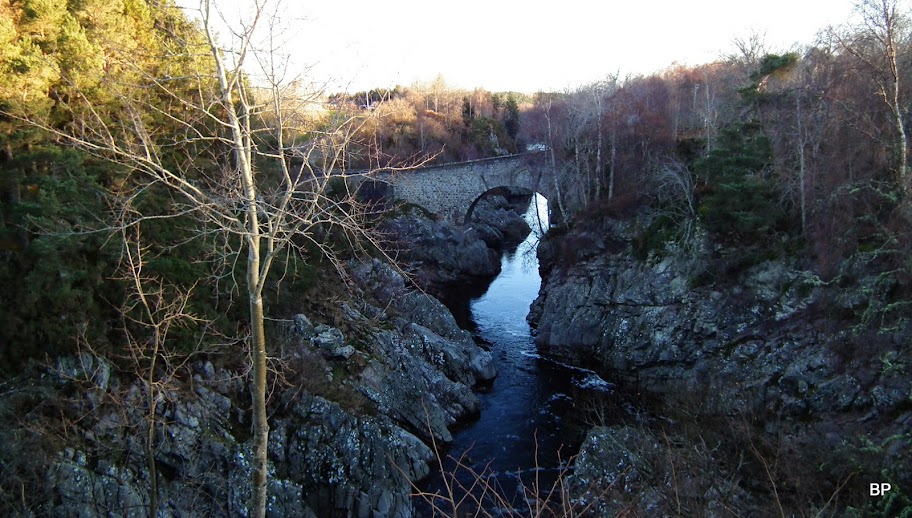 It seems that the path runs further along the cliffs so we made a note to return here for more exploration another day. Our target was a mountain today, even if only a small one.

Track_CARN NA L0INE 23-11-14.gpx Open full screen  NB: Walkhighlands is not responsible for the accuracy of gpx files in users posts
The sun was still very low over the horizon when we arrived on the narrow road near Auchnagallin... 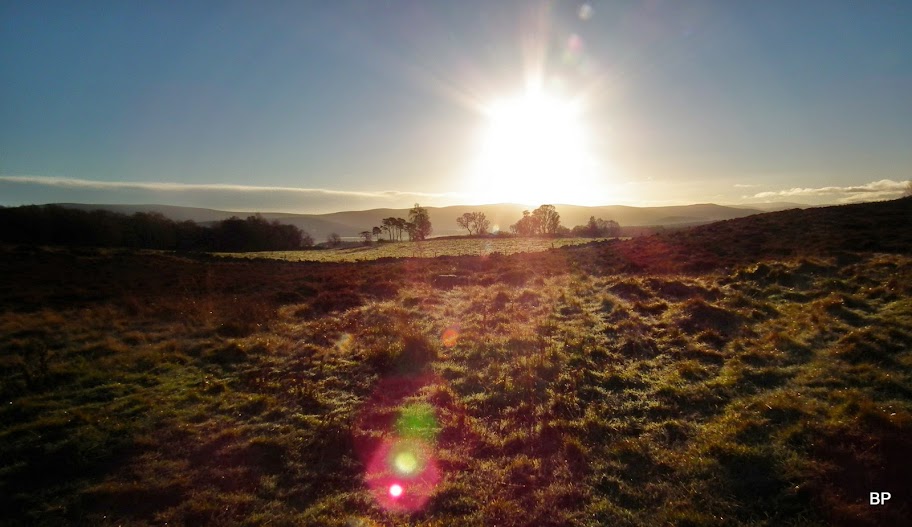 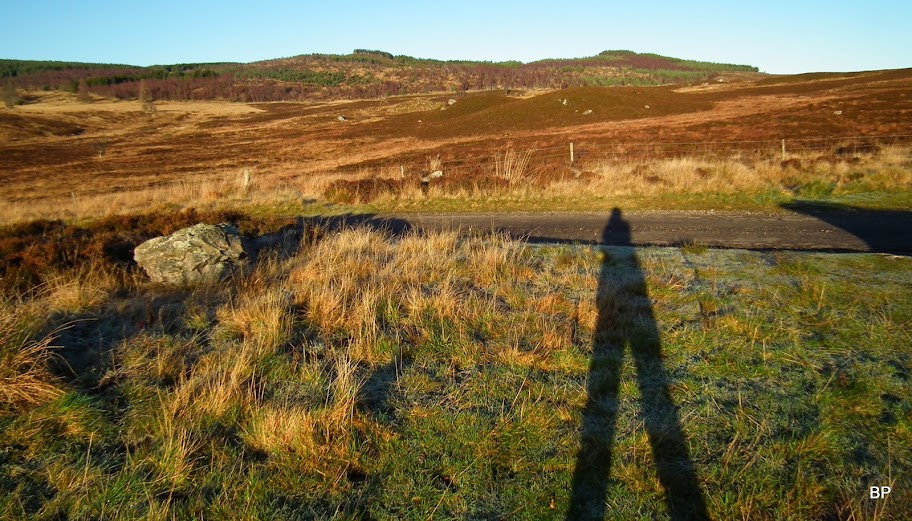 ...and the morning was still cold, hardly above zero degrees. Not a deterrent for us, though

.
We parked at 048339, next to a metal gate, which is the starting point for the circular walk over Carn na Loine. There is enough space there for 3-4 cars, but at the moment we were alone: 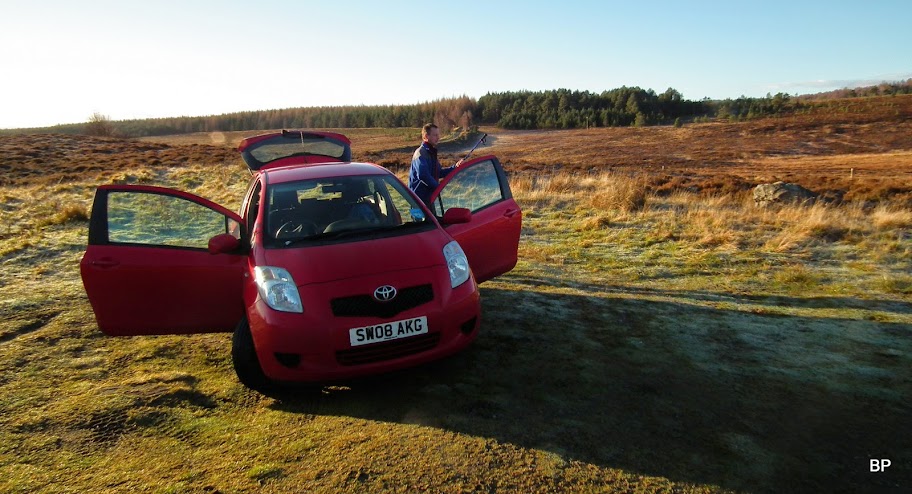 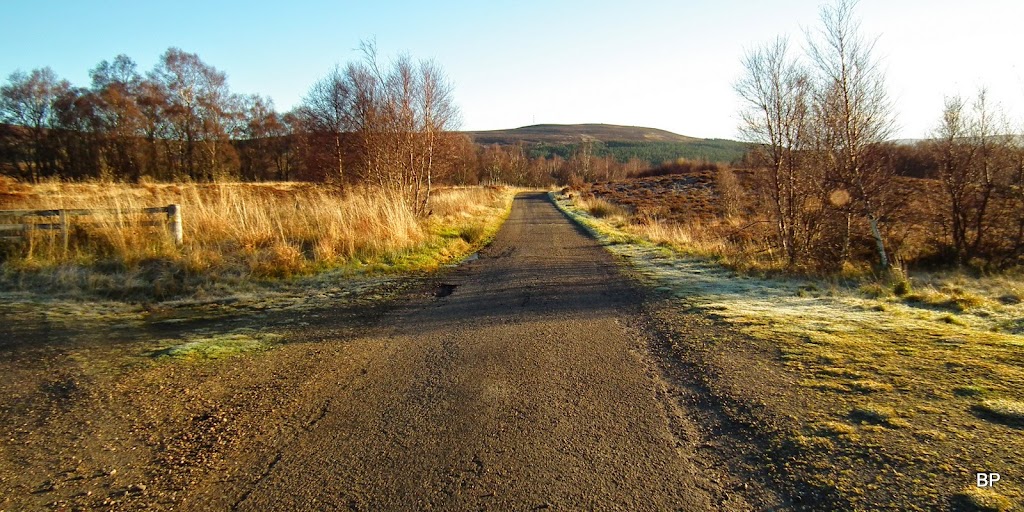 The gate is padlocked, but the fence is easy to jump over - I was soon ready to get my weekly dose of hillwalking! 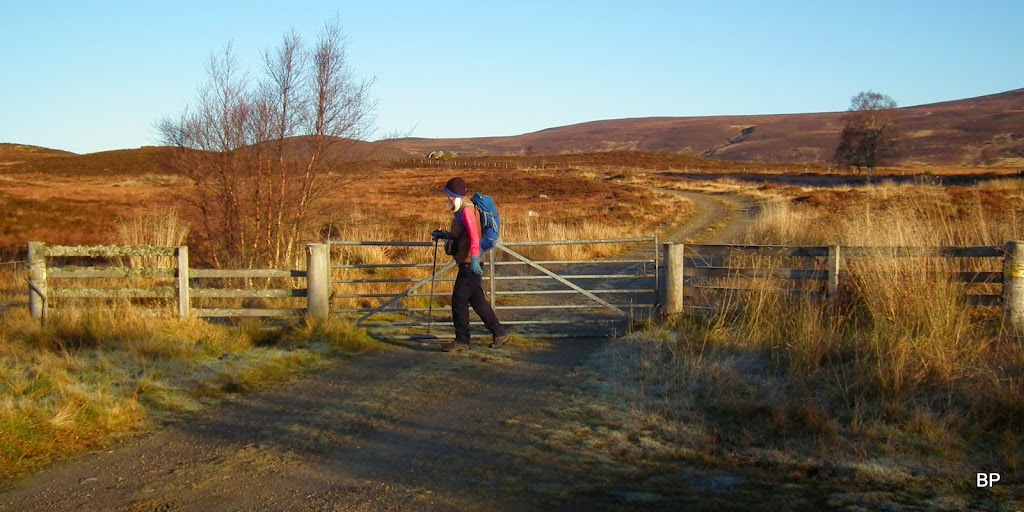 The first 2.5km of the route are very easy, on a good track due north, and with nice views around: 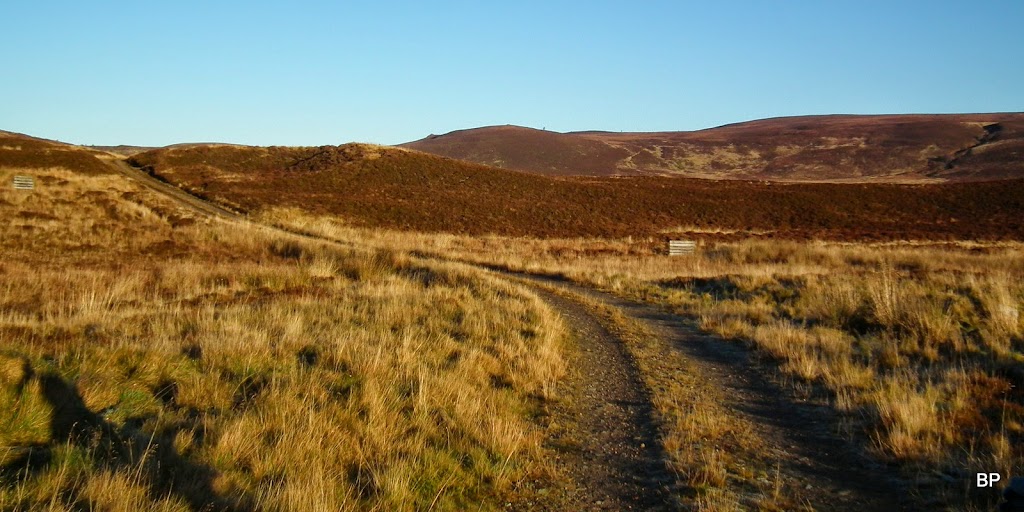 To the east, an outlying top of our Sub2k, called Tom Mor: 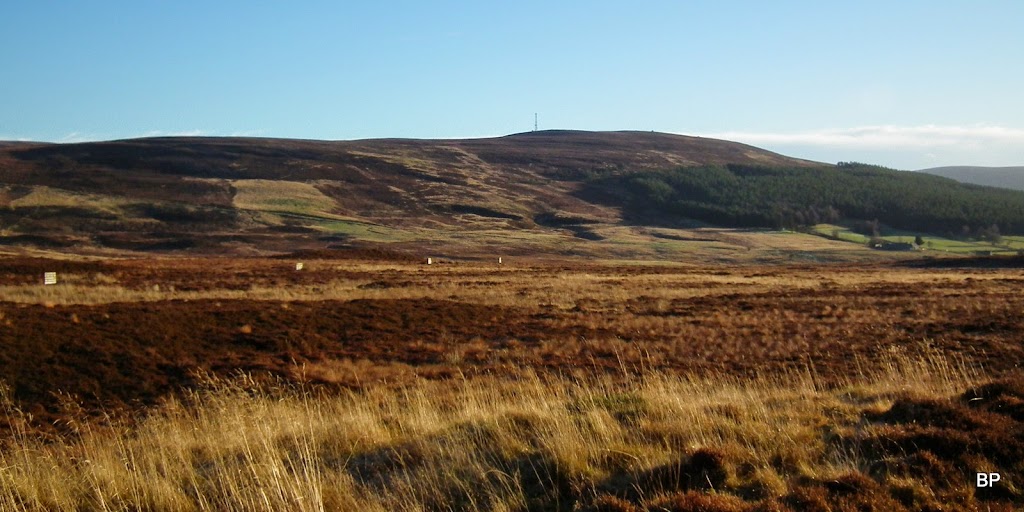 Looking back south, with the sun hanging low, we could just about make out the outlying line of the Cairngorms:

The track begins to climb and it passes through an area scattered with large rocks: 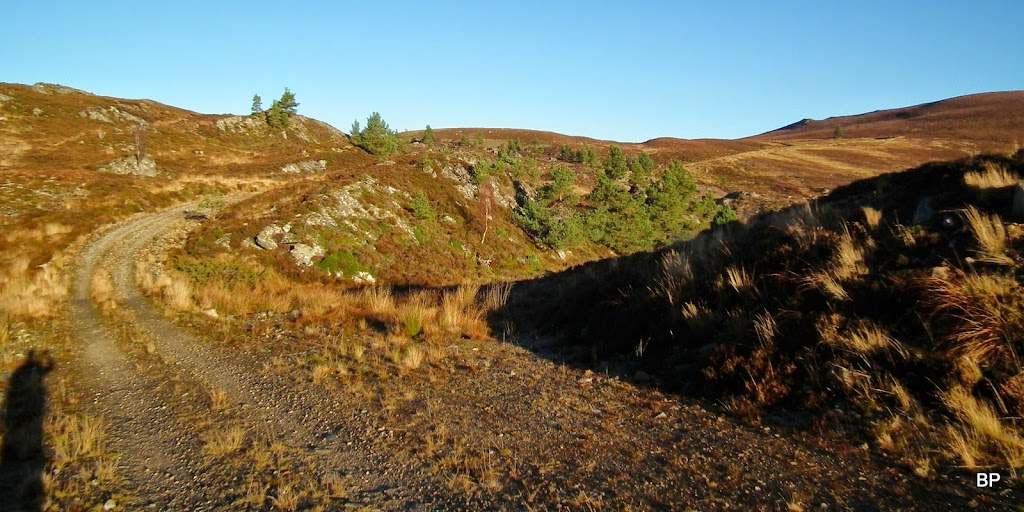 We reached the highest point of the track (which continues north and down the other side of the hill) and turned right to climb the lower top of our target hill, Sgor Gaoithe. Here, the easy-poesy part of the walk ended. First, we had to find a way over a barb-wired fence. Luckily, it wasn't too high and we are experienced fence-climbers, managed to get across without torn trousers

Second, we had to embrace the overgrown slope up Sgor Gaoithe - lots of high heather and hidden pitfalls, lumps and bumps. To my surprise - much drier than expected (or was it just the effect of the frosty night?) and I quickly discovered that it was an enjoyable type of exercise! 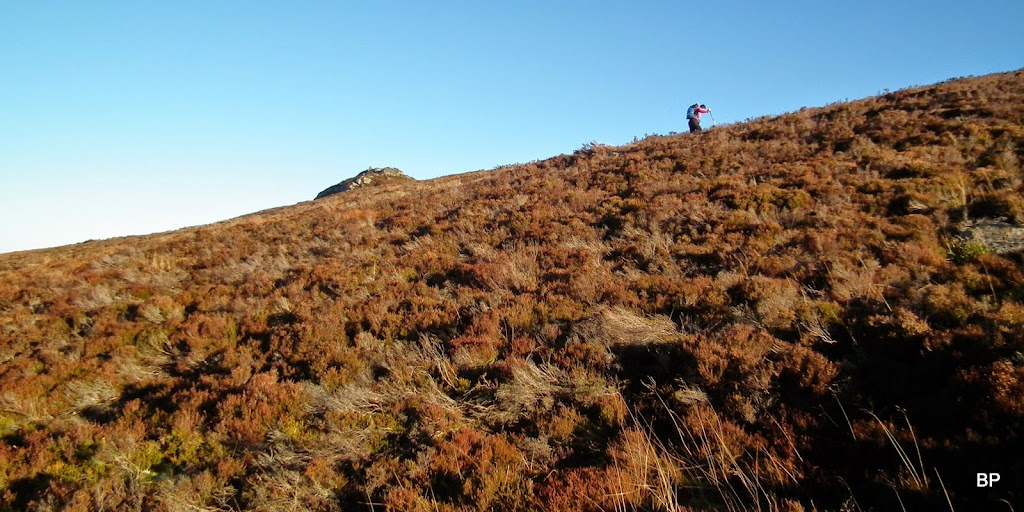 Looking west from the slopes of Sgor Gaoithe: 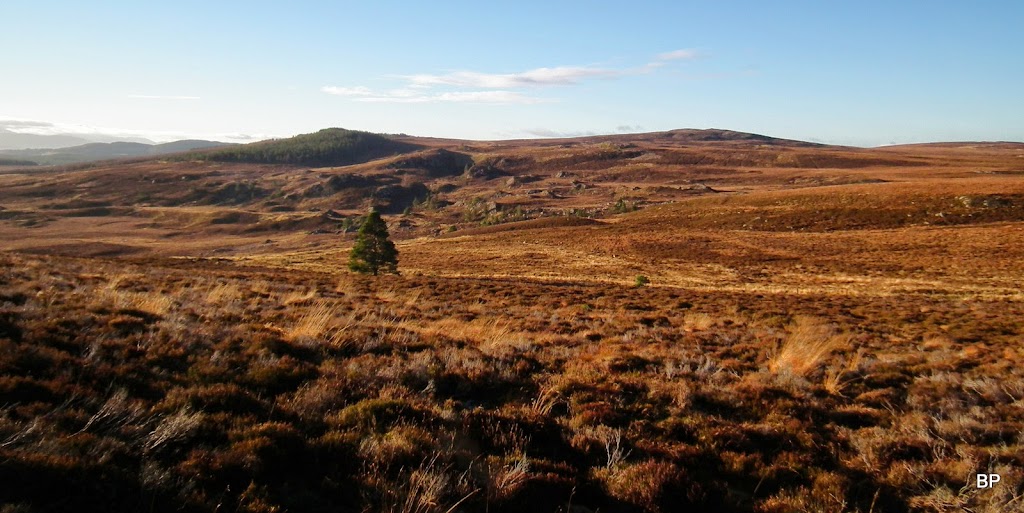 The Knock of Braemoray to the north: 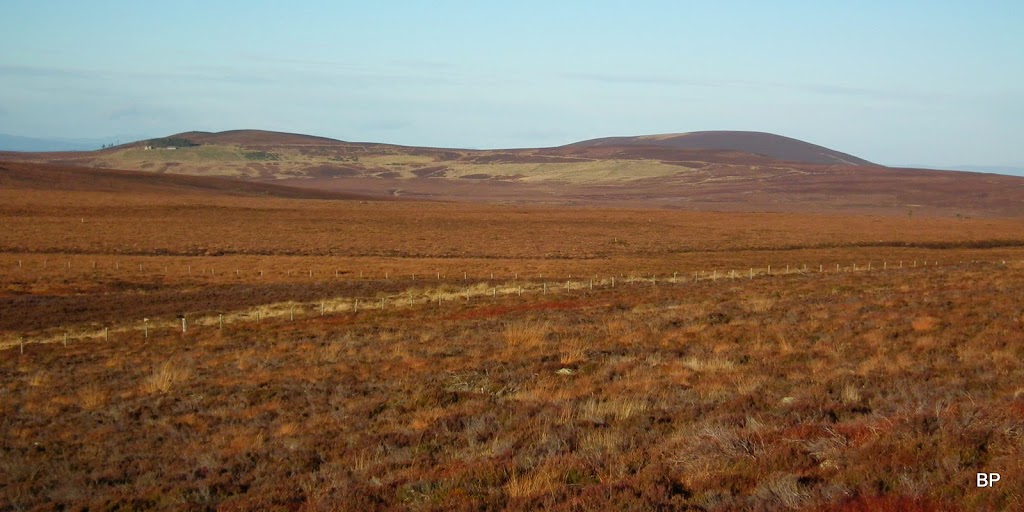 It didn't take us long to locate the summit of Sgor Gaoithe (marked with a small cairn). We stopped here for a few minutes to take photos - the light was great! Our target was not far away, either: 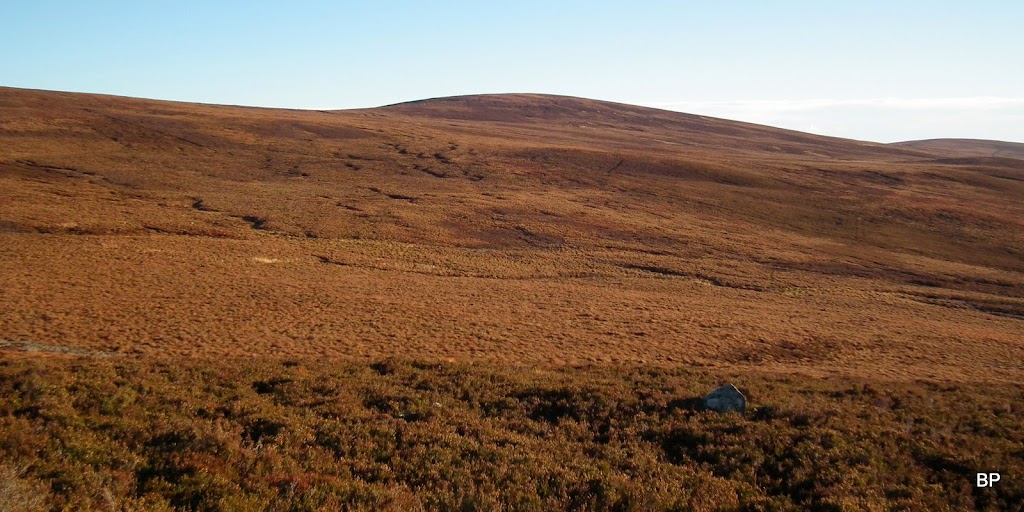 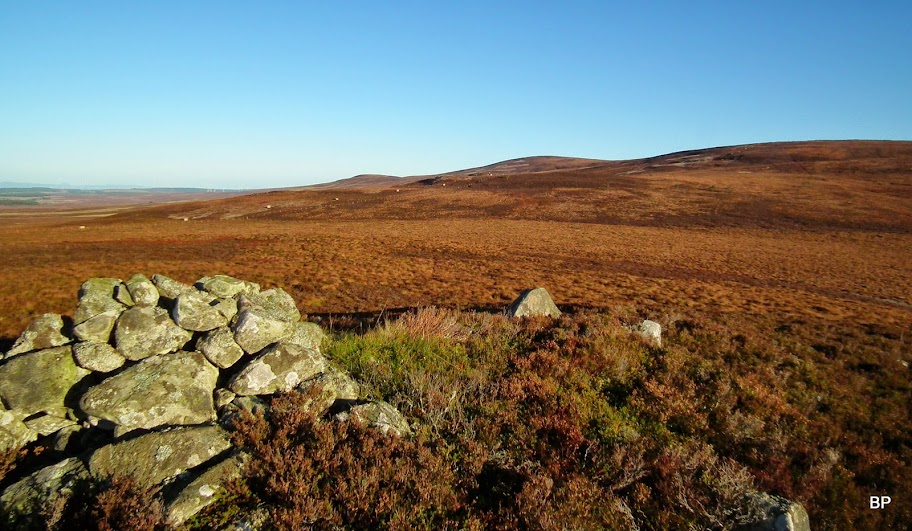 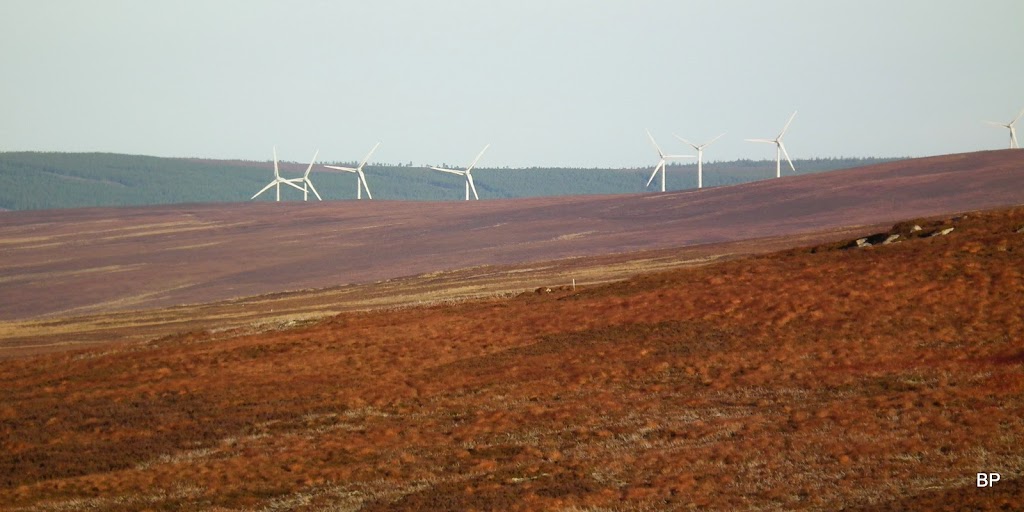 From the subsidiary top it is less than 150m of ascent to the very summit of Carn na Loine, but the whole 2 km of walking are pathless and quite overgrown. We picked an ascending line aiming at the col between the summit of our Sub and Carn an Fhuarain Mhor. Soon we found a sort-of-a-path along the edge of deeper heather (seen in this picture):

Once on the "ridge" we followed a faint vt track along a line of grouse butts, which took us straight to the summit. There is no cairn here, no larger rocks to sit on - just a trig point: 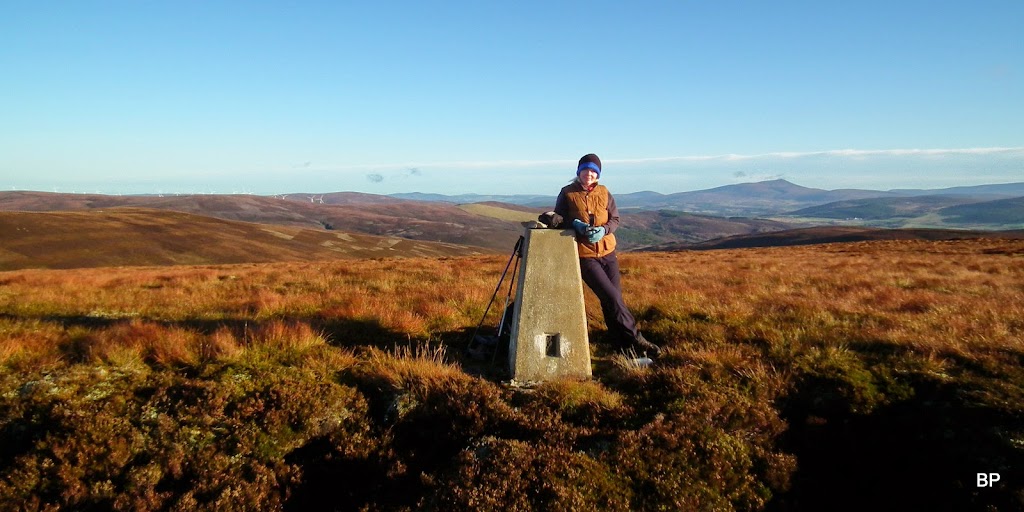 ...but views are much better than one would expect from a Sub2 in Moray. To the north-east, Ben Rinnes is the dominating feature in the landscape: 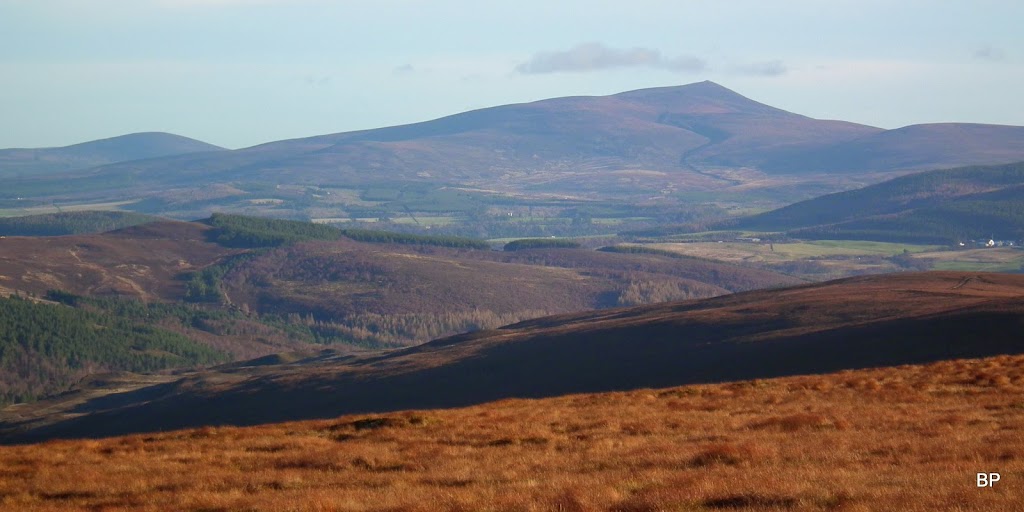 Peeking from behind, Little Conval (I think Meikle Conval is hidden behind Rinnes - or am I wrong?): 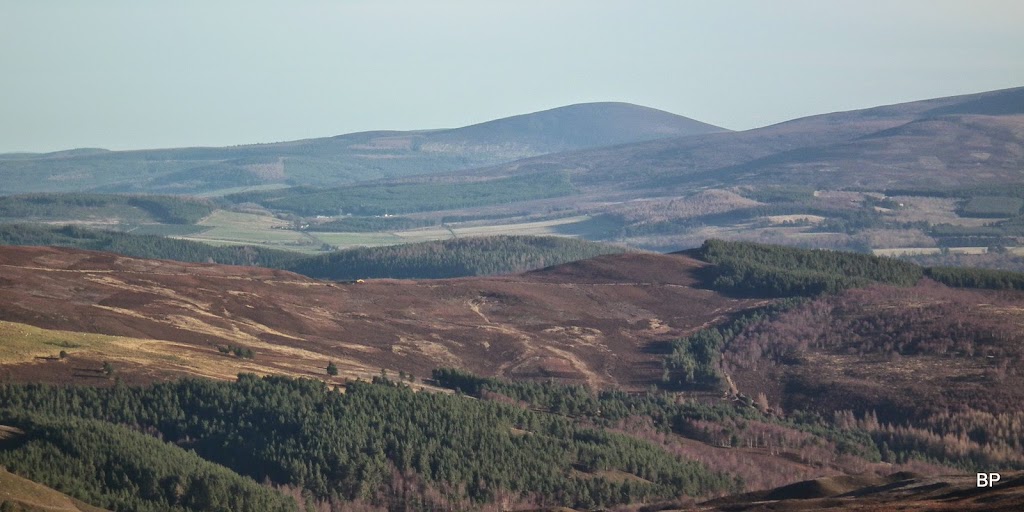 River Spey and the Cairngorms again, hard to photograph in the low sun: 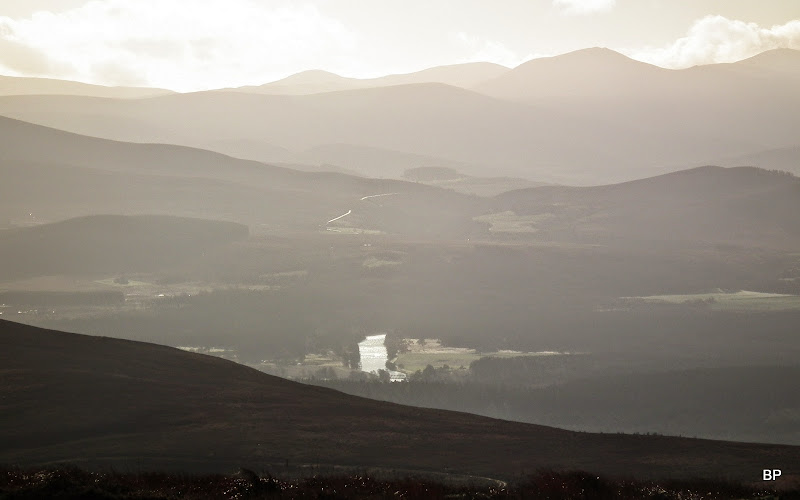 Three people on the summit???? No, it's two people and the trig point 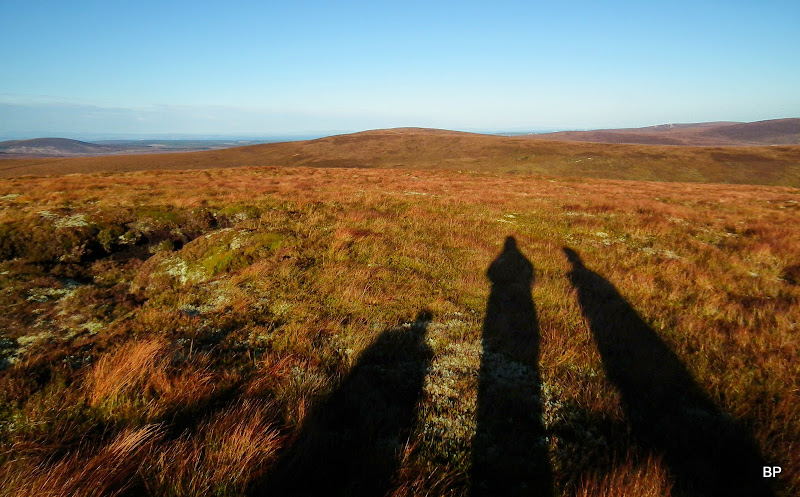 We planned a longer break here, regardless of the cold (it was below zero now, and the wind picked up, wind proof jacked proved useful). Kevin played with the camera again, using trig point as a tripod, eventually we took a decent photo with Rinnes in the background: 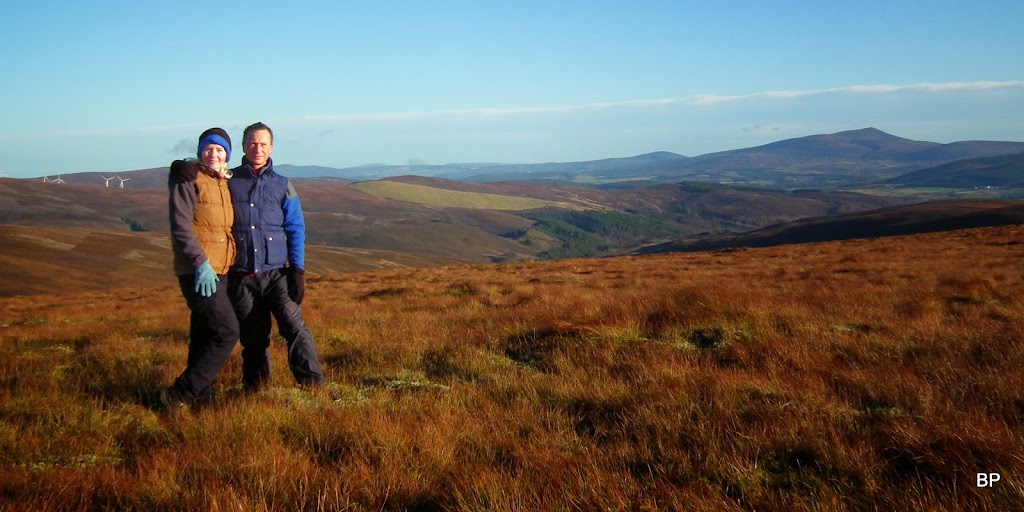 We had a quick cuppa to warm us up and then started to descend towards the nearest track - to make a circuit we walked south to the track circling Tom Mor. The slopes were overgrown and a bit wet, not too bad though. We reached the track at its bend: 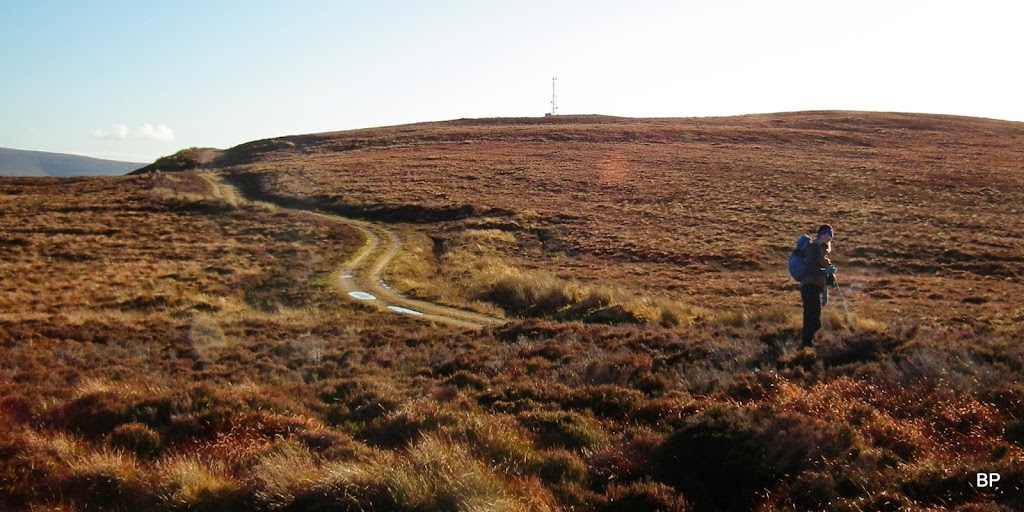 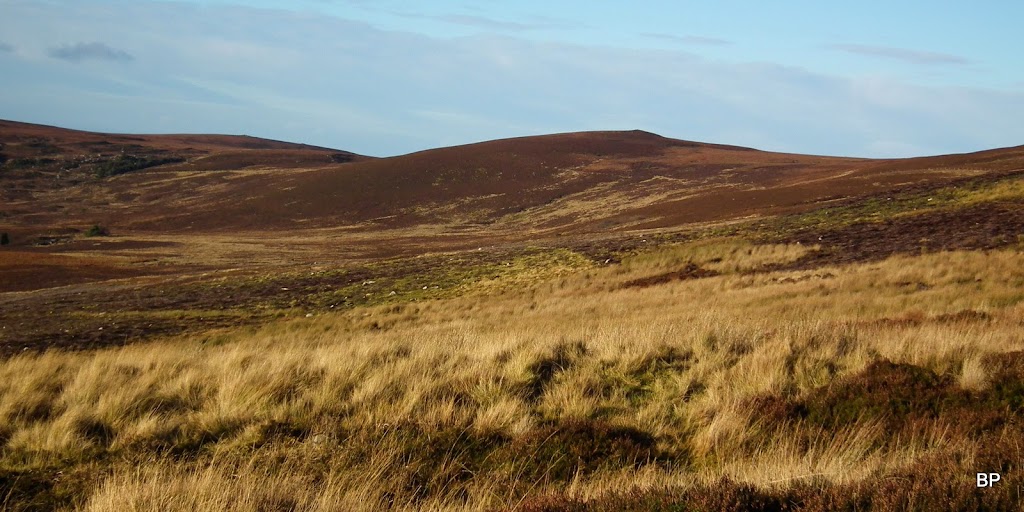 The rest of the descent was now a formality, good underfoot and nice views, too. I was happy and meowing, three walking weekends in a row in November? How often does that happen? The mast on Tom Mor: 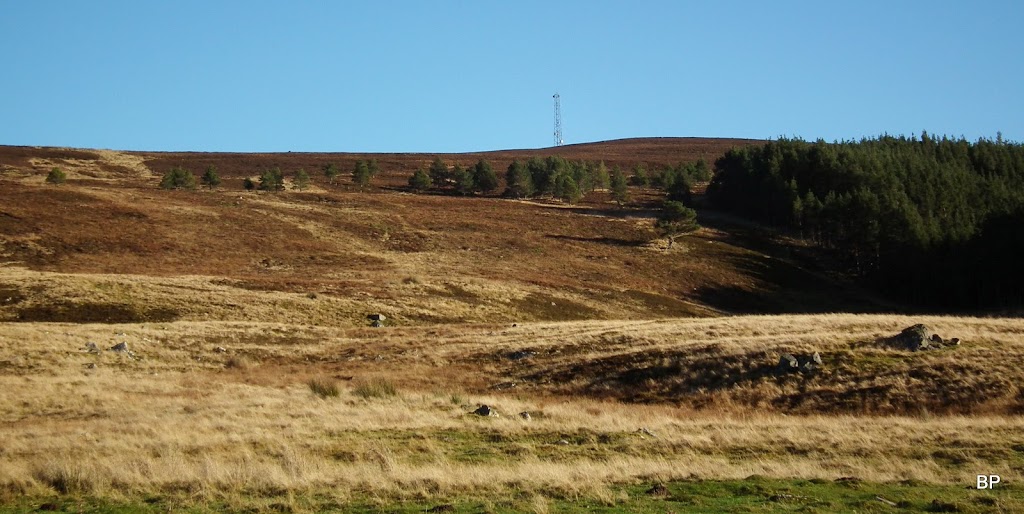 The track passes a couple of farms... 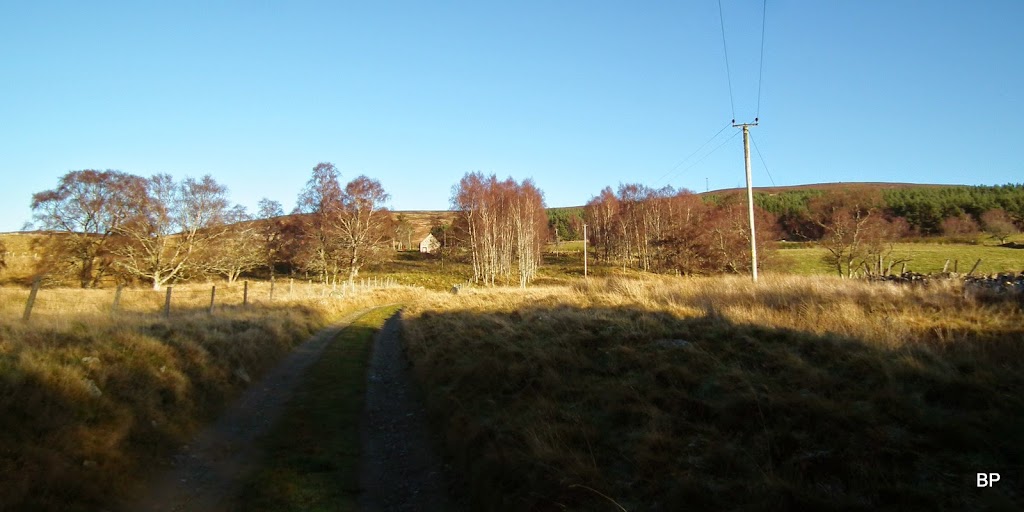 ...and eventually joins the tarmac road, about 1 mile away from the starting point: 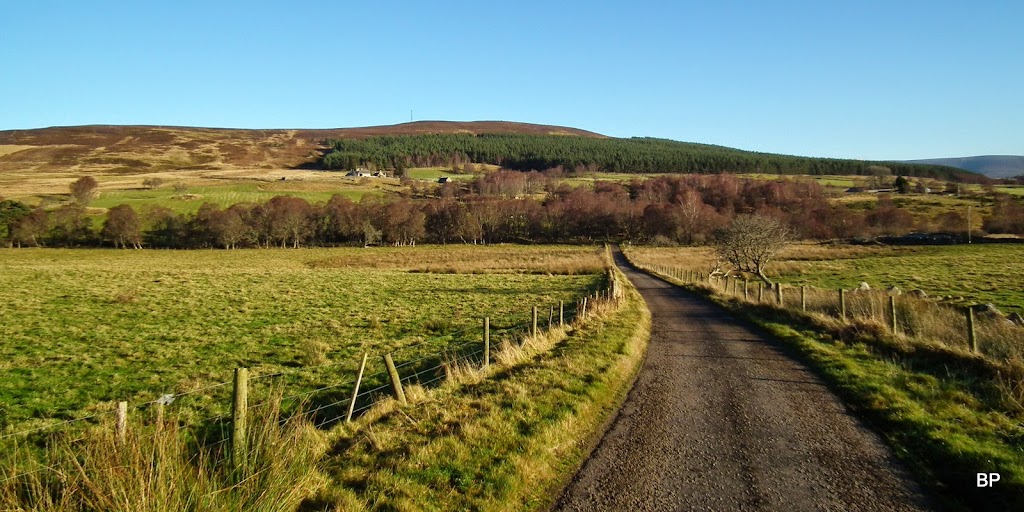 A fine small hill for half-a-day walk. May not be as exciting as some higher mountains, but it's worth climbing if one happens to live/stay nearby. Despite the pathless section, it's easy and the short circuit can be finished in 3 hours or even less if you're fit. Would be even better in winter conditions.
Speaking of winter... Where is it? Last year the first proper snow on the higher peaks fell in the first weeks of November. I'd love to see some white stuff soon. But even without it - I'm still looking forward to more meowing on the hills!