Danny and I boarded the 8.30am bus at Buchanan St. Bus Station and headed on down to Bubbas' Boot Camp in the Arrochar Alps for another epic day in the hills.

It was Danny's second attempt at conquering the mighty Cobbler and Threading the Needle having been thwarted by poor misty weather and lack of time earlier on in the year.

The bus pulled into the layby at the Succoth car park, we retrieved the mighty rucksack full of goodies, to be revealed later, stepped across the busy road and started off up the usual track towards the first objective, Bubbas Creek (not it's real name) as we call it at Boot Camp because Bubba likes to take a short splash about in it when time allows to cool down after completing the zigzag forest hill track that leads to the open hills of the Arrochar Alps. Take your pick once you get here. One of the many Boot Camp traditions is to go for a quick, refreshing 'dunk' in the creek after yomping it up the hill from Succoth for the past 40 mins.

It's the quickest way to cool down and has great views over to Ben Lomond.

As we say at Boot Camp there's no 'elf ' n' safety out here in the wilds, just common sense. If it don't feel right don't do it. Bubba likes to spend sometime here just chilling after his swim, listening to the sound of the Rabid River ( not it's real name) and having a drink before tackling the next section to the Narnain Boulders. After coolling down we headed on up to the Narnain Boulders.... two big , 'pebbles' that Bubba believes rolled off the slopes of Ben Narnain in prehistoric times and crushed some poor cavemen out hunting and who are probably now still lying underneath the boulders as we all walk past on our way to the Bens and glens further up the path.
Anyway enough prehistoric drivel ..Danny took off up the smallest of the boulders with the greatest of ease. A lone trekker past by underneath just at that point unaware of what was going on just above her head :lol Danny did a celebration jig on top before it was Bubba's turn.

Having scaled the larger of the boulders, for the first time a few weeks previously on a similar jaunt up to the Cobbler with some more Boot camp recruits, Bubba scaled this smaller boulder with ease. Successfully completing this section of the Bubba's Boot Camp Induction course we crossed the Butter Burn and scrambled up to the main event, the Threading of the Needle! DaDaDaaaaa.

As soon as we reached the summit Danny headed straight for the challenge without further 'adoo' or need for encouragement, crawled through the eye and straight up before I could get the camera focused I took a few snaps and then scrambled up for the umpteenth time with some 'light' refreshments to celebrate the occasion as we do at Boot Camp. We chilled out for a while on the summit, taking the time to enjoy the 360 degree panoramic views that open up from this particular vantage point whilst sinking a beer or two. Looking over to Ben Lomond and the three lochs, Loch Lomond, Loch Arklett, and Loch Katrine to the East down to Arran in the South West and North to Ben Cruachan and beyond. Danny is enjoying his first beer of the day. After sinking the beers we scrambled back down and through the eye to 'terra firma' once again. Having conquered The Cobbler and Threaded the Needle successfully we set about the next Boot Camp tradition for new recruits, the Bubba Q.

Normally this 'sacrificial offering' is carried out on the summit of the Needle itself, but it started to get rather busy as more walkers had arrived whilst we had been sitting up there supping our beer so we moved off to an ideal spot about 50 yards back down the hill, but still within distance of the Needle to appreciate it's presence as we set about our 'pagan' ritual of devouring 'dead cow' cooked on an open fire using a 'wheel trim'

Hence The Wheeltrim Bubba-Q! Don't blame me if you have a missing hub cap though As the steaks were sizzling, we took a few moments to chat with Freddie a local man from Succoth who delighted in sharing his knowledge of the area and alternative routes which we hadn't yet tried.

We had bumped into him earlier on when we had stepped off the bus at the start of the trek and he had taken an alternative route from Ardgartan up to the Cobbler. Just as we were about to enjoy our steak and beers, we were joined by a mutual friend of ours who happened to be passing by just as lunch was ready. She had seen the smoke signals from further up the mountain wafting across the Cobbler and guessed it could only mean one thing, a Bubba-Q and that Bubba the legendary 'steakman' must be some where close by.

Following her nose and the smell and sounds of sizzling Ribeye to where we were 'camped' out, she paused for a few moments for some 'selfies', graciously refused our invite to join us for 'lunch' and skipped of down the mountain.

We grabbed another beer, cut some steak and sat down again to 'chew the fat' for a while enjoying the warm rays of the sun beating on us, whilst watching some small clouds drift by below. Absolutely fantastic day to be out on the hills 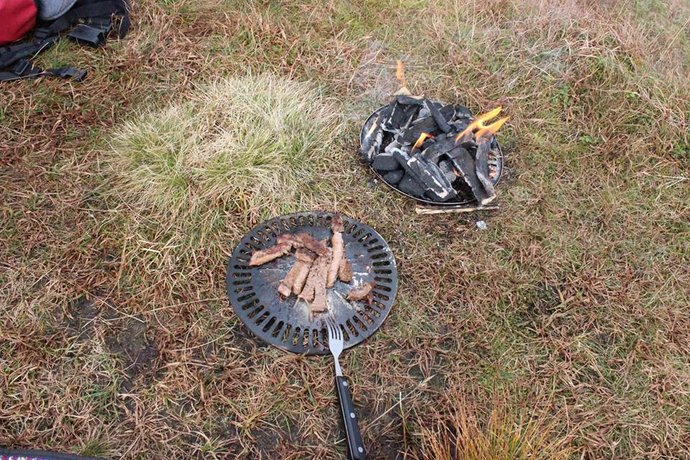 After the Bubba-Q was tidied up and stashed away, the final Boot Camp tradition is the Saltire Salute to God's great creations Danny showed his allegiance to the 45' and we took a moment to reflect on what could have been and what will be eventually one day, 1745.