If today was an example of global warming, let's have more of it - walking on 30th Nov in a t-shirt, with the sun dazzling you, hardly a cloud in the sky, a little gentle breeze occasionally, what could be better

Certainly the forecast for today was good, but we have all experienced good forecasts before

) so the route was loaded into my phone and I printed off the WH route which turned out to be a good idea, especially for the first bit where you have to negotiate gates, left & right turns until you reach Glen Kendrum

Set off from Fife at 7.15 and arrived in the large car park at Lochearnhead at 8.25 and soon hit the road. There was a chill in the air and I made an executive decision not to be a wimp and leave my gloves in my rucksack - turned out to be a good idea as I soon warmed up The picturesque Episcopalian Church as described in the WH route Not exactly road worthy, in need of a bit of TLC or towed away to caravan heaven I had considered bringing my bike and glad I didn't as I would have ended up pushing it for mile after mile, as the track although great to walk on does rise nice and gradually. Coming down on a bike would have been rather rapid and would probably need to replace the brake pads sooner rather than later The burn that requires crossing, flip flops not needed

Once you reach the highest part of the track it is then time to turn right and head steeply upwards. There is no obvious path to follow not that I normally bother with paths

However I noticed a fence post quite a bit higher up, so decided to head for that as I figured if someone can plonk that in the ground that is good enough for me

Whilst pausing to admire the views I noticed I was being followed (by a lurker), more of that in a minute A nice shadow, but the shot highlights the gradient

One of the good things about Corbetts and the wee'r hills, the steepness and out of breathness doesn't last as long

It wasn't long before I was prowling around the summit taking in the awesome views, I was hoping to experience another Brocken Spectre, as the sun was beating down and there were pockets of cloud floating down the glens. So I was moving rapidly to the edge of the summit to get myself onto the horizon, with the sun behind me, just about made it before the cloud disapated Brocken Spectre, not the best photo

When I returned to the small summit cairn it was then that I was joined by David (stirlingdavo), we got chatting and David admitted to being a lurker on WH, maybe now he might post a wee bit more

I asked David if he wanted to join me & we never had a moments silence for the rest of the day, even when I was needing a stop to 'admire the views' 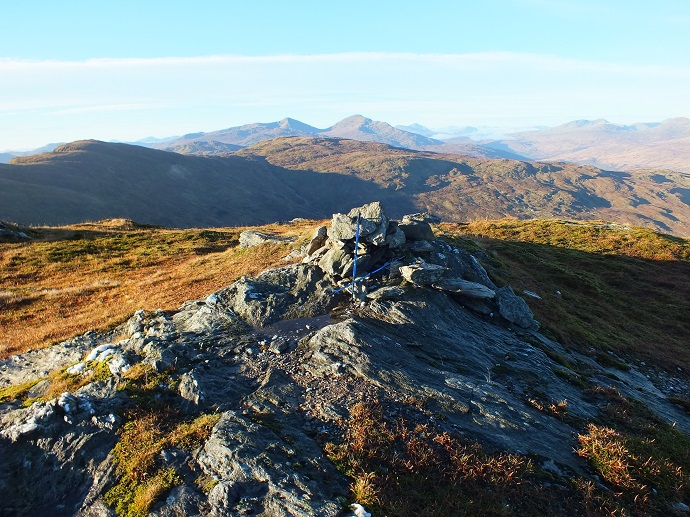 Summit with Ben More in the background Anyone know what the pointy hill is? Once on the track we turned right for a few metres and then turned left following a faint path across the heathery grass before the ascent of Meall an t-Seallaidh. As David and I were talking almost non stop we seemed to reach the summit in no time

For some reason I didn't take as many photo's, not sure why and I didn't even take one of the summit trig on Meall an t-Seallaidh

Here are a few photo's from the summit, had fantastic views of Loch Earn along with Ben Vorlich & Stuc a Chron and the other prominent Corbetts Ben Each, Ledi & Vane St Fillans (zoomed) at the far end of Loch Earn The descent off Meall an t-Seallaidh was pretty non descript, we tried to follow the WH route but if there is anything resembling a path we didn't find it

We could see the track in the distance so we adopted a fairly direct route avoiding any crags that appeared.
The descent down the track was very easy, we did meet a chap heading uphill 'in shorts' but going at a fair pace A big thanks to David, was great to meet you, hopefully we will meet up again

Don't forget to check the 'Meets' section, that way you could have company on some of the more "adventurous" walks

Weather permitting I may even venture out again this week - Next

There's definitely nothing wrong with frequent stops to admire the views Martin. It's an integral part of all of my walks

Glad you got the views for these two

I agree, global warming must have something to do with November's weather this year... We were out yesterday, too, Corbett bagging again, walked in thin tops up on the ridge and sweated like hell!

Some autumn we have had so far... But deep down in my heart I miss the snow. What can be better than crampons & ice axe adventure on a bright crispy winter day?

That weather front you zoomed to has reached us (we were in Ardgour) just past midday, but it was just patchy cloud and a bit of wind. Another good weekend under the belt, have we pushed our luck too far? I bet next one will be wet, windy and miserable

I agree, it was a cracking day yesterday, I headed up Ben A'an and had to take my fleece off, I actually got to sit and enjoy the summit a complete contrast to my visit to Ben Vorlich last weekend. Looks like you had a great day out in t he sunshine and were rewarded with fabulous views.

Martin was hoping I might join you but leaving from Inverness I thought better of it and did a we Corbett en route back to Carnoustie (Conachcraig) NE of Lochnagar, a quick up and down travelling light and back home for lunchtime. Fabulous day though, glad you got the two done, by all accounts reading PeteR's report the start can be somewhat confusing

Aaah I've been outed as a lurker!!

It was a great day though and really nice to meet you Martin. Maybe see you sometime again in the future. I'll probably be lurking in the shadows though.......

Great report, Martin. Looks like a lovely pair of hills. I can never keep to paths either - especially if they have zig-zags as I just keep going without noticing the bend

As for stopping to take in the views, they seem to be getting better and more frequent the older I get!!!

Nice one Martin, this looks a good day out. First time ive seen a sign like that re dogs