Left early for the relatively short drive down past Carsphairn then up the single track road to the car park near Forrest Lodge.


Corserine 30nov2014 activelog.gpx Open full screen  NB: Walkhighlands is not responsible for the accuracy of gpx files in users posts
Set off from the car around 0700hrs – only needed the head torch for about the first half hour.

Quite a few signs going up through the trees to point the way. Found the big boulder and crossed the burn.

Once on the open hillside the sun started to appear

Small cairn on the way up 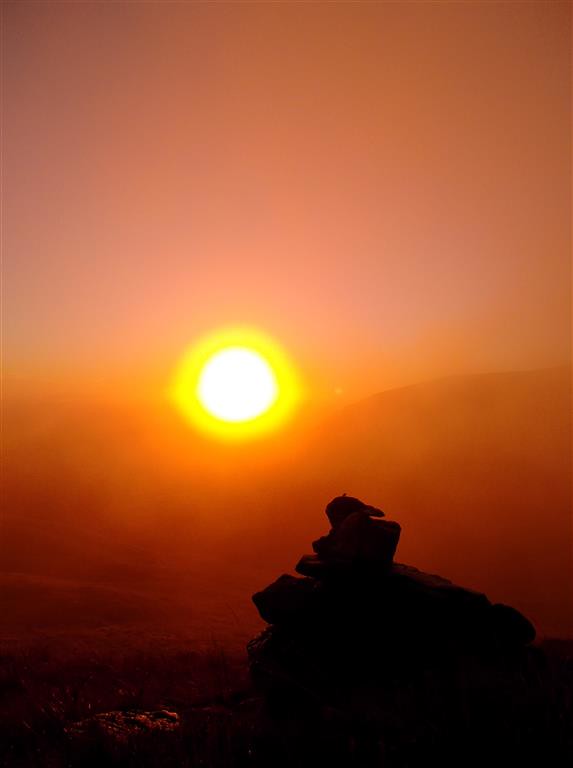 Going round the top of the corrie, could see over to the Donald, Carlin’s Cairn – clag blew over not long after and decided not to walk over to it

Mist blowing over then clearing with the sun strong in between. Headed off down the Rhinns of Kells.

West towards the Galloway hills

Then on towards Meikle Millyea

Returned to the trig then the return leg down NE

Met a few walkers on the way down. Back at the car, the car park was now pretty busy. Unpacked and drove off up to Carsphairn.


Cairnsmore 30nov2014 activelog.gpx Open full screen  NB: Walkhighlands is not responsible for the accuracy of gpx files in users posts
Parked in the wee layby just off the A713 at the Green Well. Had some lunch then set off up the track towards Cairnsmore.

Looking back to where I’d been in the morning, more cloud had arrived there as well

Up the track, walked past Willeanna then straight up Dunool

Into the cloud for the walk up Black Shoulder

Occasional glimpses when the cloud cleared but then it clagged over again.

Summit in clag – waited for a wee bit but no sign of it clearing so set off on the descent following beside the dry stane dyke.

A good couple of hills to pair off, RH - makes for a good stroll
You had cracking weather - like the pics, esp the sun over the trig point

I love all shots of cloud "creeping in" over the hills. Ah, and good to know, I'm not the only one keen on photographing trigpoints

Great photos - lovely introduction to this area for me. This has been an amazing November all over the country. Thanks

Nice photos on what looks like a great day. The south-west top of Meikle Millyea at NX516825 is 3m higher than the trig point and is the Donald. Good job you walked over to it. (if you are ticking the Donalds!)

I grew up down there and walked those hills as a kid.

Your photos are perfect. I'm getting sentimental now

Users browsing this forum: jmarkb, Owen b, PeteR and 27 guests