It was probably the hottest day of year,the 7th of June 2013, when 'a bunch of Kindred Spirits set off to conquer Ben Vane (916m)

This was all that was left of the original 54 names who had all pulled out for various reasons, one of them being the weather report of scorching sunshine, high temperatures and warnings of dehydration and heat stroke.

The trip had been cancelled already back in May due to people pulling out and the coach that had been hired for the original trip had to be rebooked for the 7 June. So the remaining 'bakers dozen' were determined they were not going be put off by mere warnings of being scorched to a frazzle in blistering desert heat.

Bubba was appointed 'trek meister' for the day as he was the only person that had tackled this particular munro previously . Bad mistake!

Knowing that there wasn't going to be much in the way of water once we were on the mountain itself as there were no watersheds along the actual path itself . Bubba hatched a 'cunning plan' and brought along 2 bags of ice and 2 dozen small bottles of water to make sure everyone was well hydrated on what was to be a tough, but enjoyable trek.

We arrived at Inveruglas car park around 9.30am after redirecting the coach driver who somehow thought we were going to Arrochar and took a wrong turn at the Tarbet Hotel turning left instead of right on the A82.

After distributing the water and the ice amongst the group to their bemusement as by now the ice had started to melt and seep through the cheap holdalls, we set off along the road past the SSE HYDRO station to the tarmac road that takes you all the way up towards Loch Sloy , Ben Vorlich on the right and Ben Vane on the left. 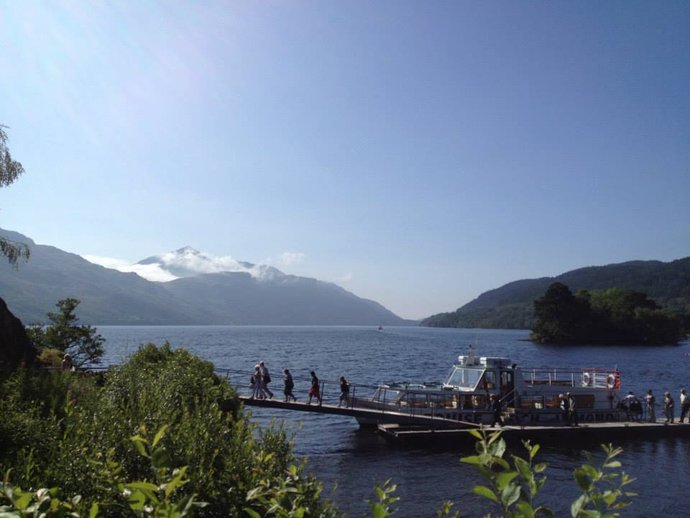 We were all in high spirits as we wandered up the road.

Enjoying the sunshine and taking in the views that quickly unfold along the way.

We could clearly see the tops of all the mountains and also for quite a distance as it was a bright, sunny, cloudless, clear blue sky day with no wind and the lochs were as still as mill ponds.

Shorts and t shirts were the maximum dress code of the day and even then it was difficult to keep cool.

Ben Vane quickly came into view and looked awesome if not intimidating.

As we got closer we could clearly see it's craggy features, the cave and the scree path all the way up to the start of the five false summits. We quickly got to the iron bridge, crossed over the river that runs through Coiregrogain Farmstead and on over the stone bridge before starting our ascent though the tall, fern covered path to the 'shoulder' which is normally a mud bath, but was bone dry on this occasion due to the extremely good weather we had been having around that period. We took a few minutes to rest, take in water and get some group photos. Everyone was relaxed and just enjoying the sunshine. But already a few were starting to wonder if they would complete the mission in the extreme heat. After a while we set off again up the steep section towards the Cave, but we were already starting to struggle with the extreme temperature and having to stop every five minutes to rest and drink water. Cue Bubbas 'secret weapon', bags of ice. Dadadaaaaa..... Some one had the idea of holding the thin nylon bags containing the melting ice above our head and very soon we were all 'scrapping' for a turn at having an ice cold shower from the ice melt which by this time was running out of the bags and down our backs and necks.

It certainly boosted moral knowing that you could have an ice cold drink or shower in the middle of this barren mountain and keep the rest of the drinks chilled all the way to the top. The group by this time had spread out as usually happens as we all fought our own personal battle to combat the heat and get up this mountain which had now been renamed Ben Insane. We slogged it onto the cave and were relieved to reach the cool shade that the overhang provided and escape the intensity of the sun. We quickly fired up the BubbaQ got some burgers on for lunch and just enjoyed the stunning views all the way to Loch Lomond , Loch Arklett and Loch Katrine. After a good rest, some hot food we were ready to tackle the next section of steep scree and false summits. We were on no rush and had allowed ourselves plenty of time to complete the walk.

We took our time and stopped whenever we felt the need too and allow time for banter and to drink some water. The views were just awesome the whole day and you could clearly see the other Arrochars like A Crois and across to the Bealach a Mhaim which bridges Narnain and Ime and beyond to The Cobbler.

It was a good day for really checking out the mountain features and potential routes for later excursions. Alan quickly claimed a piece of Ben Insane for himself and renamed this spot 'Love Rock' lol. 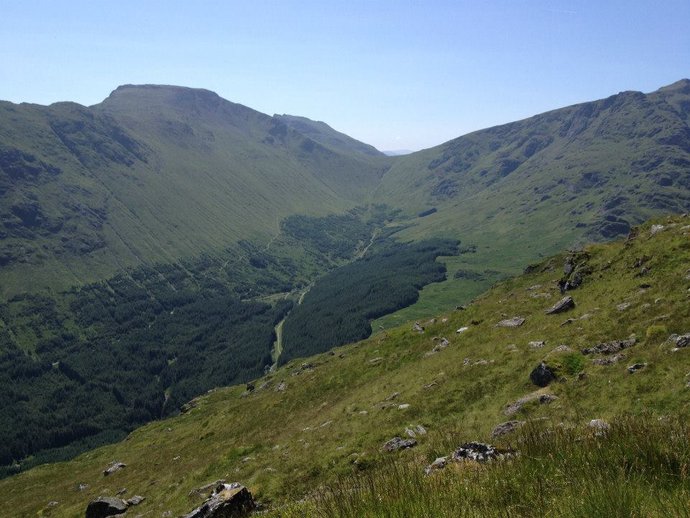 We ground our way up the steep scree path stopping every 5 mins to swig some ice cold water, enjoy the views and catch our breathe as this steep section can be fairly heavy going to the novice and the unfit. 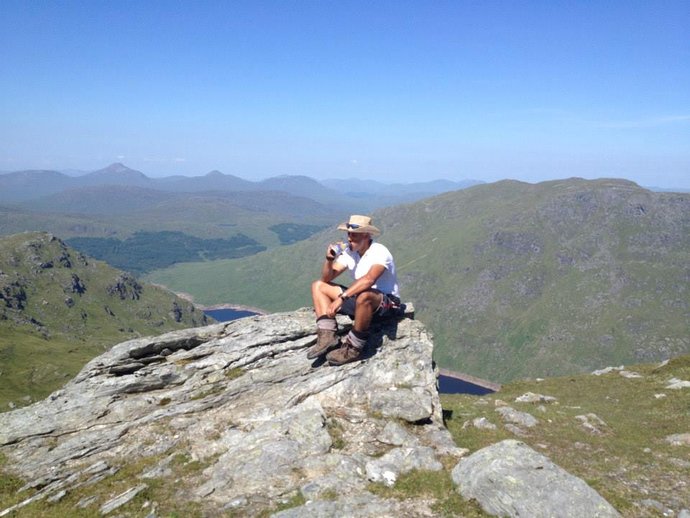 Bubba found his own 'perch' to sit on for a while, have a drink and contemplate the tranquillity and peace of the day which only the mountains provide. Also had an excellent view of the ridge walk from the summit of Narnain to A'Crois (848m) which is also an excellent little Corbett with stunning views from the top. Well worth a visit. We eventually reached the 'chimney' which is a short, steep gully and a short scramble. Finally after one last scramble we made it to the summit to be rewarded with calm, sunshine and stunning views to enjoy our sandwiches and snacks before heading back down for a quick refreshing splash of feet in the Coiregrogain burn and the coach back home.

Looking across to the trio of Narnain, The Cobbler and Ime

Mission accomplished against all the odds of scorching weather and potential heatstroke avoided by the ice cold bottles of water.