Day 1: Fort William to Bunarkaig (21km)
We spent the time on the 8.22 train from Glasgow Queen St to Fort William finalising our route. 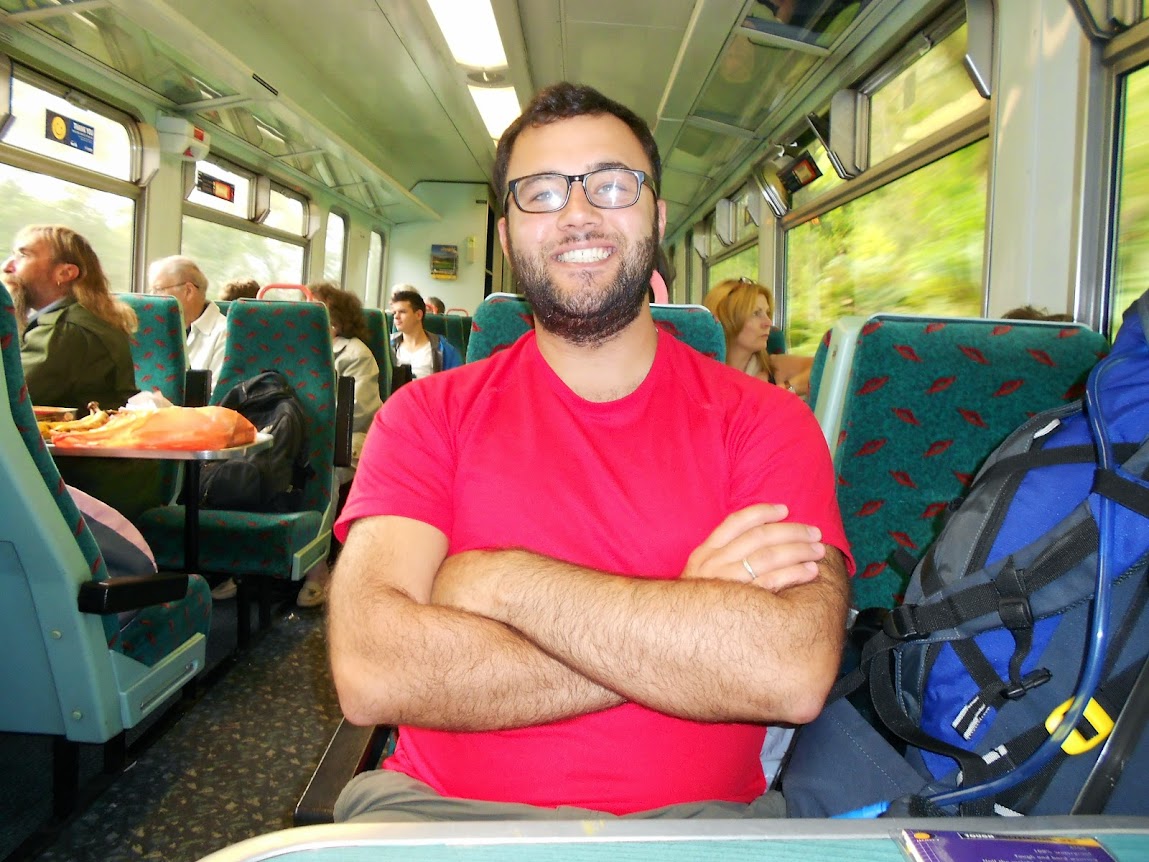 After lunch at Weatherspoons in the Fort, we set off.
The walk starts in Fort William, marked with a signpost. It's not the best location, directly opposite Morrisons supermarket, adjacent to McDonalds. 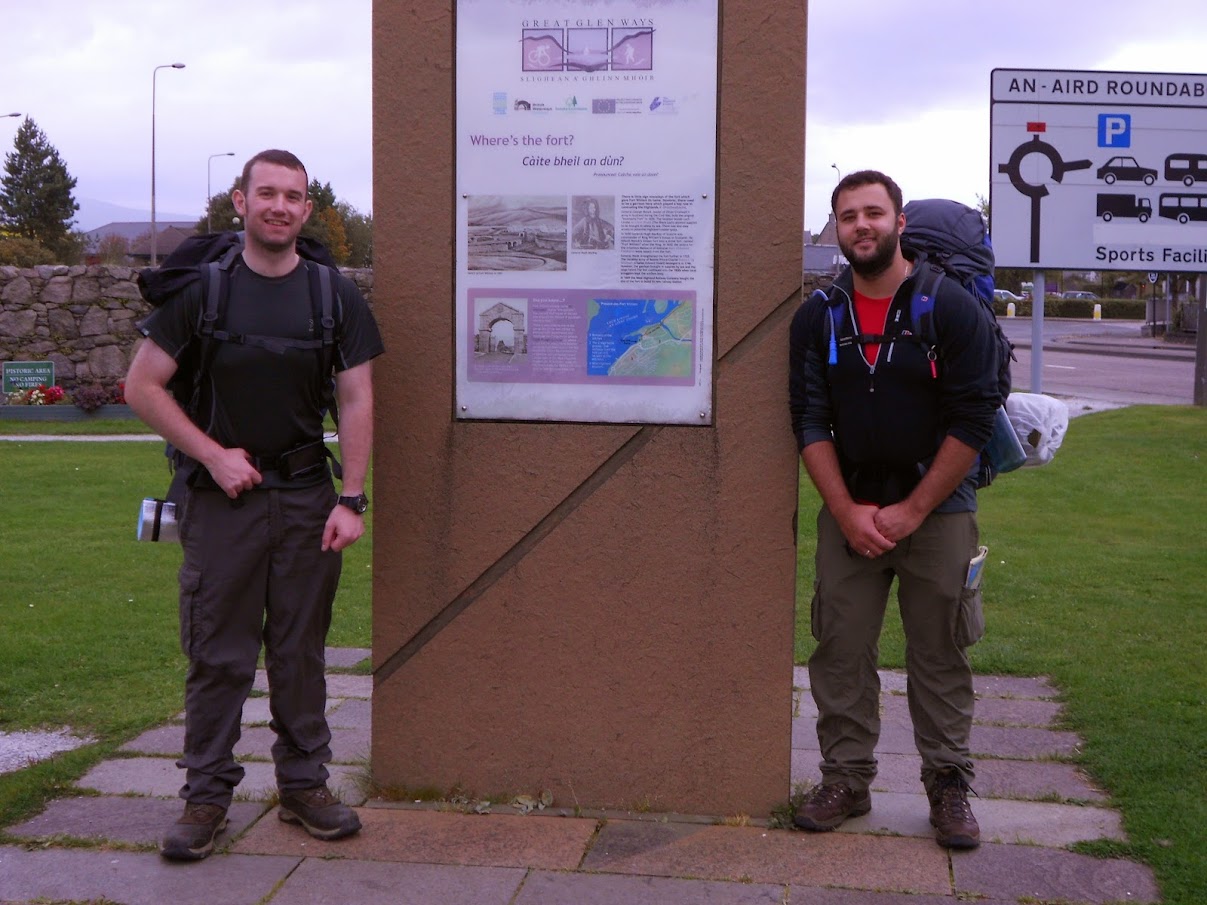 The first few miles of the route are spent weaving through the streets of Caol (towards Corpach) housing estate, nothing particularly wrong with it, but why the route is designed that way is a mystery, it seems to be an unnecessarily circuitous route through an urban area, when starting the route at Neptune's Staircase would make more sense (see the route highlighted here).

An old ship lying on the beach near Caol, opposite the shinty field.

*This* is where the GGW should start, at Neptune's Staircase!

I'd always been curious about how locks work, I recorded this one (it's played back at x16 speed) - quite interesting.

What a horrifying prospect (luckily we brought the stove!) 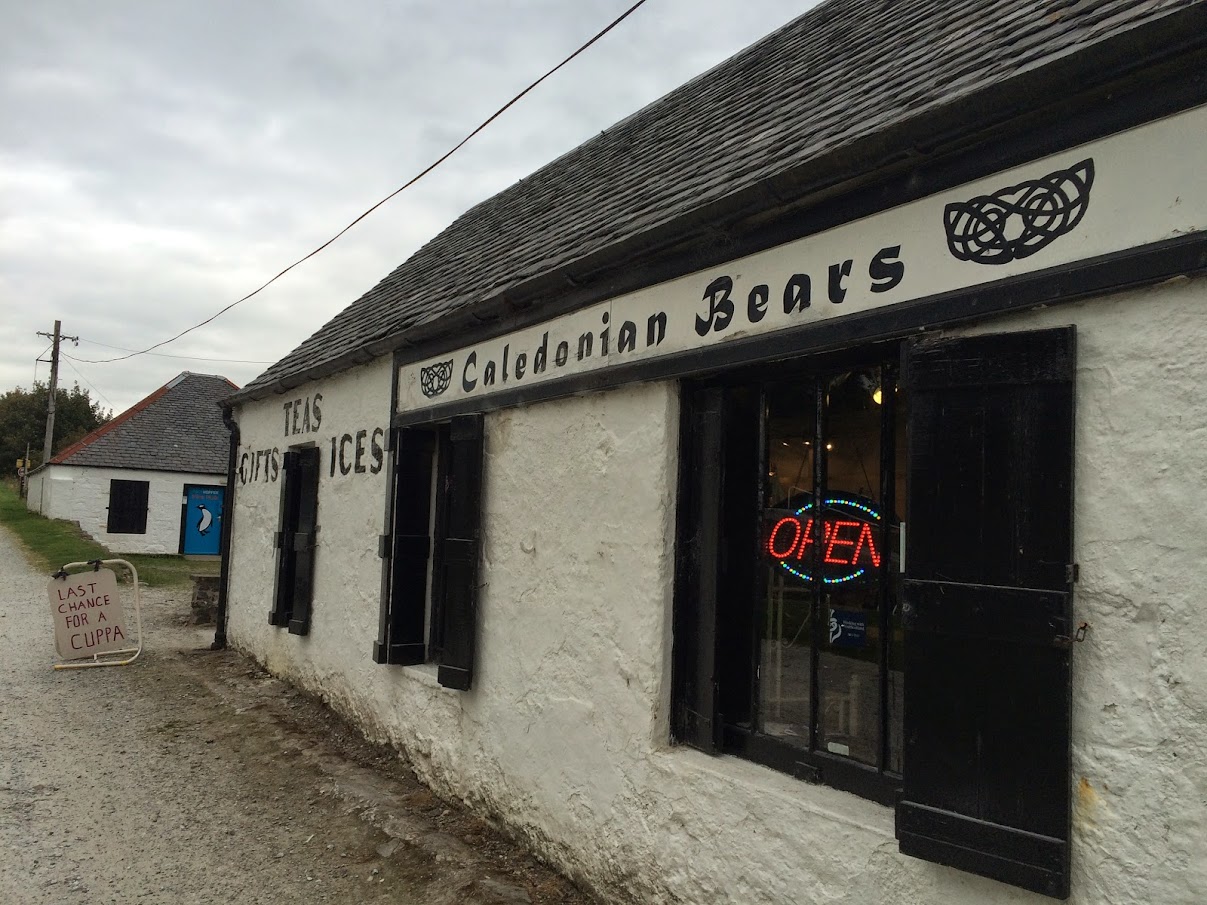 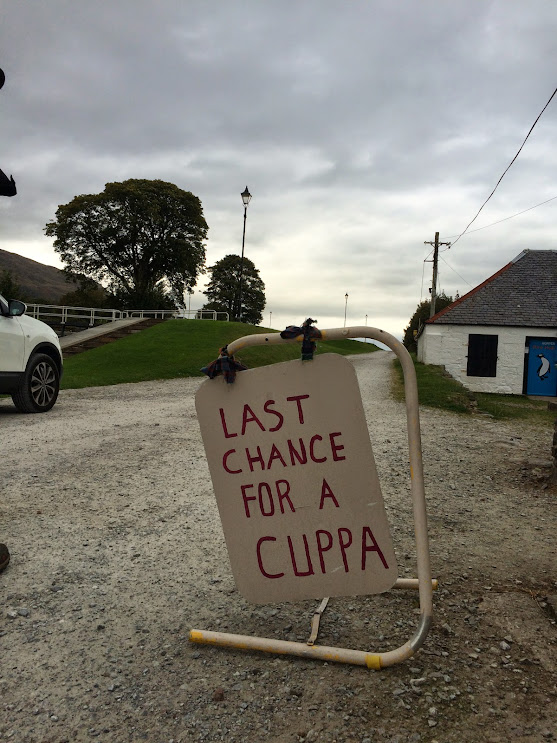 The Lord of the Isles steam train passed as we approached the level crossing at Banavie Station.

After leaving Neptune's Staircase, it's a long flat slog along the canal tow path, there's nothing particularly interesting along the way, so here's a picture of my cousin. 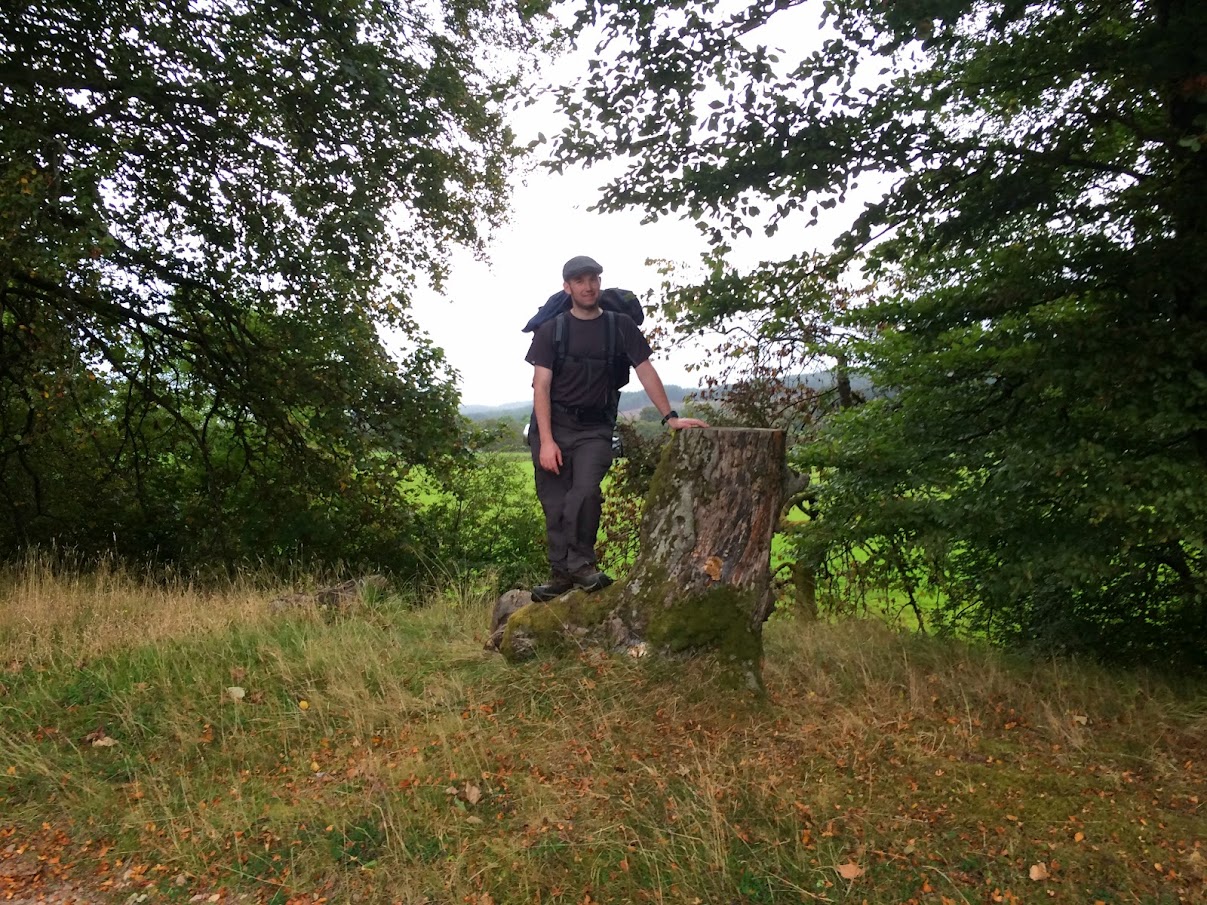 We stopped for dinner on the banks of Loch Lochy (just past Gairlochy).

We decided, despite it getting dark and wet, to push on past Gairlochy, to Bunarkaig to camp for the night, We wanted to reduce the walking for the following day as we planned to bag the two Loch Lochy munros. Setting up the tent in the dark and rain never makes for a good nights sleep though.

From Bunarkaig it's an uneventful forestry track through to Clunes. There were several plaques acknowledging the importance of this remote area to the soldiers who trained there during the war, apparently they practiced amphibious landings in Loch Lochy.

Taking advantage of the facilities.

We hid our packs behind a pile of hardcore in a passing place, waterproofed as best we could, and made our way to the munros. We expected a quick assent - but it would be harder than we thought...

lochlochymunros.gpx Open full screen  NB: Walkhighlands is not responsible for the accuracy of gpx files in users posts
The munro route initially descents through some thick forestry.

After emerging from thick forestry, we followed the bealach towards the saddle of the two munros.

By the time we reached the saddle it had begun to rain heavily, and our gear was already damp from the day before, so morale took a bit of a hit. Visibility at the top was only a few meters, so we had to take a bearing to navigate to/from the summit of Sron a' Choire Ghairbh.

We (mostly I) decided to stop for a break on the way back to the saddle.

Moisture was thick in the air, and we had to stop a few times to wring out our hats and gloves.

The assent to Meall na Teangha was thick with peat-rich mud, which almost completely subsumed our boots.
As we made the final Southward approach to the summit however, we began to hear a few bleating calls carry through the mist. It sounded to be coming up from our left (Coire Odhar Beag), then moments later from our right (Corie Leacachain). It left us feeling very uneasy. We came to the conclusion that is was probably a stag. Due to the thick mist and wind, we were unable to ascertain exactly where the sound was coming from. However, we decided to continue on, making conscious efforts to be loud - so as not to startle any stags which might be just outwith our line of sight.
We eventually made it, tired, soaking wet and terrified to the summit of Meall na Teanga. (If anyone has any comments or advice about our possible stag encounter, please share)

On the way back down we saw a few deer, but no sign of any stags.
Due to being completely soaked through, cold and tired, we decided to make for the Great Glen Way Hostel over the loch just south of Laggan.
It was dark by the time we neared Laggan, meaning we were unable to cross the lock directly to the hostel, and instead had to follow the main road over the car bridge and double back. We were very happy to get to the hostel!

Day 3: Laggan to Fort Augustus (17km)
We headed back through Laggan, and past the Great Glen Water Park, heading east onto the old Spean Bridge to Fort Augustus railway line which used to run along Loch Oich. The tracks are now all gone, but the level well compacted earth made for a pleasant change to the previous days thick mud.

Towards the end of Loch Oich we passed this derelict house, with the standard 'do not enter' sign. 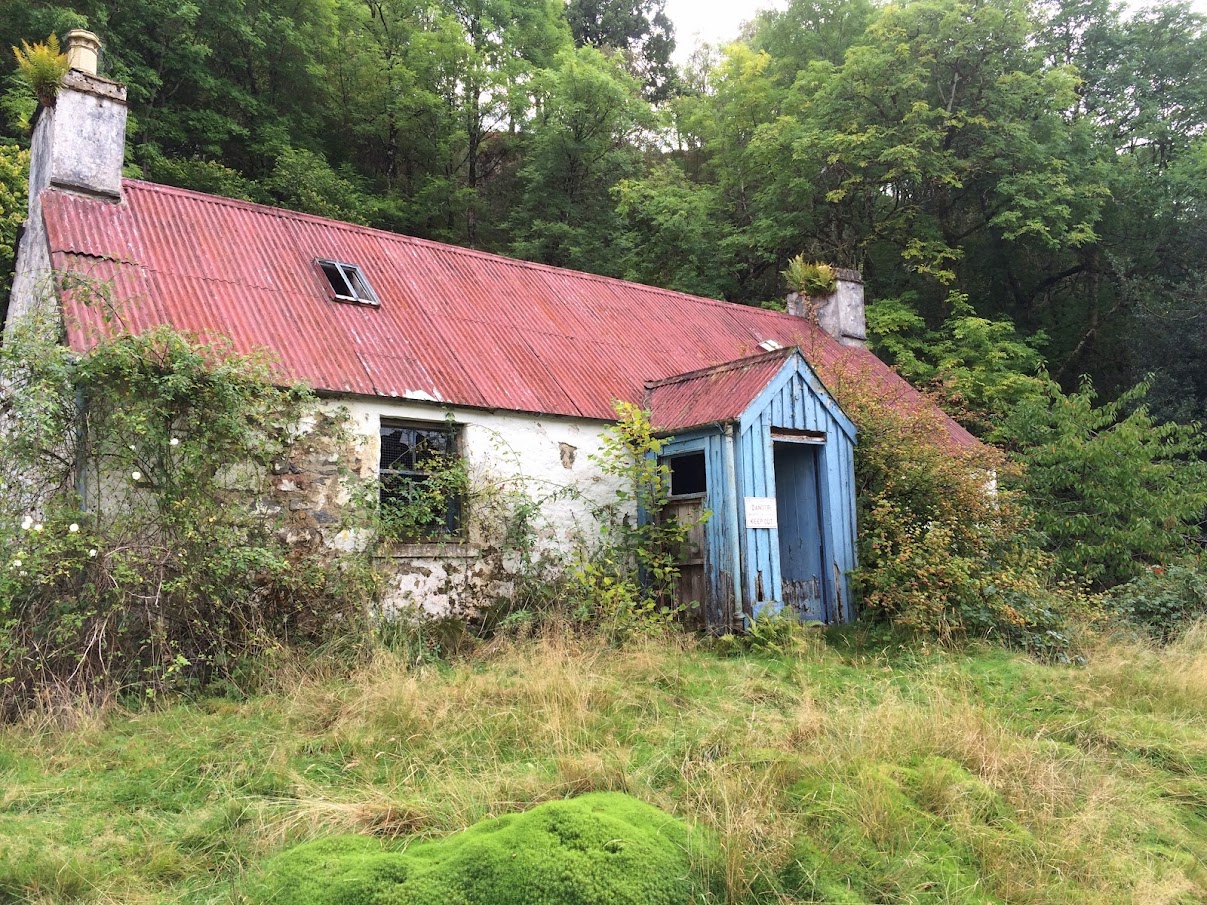 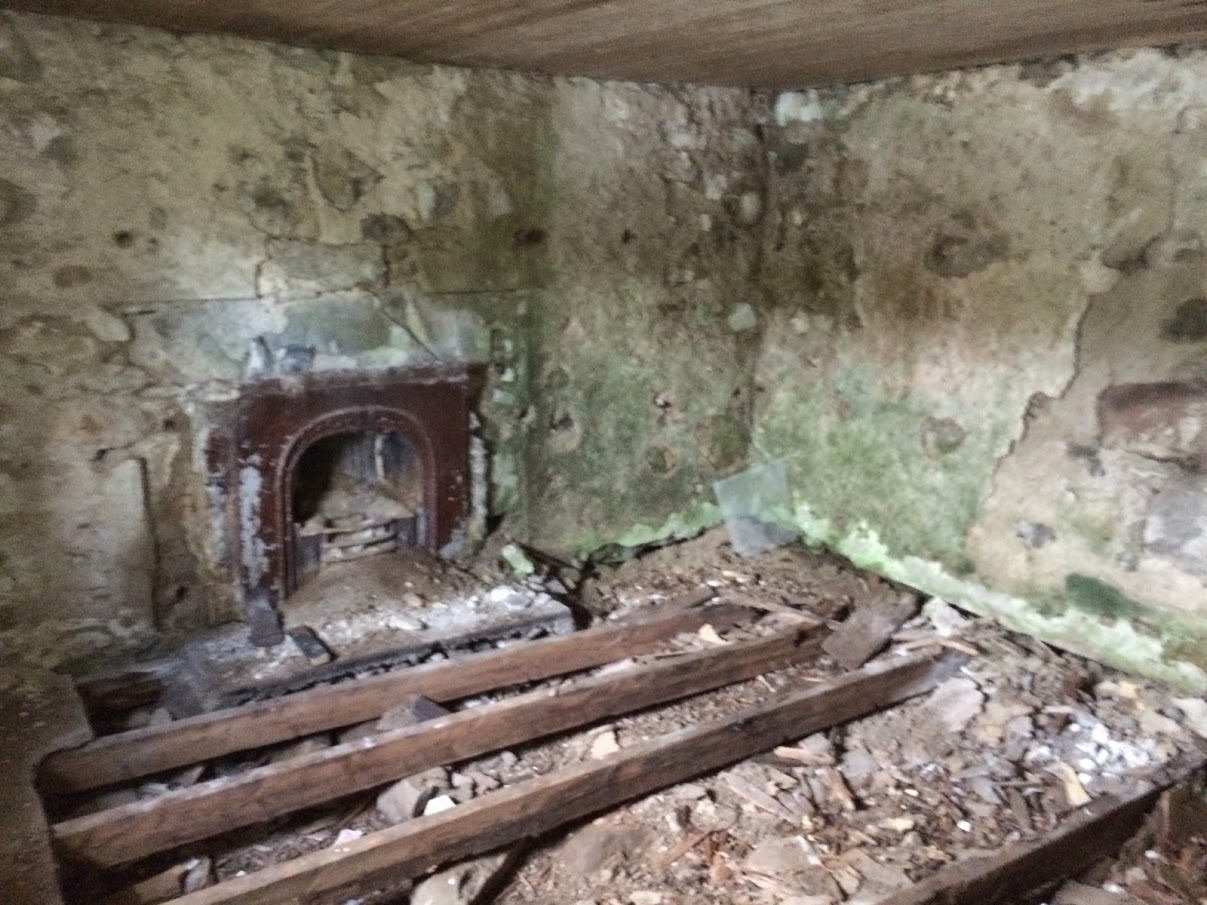 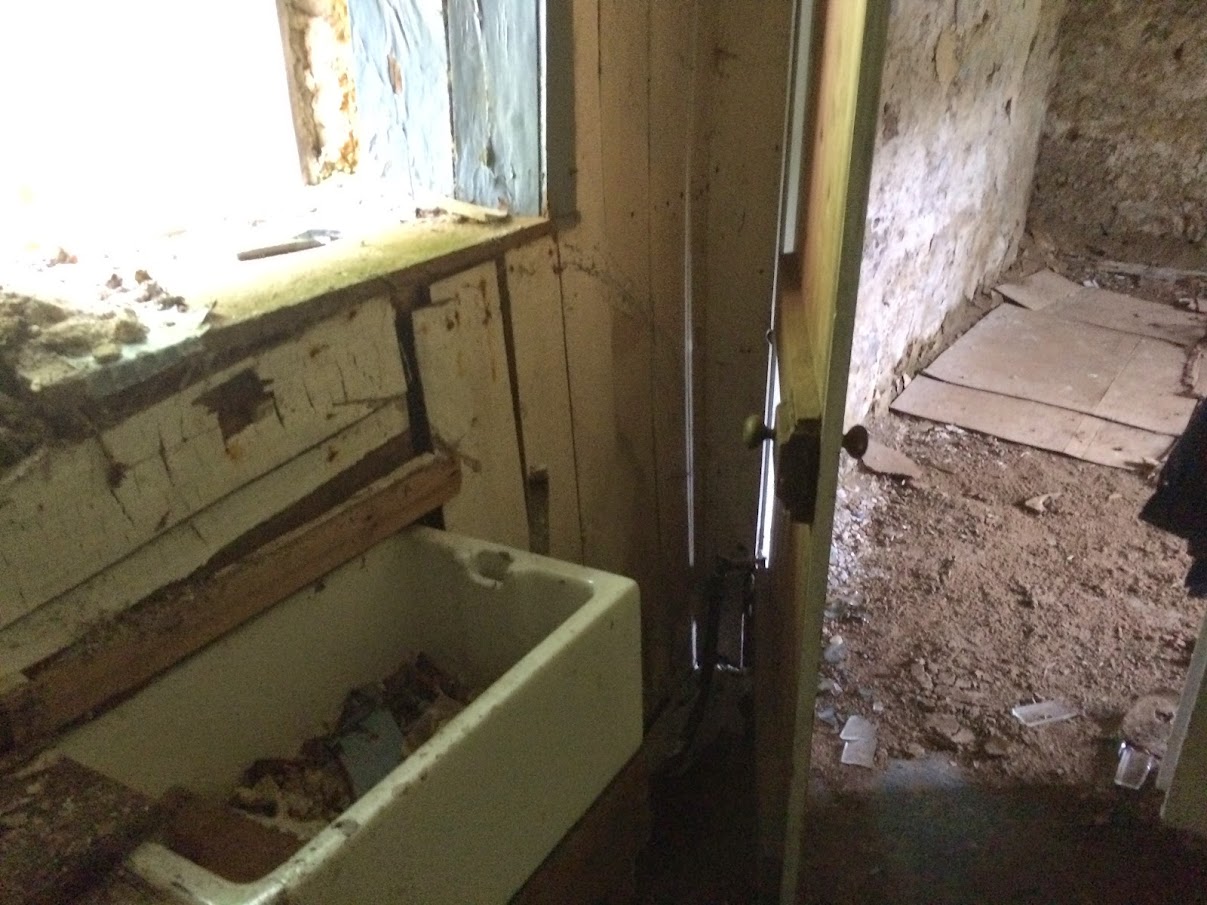 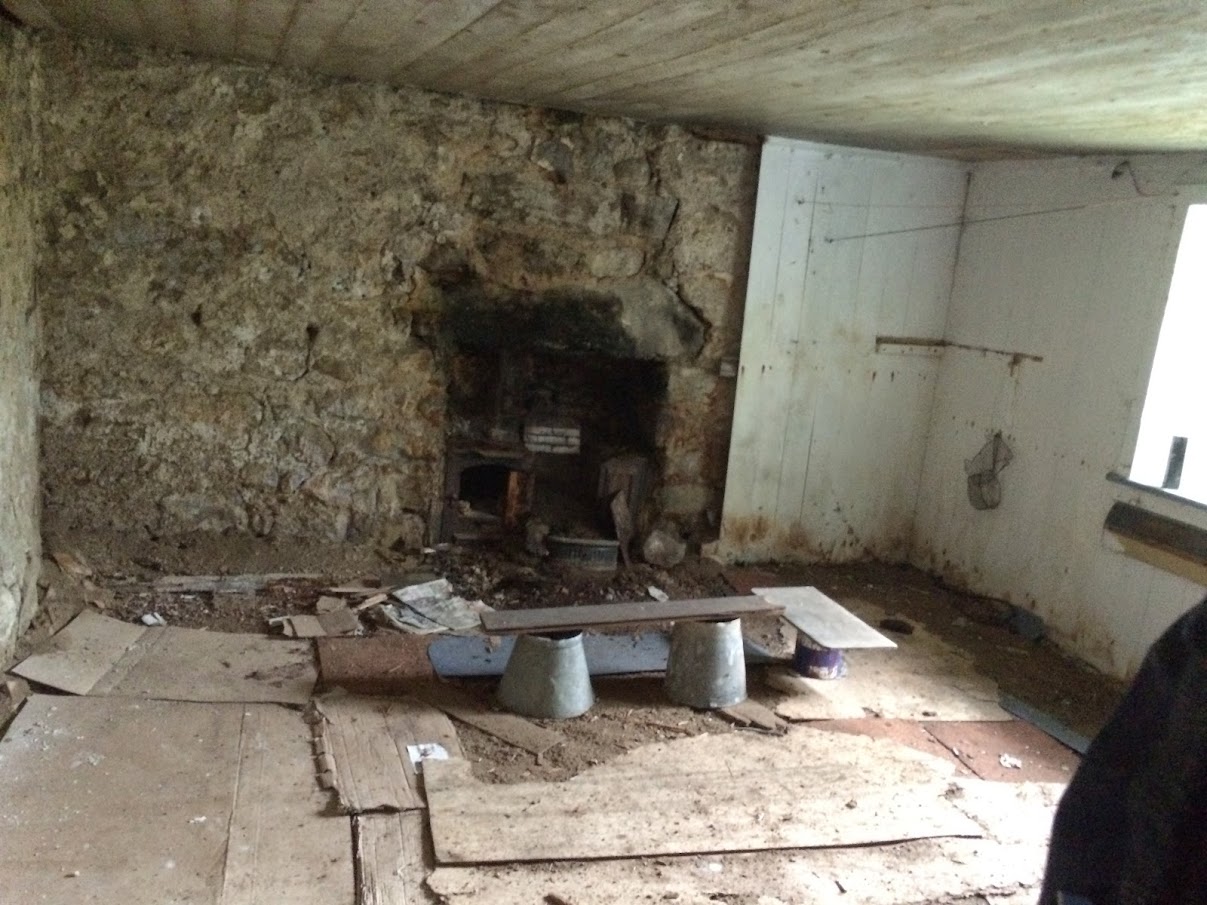 Continuing on to Aberchalder Farm, we stopped for lunch at the Oich Swing Bridge.

The day began to brighten up as we passed Cullochy Lock.

Arriving in fort Augustus we decided to treat ourselves to a pint!

We were very tired though... 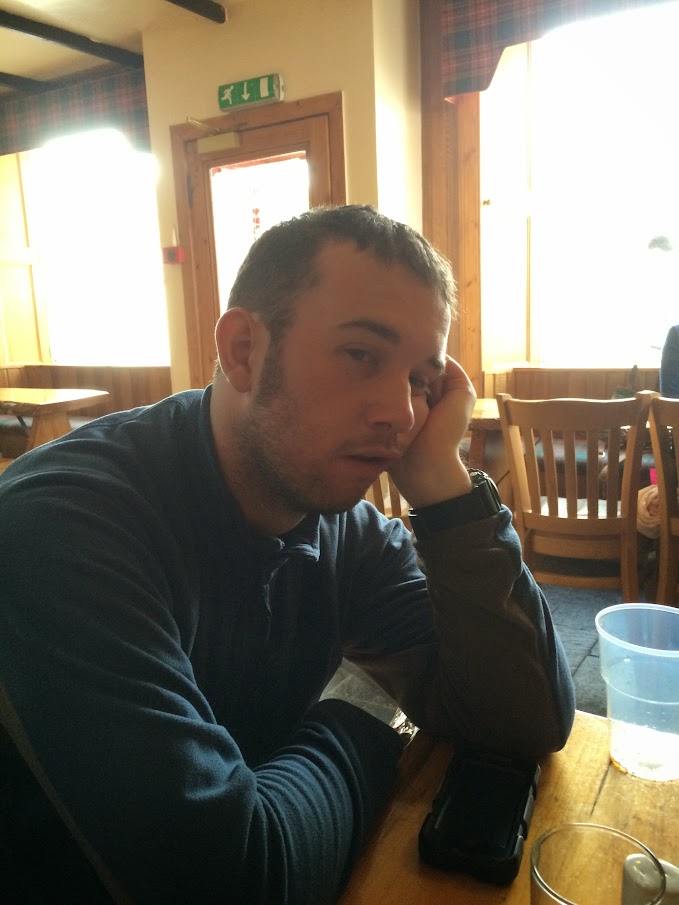 We decided, again, to stay in a local hostel as we had a 36km walk over to Drumnadrochit the next day.

Day 4: Fort Augustus to Drumnadrochit (36km)
The journey from Fort Augustus follows the main road through the town, before branching off.
We decided to take the low route along the banks of Loch Ness.

It was not a very interesting route, perhaps due to the large amount of forestry work going on.

We decided to stop for a pint at the Glenmorriston Arms for a pint, joined by a local.

I decided to splash out on a new hat from the local craft shop in Invermoriston, before we set off on the high road over to Drumnadrochit.

The high route was quite a disappointment. High forestry meant there was no views of the loch, and the area was scarred by access roads and awkwardly constructed paths. Not sure what the purpose of this construction is.

We stopped for some refreshment (you can see the bleak landscape in the background).

We reached the high moorlands around Meall Doire Bhrath, and eventually the forestry ended, so we would see.

We began the descent to join with the low route, and head along Loch Ness. As we did, a large cloud of mist closed in down over Loch Ness.

We eventually made it to Drumnadrochit, and upon hearing about a beer festival at the Benleva Hotel, decided to stay in the local hostel. We made it along to the beer festival, which turned out to feature some of the most 'interesting' accordion music I've ever heard.


Day 5: Drumnadrochit to Inverness (29km)
Heading off from Drumnadrochit, we followed the A82 around to rejoin Loch Ness at the RNLI Lifeboat Station, passing this war memorial on the way. 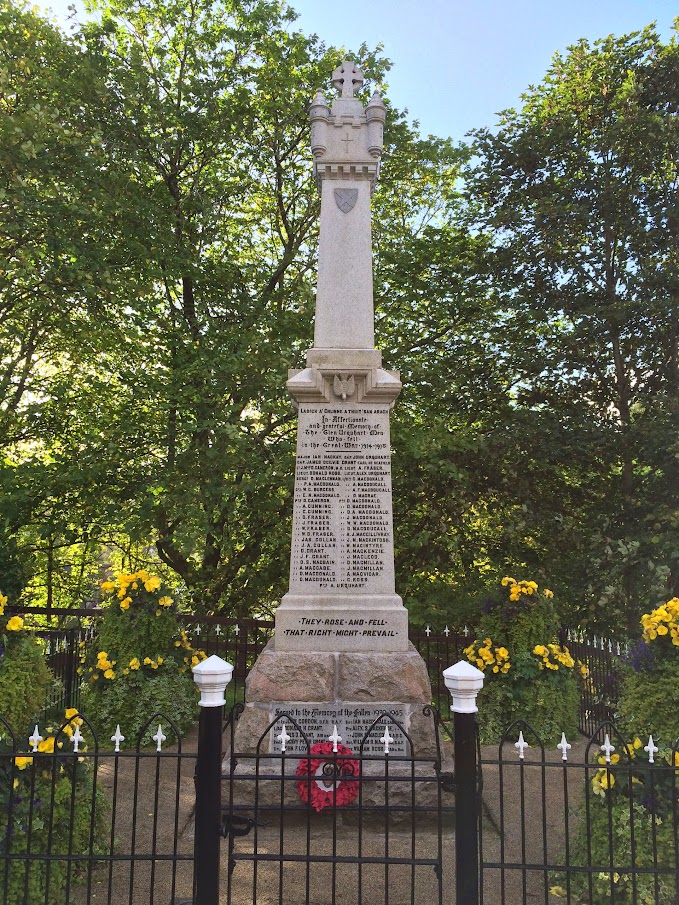 The path turns left off the road, heading for very steep climb to the top of the high route out over Loch Ness. 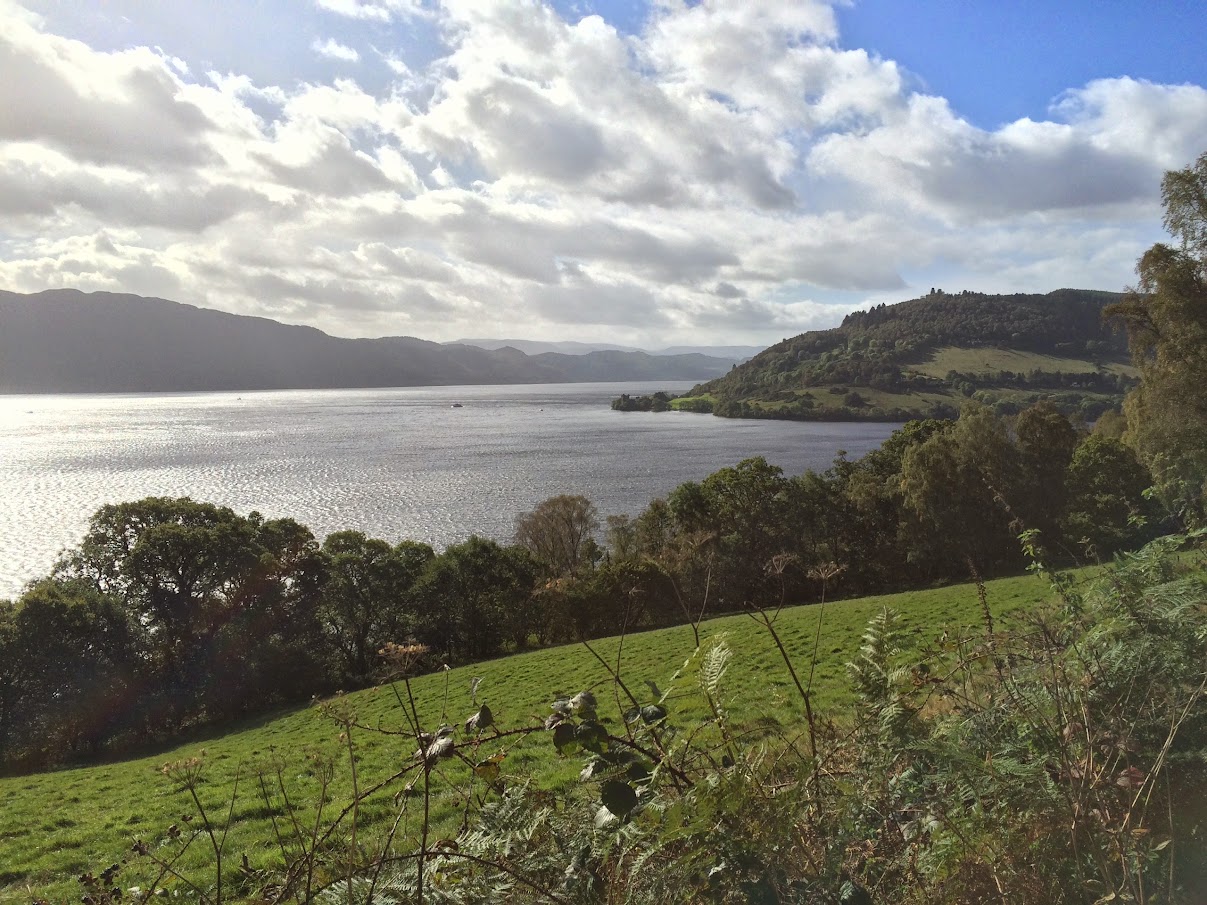 After the steep climb there is a gentle ramble through Abriachan forest.
Along the route, flanked on either side by tall thick vegetation, there began to appear random wooden signs with various food and beverages written on them, such as 'tea', 'beans on toast' and 'soup'.
Eventually we made it to a strange, haphazard cafe/hippie commune - complete with pigs and chickens roaming around.

It's a really interesting place, you should check out their Facebook page: https://www.facebook.com/pages/Abriachan-Eco-Campsite-Cafe/167842033237793?sk=photos_stream

The path from the cafe continued on, before reaching a clearing overlooking Inverness. This marked the start of the descent into the city. 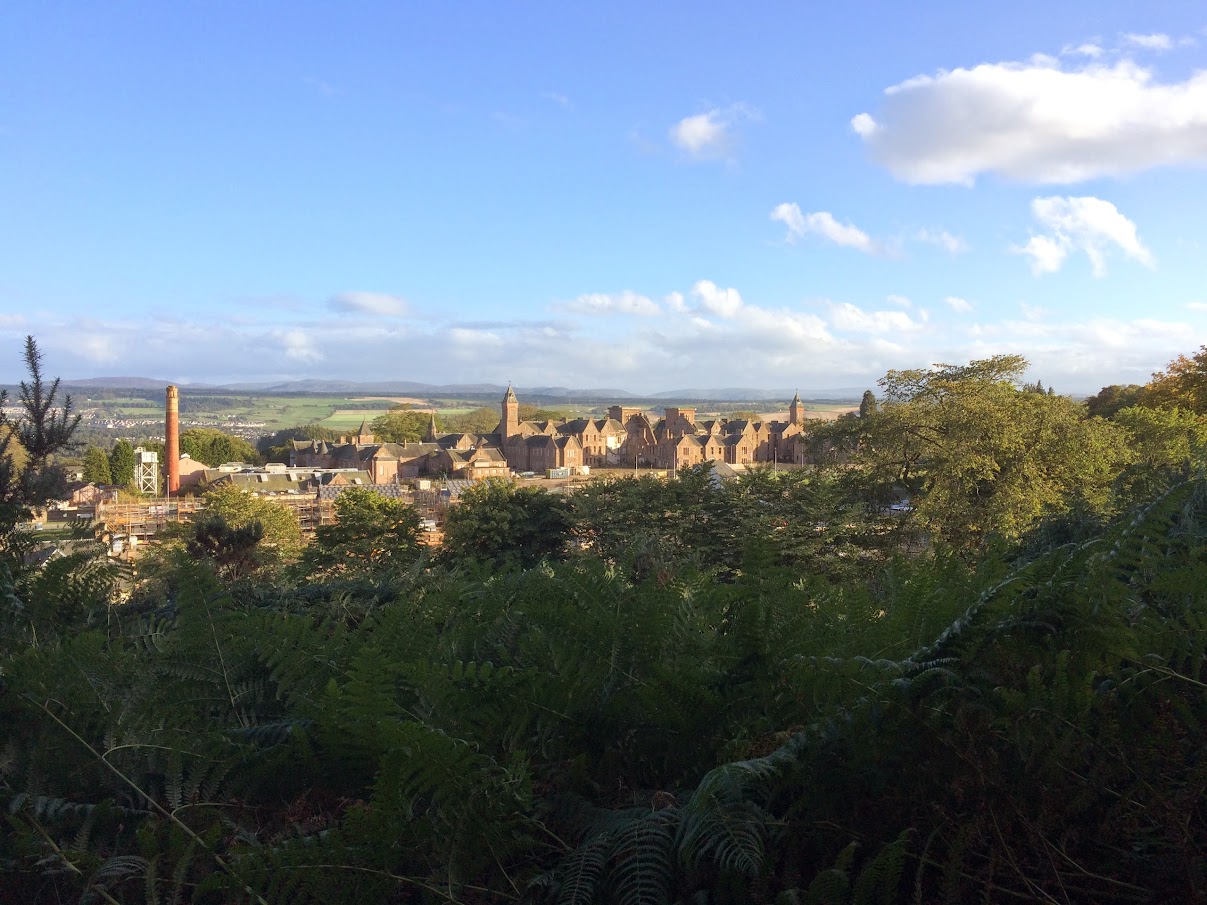 The route down though various residential and industrial sites is pretty boring. It was a shock to the system to emerge from a field into a garden between two rows of terraced houses, then to follow the path through a children's play park!
After much weaving and winding, the end was in sight.

It was a great experience, and a real test of resilience. However, if you're reading this contemplating doing the GGW - I wouldn't if you haven't done the West Highland Way yet. The WHW offers so much more in terms of scenery, terrain and interesting things along the way. There is a lot of work ongoing to improve the route, and I hope the organisers consider shifting the start point to Neptune's Staircase. Thanks for reading.

Good to read another report about the GGW.

I know what you mean about the start but I quite enjoyed it with the track following the river, the long bridge next to the railway line and then having a look at the old boat you have a photo of.

There are a lot of wooded sections (although going by your photos, maybe less than a year and a half ago when I did it) but when there were gaps, some of the views down Loch Ness were brilliant.

The café in Abriachan woods is a must stop, they were building a house when I was there - is it finished???

There are a lot of pictures that don't show btw

Gordie12 wrote:The café in Abriachan woods is a must stop, they were building a house when I was there - is it finished???

Yes it was a very nice place. Such a lovely couple living the 'Good Life'!

They had made (presumably) quite a lot of progress, they were now living in their house and had a local water source and other facilities set up.

Hi
did the GGW 6 years ago, because I needed an easier Option in really crap weather. I started originally in Glenfinnan, walked over to Inverie and out to Kinlochhourn, doing all the munros on the way. My plan to continue over the Saddle to Glen Shiel was soon drenched in horrible rain. So I decided to hitchhike to Ft. Willi. GGW was a good way, to do something not too exciting in foul weather - although it changed for the better the next day ...
The Café in the forest used to belong to Rory, who owned the whole land but could´nd afford building a house. He was a strange but really nice chap. I had a 3 mugs of tea and shortbread (beware of the chickens!) for 3 Pd.
He was living in an road waggon. Sorry to hear, that he must have sold the place.
The shock, Walking into the City after 4 days was a bit disturbing for me as well. Some "cool" Kids made their fun of my Walking equipement.
The Loch Lochy Munros might not be the most beautiful hills around, but you did it and made sure, you don´t have to waste a sunny day on them .