I had planned on doing a long walk from Glen Feshie to Cairn Toul and Angels Peak but from Kingussie I could see there was still a lot of snow on the backside of Braeriach and so made a last minute decision to head to Creag Meagaidh. A long walk itself but hopefully snow free.

Set off from Aberarder at 10am and soon worked up a heat. Really good walking temperature with a light cool breeze and warm when the sun was out. Made it to Lochan a' Choire after about 90mins along the fabulous path. I have read and seen that this path used to be a bit boggy but not now (not the day I did it anyway) - well made, well drained and easy to walk on. Anyway, what a stunning place with terrifying cliffs and the silent lochan! There was a short and light shower here while I took my first break. 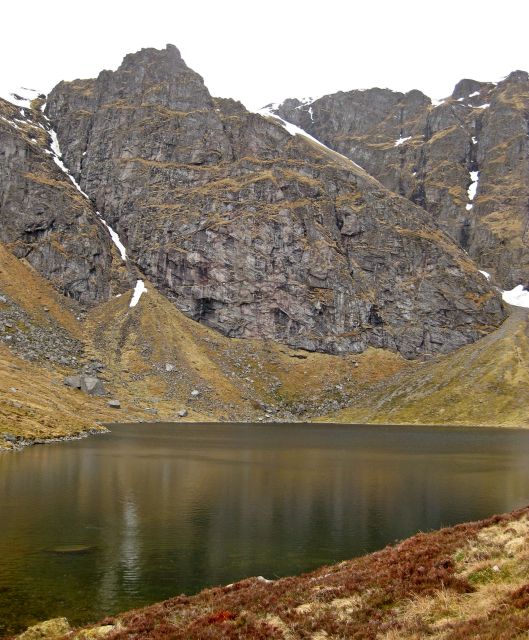 apologies for the blown out sky - not great photographic conditions

. After the brutal winter there has been there was much loose rock and routefinding took a little care to avoid sending any unwelcome deliveries to walkers below me. A little stupidly I ascended a bit early out The Window on some very steep ground and scree instead of continuing to the easier proper path. However, very soon I was on the summit plateau and passed Mad Meg's on the way to the summit cairn. I was trying to avoid the soft snow patches to keep my trail shoes dry-ish - only partially successfully. The views W and N were amazing and I could pick out Ben Wyvis and Sgurr na Ciche (everything in between was a bit vague). Fortunately, the sun was out and in the lee of the summit I was able to have a boots and socks off lunch break with great views to Grey Corries, Loch Treig, Scheihallion, Cairngorms etc etc etc (I have rode my luck with the weather this year...). Back to The Window and just 5 minutes walking brought me to the unassuming summit of Stob Coire Poite Ardair. I said hello and had wee chat to a group from Aberdeen who were having break overlooking Coire Ardair. From here it was just a case of one foot in front of the other on the 5km walk to Carn Liath. There is not much of interest on this section but the views were more than enough to keep me occupied. It had clouded over a little to the W but the view S and E were still impressive. I reached the summit of CL at 3:45pm, about 2h30mins from CM.

It was now time for my least favourite part of any walk - the descent. Maybe it's my short legs but I descend really slowly and, I must admit, rather unelegantly. After my usual slipping, stumbling and cursing, I picked up a little used path following a line of fence posts which made the going easier and, eventually, brought me down to the outward path. I must haVE got some bizarre 2nd wind after emptying my shoes of heather, as I jogged the last 1km back to the car

Did I say this was a great day? The approach to Coire Ardair and the amazing views will stay with me for a long time

Nice! We were up Stob Ban and the Grey Corries Sunday and I could see out your way as well. I'm hoping to do these three this weekend if the weather plays nice again. Coire Ardair looks like a fine play to try some more HDR images

Nice one Leithy - the path into Core Ardair is excellent isn't it? I think this hill is really something with its Winter claes on - would recommend if you go back up again.

Great photos and well written, Meagaidh was my first munro going back in august to do it again so great to read about it thanks for sharing.

The summit of Creag Meagaidh is huge you could play a game of football up there, amazing how much snow there still is.

Nice report and some great pictures, which I will find useful when I venture on to these hills. This is a walk that has been on my 'to-do' list for too long now. I actually had this planned for today ........ until my alternator decided to duff my car on route early doors

So it was another weekend without a walk for me

I hope I get similar weather to you, but with Scottish summer time being what it is ....... I'm not holding my breath

The-Big-Grey-Man wrote:The summit of Creag Meagaidh is huge you could play a game of football up there, amazing how much snow there still is.

Now there's an idea??? anyone for a high altittude WH's 5's tourney...rucksacks as goals!!!

Surprised how much snow is retained up there. Still got to keep it in mind. Saving this for the summer months.

brpro26 wrote:
Surprised how much snow is retained up there. Still got to keep it in mind. Saving this for the summer months.

Cheers, but I did it a year ago

I fooled myself into thinking it was 2010 until your comment Leithy!

Nice report anyway, it's a fine circuit. I did it in reverse and ripped my waterproof trousers slipping while descending from the window.
Coire Ardair and the path through the glen is fantastic.
Like kev says, it would be a great winter hill (his report on it is great), and i'll probably return then. Being one of Scotlands most popular climbing venues I'd also like to watch the ice climbers do their stuff there.