Reborn on the Arrochar Alps

Reborn on the Arrochar Alps


The weather forecast the night before had informed that today would bring us blue skies with a couple of showers here and there. Instead we found ourselves huddled at the base of The Cobbler’s amphitheatre, pinned down by the wind in the midst of a raging snowstorm, visibility down to a couple of feet. This was not the gratifying day out in the Southern Highlands we were hoping for, and, to make things so much worse than they could have been, the dog had gone AWOL. We drew into the car park at nearly 9.30am and it took us only a short time before we were ready to go. It was then it dawned on me exactly what a mismatch of gear I’d chosen to take. A pair of old hiking boots, waterproof? Maybe. A sailing jacket that I knew was waterproof, waterproof trousers and gaiters that I borrowed from my flat-mate and plenty of warm layers. Stepping into the car park and strolling across to the loch side, the views down Loch Long were very palatable. The hills encased this gangly loch all around except to the South, where it joined into Firth of Clyde out of sight. After a few pictures we made our way up the steep zig-zags which climbed through the dense forest. The weather was typically Scottish, especially for this time of year. The sky was covered in heavy clouds, there was a dampness in the air as spits of rain seemed to fly directly into your eyes. Whisps of mist still hanging to the hills and glens. A chill that sucked itself in to your bare-faced skin. A cauld morning. Dreich and cauld, October.

I’m not a fan of walking through forests, especially when it’s going uphill: I prefer a view. Chris, my good friend and guide for the day had assured me that once we passed the forest section my outlook for the day would change. So with determination we plundered on, left then right, right then left till we eventually cleared the forest. It was a steep trek to get this far and I could feel my knees burning a little. This was the first proper bit of walking I had done for years but I was happy I wasn’t out of breath. Chris’ auld dog foraging through the heather picking up on all kinds of strange scents. The effort is worthwhile as the views of Loch Long and the surrounding hills improve greatly, Ben Lomond peaking over the top of the hills to the East. You pass a small dam as the glen starts to show itself before you. In the distance there was something else. Hiding in the thick cloud, its three peaks only just visible, peering out at you. With every stride you take towards it, the vast beauty and scale of this Corbett is before you. Like a witches cauldron that had been smashed vertically in half, its three peaks leered over its corrie. This hill seemed to have its own personality, but one that it would not reveal until we were standing under its towers. 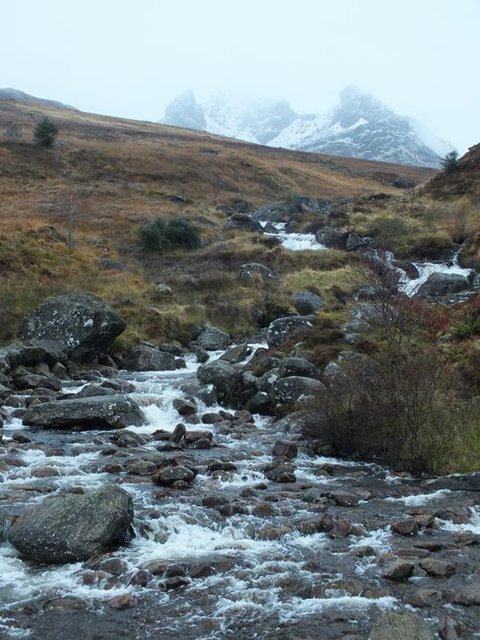 Making our way towards the hill we decided to have a pit-stop at the Narnain boulders. Massive rocks the size of houses, which is quite apt since in the past they were used as sleeping shelters or howffs by those who couldn’t afford to pay for local accommodation but wanted to hone their climbing skill on the Cobbler’s many rock-faces. Time to take on some sugar and liquid. Throwing the left-overs to the eagerly awaiting dog. We made our way en-route to the base of the hill. As we approached the first climb up onto the Cobbler, the weather started to take a drastic turn for the worse. We made our way up through a stream coming down the N.Eastern peak and into the corrie. Approaching from east to west we made the scramble up the rocks hauling the dog onto ones that it couldn’t climb. By now the snow and wind were rushing past at a ferocious rate. Having to stoop low and hold on to the icy rocks for balance. Just as we made it to the base of the final climb below the cliffs of the northern peak, a herd of deer ran down and into the glen, as the dog bolted after them. The winds blew harder and the sky grew ever darker, there was no point chasing the dog back down. But we were now in the witches cauldron and the mood was growing ever greyer. We couldn’t move at all, so decided to wait for the dog to return, surely he would. About twenty minutes of shivering later, he appeared, obviously a little out of breath and a look of shame across his face. He seemed to have realised that wild deer are much younger and fitter than he was… either that or the mixture of relief and anger showing on our faces made him realise he just might be in for a telling off.. It was now we had to make the break for it, should we head back down or should we tackle the hill and see how far we could get. Upwards we climbed, taking each step carefully, painstakingly picking our way up the face. Even with gloves on this hill felt cauld, it felt moody, an undercurrent of not wanting us to be there. But persevered we did till we got to the rim and onto the col. The full scale of the storm was apparent, winds flew past savagely digging the cold into my face. Snow was biting and yes, this was a whiteout. The path to the northern peak was nowhere to be seen, covered in a mix of snow and ice. As we hunkered down to a crawl we struggled to gain ground. One step then another, slowly, mercifully we pulled ourselves onto the Northern peak. Exhausted we tried to gain composure for a couple of pictures. This wasn’t the glorifying finish to the day I was expecting, this was close to the edge of danger and these edges had massive vertical drops. We waited for five minutes till a break in the wind would release us so we could escape the horror that was this storm. It was then that whatever gods that control the mountains decided to unveil their gift. Almost within a moment or two, the wind stopped, the snow departed from the air and the clouds all but disappeared. Bewildered, each mountain before us revealed itself in its snow-capped glory. Blue skies and vistas as far as the seas. Golden brown glens, distant mountain ranges, all suddenly glowing under the pale blue sky. For as long as I could remember, this was the first time I was truly overwhelmed and breathless by the sheer scale and beauty of Scotland. Elated we stood staring at the landscape portrait hanging in front, but this was real.

This was the award for the effort. This truly was Scotland in its finest attire. Aye! The Cobbler it's a classic.

Looks like you got it really hard that day lol.
Don't want to make you jealous but if have a gander at my reports you'll see I got it a bit different with BBQ n beers and sunshine lol.
But well done on that effort

I dont think I've been up the Cobbler on a decent day yet!
Last time I went up Ime I was tempted to come back over The Cobbler as the sun was shining... then the cloud came in!

The Cobbler still remains one of my favourite days out on the hills even though I have only been up there once. Would love to see it in the snow.