warning: This report has still to be edited and is not complete yet. 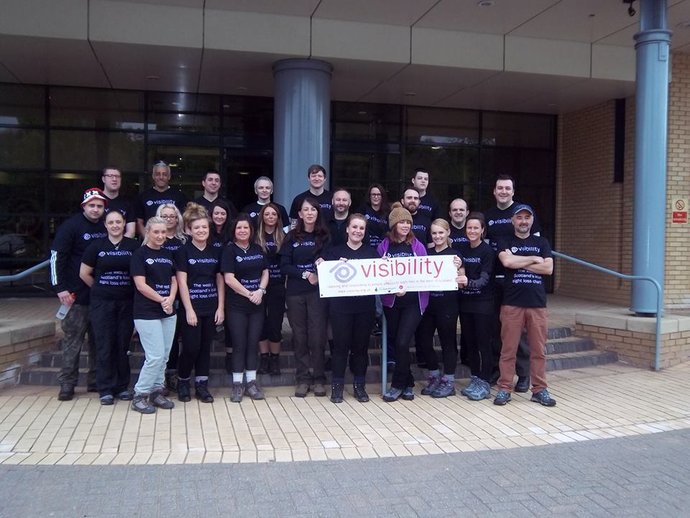 The forecast was for clear weather up until 4pm then cloud and rain later on in the afternoon.

So the plan was to get up to the summit as quickly as possible and back down hopefully avoiding the worst of the rain.

Everyone was in good spirits as we headed up toward Fort William via Loch Lomond, Bridge of Orchy, over Rannoch Moor and down through Glencoe. The sun was shining and the views were amazing as we travelled up the A82.

We stopped at Tyndrum for a stretch of the legs and some snacks for the journey ahead took'selfies' then jumped back on the bus for the final leg to Glen Nevis.

The weather was still looking good as we piled out the bus grabbed our kit and set off up the hill.


The trail was busy and we soon all split up into little groups all going at a pace that we were comfortable with as often happens on these occasions.

We stopped at Halfway Loch for a group selfie and some snacks and to enjoy the views.

A bunch of guys passed us at that point carrying what looked like a large wooden bed or something of that description?

Little did we know what their actual intentions were and we gave them a cheery wave as we passed them by on the way up.

Picked up the paper the next morning and read about what they had actually done with the wooden bench at the summit and laughed.

Turns out they had concreted the bench into the top of Ben Nevis and had to go back up the next weekend and bring it and all the rubbish they had left back down after some local chap from Kinlochleven had chopped it up into pieces in disgust. Anyway next stop was the mighty Redburn which was in full flow from all the ice melt coming off the hill. I had been up to the summit on Easter Sunday, 2 months earlier and this section of the path had almost been impassable and blocked with avalanche snow which had now completely cleared which made it a bit easier for some of the group who were doing it for the first time. High altitude brings the best out in people ....peace out! There was plenty of time for scenic selfies as we all slogged our way to the top of UK's ultimate summit. At this stage we were all past the 'half way' mark and a lot of the group had never been higher than the top deck of a double decker bus. So reaching this point was a major achievement for a lot of them who also hadn't done much in the way of training for such a huge hike.

But everyone who had volunteered for the charity hike really gave it their best shot and showed 'true grit' as they pushed themselves up that big hill. 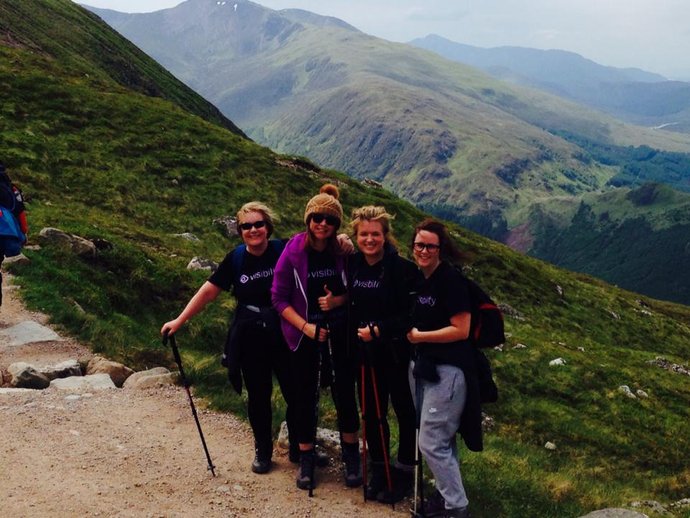 We did however hit some snow on the final approach to the summit which added a bit of fun to the day as we all slithered our way up to the top. Happy days and lots of smiley faces as we all sat about trying to take in the amazing views from what is officially THE highest point in the UK. We had plenty of time for lots of 'selfies' having finally reached the summit. For some in the group it was their very first munro

and first time on Ben Nevis. So hats and beanies off to them for an amazing achievement in busting that 'duck'.

There were others who had done the 'Big Ben' two or three times before but who always enjoy the physical effort as opposed to the challenge of doing a 4000ft hike and trying to beat their previous times to the top. Then there are others ...well just one actually who just take it to another level by carrying everything including the kitchen sink up and have a BBQ at the top of each mountain they 'bag' Lets get this party started.... as we set about getting the Bubba Qs fired up for the ultimate 4 k Steakfest To be fair Alan did humph a pot of chicken casserole up the 'hill' ...which I have to say was excellent and went well with the Ribeyes and beer.:-0

Tasty food, good beer, great company, brilliant banter and fantastic scenery at the highest point in the British Isles ....What a day this was turning out to be! We managed to rustle up some hot, sizzling steaks on the Bubba-Qs in amongst the ruins of what used to be the Observatory which offered us some shelter from the wind that was beginning to pick up.

As the forecast had predicted we could see dark, clouds slowly drifting across the Mamores and heading straight for us.

So we quickly packed up the remains of the BBQ and headed off back down the track with the rain sweeping over us. The official highest point of the UK is not the actually trig point, but the wooden roof of the rescue hut at the summit!

Bubba grabs a quick selfie then joins the rest of the crew larging it back down the hill as quickly as possible trying to avoid the rapidly changing conditions from bright sunshine to wind and rain. We snatched some snow selfies on the way back down the mountain. The scenery was amazing from the top of the UKs highest mountain and a clear day like we had you could literally see for miles around. There was some fun to be had and loads of giggles as we bum sledged our way of the snowy summit before hitting the rocky trail again. The rain did however produce a few casualties on the way down as just about everybody had a minor tumble at one point on the slippy rock which had been bone dry on the way up. The casualty count was quite high ...with one broken thumb, two cracked ribs and various other sprains and bruises.

But after stopping at the McDonalds in Fort William the pain and the rain were soon forgotten and replaced with elation at what they had just achieved.

Kobi won the prize for the best 'beanie' of the day! Although Katrina, Alan and Gibbys were pretty special too Although Katrina, Alan and Gibbys were pretty special too