Stob Ban and the Grey Corries

Stob Ban and the Grey Corries


After a fine day in Glen Shiel on Saturday, Sunday David and I set our sights on the Grey Corries and Stob Ban. We parked up the track from the Coire Choille Farm and set off around 9:30, heading south along the good track which takes you up to the bothy below Stob Ban. Along this bit I was freaked out by a statue of a very angry looking Puritan and had it been a bit darker and had I been alone I probably would have turned tail and ran

It's easy going all the way to the bothy and after a quick peak inside we crossed the stream and took the path off to the right that heads up Stob Ban. It's a bit boggy at first but then things improve and the going up Stob Ban was pretty easy. From here the 360 degree views were impressive, especially over to the lump of Sgurr Innse and across to the Mamores. Moving on we descended the scree and rocks down the northwest side of Stob Ban to reach the bealach below Stob Choire Claurigh. After the previous day's walk this was a bit tiresome and we took plenty of short breaks until we reached the summit. I was immediately impressed by the sheer scale of the Grey Corries ridge from start to finish. With the weather much better than Saturday I knew this was going to be an amazing ridge walk. There are really no difficulties at any point between the first munro and the top Stob Coire Easain near the end of the ridge. There were still some cornices to be cautious of, but there was plenty of room to move about. We had decided to see how we felt after reaching the second munro, Stob Coire an Laoigh, before deciding whether to include Sgurr Choinnich Mhor, the last munro along the ridge. We reached the top of Stob Coire Easain around 4pm and not wanting to come all the way back for the last peak I decided to give it a go while David headed back to the car. Here is where I messed up. The descent off the top was initially ok, but about halfway down things got more complicated. I reached a gully that looked to be the only way down, and it was steep and loose. At this point I tweaked my knee and as I sat in pain looking over to Sgurr Choinnich Mhor I decided that I had had enough and I climbed back up to the top to collect my pack and head off the ridge. Leaving the munro for another day was probably a good idea as my knee gave me fits all the way back to the car and to be honest I didn't fancy re-ascending that gully. The walk out is fine for about half of the way, but once the dam is reached you have to cross the stream and then follow the wet and muddy old railway path back to the parking area. I was relieved to see the car and more relieved to find the small grocery store in Spean Bridge still open. Rasberry Lucozade, yum.

Just want to thank David for a heck of a weekend along two spectacular ridges, looking forward to your next trip north. You really meet some nice folks on the hills. 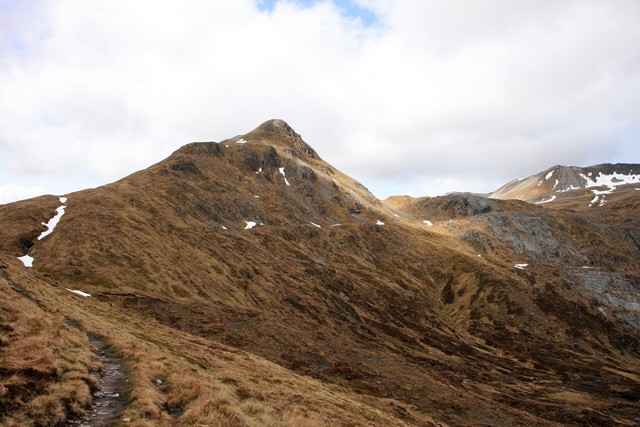 Couldn't resist the HDR in the end I see

. Would have thought the Puritan would be a familiar sight coming from Tennessee

Hi Stretch,
Nice report again. That looks like a tough walk so not surprised you were longing for your raspberry lucozade

Nice self portrait on picture two

Stretch wrote:Along this bit I was freaked out by a statue of a very angry looking Puritan Ah - I was wondering what Gordon Brown was doing now

I kid you not, it took me a few minutes to work out that this was a statue from a distance, it was very strange and spooky. Of course, there is a slight resemblance to Gordon Brown lol.

Great report and some nice pics aswell. I'm off to do this ridge next week