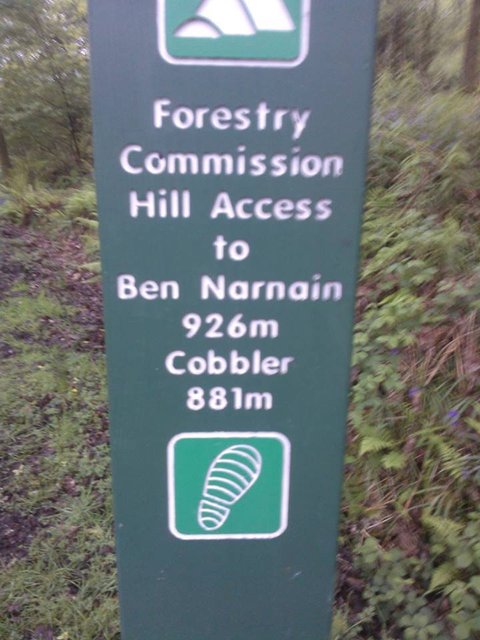 It was a bright sunny morning as the latest recruit Nikval arrived at the gates of Boot Camp along with Tough Mudder Bo and camera man Sam. 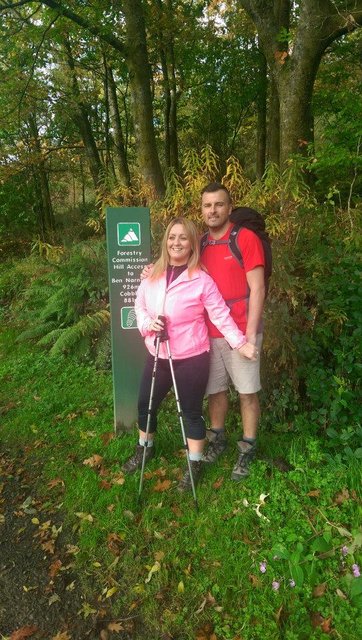 Bo and Sam had passed their Boot Camp Induction a few weeks before and now Nikval had come along to give it a go. 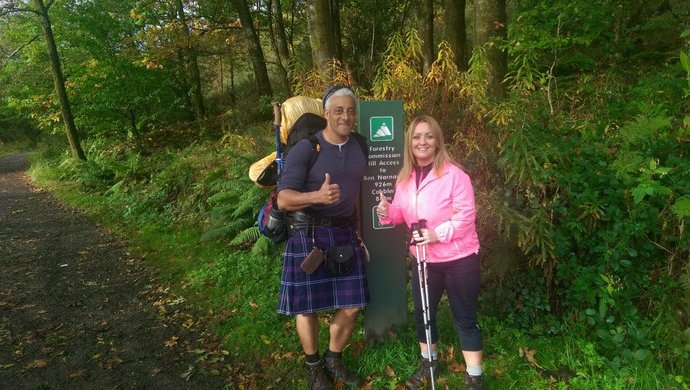 They had the compulsory snaps taken for the Boot Camp Hall of Fame album. Then we set of up the zigzag trail to Bubbas Creek about a 40 min yomp through the tree line to a weir.at the start of the Butter Burn Trail Bubba goes for his usual dip in Bubbas Creek to cool down after yomping the cargo of steaks and booze up the hill. Nikval and Bo vow to bring their 'bathing costumes' next time and we all set off up Butter Burn Trail towards the Narnain Boulders. Bo and Bubba conquer the 'Big One' on their second attempt and stand loud and proud looking down the glen and up to the Cobbler from this hard fought vantage point.

We discovered it was nice and flat on top with plenty of space to hold a Bubba -Q and even a bivvy or two ...so watch this space folks

You know it's going to happen one day soon. The giant leap...it's got to be the quickest way down. Anyway after much 'tom foolery' and just enjoying a great day out we carried on up to the main objective by crossing over the Allt a Bhalachain and straight up the scramble path to the col and then onto The Needle.

I was absolutely amazed and gob-smacked at how quickly she went for it ....she not one to be outdone by the boys and usually spends her spare time jumping out of planes and the like.

Well Done ..Nikval and straight into the Hall of Fame along with Bo, Danny, Dom, and Colin. Got the selfie to prove that she had Threaded the Needle and scrambled back down for a well -earned steak served up by Bubba himself to the new Boot Camp recruit. By the look on Bo's face ...he wasn't too impressed We tidied up the kit and headed of back down the hill ...mission completed! We had plenty of time for 'selfies' all the way back down the mountain for the Boot Camp album. Sam looks as if he's been 'Tangoed' by Bubbas spare jacket. As a reward to the new recruits completing induction we arranged a double rainbow spectacle all the way back down the trail. Just as we got back to the weir ...we heard someone shouting Bubba, Bubba ? Looked round and it was Dom and John two randoms I had met at more or less the same spot about a month back.

It was great to see them

again at Boot Camp and they instantly joined us for some more group selfies and banter all the way back down the mountain. Kindred Spirits always unite on such occasions and we had a great laugh swapping stories of the day. Re: Bubba and Bo do the Narnain Boulders

You must really like this hill Bubba, your up there all the time lol

Re: The Pink Lady does Ben Arthur

Aye Sonic ...have you noticed lol

There's no doubt The Cobbler is an iconic hill for a number of reasons.
It's easy to get to, it's easy to climb, it has something to offer all grades of hillwalking from the rambler to the freestyle rock climber, it's doable all seasons, it's got a very distinctive shape....it's just a great wee hill for 1st timers to try out and test their hillwalking skills.

I've introduced a lot of friends and work mates to the area over the past year or so and I always use Ben Arthur as a 'tester' to see how they enjoy the 'outdoor experience' and all of them have had a great time and gone onto to do other hills.

I use it to keep 'hillfit' and just test out my gear and pack before moving on to other areas ..confident in the knowledge that I can carry the load that I need to cover most eventualities.

It's the Boot Camp Induction trail for all new recruits and if they come of smiling ..which most of them do..then they are ready to tackle most of the other hills in the area.

If they Thread the Needle without being prompted then that is the 'ultimate test' which indicates where they are in terms of confidence and ability.

So yeah ..I guess I am up there quite a lot.

Pop over if you see the smoke signals and introduce yerself ...I'm usually the one wearing the tartan unless it's at the dry -cleaners lol.

Re: The Pink Lady does Ben Arthur

Bit of a random question Bubba, but we've been contacted by someone who found a camera who is trying to relocate the owner. You've been (possibly) identified as someone in a picture from said camera. If it's not to much of a pain check out the Scottish Mountaineering Club Guidebooks page. I'd post a link but unfortunately the forum won't let me!