Munros included on this walk: A' Mhaighdean, Ruadh Stac Mor


22nd. July, 1975:
The seventh day of my first trip to Scotland on a school trek from Killilan (inland from Loch Alsh) to Ullapool as a fifteen year old. We'd walked in to Carnmore from Kinlochewe on the previous day along the north side of Loch Maree, crossing the hills from Letterewe and the causeway between Dubh and Fionn Lochs to camp outside a cow byre with, apparently, permission from the Whitbread Estate. Today we were to go prospecting for two hills to the east which, although not shown as such by the generalised contours on our one inch maps, were rumoured to be over 3,000 feet high... 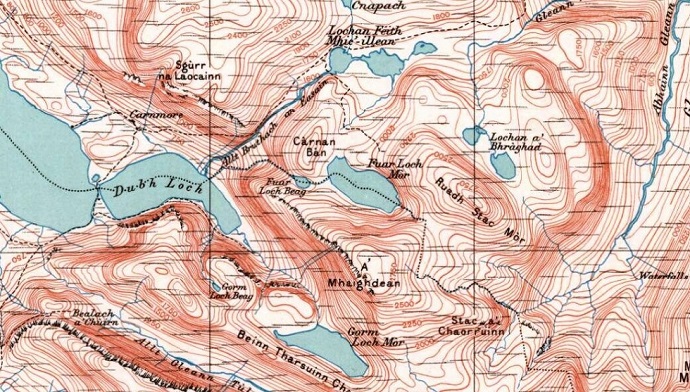 A copy of this part of the one inch map sheet showing both A' Mhaighdean and Ruadh Stac Mor well below the 3,000 foot contour!

It did, though, turn out to be a relatively easy day because, despite the inaccuracies of the maps of the time, the hills were shown in about the right place and all we had to do was walk uphill in approximately the right direction to get to the top.

our_route.gpx Open full screen  NB: Walkhighlands is not responsible for the accuracy of gpx files in users posts
By this stage of the trip, my camera had succumbed to the rain so I have no photos to remind me of where we went but a few bits and pieces stick in the mind. First was our surprise on encountering a deep gash and rocky pinnacles on the east-north-east ridge of A' Mhaighdean, a feature entirely absent from the map! Second - after only about five of us had gone on from A' Mhaighdean to Ruadh Stac Mor - was our descent down the west ridge of the latter hill relatively late in the day; the sun was low in the north western sky and our shadows were huge as they were thrown across the red screes of the hillside below us. Third was a really heavy steel crowbar that I discovered on the path alongside the Allt Bruthach an Easain as we descended and which I elected (in the cause of de-littering the Highlands) to carry all the way back to Carnmore - a poor decision. It had, though, been a memorable day out and we were heading north for a place called Shenavall on the following morning...
Next report: https://www.walkhighlands.co.uk/Forum/viewtopic.php?f=9&t=48367