The plan was Ben Vorlich (Loch Lomond), Chris & Andy were driving down the night before & camping, Brave Lads

, I was driving up early to meet them and hopefully get an early start. We had bounded the idea around of trying to ascend a double on the day however the weather forecast was pretty unstable and we were unsure as to what we would encounter with regards to the elements so we decided the safer option would be one we had all yet to conquer. We had boots on the ground for 08:30 as planned leaving the car park at a steady pace. It wasn't to long before we had reached the sub station that allows the views of all that lay ahead Chris & Andy Ready To Get The Show On The Road 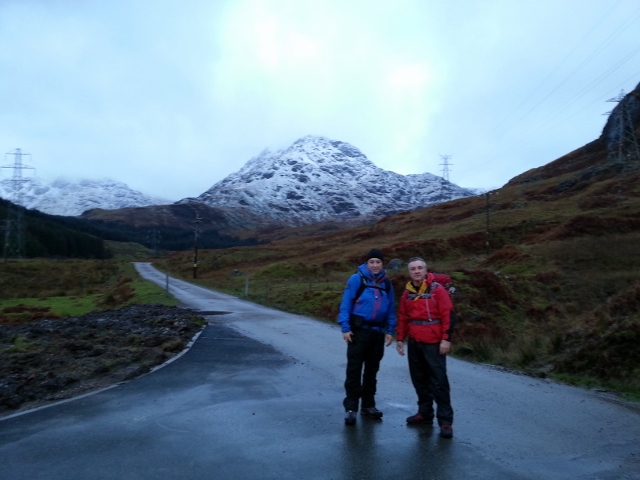 The walk was at a good pace as we chatted on the way up the initial track towards the Goal, it wasn't to long before we reached the small cairn at the side of the road that signalled it was time to put the legs & lungs to good use, the lower part of the ascent was quite boggy due to the lower level snow which had been melting as the climate continuously changed, looking up though we could see exactly where our boots would be hitting the stuff we were craving "SNOW" before to long we had reached the levels that required some additional winter coverage, the hail began to lash in stinging the face and hands whilst the wind did it's best to numb the fingers. It was at about this point of the ascent I heard what I thought was somebody's voice in the wind, looking all around I could see nothing, scanning the slopes and the summits of the peaks that surrounded us brought nothing to the eye, for quite some time as we headed upwards every now and again I could hear the cries and each time I stopped "Nothing" was eery but eventually I convinced myself it was nothing more than the wind playing tricks..... Chris agreed although looking at me strangely lol We had a good laugh as the ascent continued, however we were slightly taken by surprise to see a guy on a solo climb coming down towards us..... must have been a real early start for him, this could only have been just after 10am, so much for being the first out lol. The pace was good and looking back down the route we had taken showed just how well we had done considering the conditions, we had now reached that part where the route was now covering over in ice and trying to get a grip at some points was becoming slightly more difficult, not crampon difficult more of a dancing on ice difficult 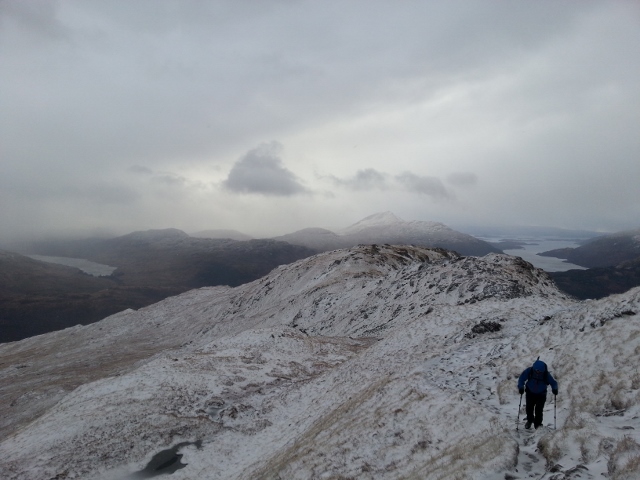 Andy On The Climb Part of the way up we had spotted two climbers above us and as time passed they had either sped up or moved of route as they had been lost from our line of sight, we had taken some time out to re-fuel, some drinks and snacks & some Kendal Mint Cake for a quick boost, not long after we started our climb again we came across the two climbers that had been ahead of us most of the ascent, they had snuggled into a small piece of shelter to get out of the harsh hail/snow & wind that at some points could have lifted us right off our feet, we had a quick look to ensure they were ok and then we continued, the summit at this point could not be to far away so we moved on. Standing at this point is where the wind really kicked in and although we stopped for a pic there was no way we were getting to close to the edge, flying was not on the agenda today..... Ok pics taken it was now time for the final push to the summit, we moved at a good pace well as good a pace as you can take when you are surrounded by the kind of sights we were lucky enough to witness that day, God's Country in all it's wonder. The views were exceptional in fact breathtaking at points, if anybody wonders why we do this.... just look at the pictures, this is what drives us to climb. before long we had reached the summit and what surrounded us was picture postcard views We had reached our goal and what a goal it was, sights and views to be carried for a lifetime. We had endured the Climb, the Hail, The Snow & The Wind, In the wind we had even heard the cries of lost voices.... just the wind playing with our minds. The day was ours, a day not to be forgotten. As is said "Children Of Mountains Never Grow Old"

Nice one Geo, some cracking photo's - does look a bit white everywhere

Took ages to find the time to sit lol, been a busy period, Hope you had a brill Christmas m8

Seems like a while ago mate but yeah was a great day, looking forward to our next climb Chris

Mountainlove wrote:Lol know the feeling when you hear voices and there is no one

Honestly I thought I could hear shouts/calling from the distance

, in that weather you always think the worst however it could only have been the wind playing tricks, was a great day

Hey, nice report and pics! Great day and had loads of fun trying to push through the wind, sleet and snow.

Flump wrote:Hey, nice report and pics! Great day and had loads of fun trying to push through the wind, sleet and snow.

Was a great day Andy, Looking to get something in this coming Sunday if you guys are free then I finish on Thursday 8th for 7 days so looking to get out then also.

Let me know if you & Chris are free m8

Sounds like you had a great day. Strong wind and ice makes me think of the thin line between exhilaration and fear.

litljortindan wrote:Sounds like you had a great day. Strong wind and ice makes me think of the thin line between exhilaration and fear.

You mean the buzz we all crave

was a great day thanks