Returned home on Saturday night to wake up to amazingly thick frosts on Speyside on Sunday morning. 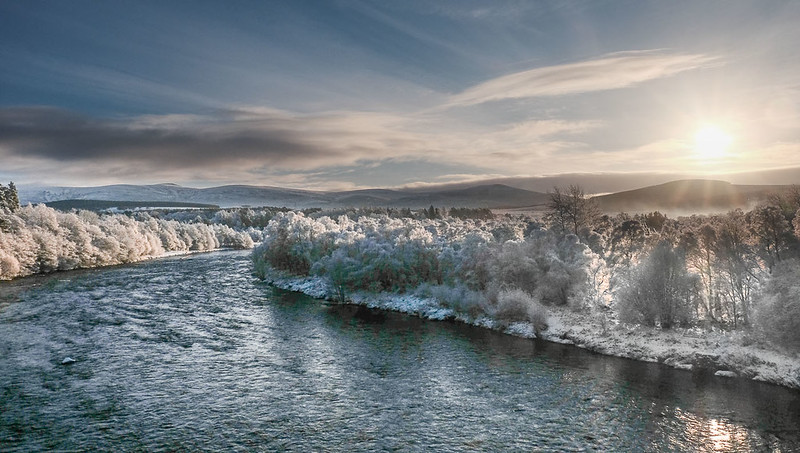 After seeing that, just had to make plans to get out on Monday. Been wanting to get out on the snowshoes after drawing a blank last winter - just too many storms. Carn an Fhreiceadain seemed to fit the bill - a bit of a trudge on tracks in the summer, but ideal easy snow-slopes for the winter snow shoes. The added bonus was the population of mountain hares on this hill. I spotted lots of these on my last visit, and having listened to a recent talk by local wildlife photographer Neil McIntyre - who has some truly stunning hare shots - I was keen to have a go at photographing them too. The downside was this meant lugging the heavy lens up a hill!

Slippy tarmac up to Pitmain Lodge from Kingussie, then an increasingly snow-covered track led up towards the hill. Once at the Green Bothy we started to spot the hares. 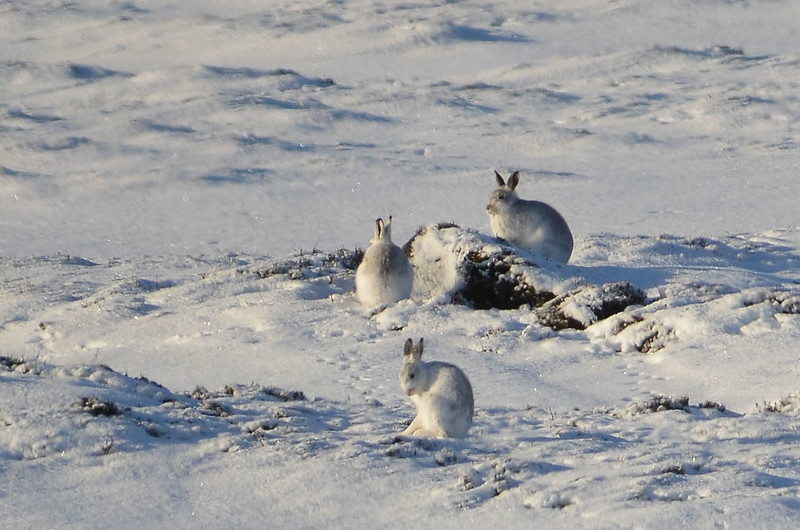 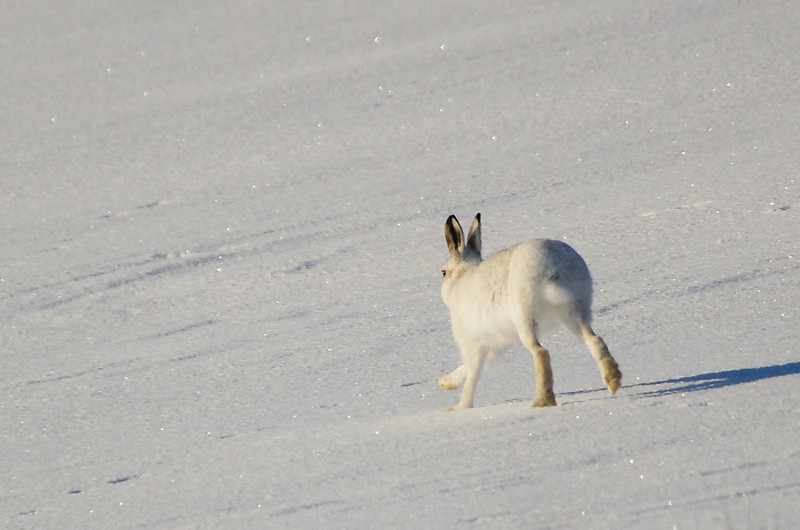 They are pretty shy creatures, but eventually saw some a bit closer. They have very distinctive faces, each with different colourings and features.

Very sad to see from dogplodders' previous report that these most beautiful and graceful creatures are being shot here for sport. 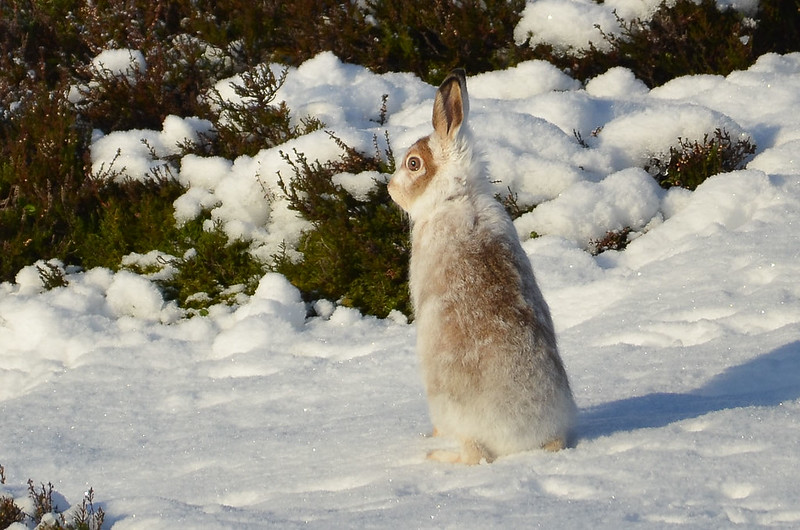 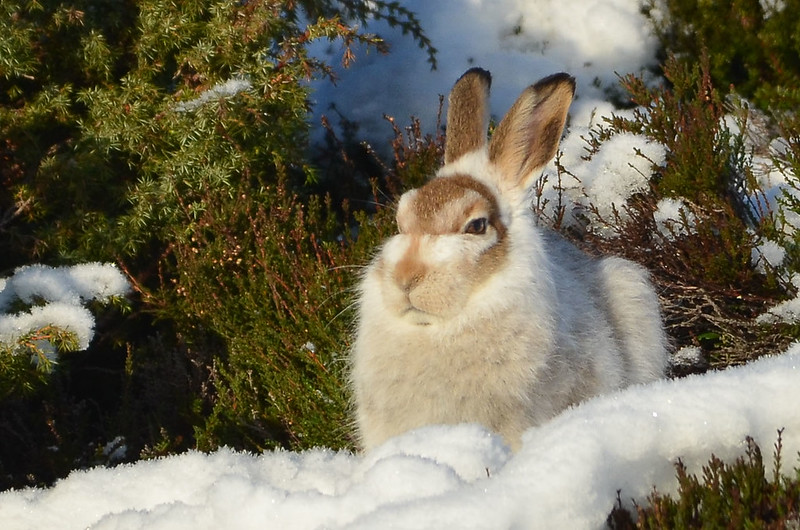 Continued on up the hill, now wearing the snowshoes - actually a pretty good day for them as the snow was quite deep on the ascent, and the post-holes alongside told of other people finding the going more difficult! It's always a struggle getting out the first time after all the mince pies though.

Once up on the ridge the going was less ideal for the shoes as much of the snow had been stripped by the winds. The mist soon enveloped us as well. 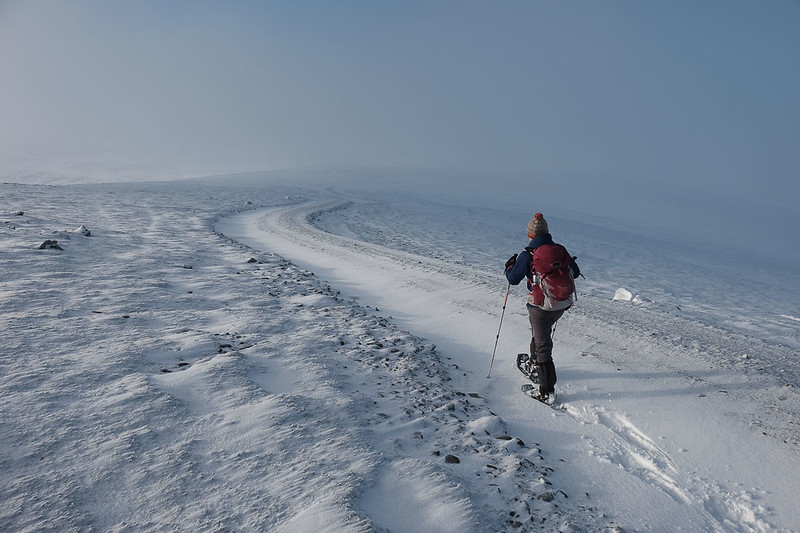 Just as I thought we weren't going to miss the views again, the mists parted and a bit of winter magic was revealed. The visibility to the northwest in particular was stunning. 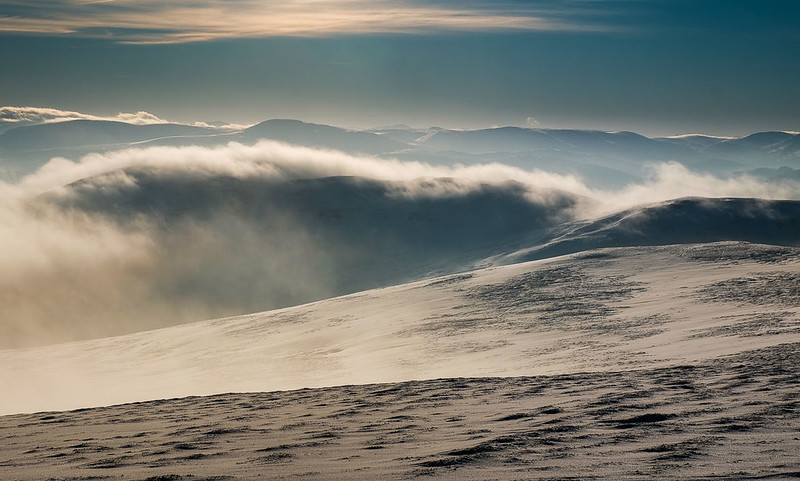 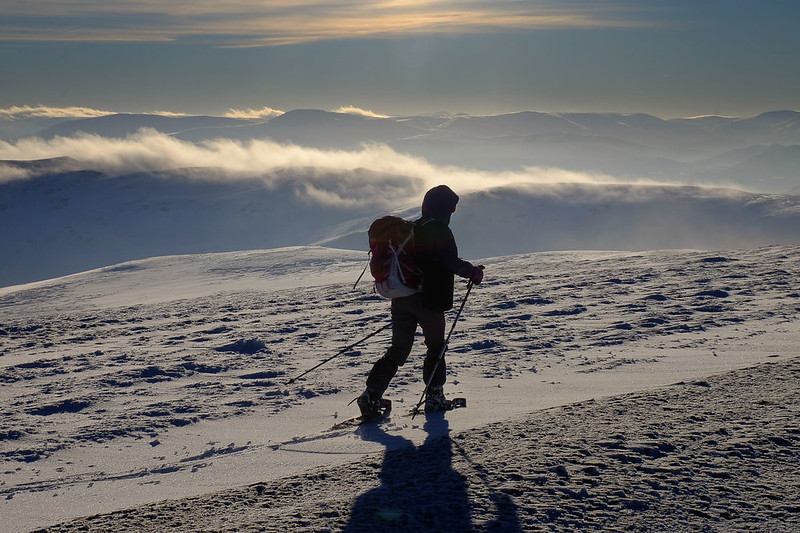 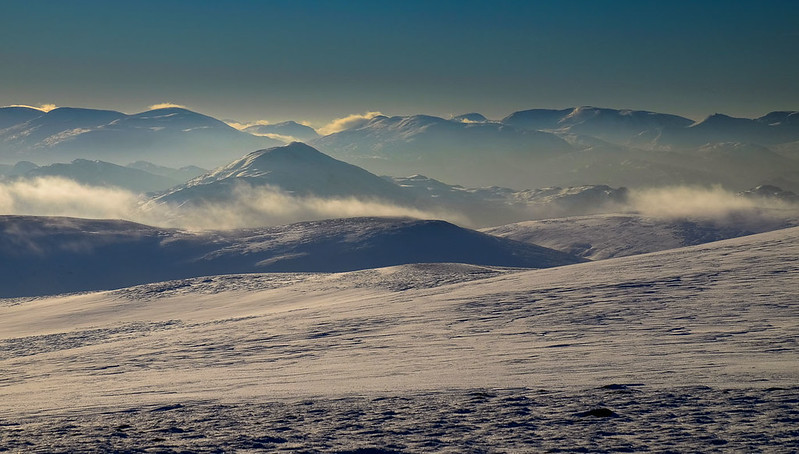 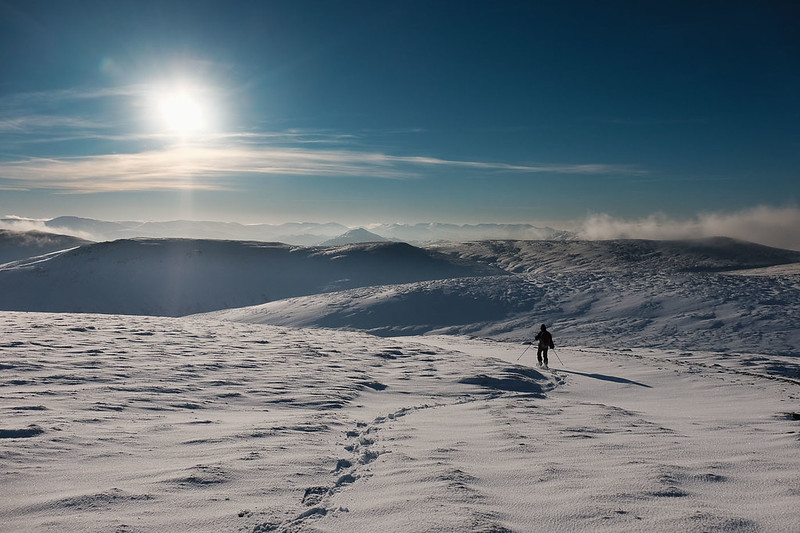 All too soon the descent began, with the Glen Feshie hills rising on the opposite side of the Strath. 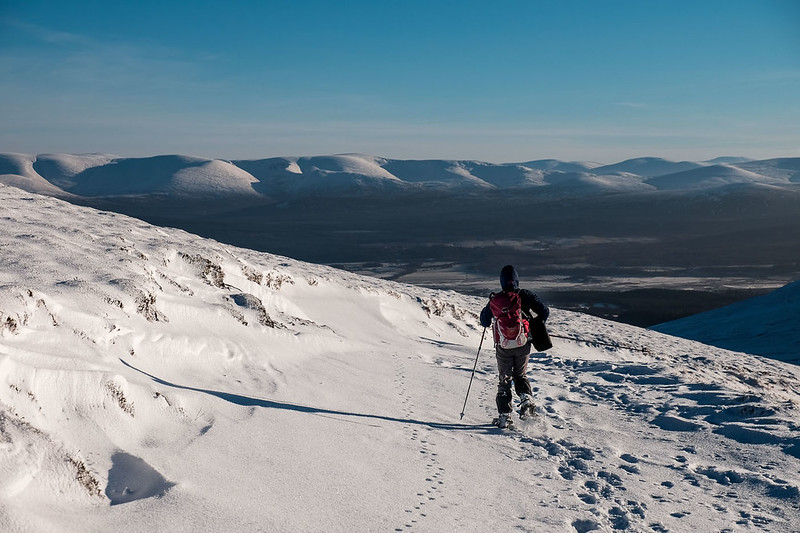 As we reached the lowest of the snow, we were passed by a cross-country skier, but it was soon time to take of the shoes. A great day was sealed by the magical low early afternoon light. 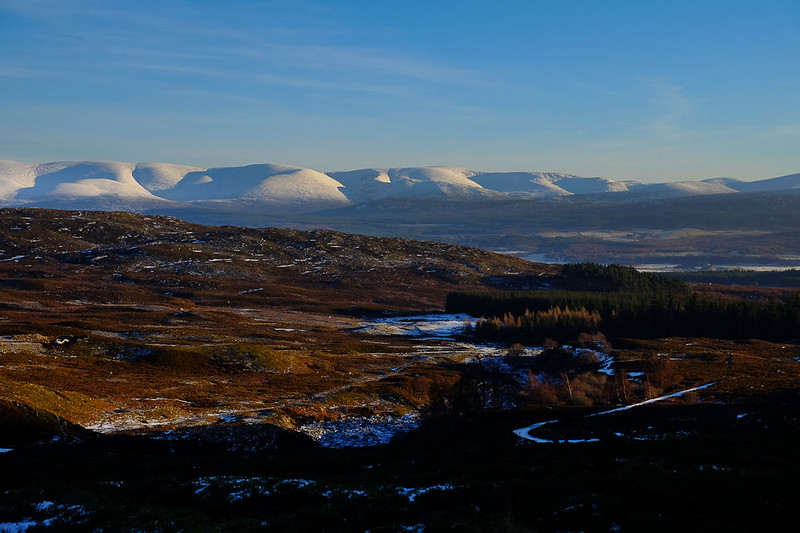 Great shots of the hares Paul. Definitely worth carrying that big lens

Paul Webster wrote:Very sad to see from dogplodders' previous report that these most beautiful and graceful creatures are being shot here for sport.

They are shot for food. And are damned tasty!

" Hares in Hare-blood Sauce Take hares and cut into serving pieces then boil them with their own blood in broth. When they are tender, remove and place in cold water. Pick over the meat and wash clean. Cool the broth and pass through a strainer. Take the blood and place in boiling water. Boil it and then pass through a strainer. Take unblanched almonds, wash them and grind them then mix with the cooking liquid. Place all the ingredients in a pot. Take onions and parboil them then pound until fine and add to the cooking pot. Season with powder fort, vinegar and salt. Modern Redaction Ingredients: 2 rabbits (or hares) cut into serving pieces blood from the rabbits or hares 1l gode broth (made without breadcrumbs) 200g ground almonds 3 onions 1 tbsp powder fort 1 tbsp white wine vinegar salt, to taste"
http://www.celtnet.org.uk/recipes/roman/fetch-recipe.php?rid=roman-aliter-leporem-ex-suo-iure

Read the title and was expecting a guide for hares on how to use snowshoes.

I quite fancy a set of those there snow shoes!
They look like they save a lot of trudgery! (real word!)

Wonderful photographs. Just goes to show the views I missed when doing this Corbett, freezing cold wind with spindrift and low cloud, I was glad to get off the summit. I see it's deffinately worth a re-visit now

Two of those hare shots are worthy of the Countryfile calendar!

Have you thought of doing a Walkhighand one?

Some stunning pictures you have there Paul well worth the effort of taking the big lens.

That looked a great day out, Paul - some cracking wildlife shots. It's a good hill for the bike but not in this sort of weather - snow shoes did look more appropriate - cheers

Annoyingly, that shows up the contrast between the 29th and 30th rather well. Should've got my act together a day earlier.

Really enjoyed looking at your photos Paul, that first one takes my breath away

I saw a mountain hare for the first time last year, but it appeared so suddenly I didn't get a very good photo. I was surprised how big it was, about the size of a small dog.

I can hardly believe anyone would shoot such a beautiful animal, makes me so angry

Great views/pictures. One for us to try in the spring maybe.

Great pictures there Paul, really liked the shot across the river, would make a nice Christmas card. Think you will have a lot of us contemplating snow shoes now...