Sun, Skies and Snow on the Hill of the Thunderbolt

Sun, Skies and Snow on the Hill of the Thunderbolt


Our weather window for the Christmas holidays (and last for 2014) was becoming apparent this weekend, so with permission from mum to head for the hills, I proposed a shortlist for dad of munros we could do. He picked Beinn a' Bheithir, so that's what we decided to do.

We decided we'd try the Walkhighlands route to give some variety rather than Steven Fallon's, which is straight up and straight down.

It was our earliest start yet, up at 5, to drive to Ballachulish for first light. We were hoping for some snow at the top, but weren't too optimistic given the recent thaw. However, we did decide that it was going to be cold at the top, given the -6

shown on the car over Rannoch Moor.

We were away and walking at 8, which we considered to be pretty good. Followed the track to the foot of the ridge, then headed straight up to try and gain the ridge. The hard frost turned to snow at about 150m, then as it got thicker it was a lovely quantity, not enough to walk on but just enough to go everywhere and make your life a misery

We targeted a lonely tree towards the top of the steepest slope, and just beyond this we encountered a HUGE path

As we began to follow the path, the views began to open up and the sun started to hit the tops of the hills.

Over Loch Leven and Loch Linnhe to Morvern Loch Leven and The Mamores We eventually gained the ridge and got a view of our first munro. Sgorr Bhan on the left, Sgorr Dhearg on the right

Continued as the ridge steepened and we saw the sun for the first time. Back down the ridge and over to the Mamores

Eventually reached the top of Sgorr Bhan. We were very disappointed when we saw the cloud flowing on from the west. Dad and Sgorr Dhearg in the cloud

Fortunately the cloud started to clear. We discovered a snowman. The snowman is called Ben

The ridge ahead was lined with cornices and hard snow, so we donned the crampons and headed on. Heading up the ridge to Sgorr Dhearg

Reached the first and highest munro of the day, Sgorr Dhearg (1024m). Headed towards the bealach and Sgorr Dhonuill. The ridge up to Sgorr Dhonuill is a slog in the snow, until the final ascent which is a bit more interesting... I'm only smiling because we've stopped The peak itself and some marvelous skies

Reached the summit with little difficulty. The summit plateau is huge compared to what you'd expect from coming up. The plateau and some more skies

Had some lunch on descent to the bealach, before it was time to lose the ridge. The forestry of Gleann a' Chaolais 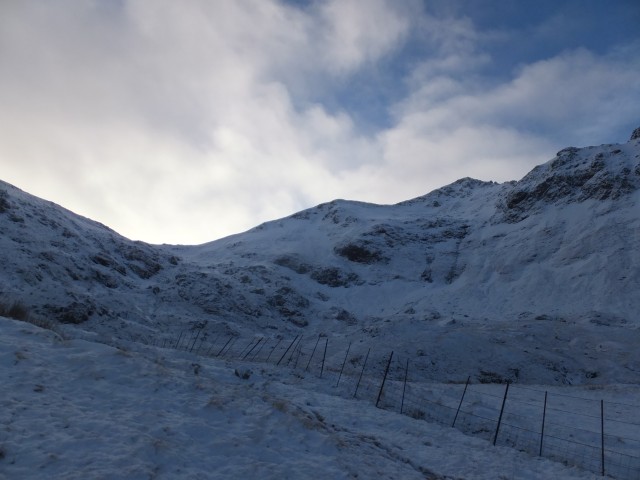 Looking back to the ridge

We soon hit the forests, which were quite interesting actually. It's always nice being in and out of the trees. The path through the forest is a constructed path which would be great in summer, but in winter it freezes, making the steps a death trap and absolute nightmare.

Before long, we hit the forest track, which would take us to Ballachulish. The peaks above Coire Sgreamach

The forest track was a nice walk, other than the fact my legs were dead from the descent

We reached the A82 before long, which was very noisy and tedious so we got bored. There was an interesting church, however. St John's Church and the Meall a' Chaolais ridge behind coming down from Sgorr Dhearg.

Loch Leven was beautiful as we arrived back in Ballachulish. Toad in the hole was beckoning back home

, so we left hastily.

Enjoyed the report and you've got some great photos on a nice day, but if I found myself up there without my ice axe, I would be terrified.

Great report and smashing photos !! really enjoyed the story there.

I was on the Buchaille heading up at the same time as you and took a shot about 11am down glencoe to the bridge. I wondered at that point if anyone was on thunderbolt in such great weather.

I hope the route down wasn't as boggy as when we did it!

Great photos high up but I really like the first and last - which you could have taken without all that effort!

Hi, Well done..
I thoroughly enjoyed seeing your pictures and reading your report,,, it looks absolutely fantastic and I am climbing this next week in the snow so its great to read your report to give me an idea of what is expected,, pics are fantastic by the way