you will love this walk, you are so close to these huge contraptions you can even touch them and get your photo taken at the front door

On the flipside, if you are allergic to turbines you will have to plan your route very carefully

I wasn't planning to fit in another walk before the end of the year, but Mrs F was planning to go to Edinburgh for a shopping wander, now as much as I love shopping (tongue embedded firmly in cheek), I quickly checked the forecast and things were looking promising, so an executive decision was reached the hills beckoned. Next, where do I fancy, Munro's and Corbett's would involve a bit of driving so Donald's would be the target and because I wasn't driving as far I would have more time outdoors

Once I had advertised my plan on WH Karen popped up out of the woodwork and volunteered to accompany me as she hadn't been out for months and was itching to get some fresh air. I PM'd her and we met up at the Park & Ride at Straiton (near IKEA) and both jumped into my car.
The informal parking area at the start of the walk is big enough for about 6 cars, if the grassy area isn't too soggy Sign at the car park, you are parked right next to Gladhouse Reservoir

We set off at about 9.15am, weather was dry and a bit blowy and this was one the few walks where I have had my gloves on all day, either it was a bit cooler or I am getting a bit wimpish

Initially you follow the road which takes you to Moorfoot Farm and then the track which heads almost due south towards the hills. The track is littered with puddles which were covered with a deceptive thick layer of ice, the plan was to follow the WH which had been downloaded onto my phone. When we left the track and headed uphill, the ascent was quite a shock to the system, quite steep but as with all smaller hills you know the pain won't last too long Karen enjoying her first ascent for a wee while Looking back towards Gladhouse Reservoir Anyone able to tell me what this strange circular walled space is used for? Karen enjoying giving her lungs a bit of a workout, note the offroad vehicular track that we were loosely following

The walk up to Blackhope Scar was a bit of a faff, we seemed to be wandering all over the moorland and although we were scanning all the horizons, we weren't overly confident which rounded top would be our first destination

We consulted the map a couple of times to try and get our bearings but rolling hills are featureless, the only saving grace were the wind turbines - you won't hear me saying that too often

As they were marked on the OS map we could then confirm we were heading in the correct direction.
Shortly after we spotted the long line of fence posts that we knew headed up toward the summit, so it was just a matter of keeping them on our left hand side, which wasn't difficult, however the terrain underfoot was far from ideal, undulating, peat hags & lot's of squelchiness, however most of the damp bits were frozen over, had they not been frozen we would have taken much, much longer 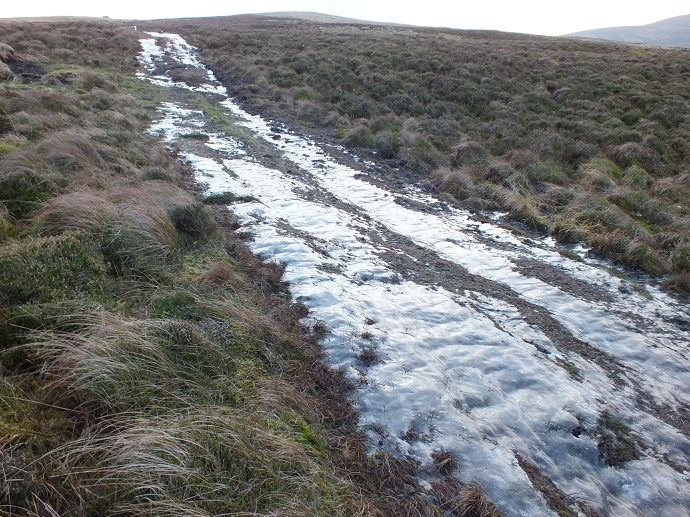 The landrover tracks as you can see very icy Grouse Butts, we passed 6 of them The summit trig of Blackhope Scar

Eventually the Trig came into view and to touch it would involve climbing a fence or two if you fancied, the Trig is located very close the junction of 3 fences

Next target was Bowbeat Hill, once again we followed a fence line, keeping the fence on our right this time, similar terrain underfoot much squelchiness, but as were descending it didn't seem too bad A sample shot of what to expect underfoot Another nearby wind farm Another wind farm on the horizon The wind farm we would be mingling amongst If you look very carefully you may spot Karen, just in front of the wee house thing For the turbine spotters - here is a map of the farm

The summit, otherwise known as the highest bit on Bowbeat Hill was a complete non event which involved leaving the track and going up the tussocky grass to what looked like the highest spot and then returning back to the track.
After saying goodbye to the green machines it was back to the normality of underfoot squelchiness, once again we weren't overly sure which rounded hump was the summit of Dundreich so we just headed uphill following the WH route. After a wee while the summit Trig appeared on the horizon and the views as suggested on the WH route were the best of the day The view towards the Pentlands A big thanks to Karen for being an excellent walking companion (again), thoroughly enjoyed the day and hopefully once the schools are back I will be venturing out again and probably heading south

You don't have to be high up to have a good day.

I'm with him on the matter, I abhor them!

Great to see K back on the hill, hope to catch up with you both soon.

Good report, just a pity I'm stuck at work and typically, I'm in Glencoe this weekend and the weather looks a bit hit and miss.

Hopefully get back out with you guys in the New Year

Must admit FF, this is a part of the world I have never walked in.

If you enjoy walking through windmill farms take a peep at Steele's Knowe in the Ochils.

You don't have to be high up to have a good day.

I'm with him on the matter, I abhor them!

Great to see K back on the hill, hope to catch up with you both soon.

Thanks Chris, see you soon

Backpacker wrote:Good report, just a pity I'm stuck at work and typically, I'm in Glencoe this weekend and the weather looks a bit hit and miss. Hopefully get back out with you guys in the New Year

Thanks Gary, good luck in Glencoe

Gordie12 wrote:Must admit FF, this is a part of the world I have never walked in. Looked like you had a good day. If you enjoy walking through windmill farms take a peep at Steele's Knowe in the Ochils.

Looks good especially for shorter winter days - have enjoyed a few trips south recently but haven't been to this bit yet. Guess we're starting to get used to seeing turbines all over the place

Thanks, Martin. It was a grand day out, wind turbines notwithstanding. I have to say it was the endless peat hags and slop that was putting me off Blackhope Scar rather than the turbines (in fact I think high moorland close to the central belt is the best place for them). I stood on Windlestraw Law looking over this way at the beginning of August and I just couldn't muster up the enthusiasm to go up Blackhope as well

Happily your way from the north looks more pleasant and interesting, so I might yet get around to this one in 2015