This report is still to be edited:-)

Checked the BBC weekend weather report for the Arrochar area and nearly fell over when I saw a huge ball of sunshine for both days.

The combination of sun and snow on the hills is always spectacular and I headed off up the usual path towards Ben Ime. Ben Arthur was looking splendid in it's white winter jacket. 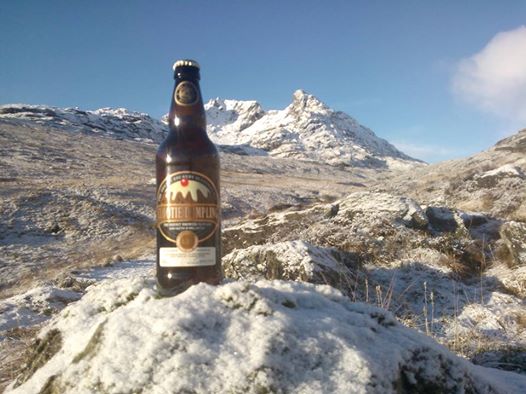 I was accompanied by my good friend Shadow and also a few beers to celebrate with at the summit :-0 The views across to Loch Lomond and the three lochs are always more spectacular in winter framed by the snow covered hill tops of the surrounding hills. The Cobbler and Ben Narnain always look spectacular from this angle off Ben Ime. Watch out for the yellow snow and ice formations

It is an excellent route marker but not to be eaten! Some of the ice formations can be spectacular at this time of year. I eventually reached the summit of Ben Ime around 3pm ...a little later than intended having under -estimated the effort required to plough through the knee deep snow on the way to the summit which always takes more time than normal, but it was still great fun.

I immediately fired up the Bubba-Q and got the beers chilling whilst I watched the sun go down. Just as I was tidying up the Bubba -Q, two lads from Czech land appeared out of the snowy spendthrift which had been whipped up by the wind sweaping across the mountain summits. They were amazed to meet Bubba , the legendary steak man cooking his Ribeye on this remote mountain top and insisted on taking a few photos of the scene. They bounced of back down to the bealach between Ime and Luibhean to retrieve their rucksacks they had left there for the final ascent. Leaving me once again to enjoy the final setting of the sun in the peace and tranquillity of this wintry summit. I realised that I had better get off the mountain before it got to dark to see my way and regretfully left the hot embers of the Bubba-Q to die down with the sunset. I passed a few hardy winter campers setting up base at the fence line of the Bealach a Maim, we exchanged a few words and then I sped off down the usual final track with fading light following closely behind me whilst the sun sank below the horizon on another epic day at Winter Boot Camp. The lights of Arrochar twinkled in the distance below as I made the final descent by head torch of the mountain ...always a fun experience.:-0