Sheffield Pike in the morning

Sheffield Pike in the morning


(I'm still working my way through my backlog in reverse - my new year's resolution is going to be to write up every trip within a month of doing it!)

This was another bright idea - there had been no chance of getting to Sheffield Pike in the bad weather of the day before, but if I could get another early start, I could be over it and back to the hostel by kicking out time, without having to take a bag with me.

The route took me up the exciting path up the hillside just above the hostel, although it turned out not to be nearly as straight up as it looked at first glance, with the path slanting away to the left through bushes before zigzagging back on itself.

It was an interesting part of the valley, with various industrial remnants, starting with an old leat towards the bottom, and then climbing up past an odd flat-topped place which looked like it might be a bing built against the hillside. 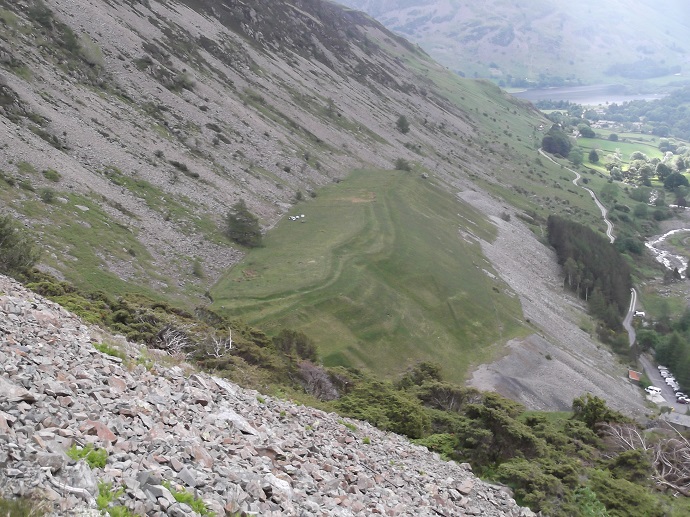 The path worked its way up under a rocky outcrop, and then turned to go around it, but although it was a clear path, there was what seemed to be a barrier of stones across it. So I went straight on, and found myself among the old mine buildings instead - I could tell after a while that this wasn't the right way to go, but it was interesting, and a path did lead through and out to join the main path again. 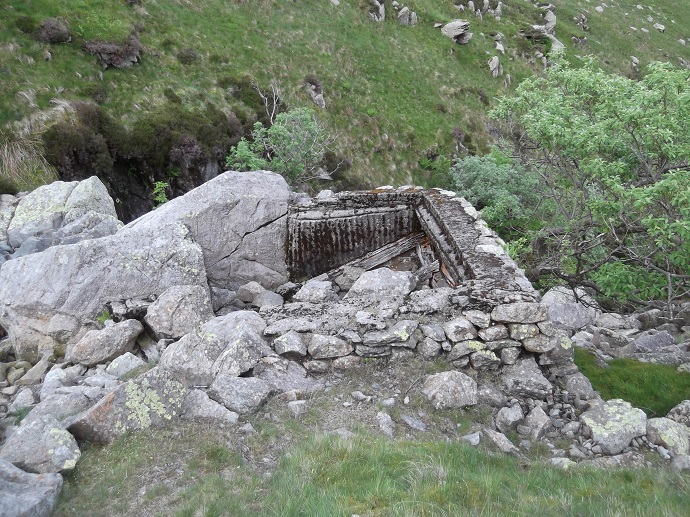 The flat ground at the top was definitely industrial wasteland, just a stony emptiness where nothing grew, and like nothing I had expected up among the hills. But it seemed to be a quite a central place, with various paths leading off including the main Sticks Pass one. Bridge in the wastelands 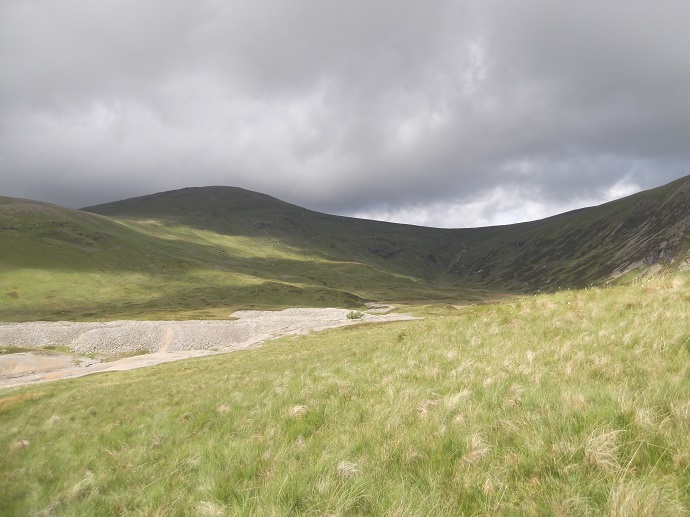 The path towards Sheffield Pike was clear enough, but very wet, and muddy in places, although it did improve higher up as the ground became rockier. 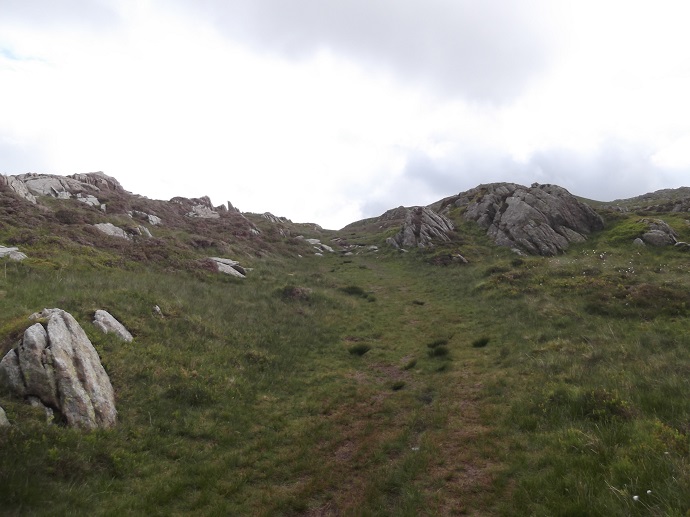 The summit had a nice view of Ullswater, and although not the prettiest around, I didn't find it nearly as dismal as Wainwright obviously did. 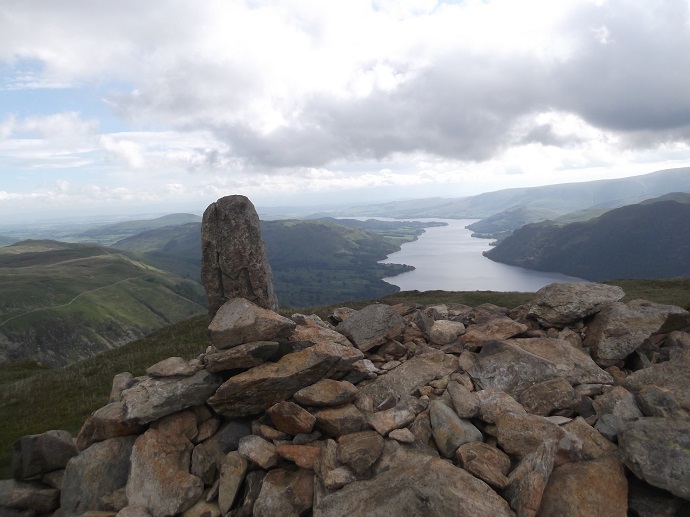 The inscribed stone which was supposed to be beside the summet cairn was now built into it - not that the cairn was particularly built. 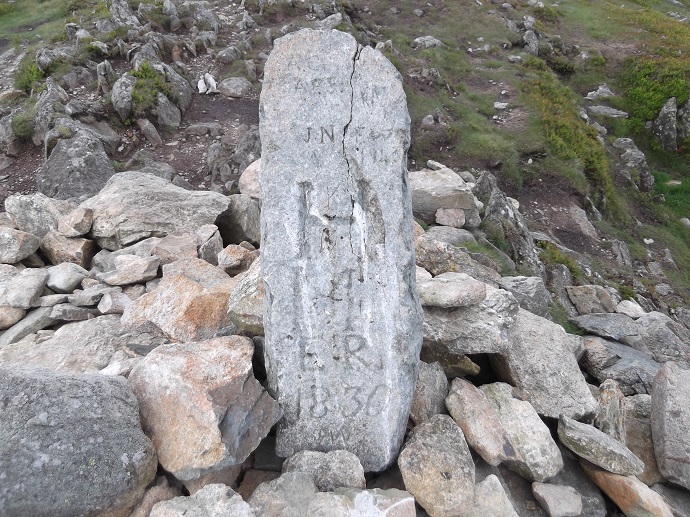 It had taken me about an hour to come up, so I now had not quite an hour to get down, and headed on, towards Heron Pike. The way down was pretty steep - nice and adventurous, but not very good for hurrying down. There was always a path to follow, although not always much of one, but at some point I realised that the path had split while I wasn't paying enough attention, and I was now heading down the Glencoyne path rather than the Glenridding one - I only noticed when I found I had the wrong view in front. 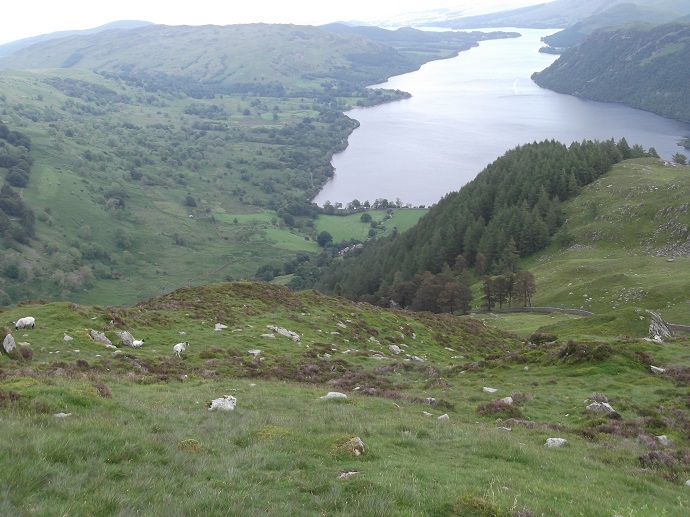 It only meant that I met the wall halfway between the two valleys, instead of at the end, and there was a bit of a path along it - it just added a bit to the walking time. Looking back from the wall

There definitely wasn't time now for a detour to the summit of Glenridding Dodd, although it was so close, so I headed down the good path towards the road. 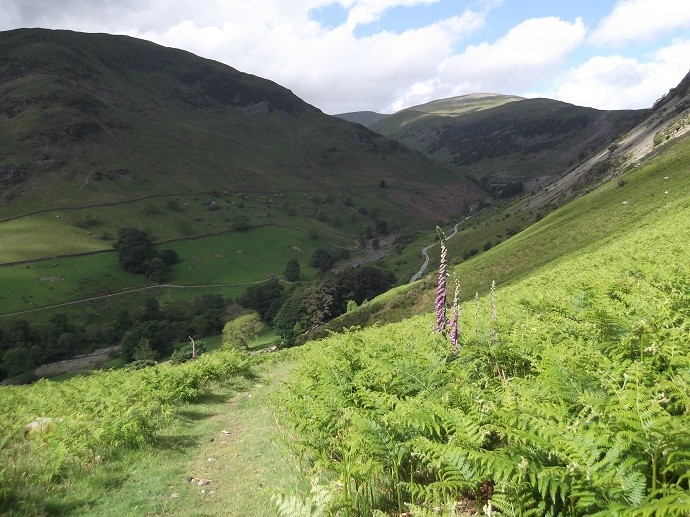 It was quite warm for hurrying, and the path got quite steep - that feeling of descending into the chimney pots below. And then it was just a case of hurrying back up the road to the hostel, to collect my stuff before I got too much in the way of the people clearing up. So maybe not such a clever idea, but a nice trip.


SheffieldPike.gpx Open full screen  NB: Walkhighlands is not responsible for the accuracy of gpx files in users posts