This was supposed to be an easy day, just three hills in my way as I headed back towards Windermere (plus the one squeezed in that morning). So I had a fairly leisurely start, wandering along to call at the shop in Patterdale, and then along the road past Bridgend and round the back of Brothers Water to Hartsop Hall. 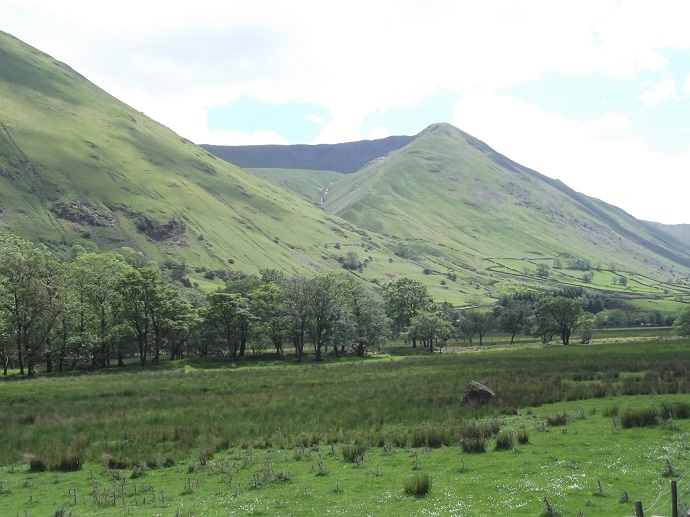 The start of Dovedale was slightly confusing, as the footpath marked on the map was neither the most obvious path on the ground or the one I wanted. Sorted out and onto the uphill path it seemed that I couldn't get away from mining relics this weekend, as the track led up past another set of old buildings. After that it just kept rising, along the wall - through the trees and on, up above Dovedale. It was a very pretty valley, but I was glad I hadn't gone through it, as there were quite a lot of cows wandering about beside the river. 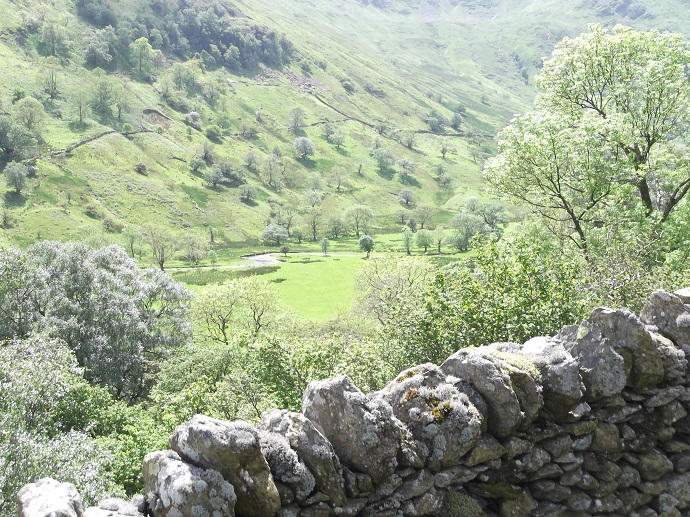 A wall which should have come up to meet the wall I was following I never saw, but I did eventually come out of the trees, and then after another long pull upwards to the stream running down from Gill Crag. There were some very mountaineering cows well up on the hillside at the head of Dovedale, but I managed to convince myself that they couldn't get to me, and ate my lunch perched on a rock beside the path.

The bridge over the stream took me onto the next stage of the journey, out of Dovedale and into the beginning of Hunsett Cove above. This was a very different kind of valley, narrow and high and hidden, as it turned the corner away from the entrance. Dove Crag was beginning to tower up ahead, and the crags of Hartsop above How were still towering over me on the right.

After following the valley up for a while the route turned off uphill again before Dove Crag. 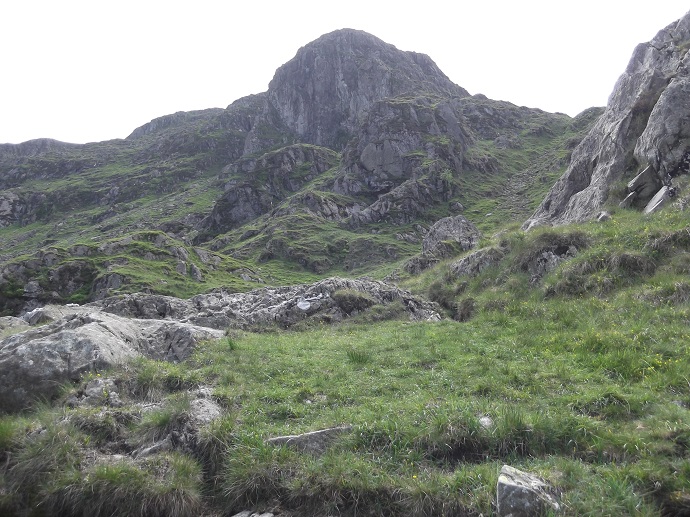 I was trying to follow Wainwright's pathless route, up under the base of the crags, but I couldn't make his pictures of rocks match up to any of the real patches of rock around, and I found myself following the path up past the ruined hut, although I couldn't imagine who would have wanted one away up there. 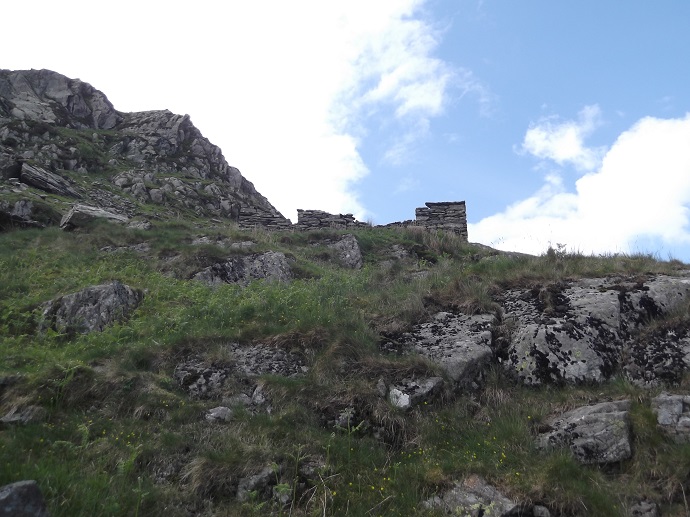 When I stopped to rest and turned back to look at the view it made me almost dizzy - I was now perched high above my second valley, having climbed a long way out of the first to get into this one. I found this bit a very slow, hard climb - go and stop and go and stop. There was no chance I was doing extra climbing to look for the cave, even if I'd had time - getting to the top was enough of a challenge. After a long time climbing I did come out at the tarn, which was more like a muddy puddle, and although there was still futher to go than I'd thought, it did get easier from there. I was still skirting the rocks of the crags, then heading for the wall which joined Dove Crag and Hart Crag to follow it to the top. 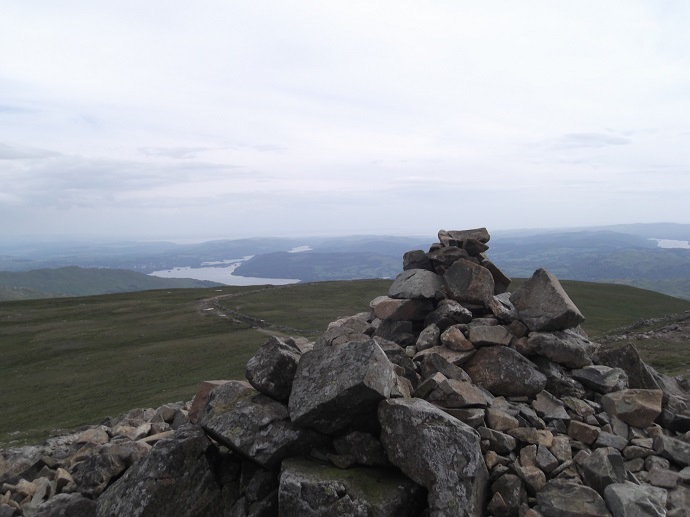 The views from the summit were good all round, although hazy, but I was still especially enjoying the views west. According to Wainwright, I was 5 miles from Ambleside, with about 2 hours before the bus I wanted to get (and another 20 minutes until the last possible one, but with the summer crowds I was a bit worried it would be full), which seemed fine except that it had taken me nearly 4 hours to cover the same distance from Patterdale! Still, I knew it was an easy way down, and according to the map it didn't seem to be as much as 5 miles.

Down as far as High Pike was grass and not very steep, just a nice walk - not quite a 20 minute mile, but close. It wasn't quite sure that it was High Pike when I came to it, as there was no very obvious rise - but I didn't find any other summit with a cairn on it, so it must have been. After that it became much more fun, as it turned into the kind of the rock path that's solid enough to just bounce along, mixed in with higher bits to slither down, and without the mud or loose stones you have to be careful over.

Scandale down below had an interesting collection of walls, as well as a very wiggly river. 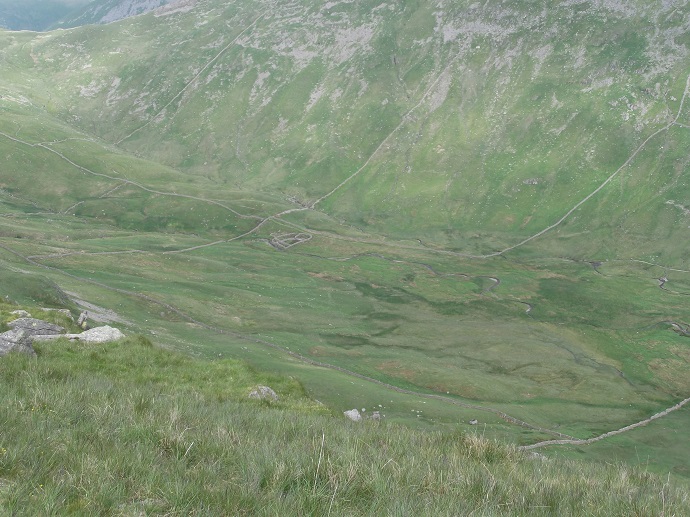 The summit of Low Pike, beyond the first cross wall, was also more fun, and a more definite summit, as you had to climb a bit up to it. Below that, Ambleside was coming definitely into view, and it was beginning to be a case of counting walls until I got there - 3 broken ones, and then finally one whole one about the level of High Sweden Bridge. 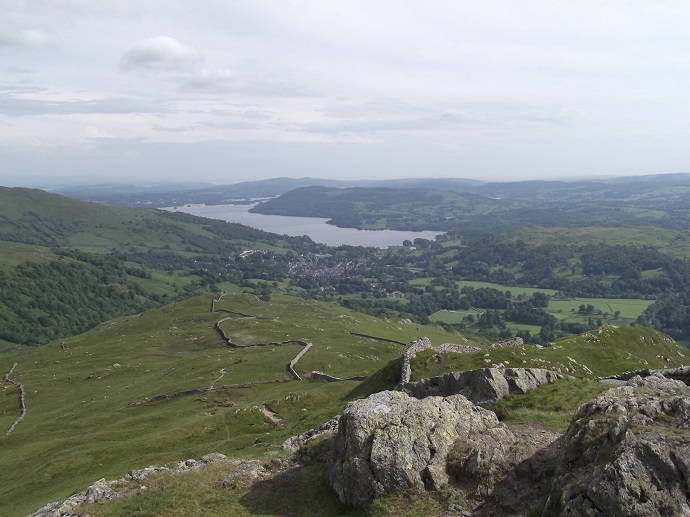 Before the third wall a path took my away to the left round a boggy patch, and round the rock step as well - looking back, I was surprised to see how high it was - much more than a step. 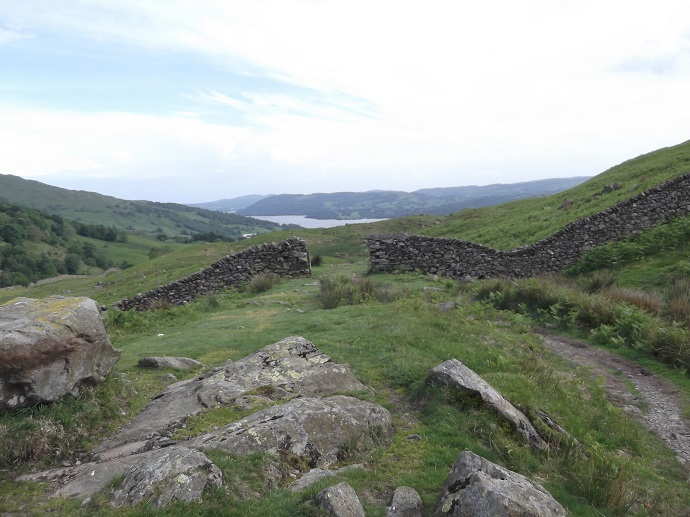 Beyond the whole wall things were becoming less and less hillside, and more farmland, or at least parkland. Another collection of walls brought me down to Low Sweden Bridge, and a minute to look at the waterfalls

By the time I came out on the road at Nook End Farm, I was definitely hoping to catch one of the earlier buses, especially if there was a stop near the road end. The way down to the main road was slightly less straightforward than I'd thought, because there were a couple of tempting turnings - but I resisted them, and came out at the main road just in time to see the 555 go sailing past, followed, once I'd turned onto it, by the 599.

Still, I knew I was quite close to the centre of town, and with a summer crowd trying to get onto two buses at once there was a chance, so I hurried down after them, only to choose the wrong road at the junction and find myself losing the bus stops. But as I went round I saw the 555 come out round a corner, and when I turned the corner I saw the 599 still loading itself with tourists, and I ran along in time to join the end of the queue.

"Have you just ran all the way from the Struggle?", the bus driver asked me - I wasn't sure I had, since I didn't realise that Nook Lane came out at the same junction, but it turned out to be true. So I got an open top bus ride down to Windermere, with quite a lot of branches attacking us along the way, and time to go to the co-op and briefly to the pub, and the end of another good weekend.


DoveCrag.gpx Open full screen  NB: Walkhighlands is not responsible for the accuracy of gpx files in users posts

Approaching Dove Crag via Dovedale is a good way to appreciate the fell from its more spectacular side. I agree it's a bit of a slog up past the old but.

You're certainly cracking through the reports now

That approach to Dove Crag looks a good route. Not sure I could be bothered with the running for the bus after a walk, certainly highlights the challenger of walking without a car.

I'd get bored of always walking round in circles to come back to where I started. But it would be useful sometimes

I did a mad catch up so as not to be trailing things into the new year - although that only applied to the Wainwright ones. And now I've spent the first few days of the year walking so I've got a backlog again!

Simon - I did enjoy getting onto those hills from the ‘back', more interesting than a plain Fairfield horseshoe, I think. But that bit was hard work!