One day in the depth of winter ...I invited Colin down to Winter Boot Camp and too bag another of the Alps, The Cobbler.

Colin is the 'original' Boot Camp recruit and was the first to pick up the 'gauntlett' and accompany Bubba on one of his treks into the Arrochar Alps. On that occasion we tackled Ben Vane on a wet, windy, misty, Saturday in May where there was still some snow and ice on the summit. It was indeed a 'baptism of fire' for Colin and a harsh introduction to the 'joys' of hillwalking in the Scottish Highlands where you can be hit with four seasons weather in one hour and we certainly did that particular day I remember. 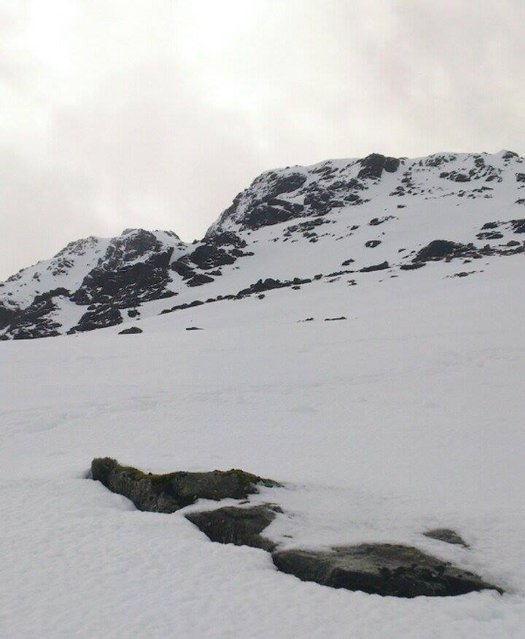 We set off up the usual zig zag track in good spirits. Glad to be out in the crisp, fresh air and very soon we started hitting the snow line just after Bubbas Creek ( not it's real name).

This was going to be an interesting journey as we looked ahead to the deep snow filled corrie of Ben Arthur.

We reached basecamp at the Beallach a Maim in good time

Took a deep breath and set off up the 'staircase' which was buried deep under at least 2 feet of fresh snow. 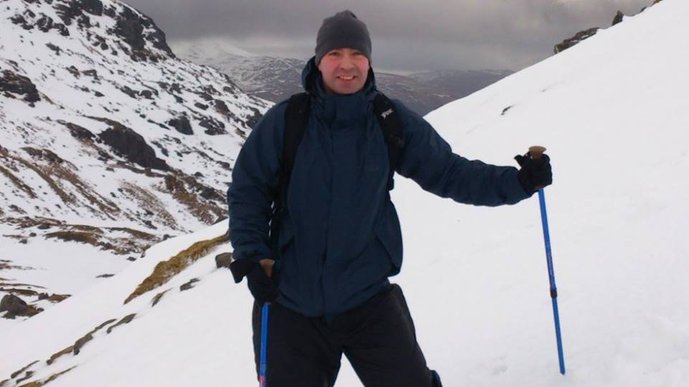 At one point I found myself flailing about helplessly having sunk waist deep into a snow drift and had to literally dig myself out as the snow had compacted around my left leg and set like concrete.

Colin looked on from above bemused and too tired to come all the way back down to dig me out...Thanks m8!

At least Colin was still smiling at this point, trusting in Bubba, and hoping that I knew where I was going and we weren't going to disappear down some deep icy crevice The going was tough as each step we took, we sank up to our knees in the snow and had to 'haul out' before we took the next step We ploughed on through the snowy wasteland..... blazing a trail across the fresh virgin snow. I used my knowledge and experience from the summer months trekking on The Cobbler and pretty much followed the imaginary line of the path which was buried deep somewhere beneath us.

Keeping a wary eye on the incline / gradient and making sure we didn't go too steep and trigger an avalanche scenario which was always on my mind, we gradually edged our way up to the summit. We reached the top after much effort and we were rewarded with an icey, clad Needle. Hillwalking in the Arrochar Alps in winter time allows you to experience extremes of temperature and conditions not normally encountered at lower levels and gives you an opportunity to test out your gear and fitness before moving on to other more extreme areas like the artic tundra of the Cairngorms plateau.

If you can't get comfortable here on these hills then you will certainly be caught out in other more extreme and remote locations. So it's a good opportunity to check out what you need and adjust your equipment accordingly for future treks. Time for celebrations having reached the summit No 'Threading the Needle today though, just 'selfies' Reaching the Needle in the depth of winter and deep, snow is an awesome achievement of effort and determination for a novice Boot Camper and as usual Colin did really well and took it all in his stride. 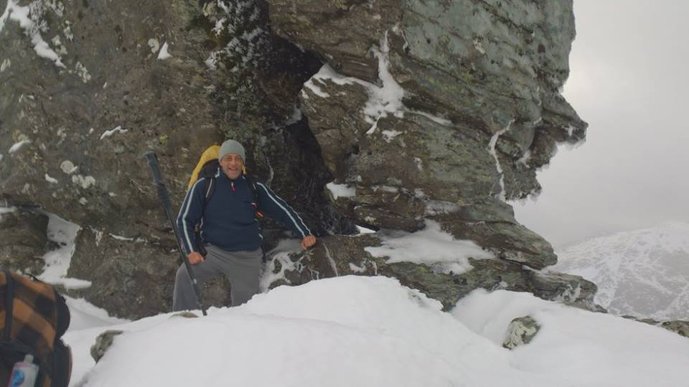 So hats off to Colin who continued to smile all the way up and back down again ...he actually looked as if he had enjoyed the hike.

Since the 'eye of the Needle was covered in snow and ice we didn't venture through on his occasion as we did not have any ropes, crampons or ice axes with us ....just beer and steaks After grabbing a few snaps of the snowy summit we headed off back down the slope.

This turned out to be loads of fun as we discovered that the quickest way down was to 'bum sledge' off the mountain.

This turned out to be great fun. Due to the incline ..at some points we were literally hurtling down the hill side at great speeds. We eventually reached the safety of basecamp at the foot of The Cobbler , Ben Narnain and Ben Ime. Whereupon I thought I would have an ice cream as reward. Avoiding the yellow, lemon stuff ...I tucked in Very nice it was too. After a while a lay down for a snooze in the snow before we set off back down the track after completing another epic day at Boot Camp.

Re: Winter Hike on Ben Arthur

Well done getting out today, and ye canny beat a good bum slide. Hoping to do Ben Lomond tomorrow

Re: Winter Hike on Ben Arthur

Hi Tomyboy...I still have to edit a lot of my posts and they can be a bit out of date on most of them

However winter boot camp is always the same in the alps so still relevant.

Are you taking the Ptarmigan route ...which is always more interesting right?

I plan to do a wild camp on Ptarmigan Ridge one day this year....... the views are awesome down Loch Lomond and across to the Arrochars.

I caught this snap in one frame last year. Enjoy!