Ever since I'd seen WillkieMurray's walking report on WH I'd wanted to do Ben More as a winter walk and with the weather looking ok for the day I headed off. The drive there wasn't looking promising, as there was a lot of fog in the Glasgow area and around Loch Lomond but it did say it would be clearer above 400m. There were already a lot of cars on the verge when I arrived just before 08:45am and by 9am I was ready to go. once on the track Ben More appeared from the morning mist I took a steady pace up the steep slope, soon gaining height. The frozen paths being un-useable All the paths were frozen As height was gained the view started to open out.

Once at the snow line the wind picked a wee bit, so although the snow wasn't deep my feet would slip sometimes so I put on my crampons on until I reached the summit. several groups of walkers behind me The wind had dropped on the summit and the views were brilliant for 360 degrees. Now at this point it was 11:25am and I planned to Stob Binnein so I never spent ages at the top which in hindsight I wish I had. So off down the slope I headed . Stopping to take pictures and enjoying the views had cost me some time and a walker that was behind me earlier was now half way up Stob Binnein , just a small black dot climbing what looked a bit off a slog, I had the time to do it, I knew I did but coming down towards the bealach I just didn't feel like it, I still regret not climbing it , maybe I'm still get used to the heavier winter boots and all the extra kit in the rucksack or simply my fitness needs to improve more to compensate for the extra weight. I don't have this problem in the summertime.

By now it was lunchtime and having not decide this earlier I was now faced having my lunch behind a rock out of the wind as the wind was being funnelled between the 2 munro's , lunch at the top would have been much better. 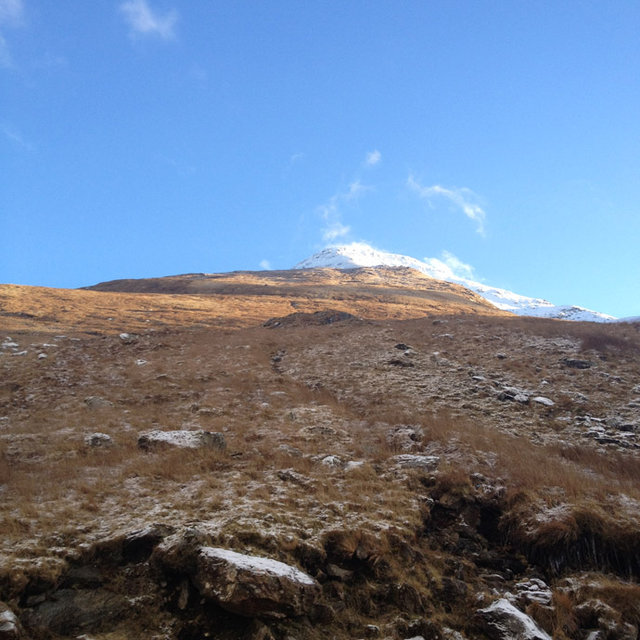 looking back up from the farm track

Once on the track it was an easy walk out ,looking up I could still see groups of walkers coming off the summit of Stob Binnein and it was only 13:30pm which just made me a bit fed up that I a gave up early.....

the mist rolling back up as I neared the car

Maybe you didn't get the 2nd Munro done but that still looked like a brilliant climb with great visibility.

I've still to do Ben More & Stob Binnein, every report I read suggests the climb up Ben More is fairly relentless

I'd say you didn't feel like it for a reason so best you headed down. Funny some days u stop for food and mince around then others it's up and down pronto.

Excellent summit pics. Better to appreciate what you got than worry about the exra bit that might have been I'd say.