Under Construction ..still to be edited

Checked the weather report for Boot Camp and it was looking good! Clear, dry and sunny all day

So grabbed my sticks, steaks and sack and set off for Boot Camp via the Oban West Coast flyer 8.30am from Glasgow. Got down to Succoth car park at 9.45am. Grabbed my sack out the bus luggage hold, crossed the busy road with care and set off up the track headed for Bealich a Maim from were I'd decide which hill if any I was going to do today. It was just good to be out early in the fresh air and walking up the glen. The car park was already quite busy and it looked as if a lot of walkers had seen the excellent weather report as well and had set off even earlier than me.

Took the usual selfies of the day and just meandered up the track with no real objective in mind. Had a few words with some fellow walkhighland trekkers... Kevin and Tom who were heading for the Cobbler.


Just after the Narnain Boulders I took a sharp right and decided to explore the eastern slopes of Ben Narnain for a while. 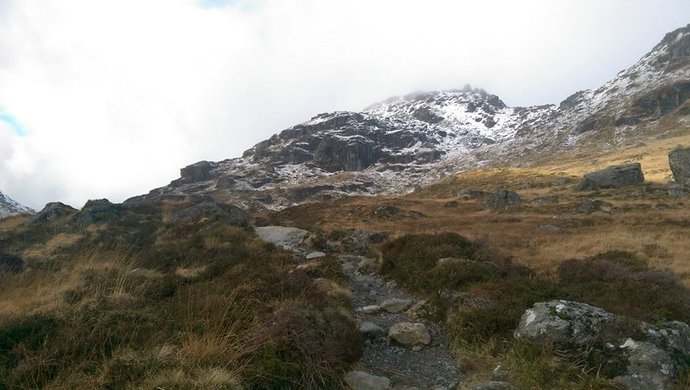 The rock face rises up above the glen like some huge castle edifice and I was looking for a way to get to the top of Narnain via this route. The icy rock walls formed an impregnable barrier and I decided since I didn't have any rope or crampons ..I'd leave it for another day.

I was just enjoying the freedom to explore the glen and the sunshine and views over to The Cobbler and down to Gairloch.

A surprise call from Sam came through on the blower. I told him I was half way up Narnain already and not wanting to miss the fun he jumped in his car and headed for Boot Camp rapid style

We arranged to meet at base camp , Beallich a Maim at the foot of The Cobbler at 2pm giving me enough time to finish my exploring around the slopes of Narnain. Whilst waiting for him at the rendezvous point I bumped into another two friends David and Catrina who had just come off The Cobbler and were heading for Oban. Small world indeed

Sam eventually arrived and we set off up Ben Ime since he hadn't been there before. It was rather late in the afternoon and I knew we probably wouldn't make it all the way to the top, but decided to give it a go because the views and the sunset are always spectacular from Ime at this time of year. Sam was having fun getting used to walking in the snow and we ploughed up the hill to within 200 meters of the summit before deciding wisely that we should call it a day at that point and come off the hill safely before it got too dark to see. So we enjoyed a few moments.. just taking selfies and watching the sun sink below the horizon to be replaced by the moon coming up from the other side. Got some beers in whilst watching the sun go done. 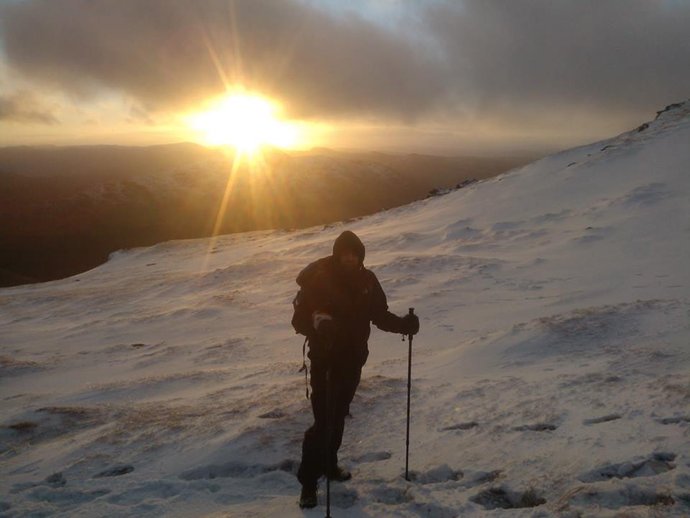 Satisfied we had seen the best of the day we headed back down the slope to the Bealaich in the fading light. Got the head torches out and we had a fun descent back down the icy path to the car park. It was a cloudless evening and the moon lit up our path off the mountain for most of the way without the need for the head torches. We could see the lights of Arrochar twinkling below us as we descended with the reflection in the loch which was as still as a mill pond. Sam who is into a bit of stargazing pointed out numerous satellites which wiz round the earth at high speed and most of us don't even know they are up there.... plain to see on a cloudless night like it was.

It was amazing to see them streaking across the night sky whilst standing on a hill side with the snowy Cobbler lit up by the moon and the sound of the Alt a Bhalachain rushing over the rocks below us.

It was just one of those special evenings to be out on the hills where the weather was just perfect.

Another micro adventure at Bubbas Boot Camp down and dusted as we headed on back to Glasgow.

Good to meet you on the track yesterday! We watched you climb higher and higher on the flank of Narnain then lost sight after a while. Cobbler was great.

Bubba Q's lmao that's awesome. Incidentally Tom (close!) was loving the sound of a bbq. Me too. Like your style

I havent got many walk reports on WalkHighlands - just the one for a bit of fun, though I got bit more going on on my website that Tom mentioned (kevinwoods.co.uk). Really gotta get that thing up to date tho..!

Count me in for a bbq Mind the Gap though Now there's a thought for a different angle on Munro bagging -- a BBQ on each summit! Nice report thanks.

I've done steak on all the Arrochars including your favourite and mine Ben Insane (Ben Vane), Ben Lomond and Ben Nevis.

I'm really going to have to try that soon! Cheers for the inspiration!

Cool report. A bit "different" to the norm!

And nice scarf and hat BTW!

Thanks Graham D ...that was my best 'jaggy bunnet' made up of 'firebrand snood' on top of a 'thermal skull cap'

Normally I'm better dressed for the weather ...as you'll see from my other reports Tartan and bubba-Qs ...new trend in 'munro bagging' methinks ...the way forward for 2015 in the hills and glens.