The second hillwalking story from my Christmas-New Year holidays. With horrible weather recently, it feels nice to return to happy moments "up there" in white, fluffy snow and with blue sky above... well, blue sky most of the time

Having successfully burned a good dollop of festive calories on Boxing Day, we spent Saturday visiting outdoor shops in Inverness. Yes, it's sales time! I managed to find a decent pair of boots that actually fit me. Of course, they are men's - I can't wear those designed for women as God gifted me with a pair of feet size 7.5... Kevin was a bit jealous of my purchase and as a consolation he bought a pair, too

Sunday looked good for another visit to the snowy world of Scottish mountains. We chose Ben Tee, as it has been on our to-do list in winter conditions for a while and it's not far to drive from Beauly. I always fancied this Corbett in white and here was the chance to bag it.
Our route, the usual up-and-down from Kilfinnan:

Track_BEN TEE 28-12-14.gpx Open full screen  NB: Walkhighlands is not responsible for the accuracy of gpx files in users posts
The parking area was empty when we arrived. Another car came 10 minutes later with a couple of walkers also heading for Ben Tee. We set off first, climbing straight up the steep hillside. I expected the route to be pathless, but there is a faint path all the way. The first 100m of ascent are easy on grassy slopes. We scared off a few sheep and warmed up very quickly, though the temperature was well below zero. Below us, the mist lingered over Loch Lochy: 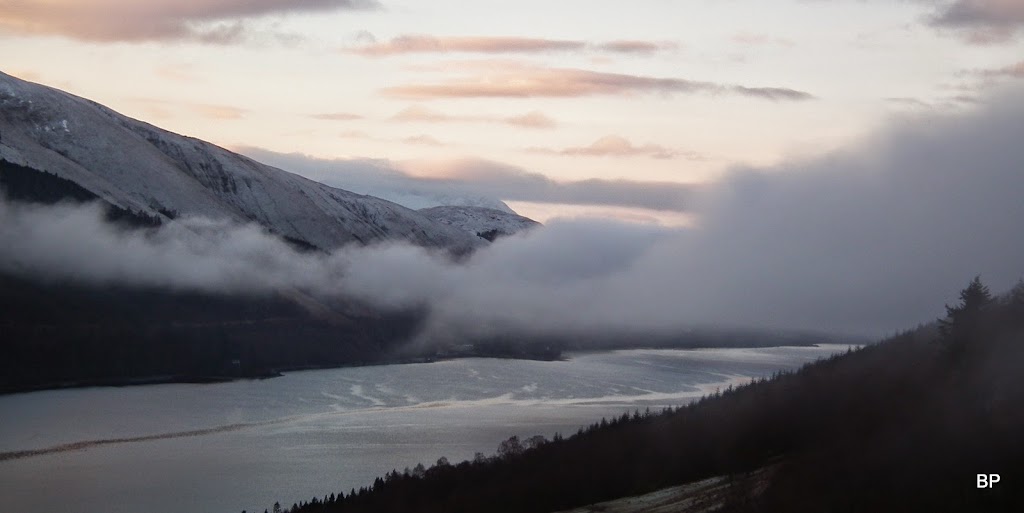 To start with, the views are restricted to Meall nan Dearcag and the slopes across the glen, but even that was interesting - I thought, a good day was shaping up! 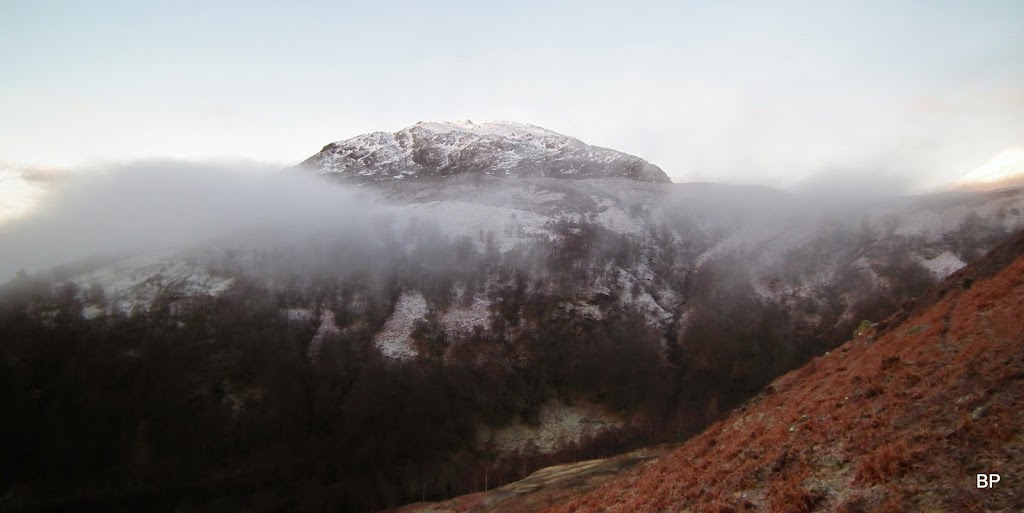 Higher up, the terrain was overgrown with knee-deep heather, but we managed to follow a tumbling path. In wet weather, this would be a very unpleasant experience, very boggy and unstable, but to our luck, the soil was frozen solid and we made a good progress. Soon we spotted "our" hill and I couldn't wait to lay my paws on the snow!

Great views down to Great Glen with some great shapes of fog: 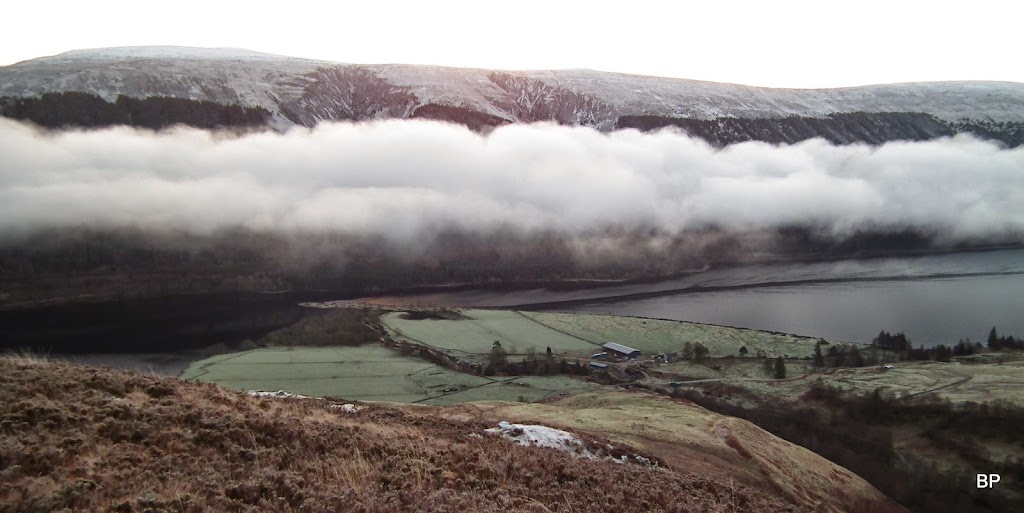 The slope eased off after about 200m of steep ascent and the path was now obvious, Ben Tee and Loch Lochy Munros dominated the view: 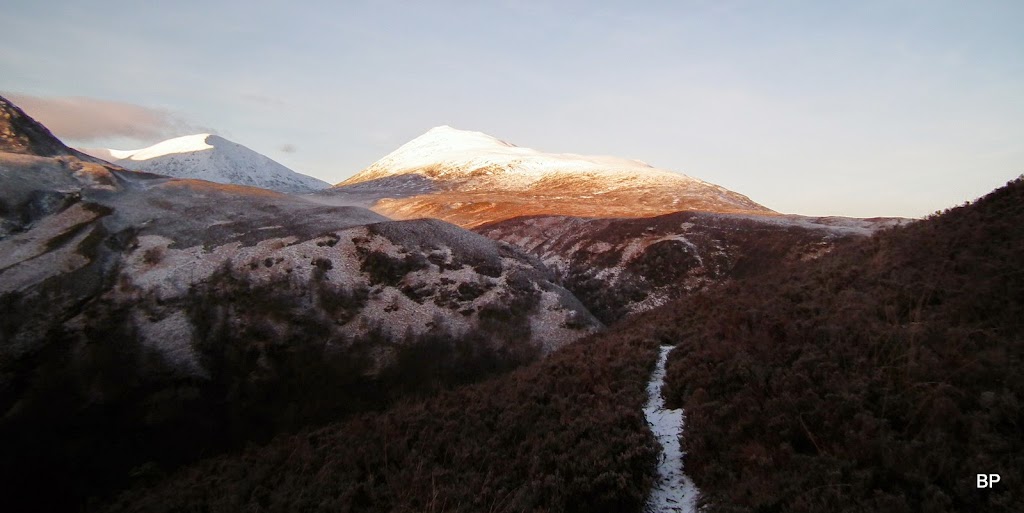 It was cold but quiet and I was glad we managed to fit in one more walk into 2014, with white hill tops around:

The mist in the glen behind us thickened, but just as well we were above the clag and could enjoy the morning sunshine 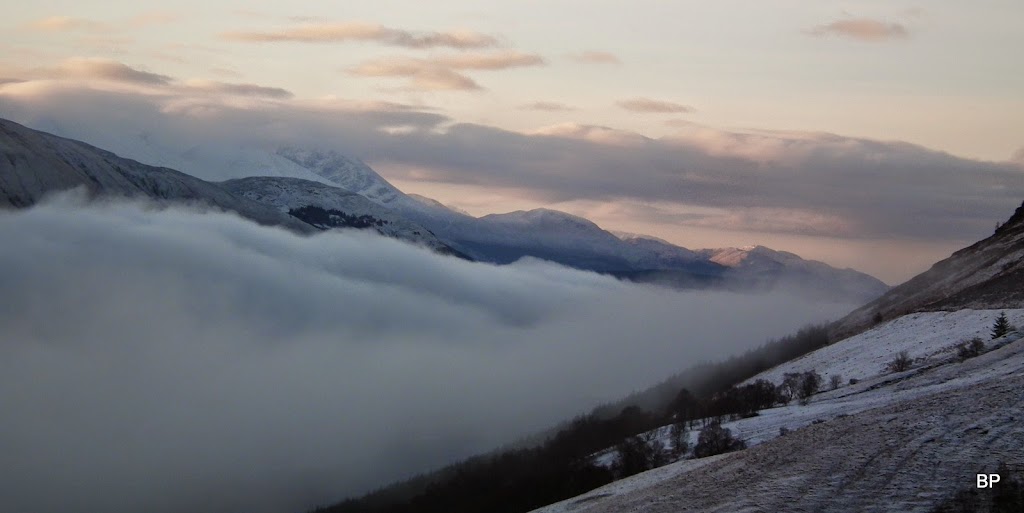 We stayed on the path even though it was quite muddy. It is obviously one of THESE hills - best attempted on a dry day or when the ground is frozen. The path follows the upper slopes of Kilfinnan Gorge until eventually leading to the broad eastern ridge of Ben Tee. But first we had to cross a deer fence. The stile mentioned in WH walk description is falling apart, we managed to scramble over the sad remains of the structure, but it may soon go completely and as the gate is padlocked, in the near future... it may be a full-on fence climbing task 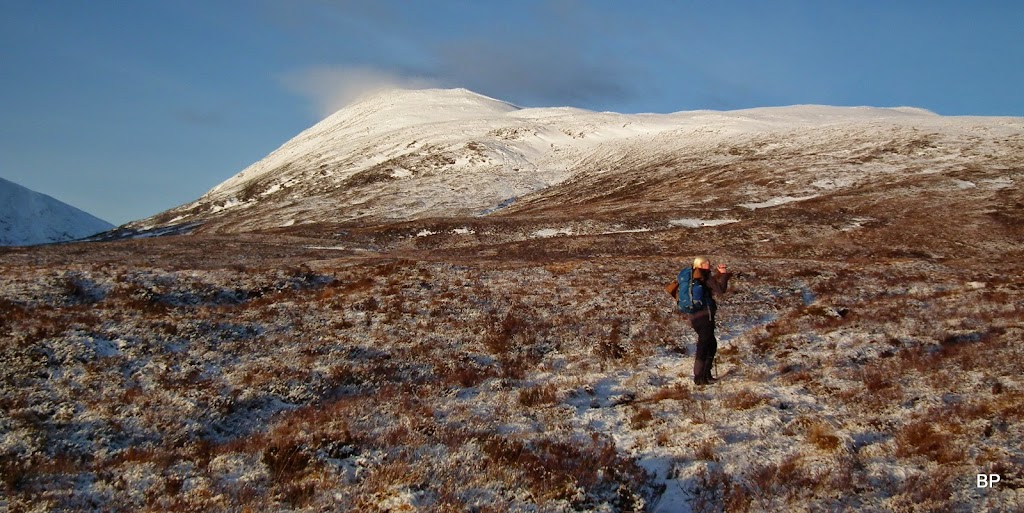 The family of Loch Lochy Munros:

Views opened up as we walked across the more even terrain. To the north-east, the Great Glen with mist lying low: 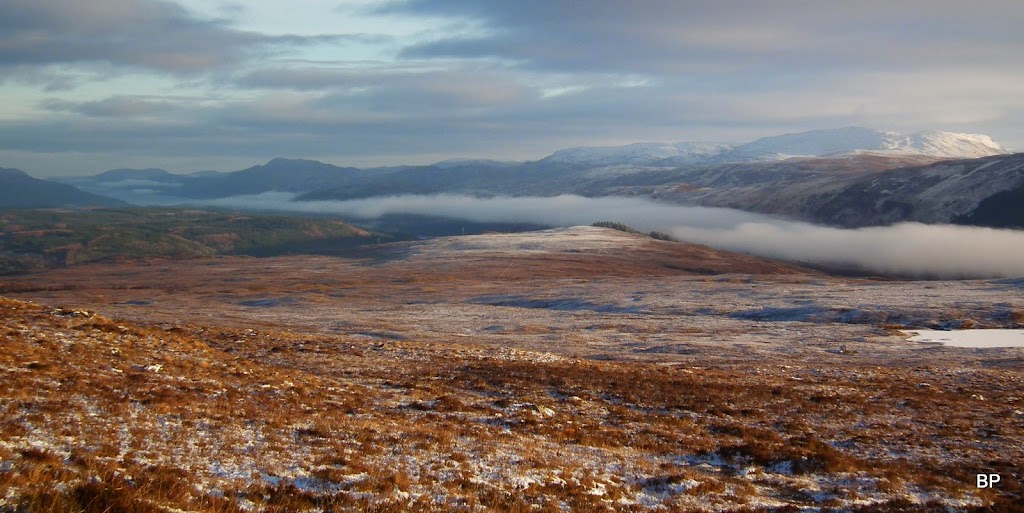 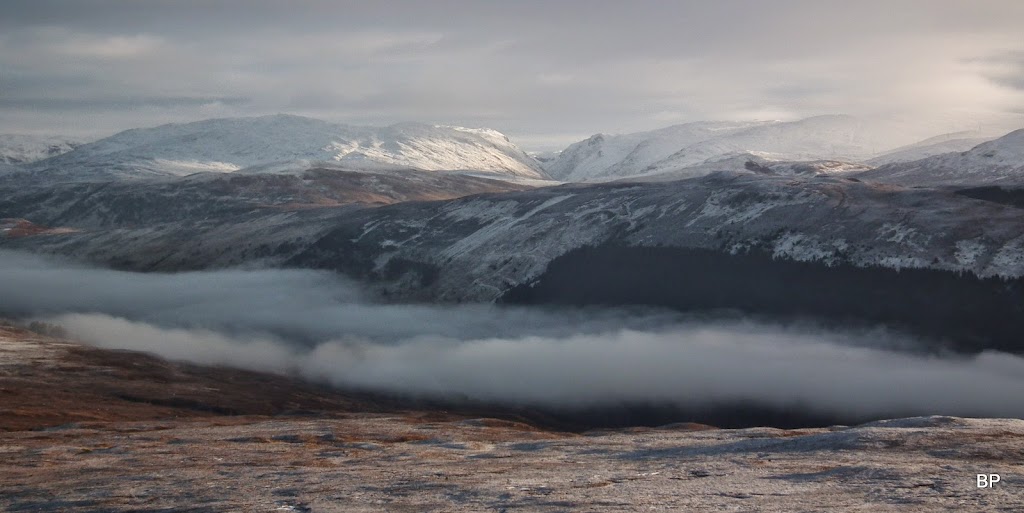 The two rocky gullies across the glen: 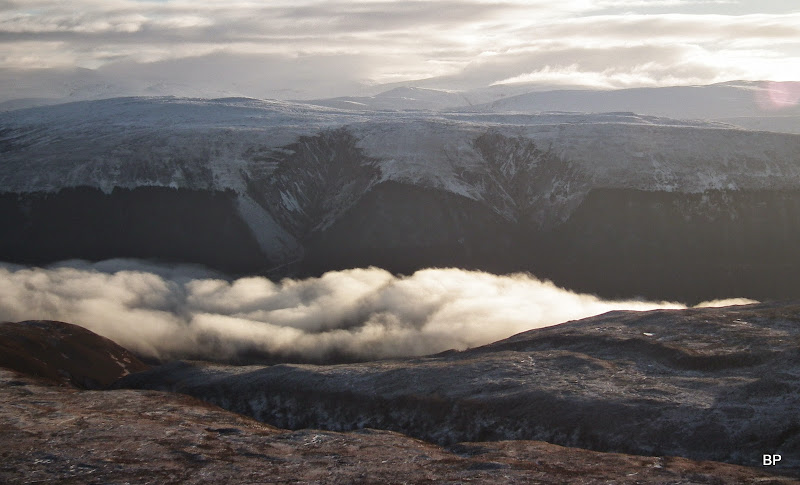 The path petered out when the ground steepened (or we simply couldn't find it under snow). We began the final steeper ascent, more heather, but also more snow. Something right up my street! 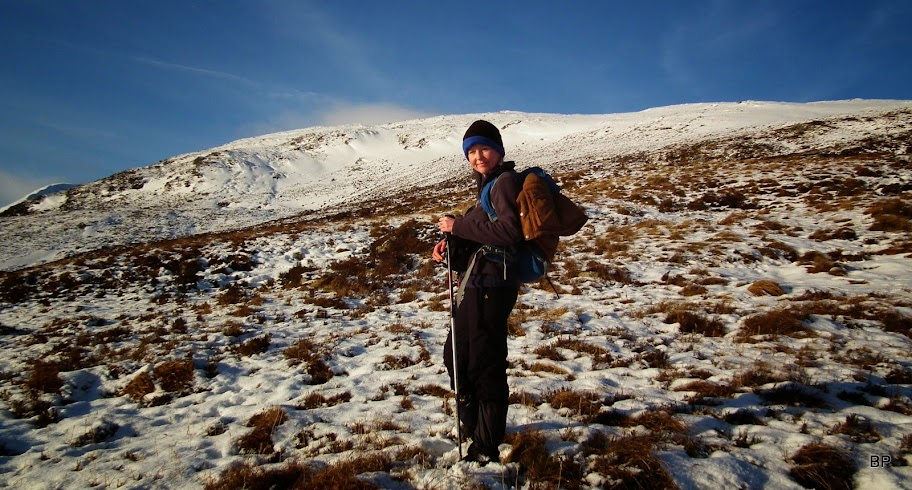 ) but the snow cover was so soft that spikes were not needed. Soon I found out I was sweating. Deep snow really makes for harder going, especially if there are no older footprints to follow. Good, good, more mince pies got burned! 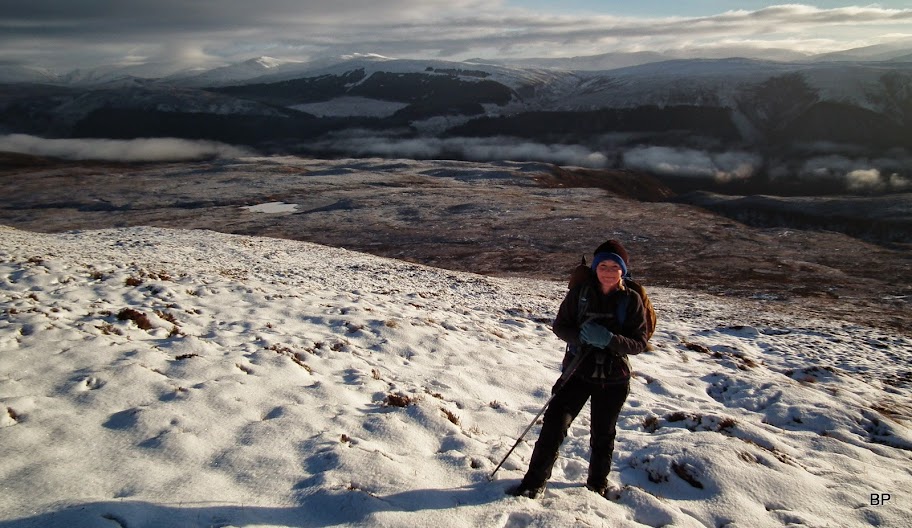 We entered the silent, white world... No sound apart from the crunching of snow under our feet and an occasional gust of wind. 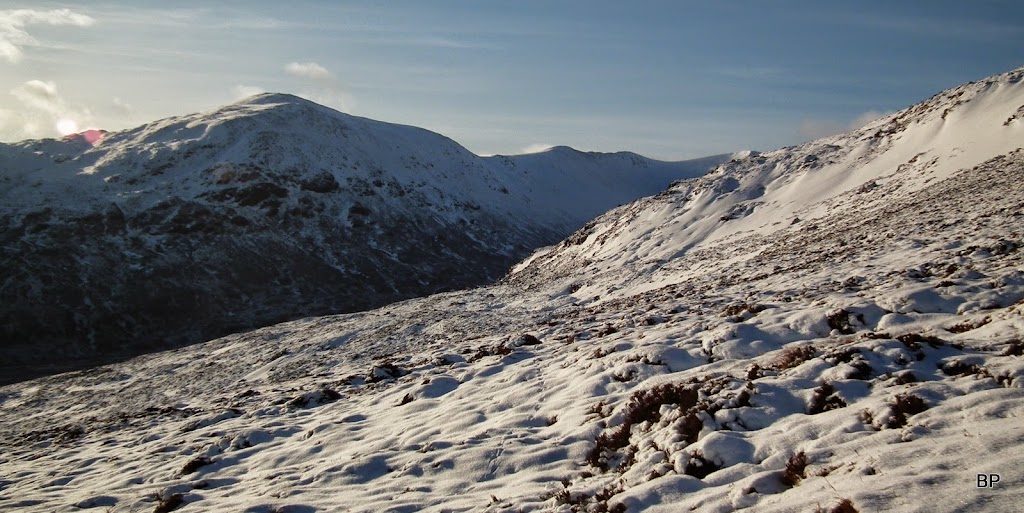 The cloud was coming in from the east but we didn't worry about not getting the summit views. We have already seen some nice panos and the snow experience was superb. I almost forgot how much fun it brings 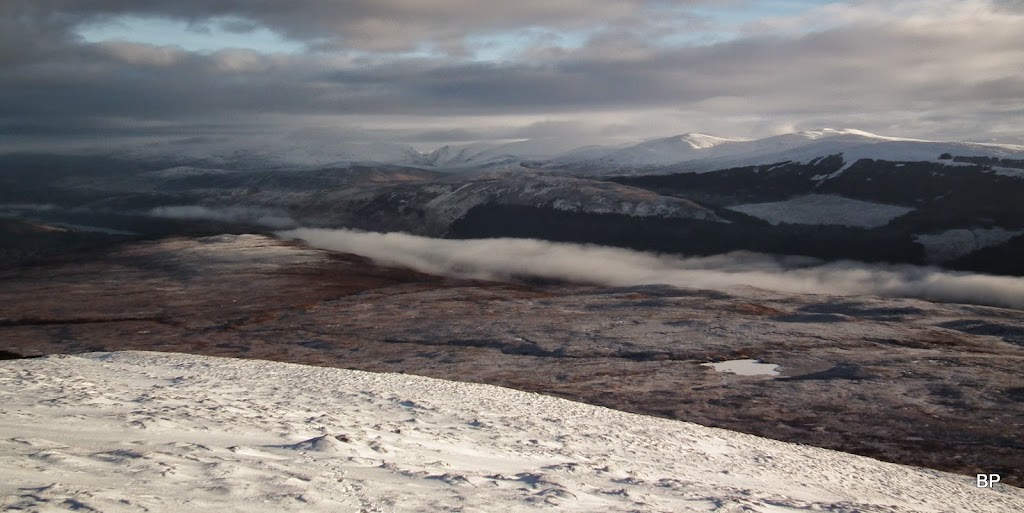 Due north, the windfarms of Meall Dubh:

We emerged on less steep section of the slope, we should see the summit from here, but well... We didn't exactly... 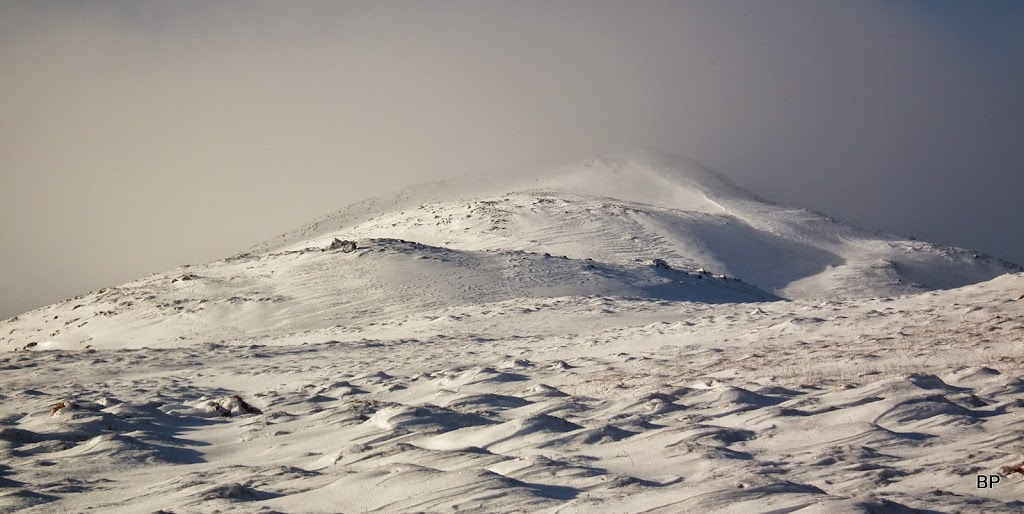 The snow was getting deeper and we swapped places, Kevin took the lead again. His was the harder workout, but even I got all sweaty when pulling my legs out of the snow. I wanted to stop to make a snowman (any excuse is good to take a break

) but my chum wouldn't let me. We had more than enough daylight left, but he wanted to stick to the schedule

So instead of a snowman, I had to be happy with...
...a snow monster casting shadow 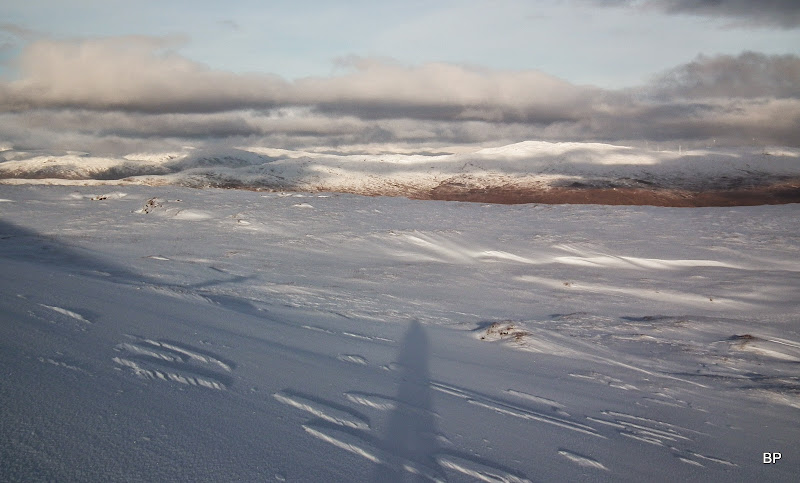 The top of Sean Mheall and the snowy slopes: 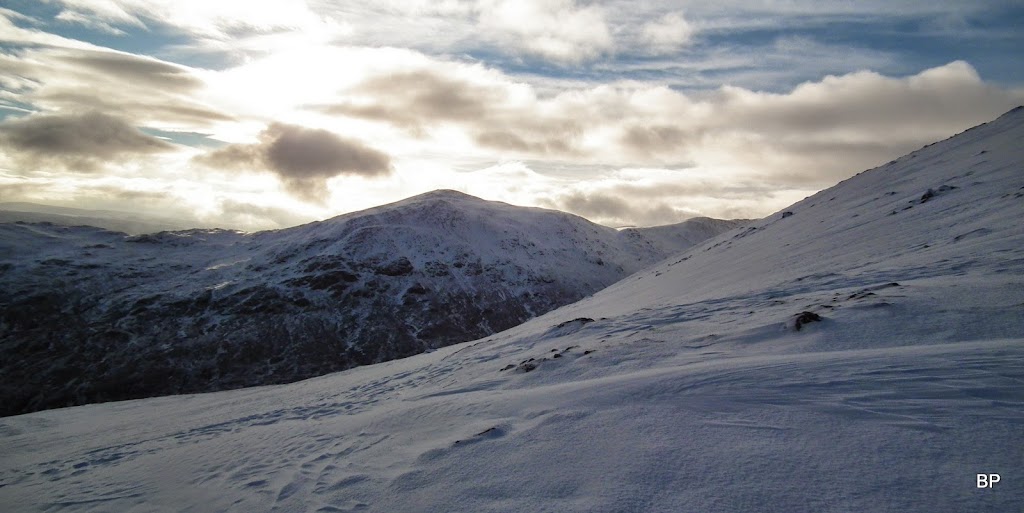 Somebody here is seriously enjoying himself!!! 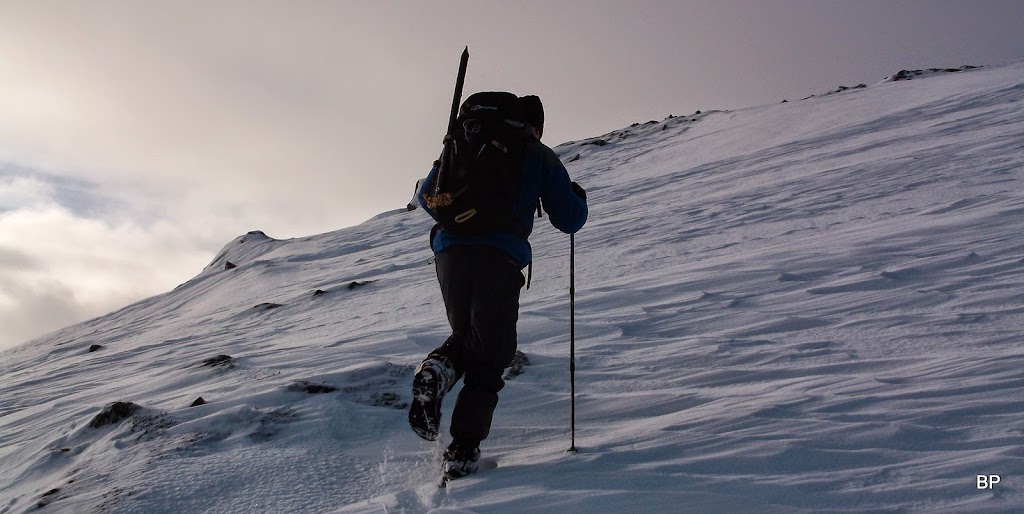 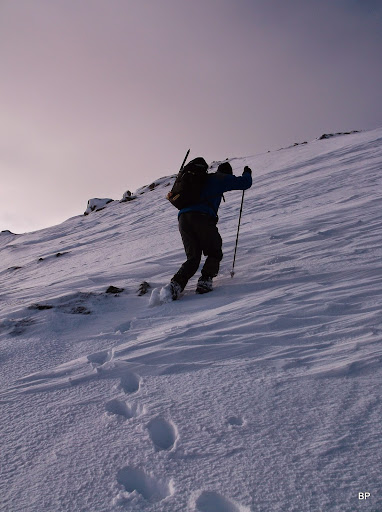 I was left behind taking photos and recording short vids, before we entered the cloud that covered the summit area. Navigation in mist especially on snow-covered slopes can be tricky, but the cloud was only down to about 850m and the climb is straightforward. It's supposed to be a bit rocky, but since we swam in knee deep snow, we didn't notice many rocks at all 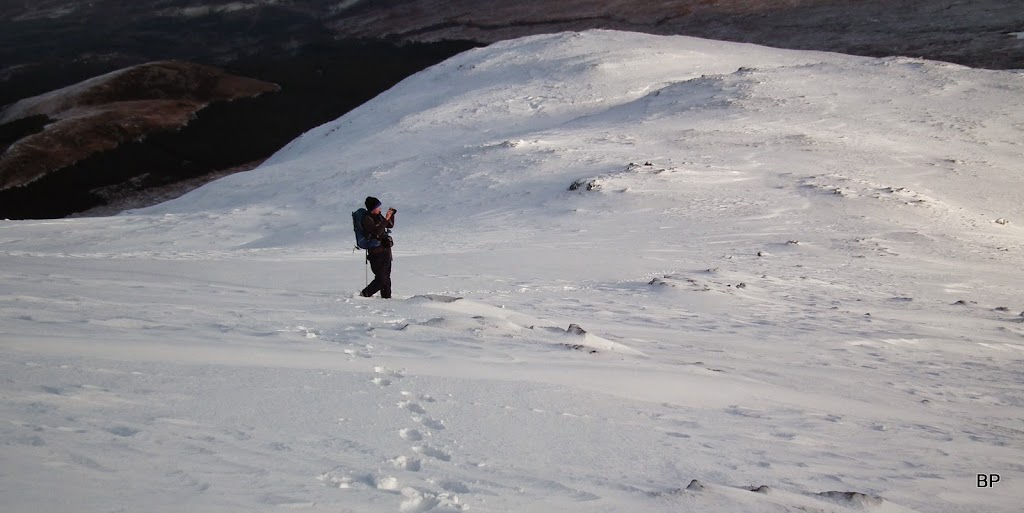 The final section was steep again and lots of the white stuff, but we kept giggling all the time - I felt like a heron in a pond. Two steps up, one step down, oops, here we go...
The summit area is small and I bet views must be cracking but all we saw was this: 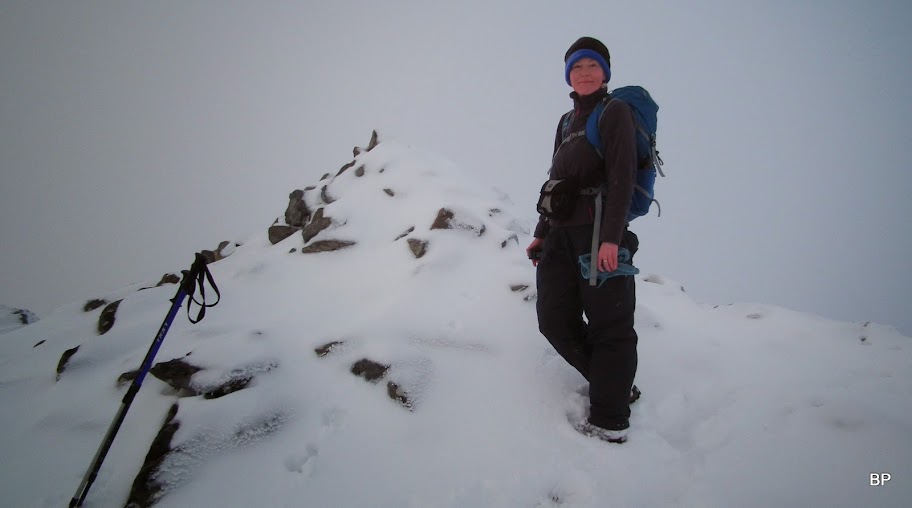 It was seriously cold on the summit and as we stopped moving, we were losing heat quickly. A hot drink and a snack were welcome. Cuppa tea on Ben Tee?
Lunchtime: 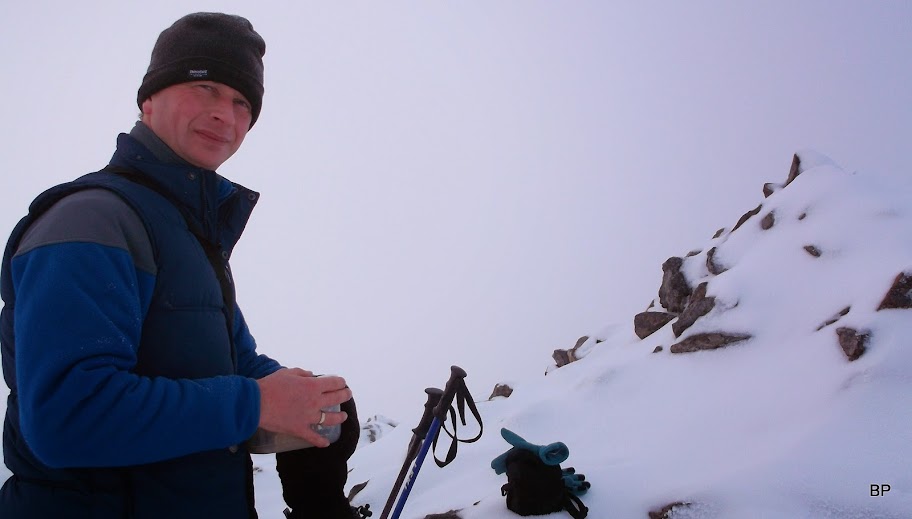 I hoped against the odds that the cloud will lift and we will be able to capture some views, so we waited for about 15 minutes, drinking tea and chewing whatever was thrown into Kevin's lunchbox, but our hopes were in vain. Eventually, as our hands were freezing off, we decided to leave. We will return to this hill for sure, as it is close to home and easy enough to become "a quickie in the neighbourhood"

Just below the summit we met the other couple, they were on their way up. Lucky them, they used our footprints all the way up

The descent was without any nasty adventures, going down the thick snow turned out much easier than trudging up. Of course, when we looked back up at the summit from lower levels, we saw that it had cleared briefly. Oh, how typical!
Two weird snow creatures: 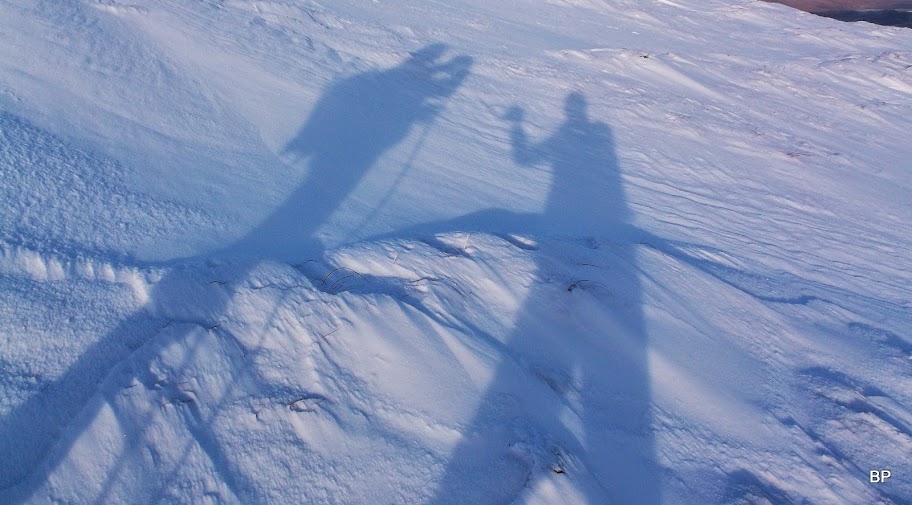 When we returned to the parking area, we spotted a sheep trying to... eat our car! This one must be a lover of Japanese cuisine

All in all, a day well spent. Even without the summit panoramas, we really enjoyed this short jaunt up to the height of 900m and back. And hot tea tasted lovely on the summit of Ben Tee. Meow!

Weather forecast for the New Year weekend was gloomy and we didn't have great expectations, but eventually we climbed two more hills on the first weekend of January and officially opened the new 2015 season. Reports will follow soon

Enjoyed reading that - probably more than I would have done doing it this weather!

Nice one BP, nice trip for you both to break in the new beets

Hi BP - I remember you said on an earlier post that you were saving this one for the winter - looked like a good decision.

A good way to end 2014! I love the pictures with the mist down in the glen. Very atmospheric!

Great photos and an enticing description of this hill, thanks

A good read with some great photos. Thanks for sharing