First two Munros of the year for me and thoroughly enjoyable too. Glen Affric put on a show for the drive up, Loch Beinn a'Mheadoin was like glass reflecting the occasional patches of blue sky, glimpses of sunlight, bright green foliage and most of all large fluffy clouds of low mist.
We set off at about 9:30am and the sky ahead looked pretty murky: The good surface soon faded into a bog which we managed to navigate safely (i.e. I stayed on my feet) then crossed a couple of streams and headed right up the side of the Allt Toll Easa. It was quite steep up this section so stopped to take photograph 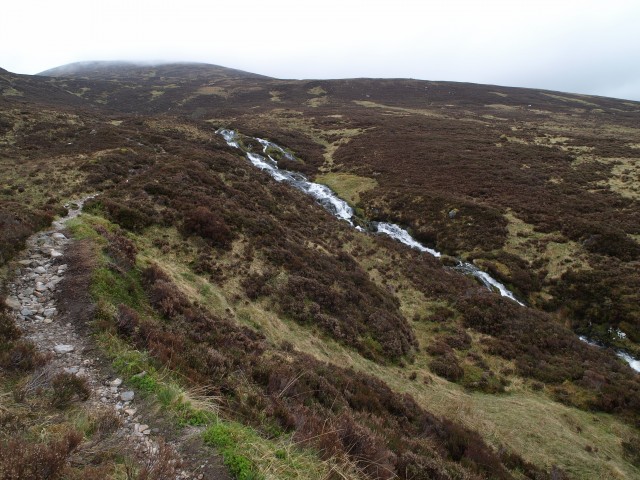 Having wimped out of the more difficult option of heading up to the south end of the ridge (looked like a lot of snow up there) we decided to stick with following the stream. The path seems to switch back and forward across the stream for a while and we missed at least one of these switches ending up in another boggy place, but soon we were at the Bealach Toll Easa among the waves of mist rolling in from the Mullardoch side. 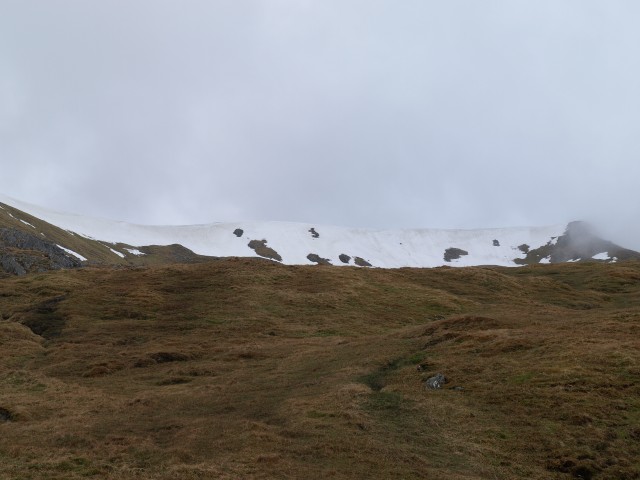 At last the target came into view 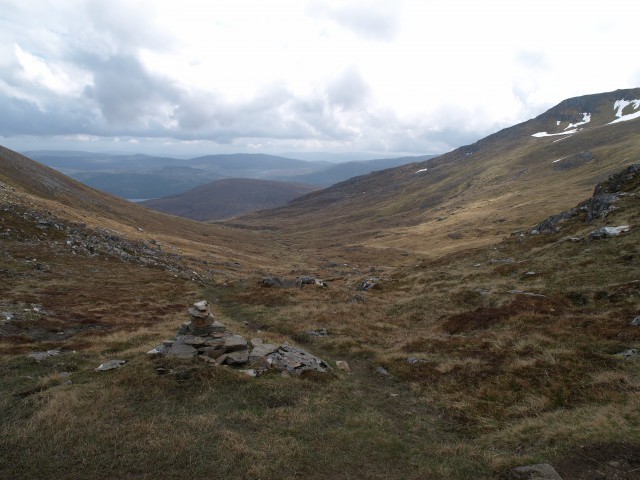 From the Bealach looking back the way we came up.

The route ahead looked challenging enough and made us glad we hadn't gone for the 'difficult' option. 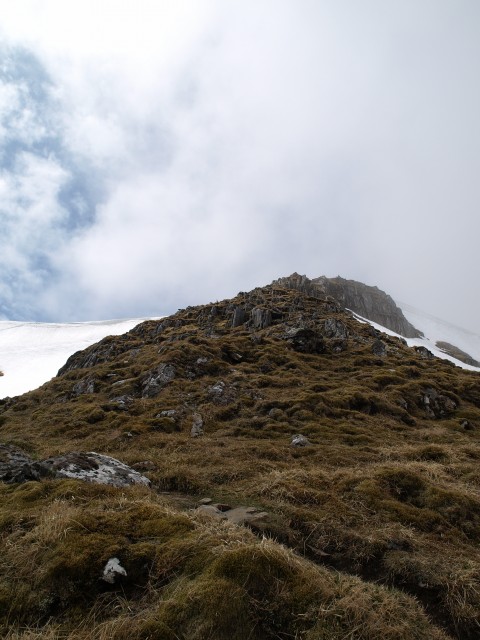 This looked like it was going to get 'hands-on', but at least it was the easy option! 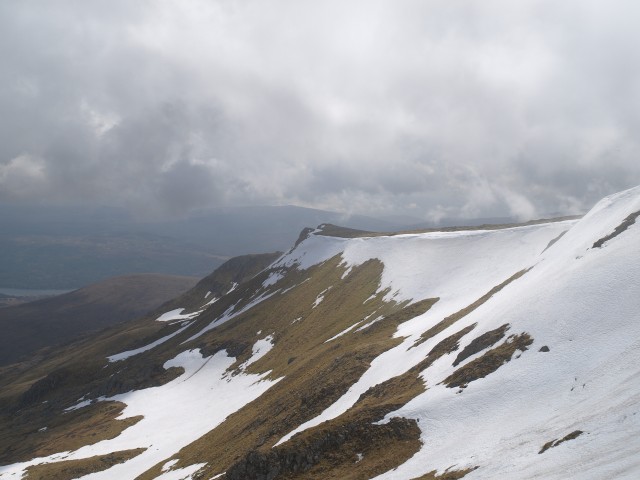 Bumped int 2 very nice couples at the summit who had come up the 'difficult' and said it wasn't difficult, one couple were heading to Carn Eige the others were off to Toll Creagach like us. It was very misty at the top, but there was a view back along the ridge that showed the Allt Toll Easa and Loch Beinn a'Mheadhoin. 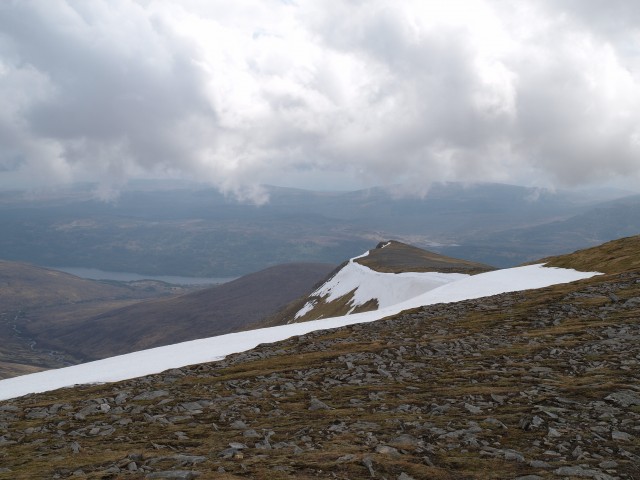 The view south from the summit of Tom a' Choinich

Then it was back down to Bealach for target number 2 of the day - still hiding in the low cloud: 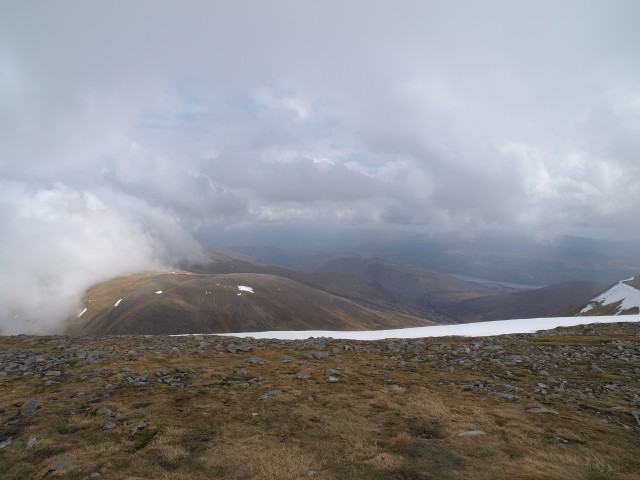 It is a bit of a 'trudge' up to Toll Creagach and I was wishing the west top was the real summit, but the cloud began to break up and the views down to Loch Mullardoch and across to the Mullardoch Munros made it worthwhile 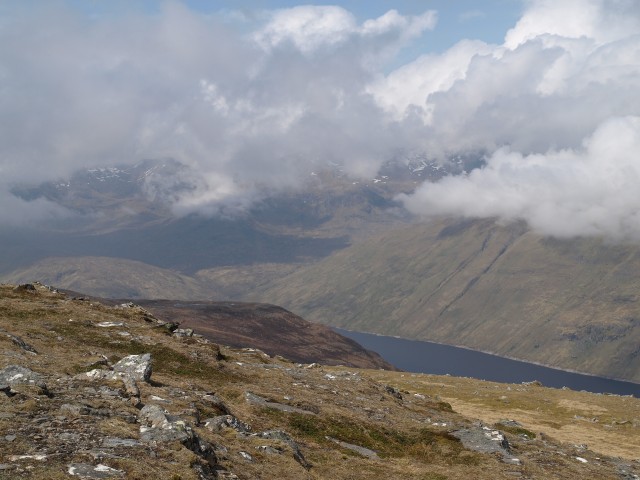 The afore mentioned couple joined us at the summit and told the tale of their day on the Mullardoch Munros accompanied by 2 ladies one of 71 and the other 74 who were just coming to the end of bagging all the Munros! The tale was made even more entertaining by a quote from the gentleman (I wish I had asked his name) who said "the most scared he has ever been on a mountain walk was on the boat going up Loch Mullardoch!" 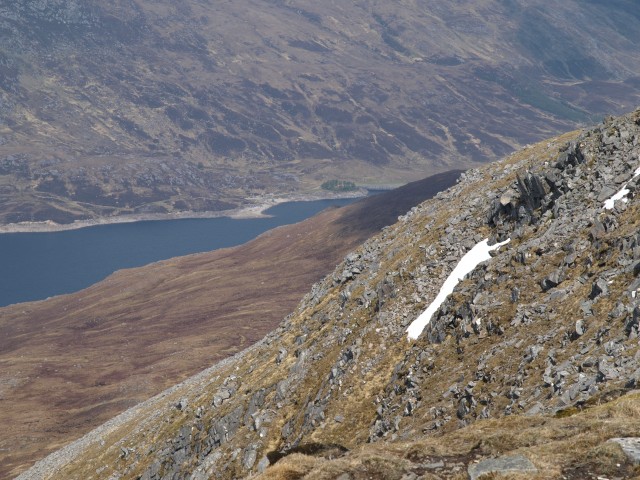 The Dam and the lodge at Mullardoch

All that left was to get off the hill and get back to the car - easy?
No
We headed due south as indicated on the route, but didn't like the look of the drop down so skirted around the hill (Beinn Eun) to the east - mistake; it was very craggy round there. So what did we do, yes carried on. Eventually picking a messy route down to a track in the glen between Beinn Eun and Beinn a'Mheadhoin that lead to the original track in.
At this point we bumped into the couple (of Mullardoch Munros fame) who had followed the due south direction and had real difficulty getting down - so be warned it is very steep and covered in rock and heather roots. 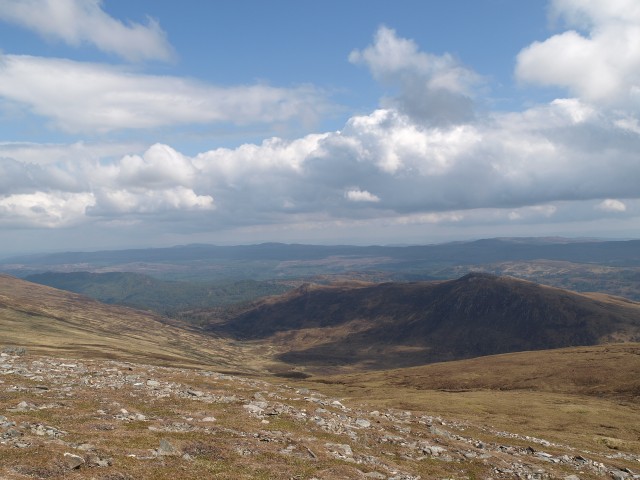 Beinn a'Mheadhoin before encountering the precipice :-) 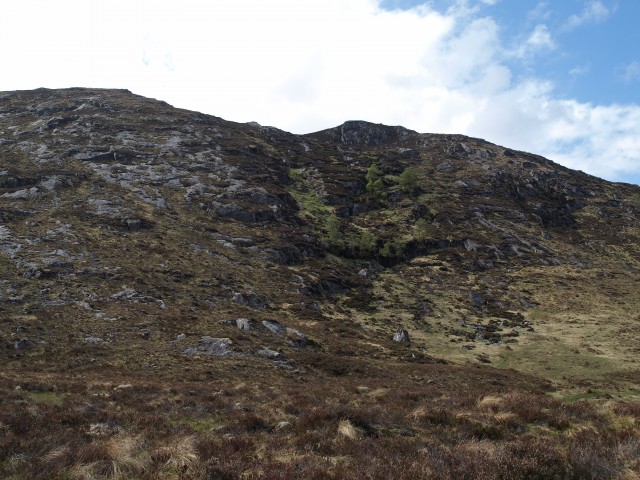 Looking back at the last part of the awkward descent

A chance for a quick look back at the two hills of the day: 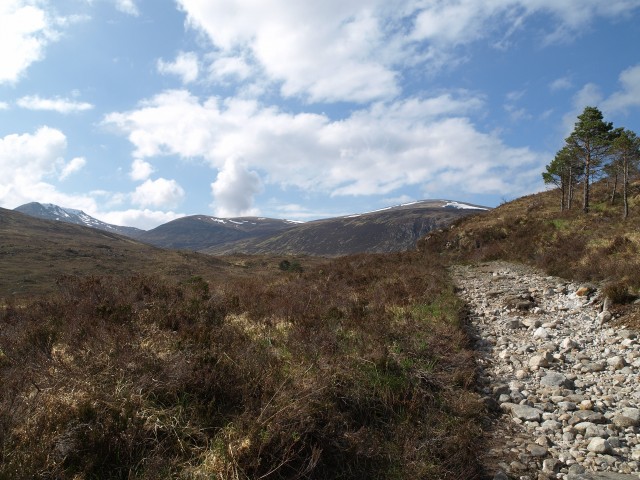 It took a long time to get off that hill and it was about 5pm when we got to the car, but a great day out on two good hills, the second one being 'spiced up' by the descent!
Where shall we go next?

I think Tom a'Choinich is a great hill with awesome views out West and the lure of that fantastic ridge walk to Carn Eige, which I highly recommend... even longer day that one though.
Toll Creagach on the other hand I found so uninspiring unless you approach it from its eastern end... a lot kinder on the knees too, however that too does make your day longer.

Cheers for that detailed report. I'm planning on heading this way soon so your info is very useful