I planned to do some of the eastern mamores from a base in Kinlochleven and had a look at Skillinabottle's report may 2010. However a 4 munro walk sounded like too much for my dodgy knees.
I have always been a fan of Ralph Storer's "100 best routes" and his guide included Binnein Mor and Na Gruagaichean in a notional 6.5 hour walk-that sounded more like it.
With the weather looking excellent i drove up and set off at midday having parked in the car park for the Grey Mare's Tail in Kinlochleven.
Its a glorious start , initially walking through birch then beech and oak forest. [I was following the red markers though ignore the first one 20metres out of the car park.] This photo [faintly] shows the start of my intended descent by the stalker's path from Na Gruagaichean. It comes in from the right immediately to the right of the central birch sticking above the sky line. It then turns back acutely towards the three dobs of snow.
I made good progress on the dry path and started rounding the shoulder of Sgurr Eilde Begg which i intended to ascend.
However once Sgurr Eilde Mor burst into view , it looked so enticing that i decided to add this to my route.
Sadly none of my pictures did this view justice.
Below is a rather dark unwelcoming view of Binnein Beag from the lochan before i start the ascent on the right for Sgurr Eilde |Mor. As skillinabottle said , it gives plenty of scrambling oppurtunity on the way up , and a nice scree shoot on the way down.
Below is a view of the lochan from the top and shows in the top left corner the first zig of the ascent of Sgorr Eilde Beag that i ignored. This view on the start of the descent shows a sharp ridge which looked like a possible good ascent but i turned right for the scree. I wish i had worn my mini gaiters , as i had to stop twice to empty all the stones from my boots.
As i headed towards the col between Binnein Mor and Beag i got an interesting skyline view of 2 walkers in front of a sunlit Aonach Beag. 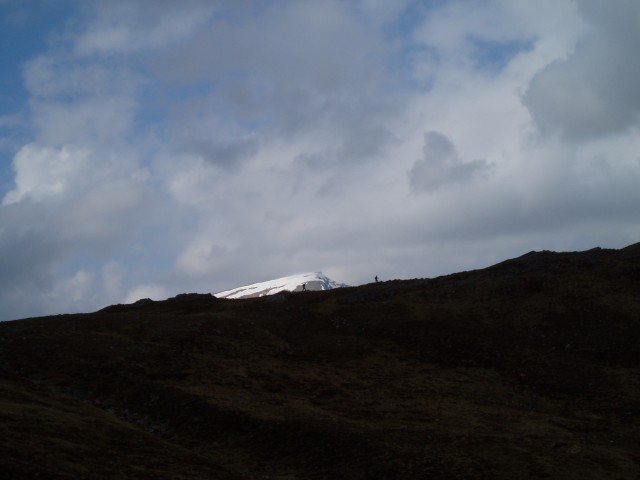 The path headed to the lochan between the two Binneins and i turned south west into the north facing coire of Bennien Mor. The path disappeared here but reappeared after i passed to the west of the two lochans higher up. The path surprisingly headed to the centre of the coire before turning acutely right to ascend to the north ridge.
I was aware of three walkers who were ahead of me and were scrambling up the north east ridge to my left, which i thought looked good.
However they decided to contour round to my position by crossing a snow field which looked a bit dodgy. This picture shows one walker in the middle of the snow and In front of the camera you can see the rim of cornice which has curved round.
The path headed straight for this rim about 10 metres from where it petered out.
I had tentatively tried kicking two snow steps here but decided it would be quicker to walk round the end of the cornice.
Bad move, as the grass within a few feet of the cornice was so wet and slippy that i had a wee sit down and got a wet bum.
Having watched my misadventure , the next chap correctly kicked in his snow steps and easily broached the cornice.
From here it was pleasant ascent up the sharpening ridge to the summit. The ridge coming up from the east reminded me of Sharp Edge on Blencathra in the Lake District.
Interestingly my uploaded GPX file incorrectly shows me having fallen several hundred metres down and back up here-maybe that's why the walk took so long!
The ridge now curved round to Na gruagaichean and the following photo shows the rocky defile north west of the main top which is part of the route. It was a very pleasant walk along this ridge and one doesn't seem to lose much height before ascending the last summit of the day.
Below is a view down to Kinlochleven with Mamore lodge the white building to the right of town. After soaking up the sun on the top , i descended north west down the rocky defile. The last 10feet of this was unpleasantly eroded and led to a safe but ungainly slither on loose soil. From here i could see the stalkers path below that i would eventually join.
However i decided not to head for it but to follow the classical route by pleasantly scrambling out of the defile [ you can easily avoid this] and then descending the north west ridge which took a lot of concentration as it was so slippy due to small pebbles and gravel. it was very dry and maybe less slippery normally.
I then turned left at the col onto the stalkers path which annoyingly climbed for some time before contouring round.This is a strange section of path which seems to be very indirect for no obvious reason.
In retrospect it would have been far better to descend directly from the rocky defile col.
Eventually you start heading for Kinlochleven again and its an easy route back to the start.

mamores 22may.gpx Open full screen  NB: Walkhighlands is not responsible for the accuracy of gpx files in users posts

Nice report ridgerunner. I done these from the falls of Steall last year. Some trmendous views in tour pictures bring back memories. well done.