The Plan
A group of friends and I set out to go hill walking while there was snow on the mountains.

Background
As a relatively inexperienced group, with myself having only 3 Wainwrights and 1 Munro to my name, we wanted a mountain that was relatively easy to climb, having wide paths (to avoid wandering off to our demise) and a route which we could easily navigate with limited map reading knowledge. Ben Lomond looked to fit that criteria with us choosing the route ascending up the South ridge, with a descent down the Ptarmigan ridge.

Getting There
We chose Saturday 17th January 2015 as the best day to attempt Ben Lomond with the help of the weather forecast website myweather2. The M8 to Glasgow, A82 to Balloch and the A811 to Drymen were slow going due to ice. Consequently we were worried that the B837 road leading from Drymen to the Ben Lomond Car Park at Rowardennan would be inaccessible. Luckily the road was passable, although there were a few steep gradients which could be a problem to non 4x4 vehicles in heavier snow and ice.

Rowardennan Car Park
There is plenty of parking at Rowardennan Car Park; run by Forestry Commission Scotland, it costs just £3 for the day. There are toilets, a picnic/BBQ area and a small pier to take in the views around the loch. Today there were only a handful of vehicles, presumably due to the sub zero temperatures and the poor road conditions. Setting off from the Car Park through the building's arch leads straight on to the Ben Lomond Hill Path. The path is a gentle gradient leading through the woods on the lower slopes, which goes through a few gates and over a small wooden bridge. Lower slopes still in the cloud.

The woods soon give way to open country and the gradient increased making for tougher going. The Snow was at least ankle deep all the way to the upper ridge, and although the GPS showed we were approximately on the path we were mainly following the footprints of the people that had gone before us. Upper slopes emerging from the cloud.

The summit of Ben Lomond is hidden from view when on the lower slopes, and as we reached Sron Aonaich we honestly thought we were near the summit. Then we realized the large white mass in front of us wasn't a cloud but the rest of our ascent.

The ascent to the upper slopes is very steep; and in the now knee deep snow and lack of obvious path, it was now time to dig deep and push for the summit. The ridge line leading to the summit of Ben Lomond runs round to the West with spectacular views in all directions, and a substantial drop on the North side. View along the ridge, with the summit on the final peak. Half way along the ridge. View from the summit.

Panoramic view from the summit.

At the summit we spoke to several other hill walkers with regards to the descent. The general consensus was to go back via the South ridge, as the Ptarmigan ridge was just too dangerous for the conditions on the day. Judging by the absence of footprints on the Ptarmigan ridge, I'd say no one had attempted it that day. View of the ridge from the summit. Descent along the ridge. 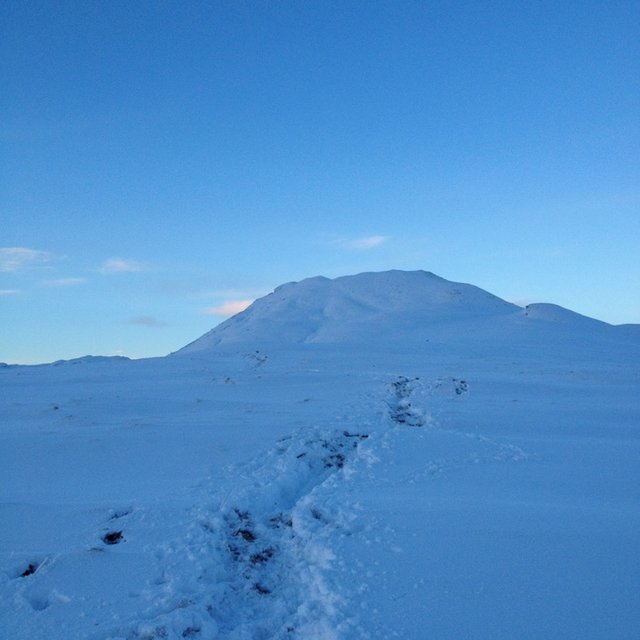 View back up to the summit.

I imagine you would normally have to watch where you place your feet during normal conditions. However, with the soft snow allowing our tired legs to let gravity do it's work, the descent was pleasantly quick.


Ben Lomond 17JAN2015.gpx Open full screen  NB: Walkhighlands is not responsible for the accuracy of gpx files in users posts
The route we ended up taking. The straight line on the upper slope is where we decided to slide down on our backsides, not particularly safe, but definitely fun.

Conclusion
The Ptarmigan ridge looks best suited to those with more experience of walking in the snow. Walking to the summit of Ben Lomond, via the South ridge is a great route to take in the snow, being easy to follow, with outstanding views of the surrounding mountains in the Loch Lomond and The Trossachs National Park.

Stupendous - one of the best of Ben Lomond.

Great that you got the views.

Well worth the drive up!

Your views of the ridge are sensational with the snow and blue sky. This was my first Munro 53 years ago so it's time to get back up there!

We have crampons and ice axes but no experience in using it. We have already made some moutain walking but in summer, so it would be nice if other walker wanted to join us

thank you for yours answers and hoping to see you there !