I sat down, wrote my TR, it took some time and now, when I was about to post it, I was LOGGED OUT and lost all my work. Usually I save parts of my TRs in drafts, but didn't do it this time. GRRRRRRRRRHHHHHH!!!!!

OK, let's start all over again and this time, as I've already lost my patience, I'm not going to elaborate for too long

This is the third from my backlog reports on Christmas/New Year, concerning a nice Corbett with one of the best panoramas in Scotland. So much has been already posted and written about Beinn a'Chrulaiste that I don't see much point to repeat it all once again. Just a short statement:
WELL WORTH DOING

Most of us, hillwalkers, have so called "to-do lists", where we write down mountains we would like to climb shortly. Of course, I have one as well, like all mountain mad Panthers...

From my own experience: even if I make to-do list for the year to come, I always end up doing something else instead

Like in 2014, I planned Ullapool Beinn Dearg and South Glen Shiel Ridge, ended up climbing The Grey Corries and Seana Bhraigh

Not that I regret changing my plans, at the end of the day it doesn't really matter which hills I climb as long as I doooooooo climb them

Beinn a'Chrulaiste was one of hills from "to-do in winter conditions" list, mainly because of its position opposite the big Glen Coe mountains. I first had the idea when sitting on the summit of Stob Coire Raineach last year, I thought - that lower hill across the glen must be a mind-boggling viewpoint!
My previous two climbs, Ben Tee and Biod an Fhithich, were both taken from the very same list and so was the one that came the day after Beinn a'Chrulaiste, so I could say that I'm working my way through that list pretty quickly

Our route was not very adventurous, the fastest way up and down the western side of the hill:

Track_BEINN A CHRULAIST 03-01-15.gpx Open full screen  NB: Walkhighlands is not responsible for the accuracy of gpx files in users posts
We parked in Altnafeidh, next to the famous view to the Big Buachaille. I have never been to Glen Coe in winter, so I was mesmerized from the very beginning: 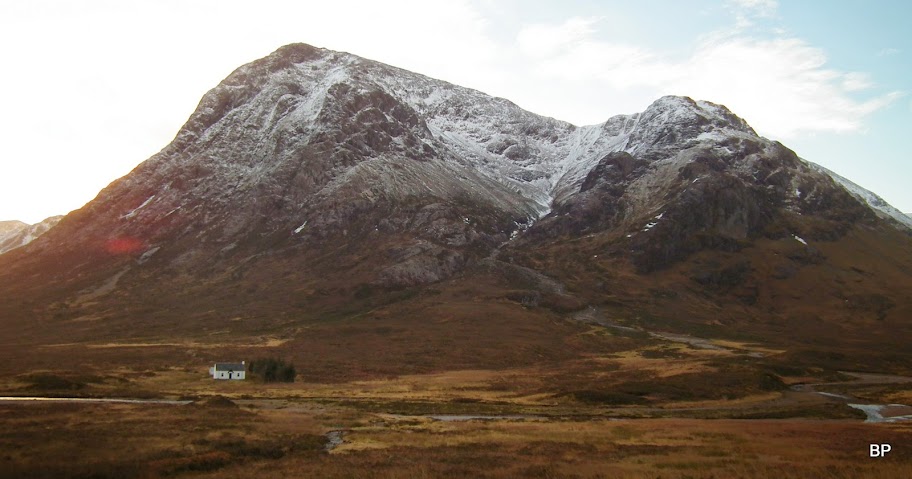 The way to the summit is up that slope. It may look intimidating... 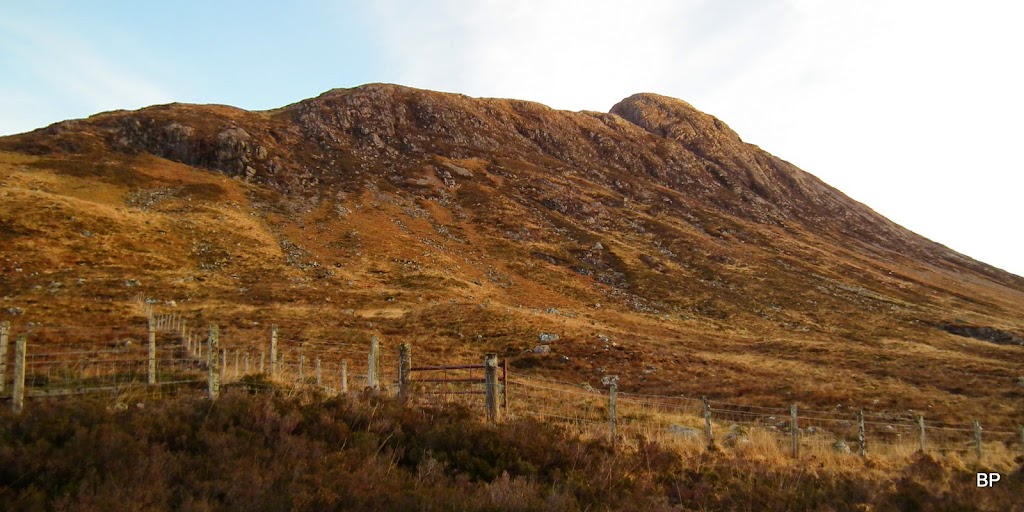 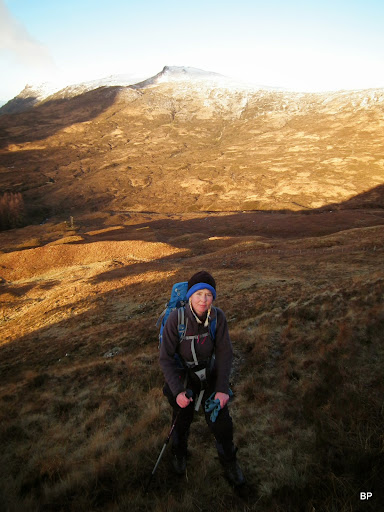 ...but the effort is rewarded when a great panorama opens up to the east and south, with Buachaille Etive Beag in the centre and Bidean ridge behind:

Zooms to the snow covered rocky ridges, with blue sky in the background... There's no place like mountains in winter! 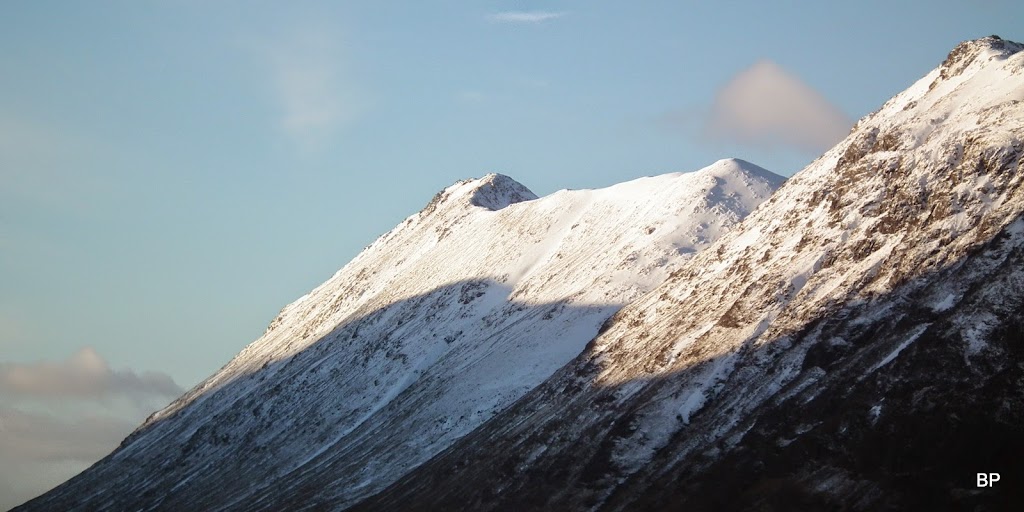 But of course The North Face is the one that drags most attention... 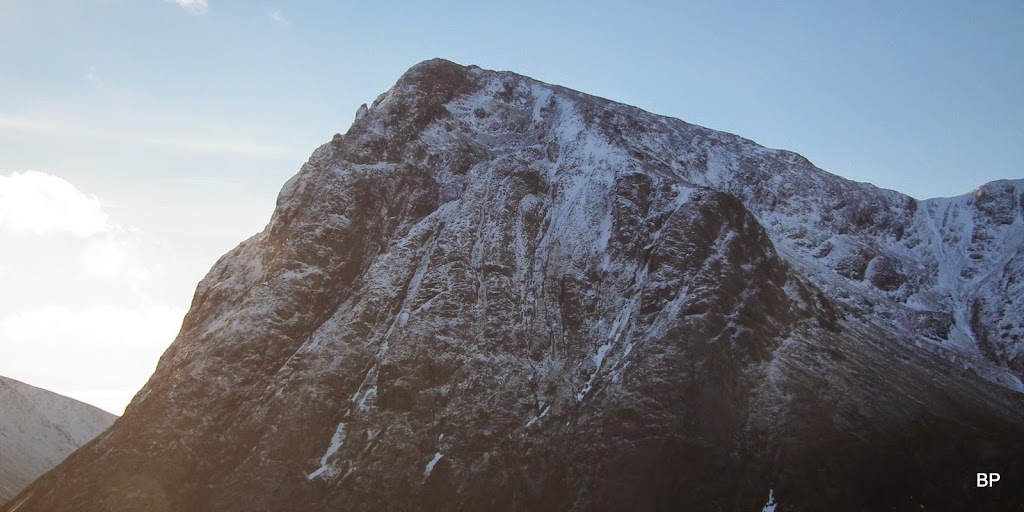 To start with, we followed a sketchy path, but as it was more like a half-frozen stream, we decided to ditch it and simply aimed for the lower top, Stob Beinn a'Chrulaiste, staying slightly to the left, to avoid a few crags. I kept glancing towards the Big Shepherd, but at some point the northern panorama became more prominent and I was gobsmacked again, just looking at these white-white shapes...
The Easains: 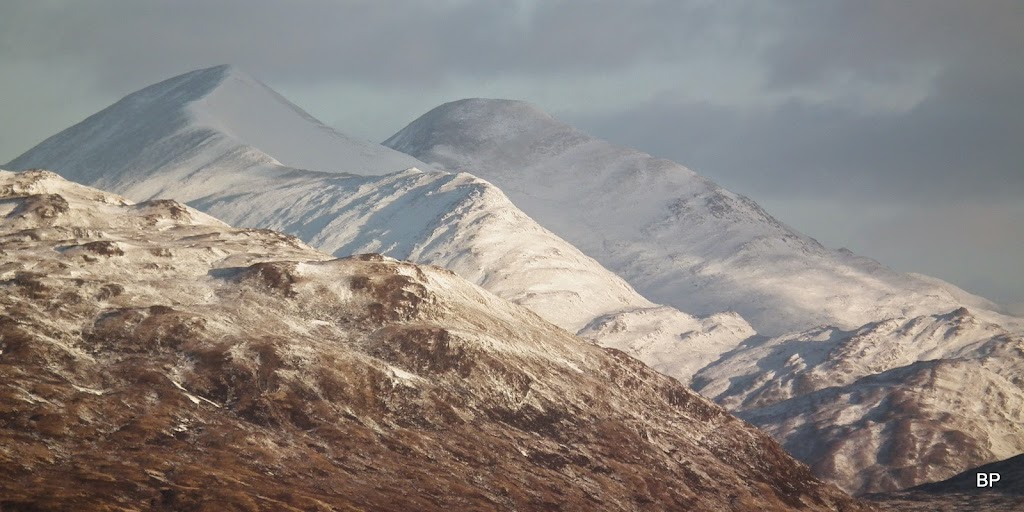 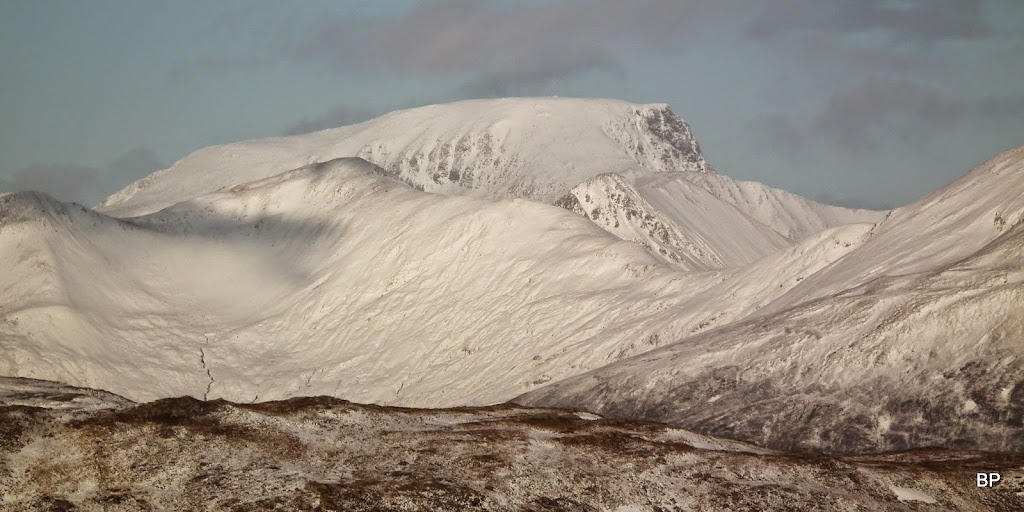 A wider panorama with Stob Ban to the left:

The Mamores in their full, winter glory: 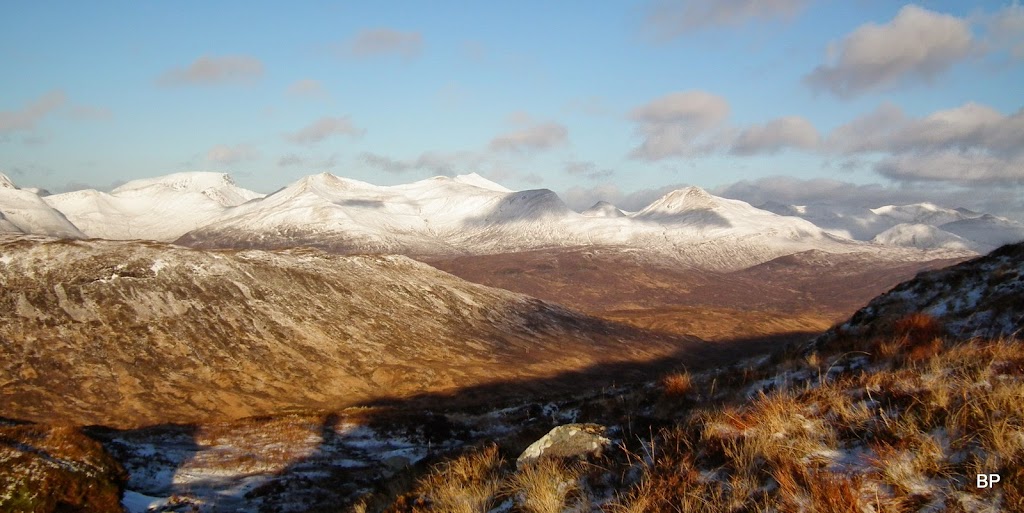 We stopped by a big solitary boulder just next to the top of Stob Beinn a'Chrulaiste. We were in the snow zone now and walking was much easier, at least no squelchy bog under our feet! It was cold, though... 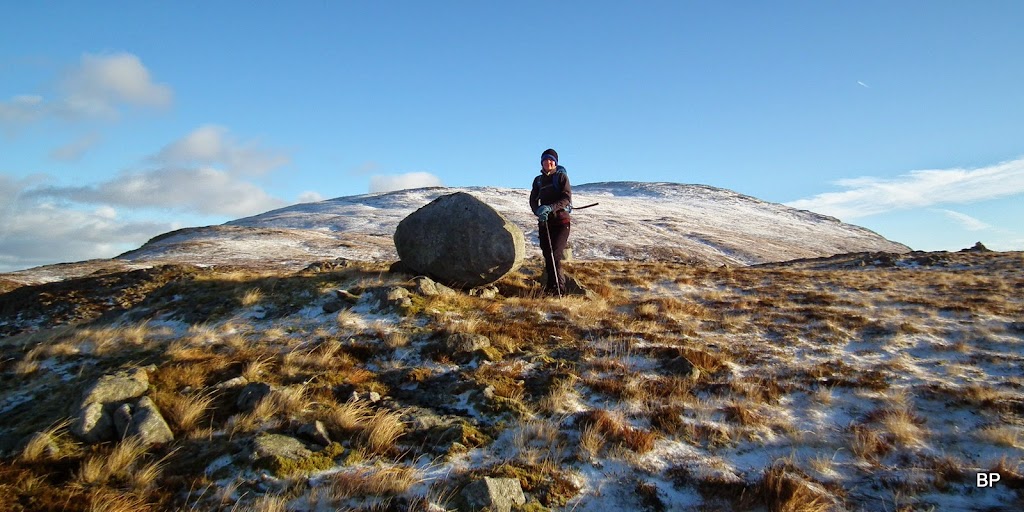 ...and taking photos proved a bit of a challenge 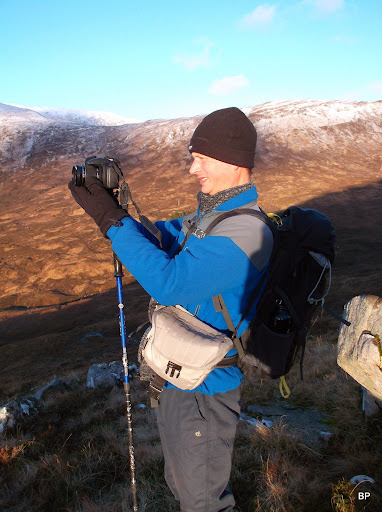 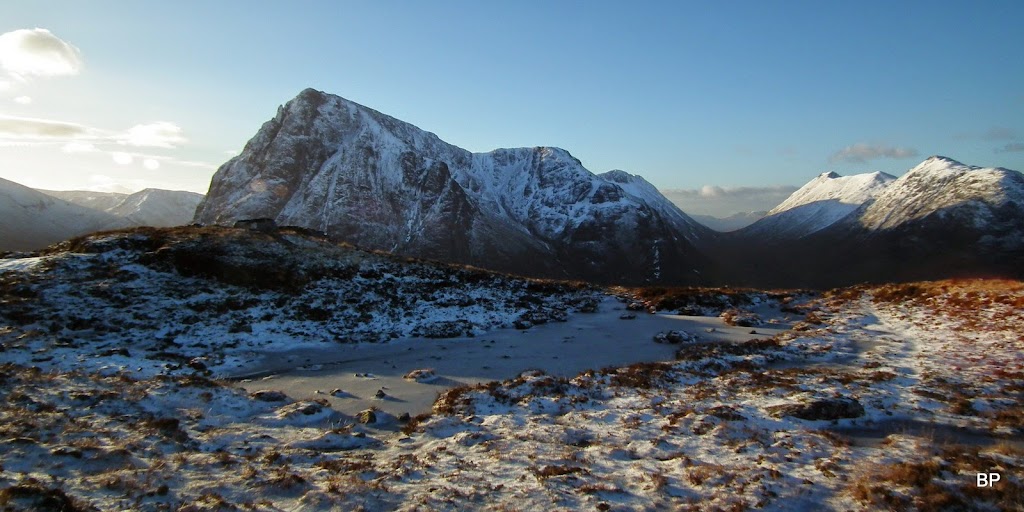 Zoom to the upper part of Coire na Tulaich, the easiest way up Buachaille Etive Mor. Looks horribly steep from this angle, hard to believe that I climbed it and found it easy 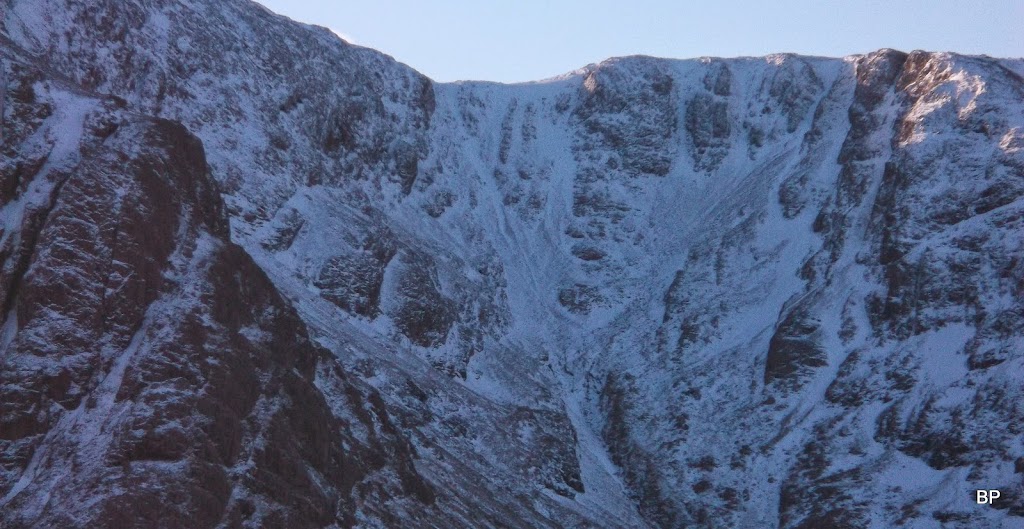 I changed the batteries for fresh ones (charged only the day before!) but after taking ONE photo they went flat, too. Obviously, my pocket camera does not like low temperatures. Luckily, Kevin's Finepix is more cold-resistant and it takes much better photos, anyway.
So with the backup camera gone, I could just stand and gaze at the marvellous views around while my chum was working

The last picture I managed to take, showing the eastern end of the Mamores:

We continued climbing up the slope which was much less steep now and covered in a nice layer of fresh snow. The wind picked up and the temperature was well below zero, but I couldn't resist striking a pose with such a fantastic background view 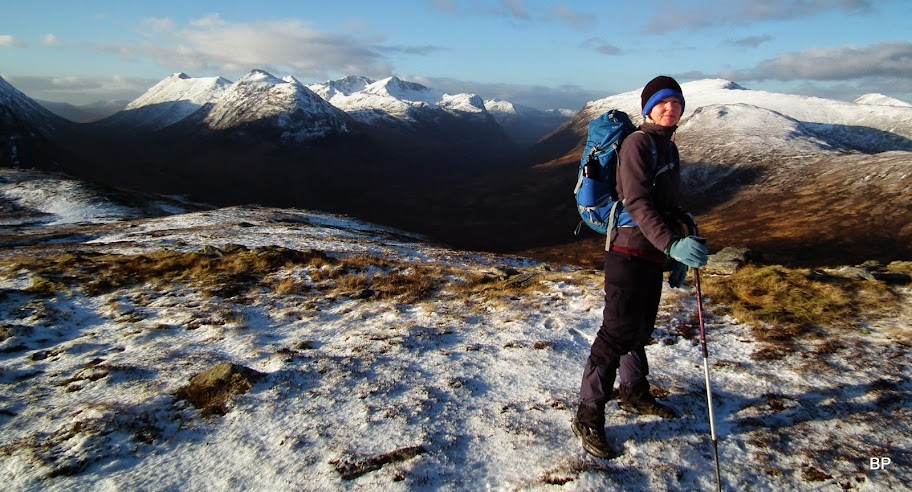 The final 50m of ascent were a bit rocky, with some ice but no spikes were needed. When we emerged on the summit area, it became obvious why this Corbett is widely considered as first class viewpoint! Simply stunning, especially in winter conditions. If the climb itself was uneventful, the wintry spectacle around us was amazing!
The summit cairn and the Grampians on the eastern horizon: 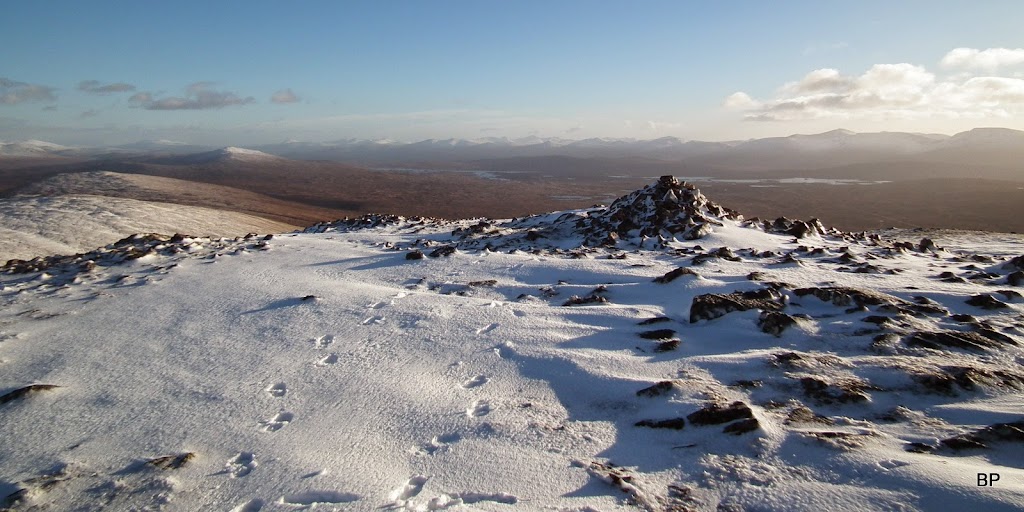 Blackwater Reservoir and the mountains beyond: 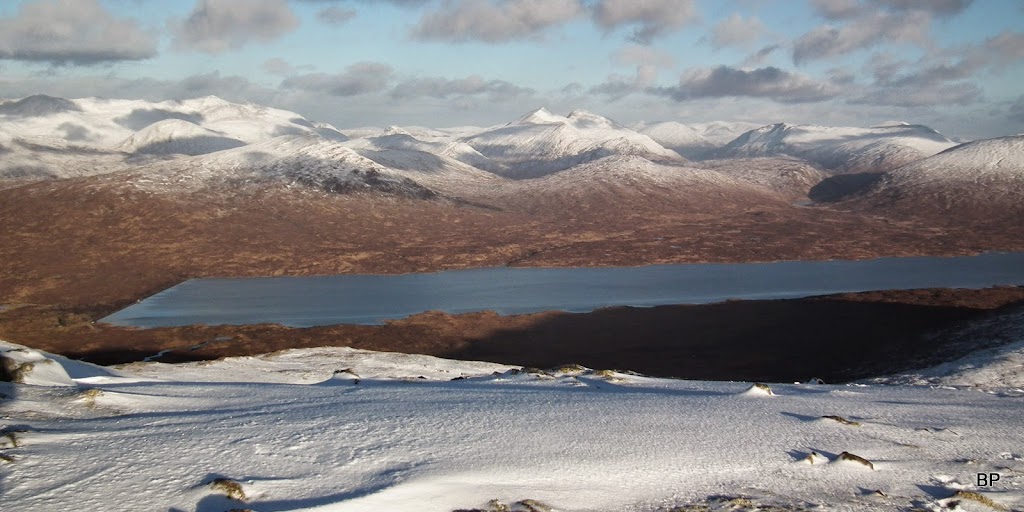 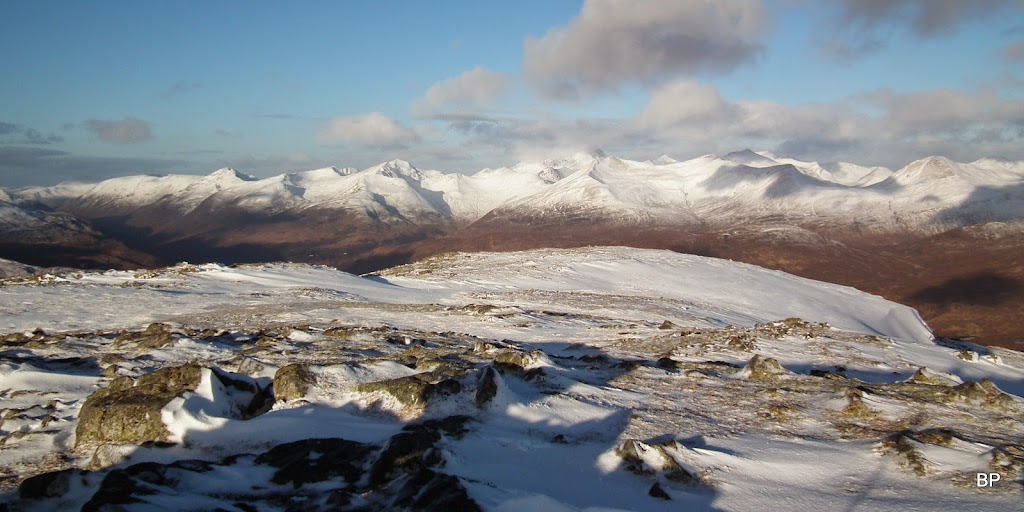 ...and of course the Glen Coe hills, so close, so dramatic, so beautiful:

Due south, there is The North Face:

Another photo from a different spot. We wandered around the summit, we had to stay on the move to keep warm - it was verrrry cold now and quite windy: 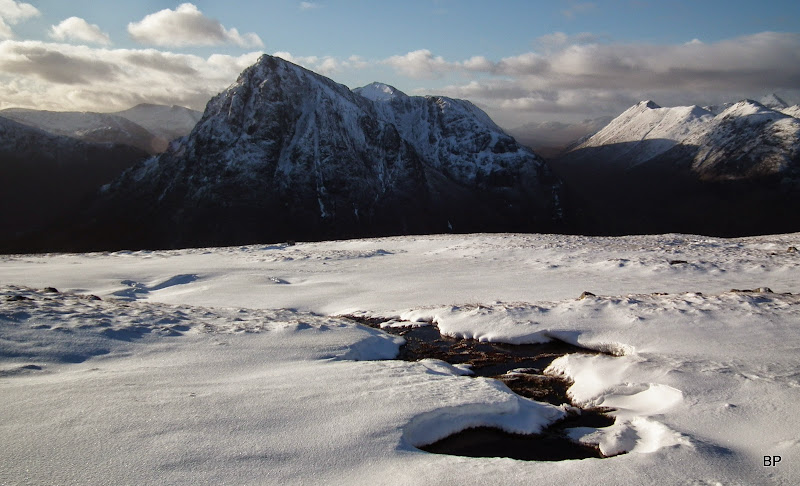 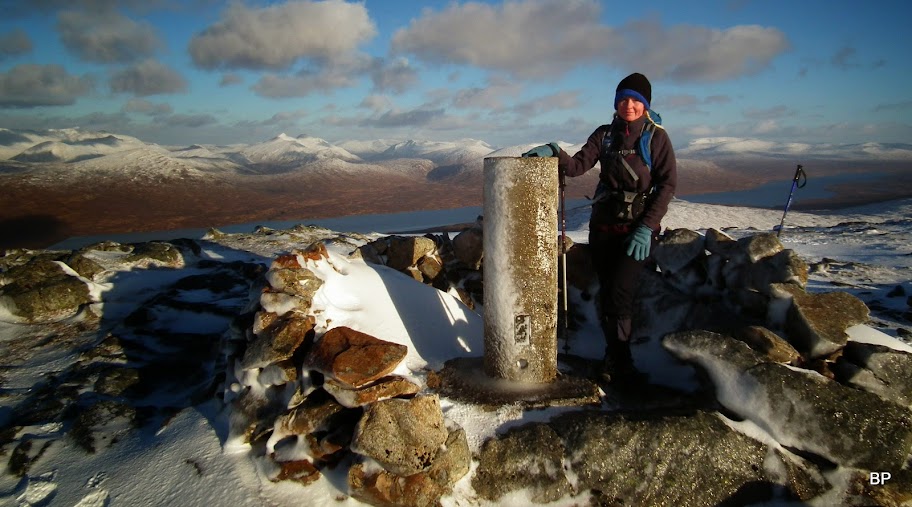 Ben Nevis starting to cloud up. This cold breeze was bringing more and more cloud from the south-east: 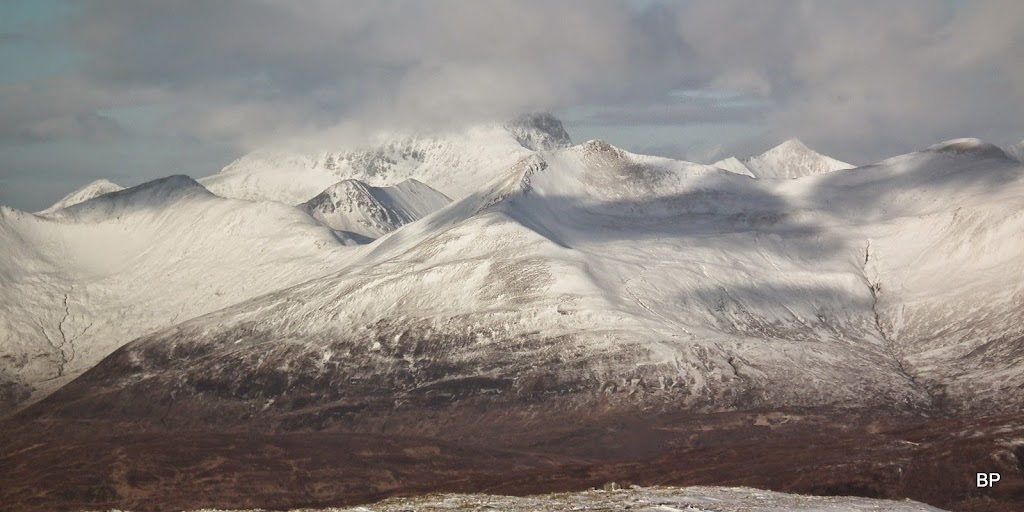 ...but before we lost the best light and the blue sky background, we managed to take another portion of North Face portraits 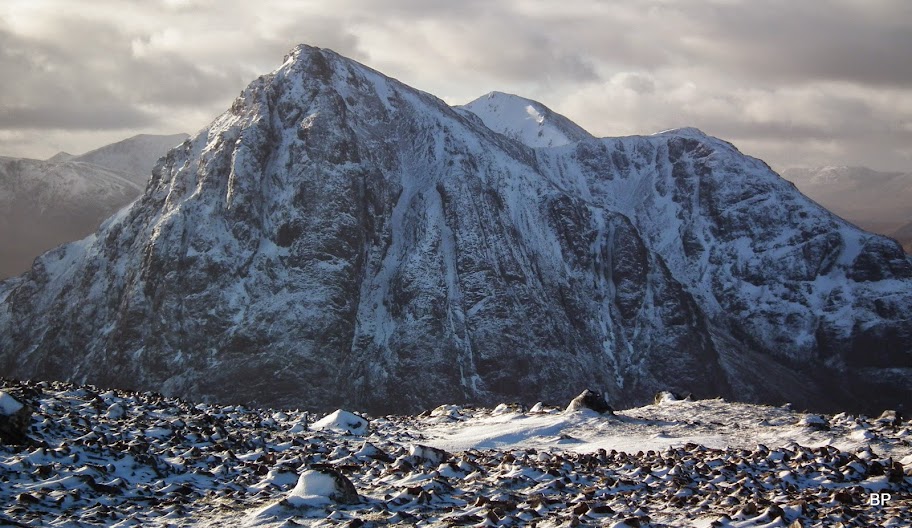 One more... I just cant help myself: 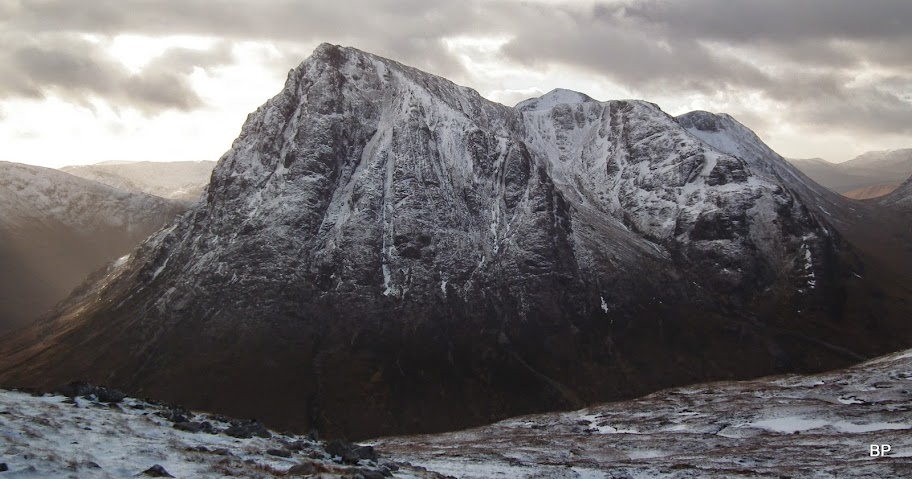 A quick cuppa to warm up and we wrapped up in additional layers of clothing. Seriously cold, but still smiling: 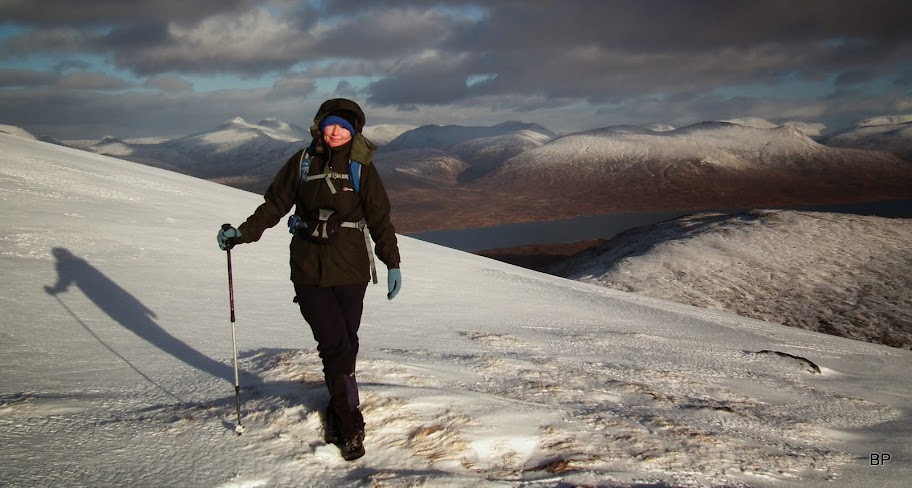 Kevin's camera lasted to about half way down, but before it, too, succumbed to the low temperature, he did catch some interesting snaps of the Big Brother Buachaille with cloud bulging around it: 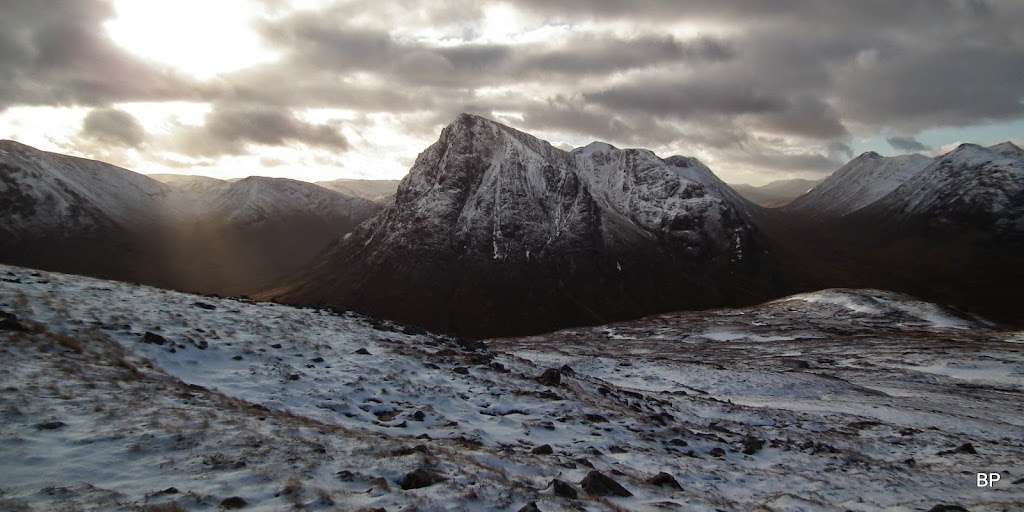 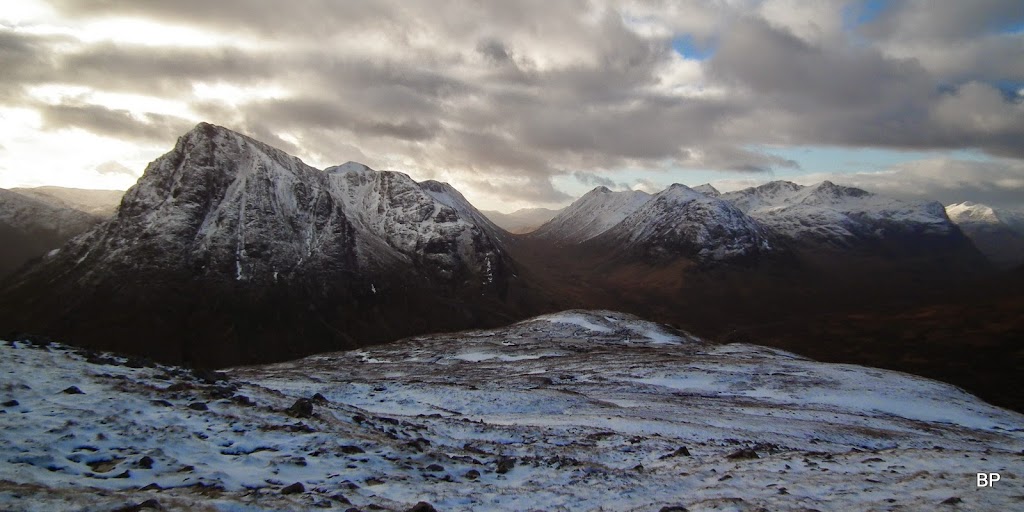 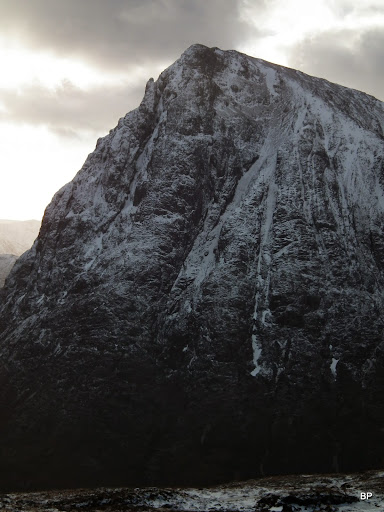 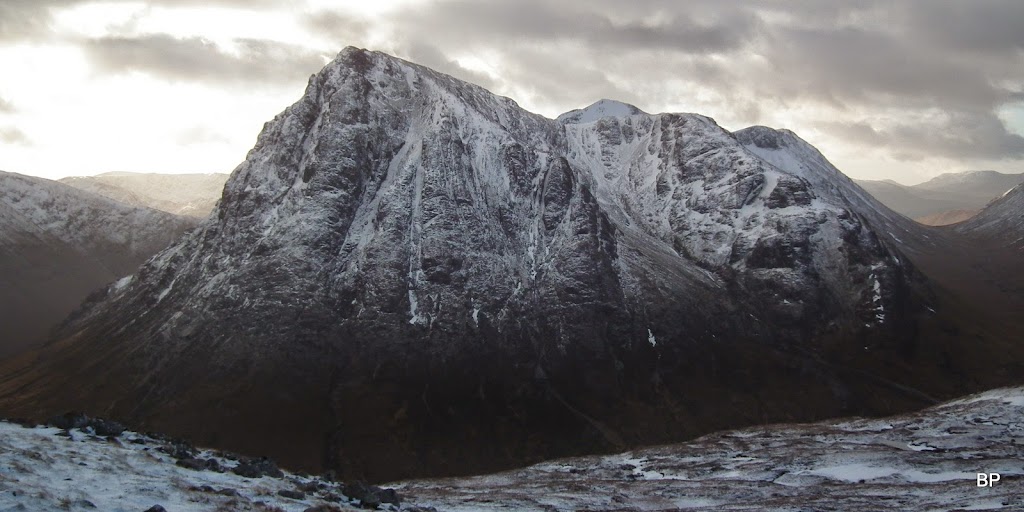 All right, enough!
The Mamores panorama with cloud forming:

The last photo before leaving this fantastic place, with the northern view behind me. I always wanted to taste some Glen Coe magic in winter and, well, I got all I asked for 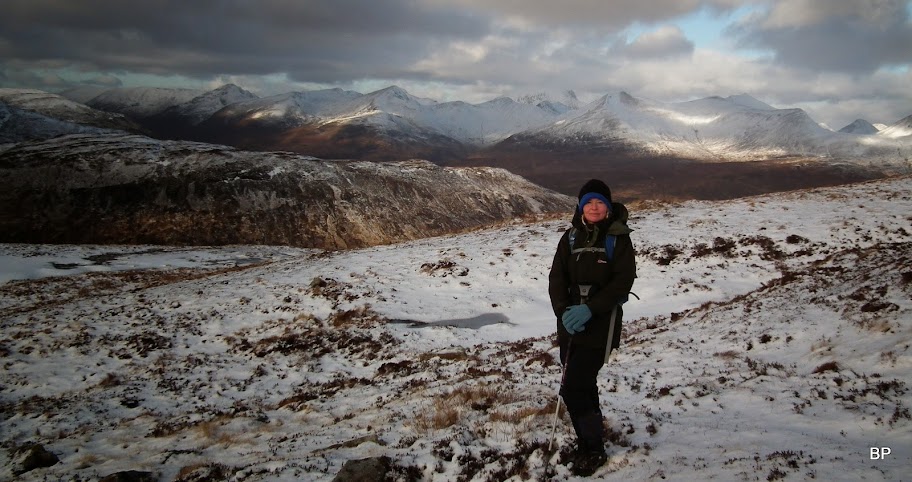 OK, call me boring, this is a hill TO DO! Lots of magic for little effort, really

I'm sure this Corbett would be a nice treat in summer, too, but winter conditions add much to its charm. And though I'm not the first, and probably not the last person to recommend Beinn a'Chrulaiste, I'll still say it: WELL WORTH IT. Meow!

Two more TR's to come (if they don't disappear while being posted!!! Hope to trek up from the deep South to God's own country in a couple of weeks for a few days in the snow...

I seem to recall that you like a bit of scrambling - have you done the Big Babe via Curved Ridge? If not, you've a great treat in store!

That is the best to do list I've ever seen!