chockstone gully.gpx Open full screen  NB: Walkhighlands is not responsible for the accuracy of gpx files in users posts

Got chatting to a few climbers on the Cobbler last winter, one let me borrow an axe so I could try using two on a steep slope and I got the bug for having a go at some easy winter climbs. Kept an eye on ebay during the year and picked up a pair of axes, pointier crampons and a helmet so I kind of looked the part anyway .

I headed up the Cobbler on Sunday since there had been a good dump of snow, weather was sunny and the routes were busy. Was thinking about Chockstone Gully or Great Gully, which are both grade II, but I ended up just wandering up the north top and decided to come back during the week when it was quieter and I was less hungover.

So, it was back up the zig zag path the following Tues. It was a bit claggy but I saw footprints cutting off the main path towards the Cobbler so I followed these - a bit earlier than the normal summer/path and the burn had iced over so you can walk over it in places. 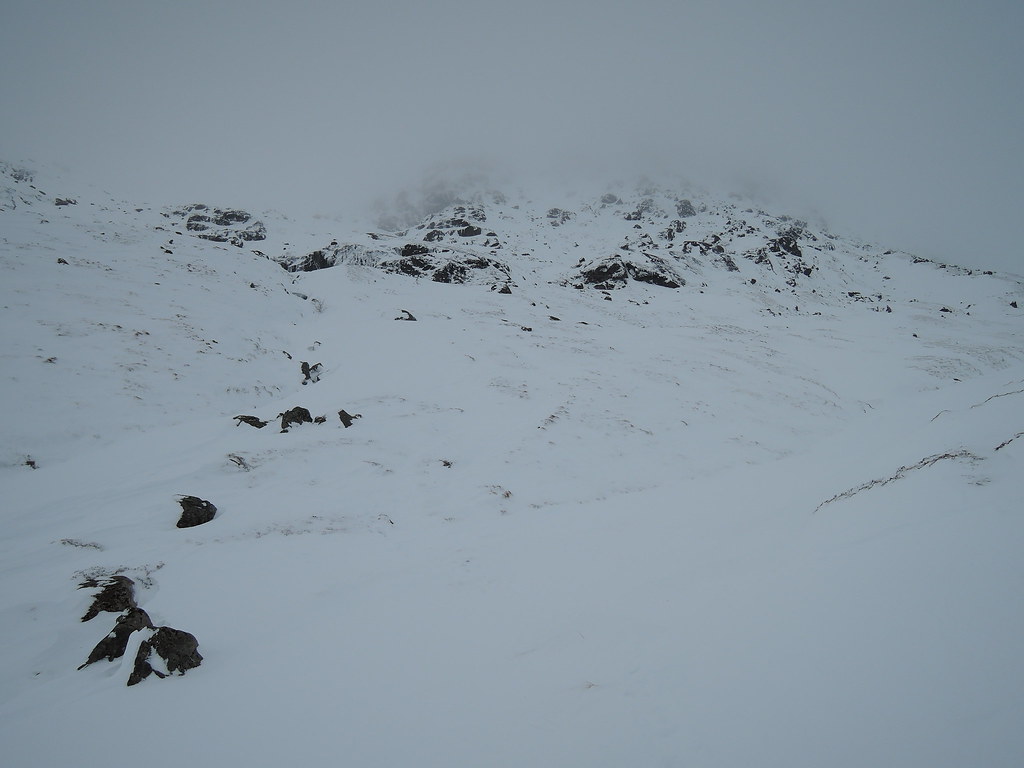 Hard to see where I was in the clag but some of the footprints branched to the right and I knew these would be going to Chockstone Gully so I followed them. 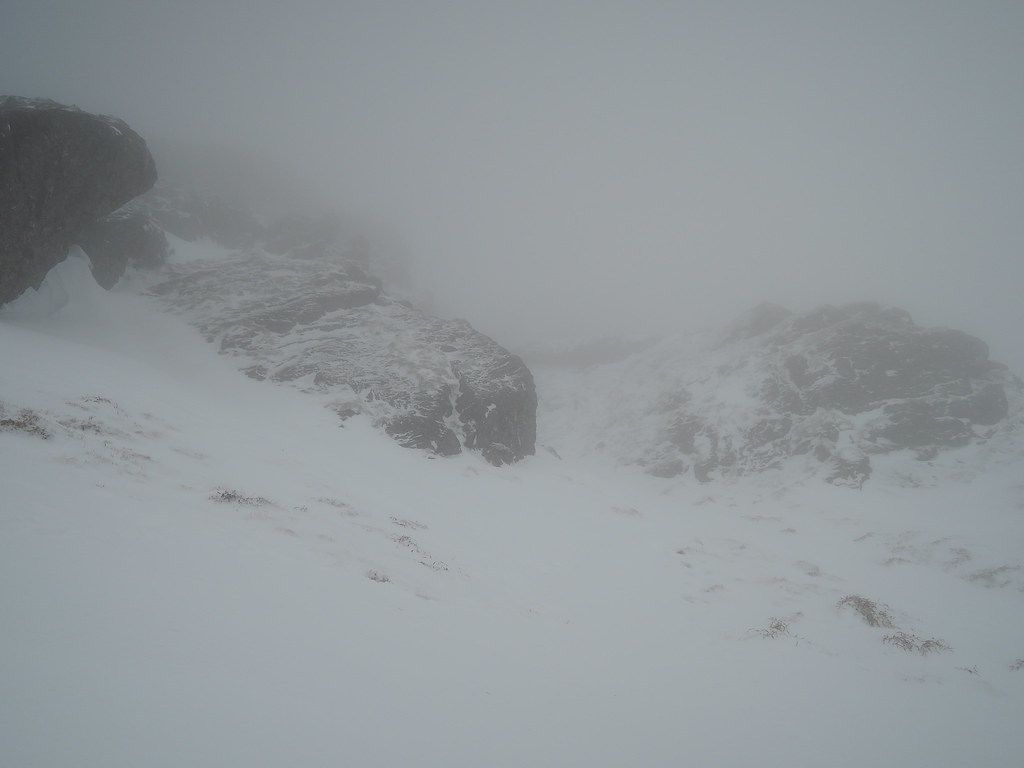 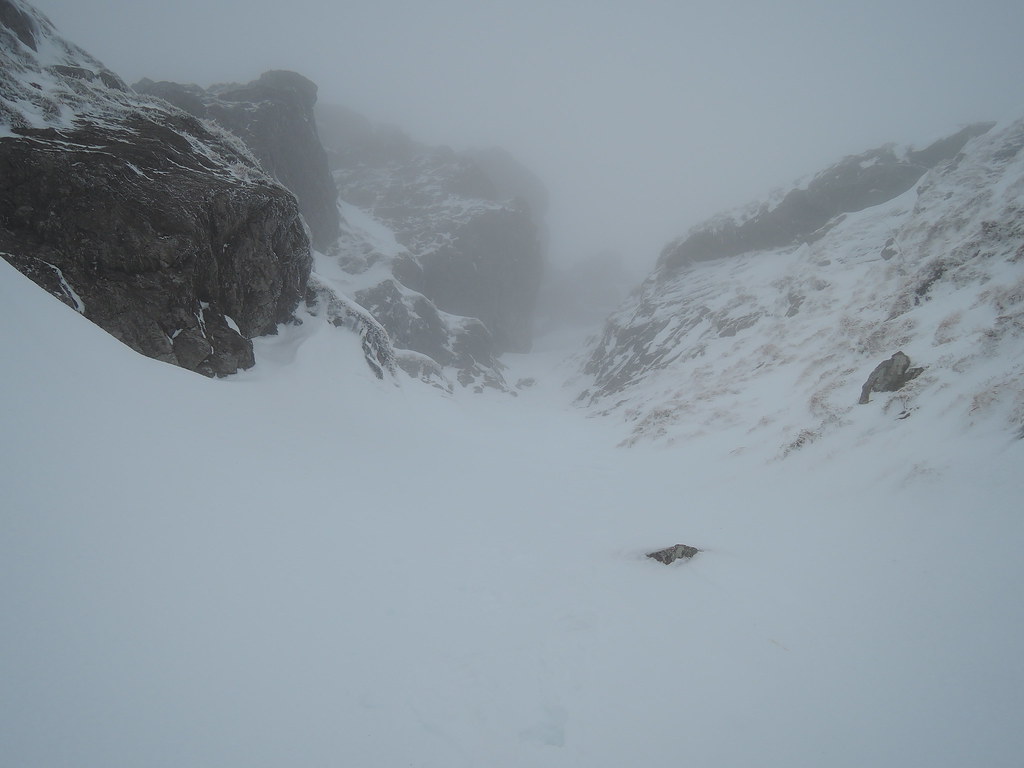 Seemed easy at the start, not too steep and there were footprints to follow. Snow was fairly solid but soft in places. Chockstone arch: 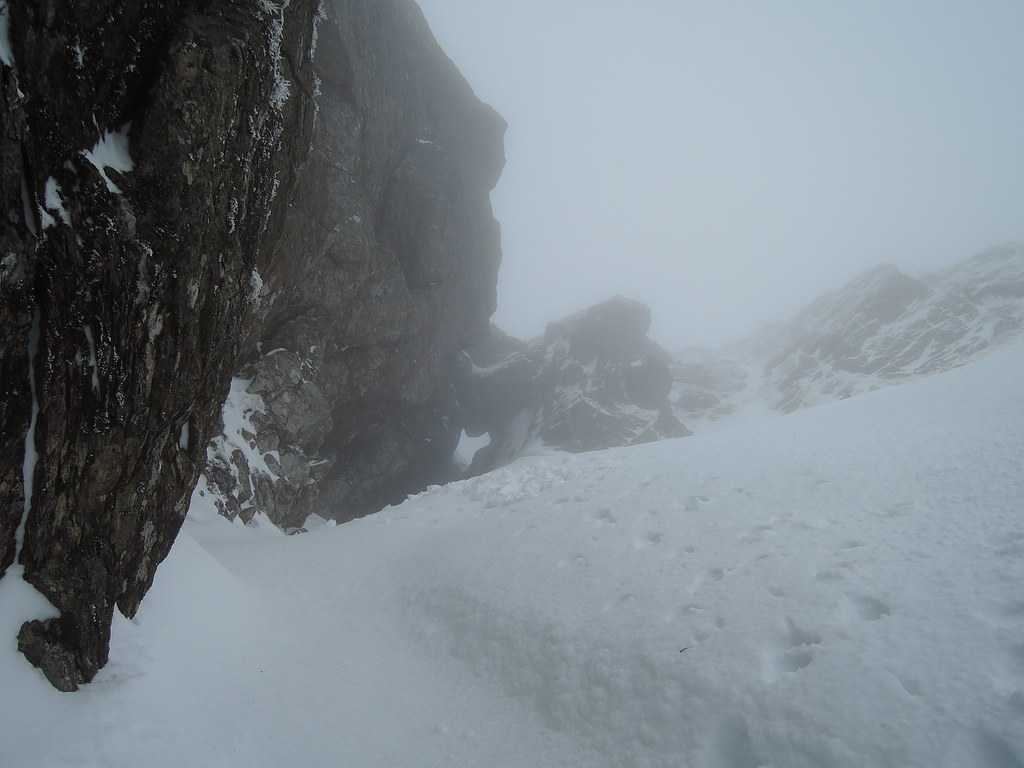 Back down from the same place: 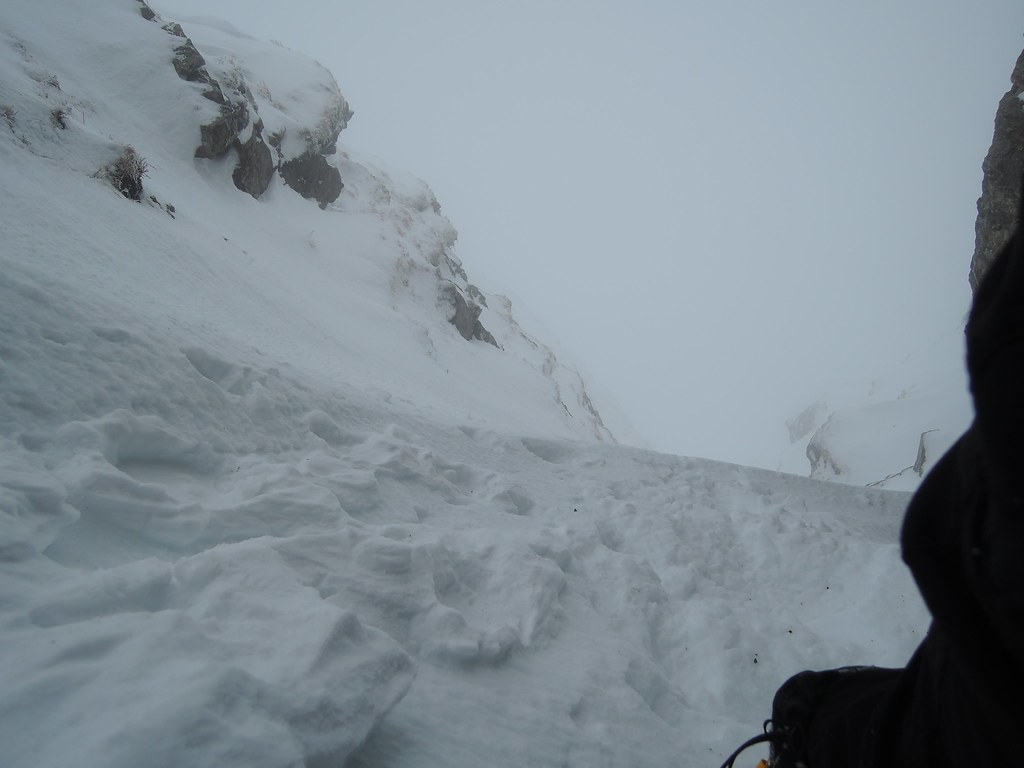 Getting to the end, guide book says to exit by a narrow gap on the left or over a slab on the right. The gap looked less steep so I had a closer look but it was too tight with the snow. The slab was a bit trickier, snow wasn't as firm as earlier and I had a few 'what am I doing here?' moments 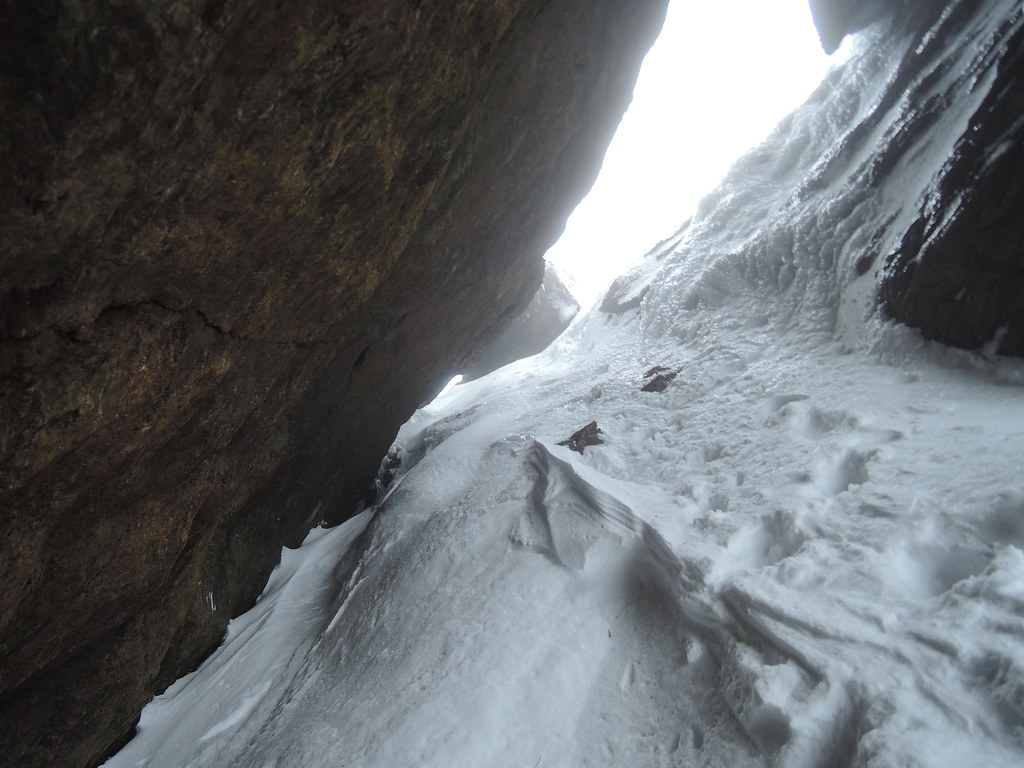 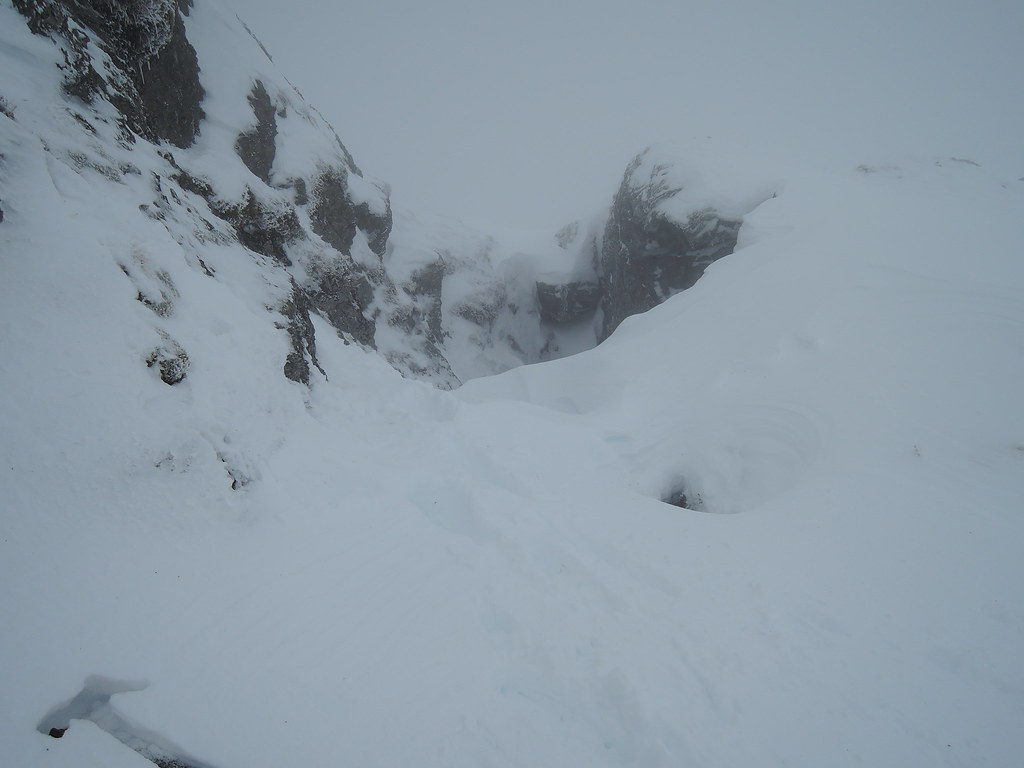 Some pics from Sunday, when the weather was clearer: 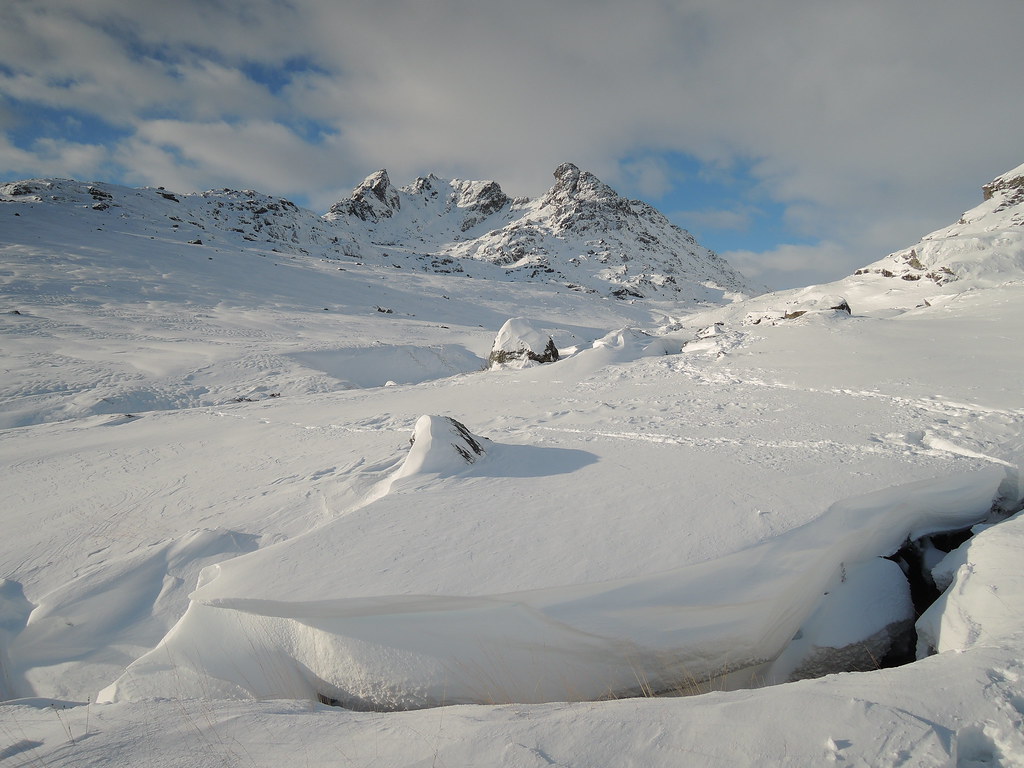 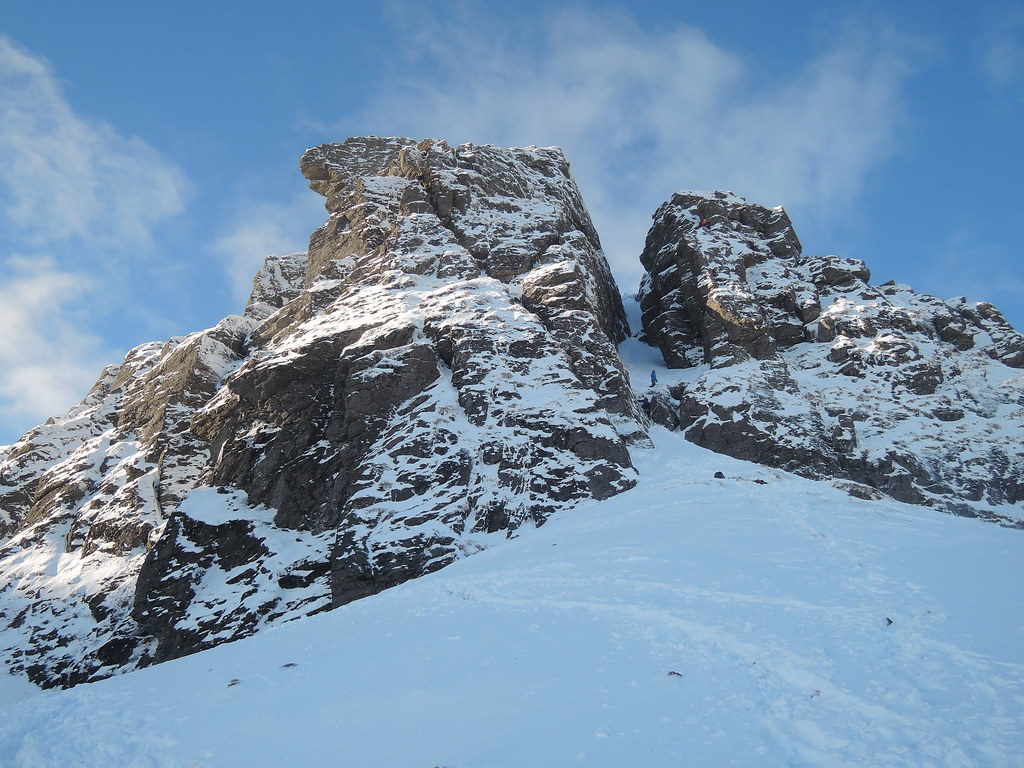 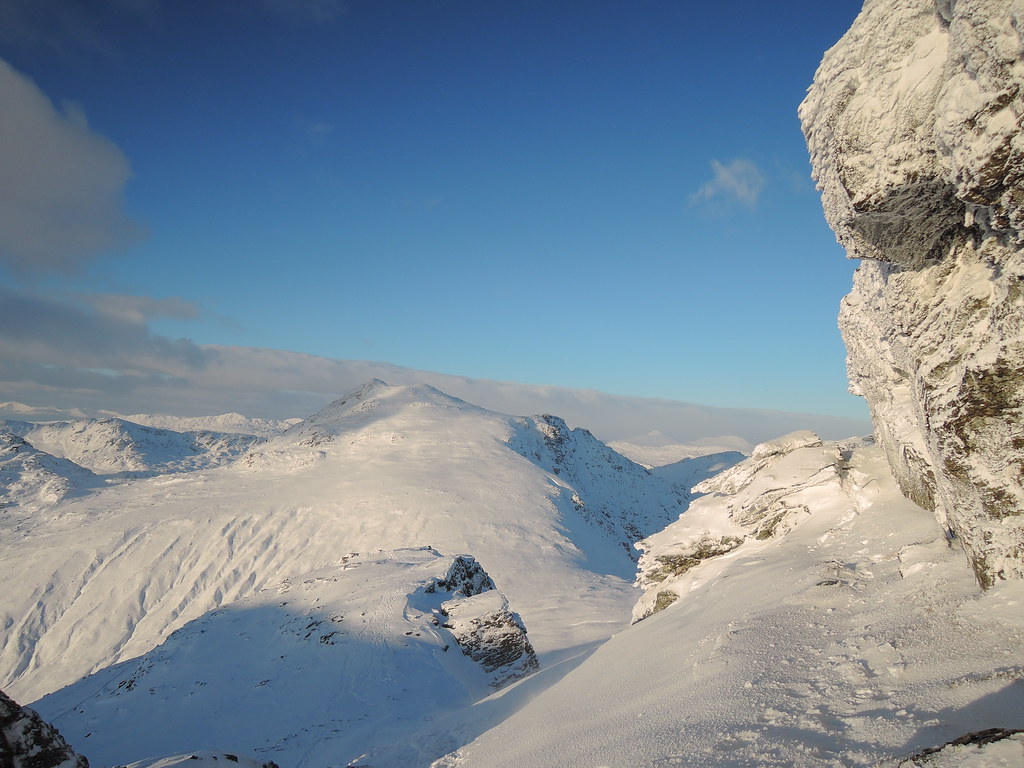 On the north top. 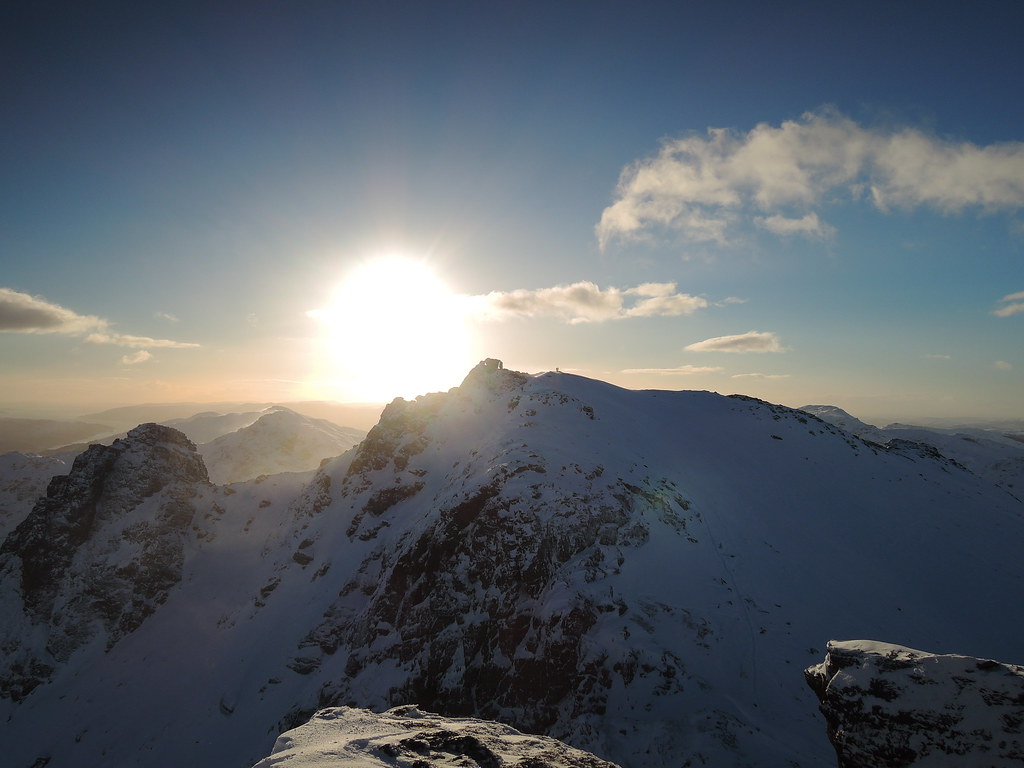 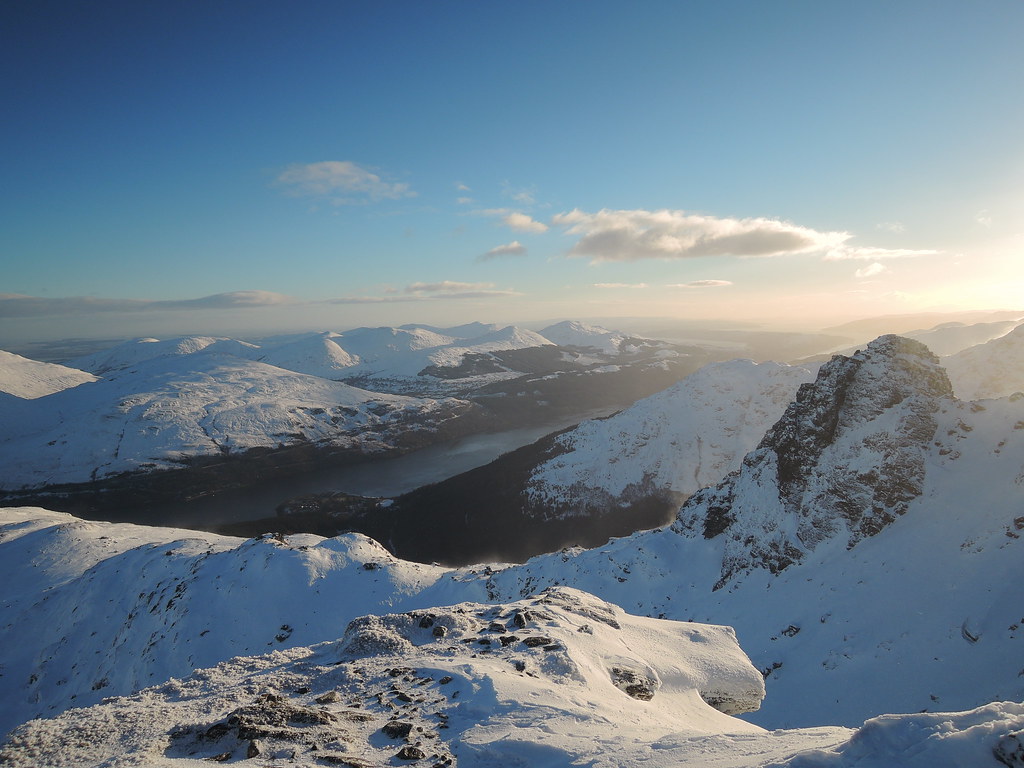 Ben Lomond and the approach path at the side of the burn below. 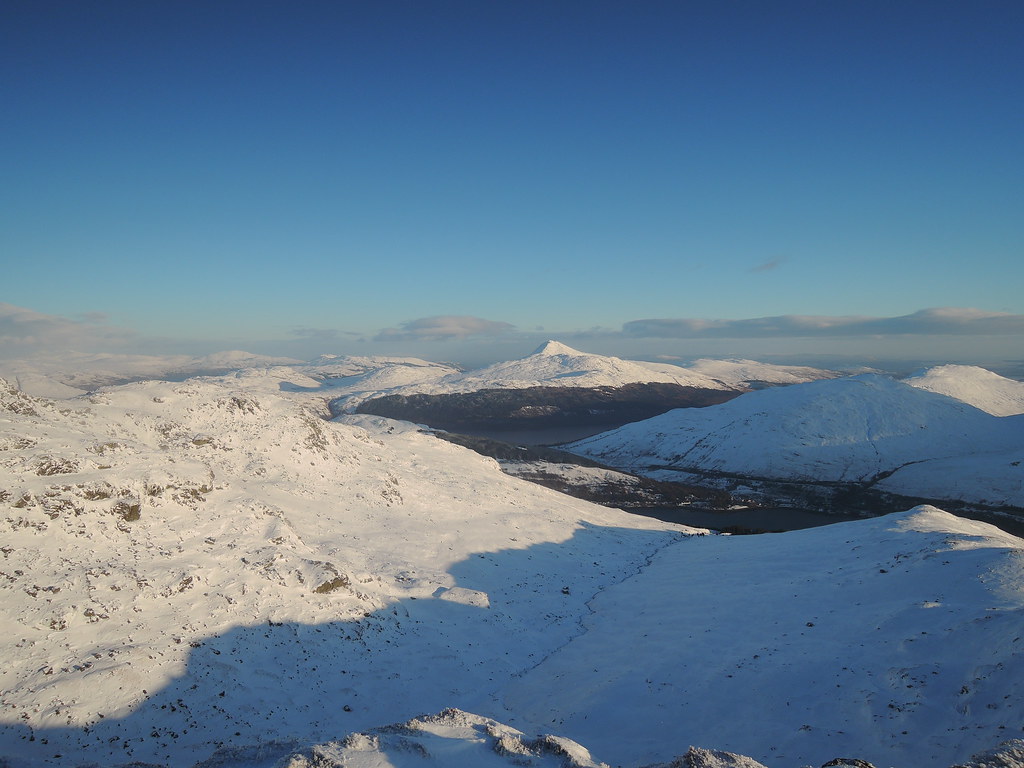 Were you the hangover guy i met while descending the cobbler on Sunday ?
We were on MacLays crack, the line going bottom right to top left on your great gully photo, did you not go up great gully too ? usually done with chalkstone.

I may have been that hungover man, but I'm sure there were a few of us on Sunday! I was thinking about Great Gully but the exit from chockstone was a bit trickier than expected so I called it a day - how does Great Gully compare?

they are both much the same, but as always conditions dictate, once your over a little wall its pretty much a snow plod to the exit.

What a gorgeous day Sunday was - lovely photos!

I was there too!
I was the wee asian guy on the mountain... I think I was the only one there! Fantastic view that day, though a bit gusty in the morning.
I'll share my photos too!

mgmt! wrote:they are both much the same, but as always conditions dictate, once your over a little wall its pretty much a snow plod to the exit.

Cheers, went back & did it today - very powdery though.

Eggs wrote:I was there too!
I was the wee asian guy on the mountain... I think I was the only one there! Fantastic view that day, though a bit gusty in the morning.

I didn't make it till the afternoon, had to use the other car park since it was so busy!

Thanks, looks like a change in the weather this weekend. I was there too on that Sunday. I was surprised at how much snow there was ...definitely a lot more than last year although it did come a bit later this year.

I arrived a bit later having taken the train and yomped it over from Tarbet station. The car park was well busy and there were a lot of people out that day.

Due to my late arrival I only went as far as the foot of The Cobbler. I do these hills just about every week to stay hill fit so I wasn't that bothered about reaching any summits that particular day.

Didn't fancy ploughing through the snow in the dark on me own with no obvious path so I erred on the side of caution, turned back to the Narnain Boulders and fired up the Bubba-Q for Steak and Saki and watched a huge group of about 15 head down from the Cobbler and across the burn using the fire as a 'beacon of hope' as one of them said.:-0. Sorry I didn't bring enough steak to go around! Feeding of the Five Thousand comes to mind.

Shortly after they left , two lads from Old Kilpatrik Hills stopped by for a chat n' all.

Bumped into quite a few randoms and kindred spirits on the day. One guy in particular, didn't catch his walkhighlands name, gave me a hearty greeting after recognising me from my posts as Bubba Ribeye, the legendary steakman of the Arrochar Alps lol.

Thanks to David and Brian? for the lift back to Glasgow after just missing the 6pm bus. It was great meeting you both and hearing about your rock climbing adventures :-0

Loking forward for some more 'fun and frollics' in the snow as soon as .