Meall Doire Faid is one of those Grahams which can be linked to a longer traverse of surrounding hills without much additional effort. It is most often climbed as a sidekick to its higher neighbour, Beinn Enaiglair. I do actually fancy repeating the two together one day, but on a short January day I preferred to concentrate on the Graham only.
We climbed Beinn Enaiglair in 2011 on a warm August day, but midges were so horrible, we abandoned any hopes for adding the Graham and run back to the car park as fast as we could

That left Meall Doire Faid on my "to-do in winter conditions" list.
Because weather wasn't exactly first class, we expected heavy cloud, but when we arrived at Braemore Junction, the cloud level was just above the summit of "our" hill. We paid a short visit to Corrieshaloch Gorge (I posted a separate TR on this) and then returned to park at the large car park by the junction.
Our route:

Track_MEALL DOIRE FAID 04-01-15.gpx Open full screen  NB: Walkhighlands is not responsible for the accuracy of gpx files in users posts
I remembered from our previous visit, that the path from the car park to Home Loch was a boggy nightmare and therefore prepared myself mentally for snorkelling

But as it turned out, the path has improved slightly since our last climb here and it was bearable - just about.
Beinn Enaiglair's summit was hidden in clag, but I kept fingers crossed for the Graham - maybe we will get some views at least... 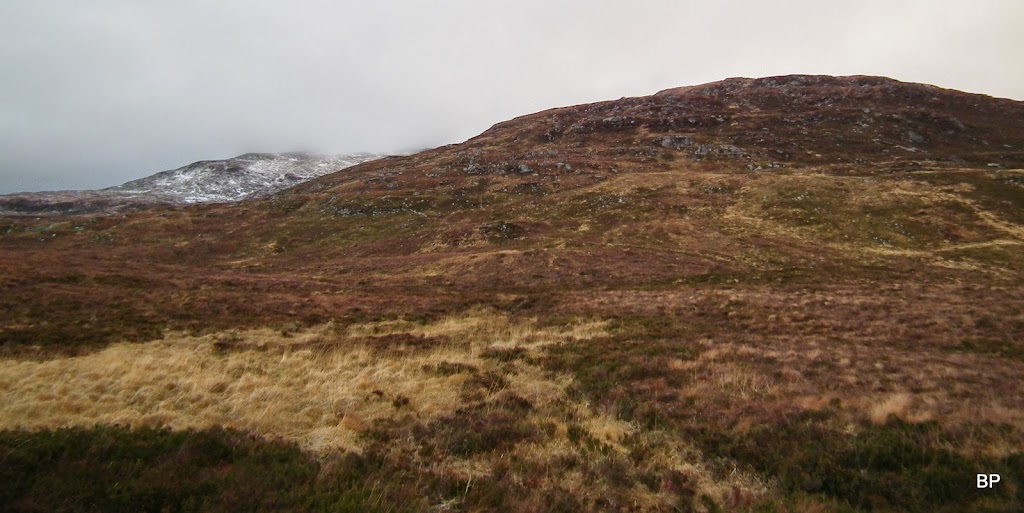 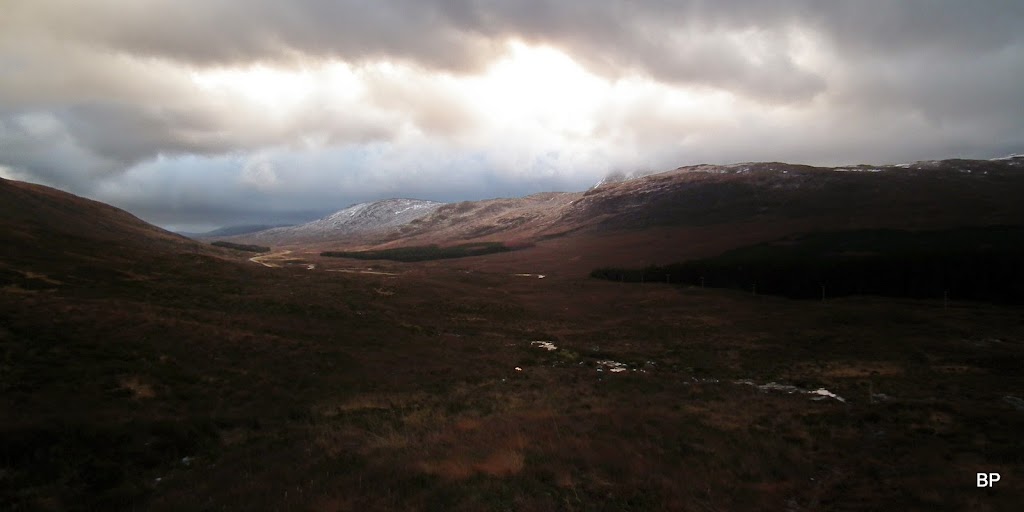 The walk to Home Loch was uneventful if a bit squelchy and as we reached the banks of the loch, I was disappointed to see nothing at all... I remembered this spot was a good viewpoint towards An Teallach, but at the moment it was just cloud passing by...

There are a few different routes to climb these two hills and initially, we planned to follow the path all the way to Bealach nam Buthan and tackle the Graham from the western side. But as we trudged up the squelchy moorland, I looked at the hillside above us and said - just as well we could go straight for the summit from here! Kevin checked on the map - it will be steep, he noticed, but we could then use the path as descent route.
We didn't waste time and left the path, about half way along Home Loch. To begin with, it was a wet nightmare, but as soon as the ground steepened and we started gaining height, conditions underfoot improved. There is no obvious path but we used sheep tracks and made a good progress. After 200m or so of ascent, we stopped to glance back, and heyyy, there was still hope for us as the cloud started lifting, if only slightly: 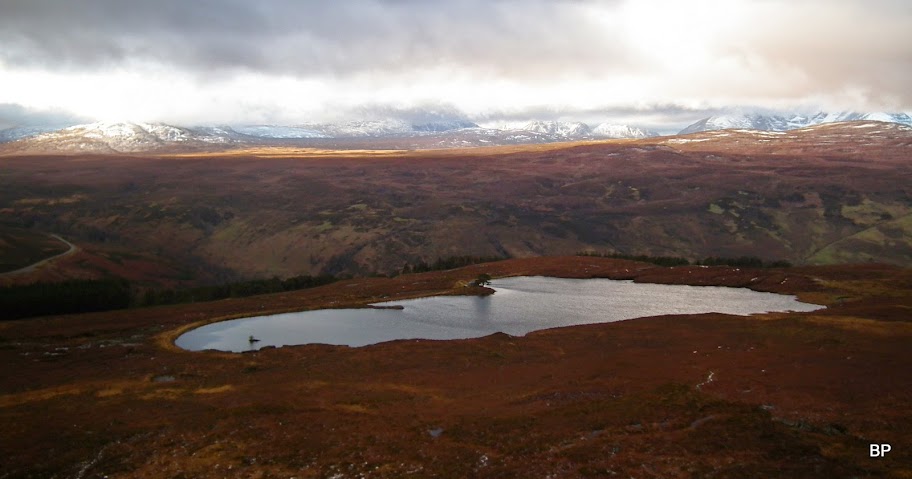 We caught a glimpse of An Teallach...

The higher we got the better the views and even on a semi good day panoramas can be impressive. Take a silly destitution road, for example: 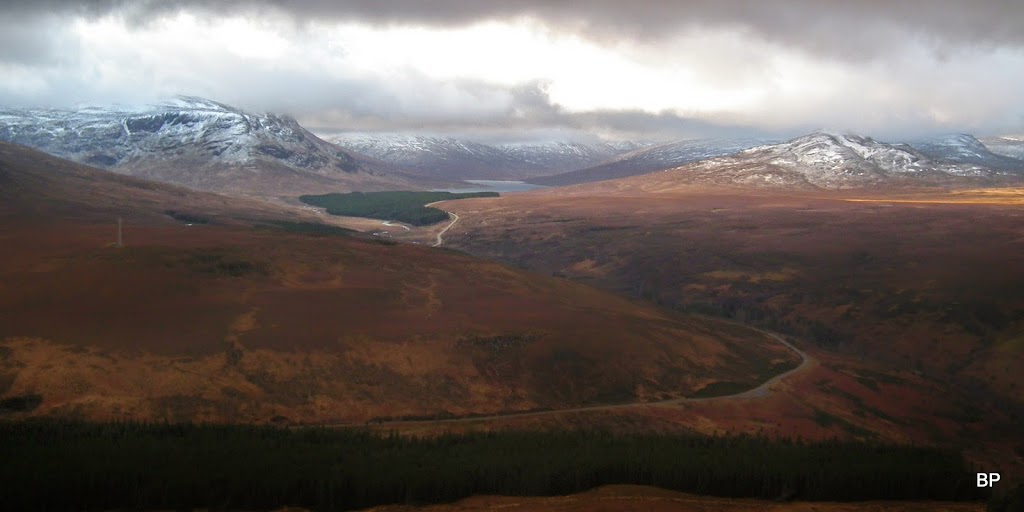 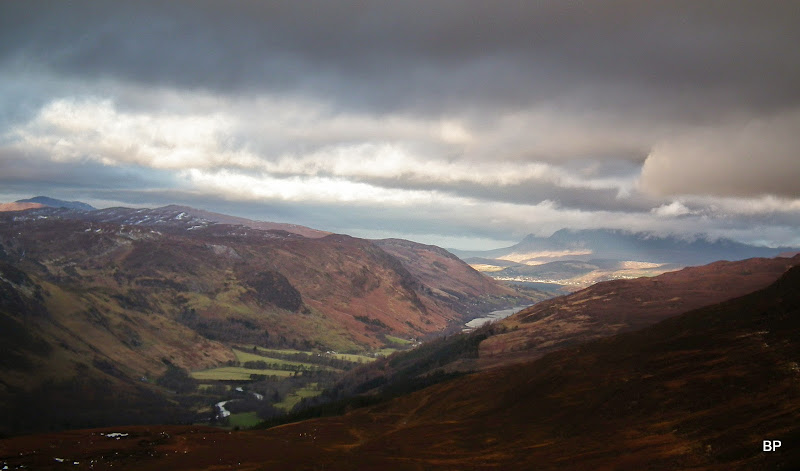 The Fannichs were in bad mood: 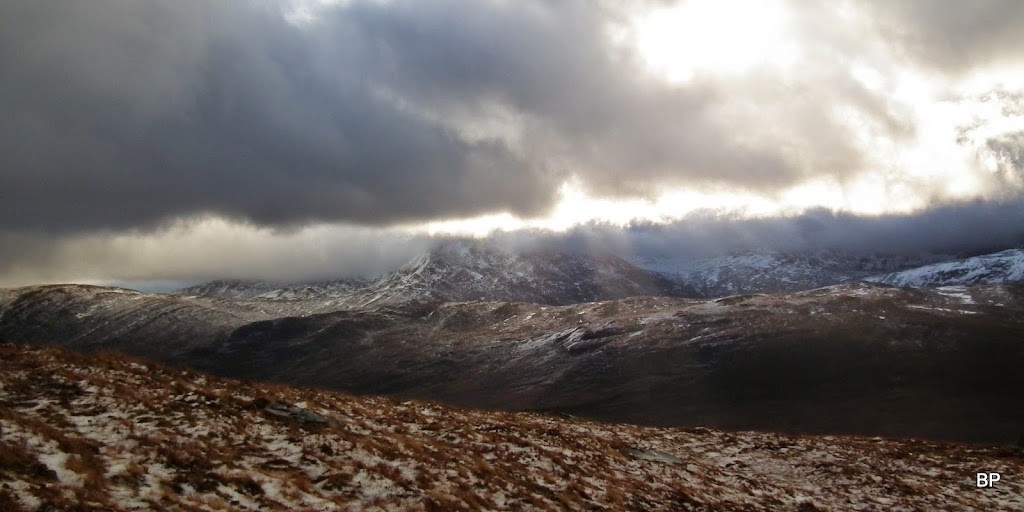 That must be the summit! Towards the end, the slope is a bit less steep and we found a sketchy path: 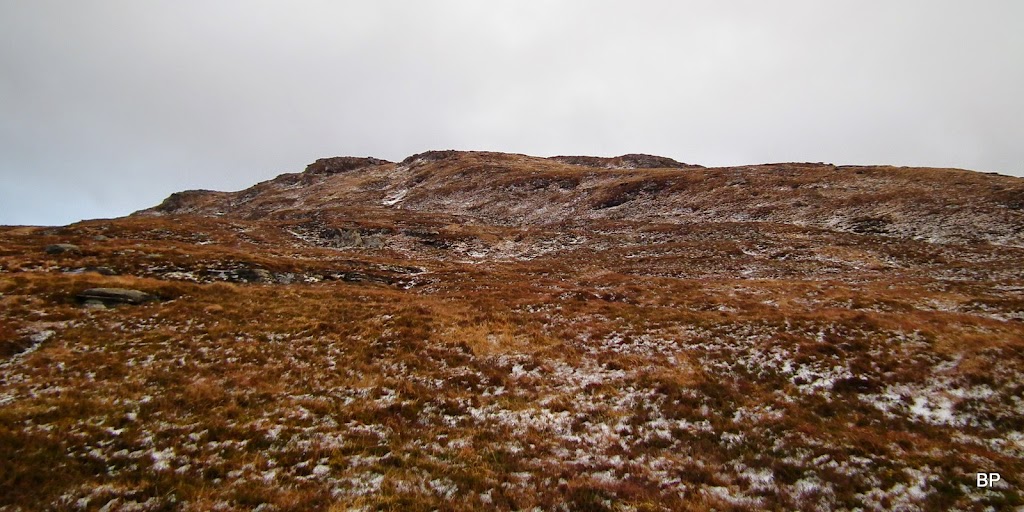 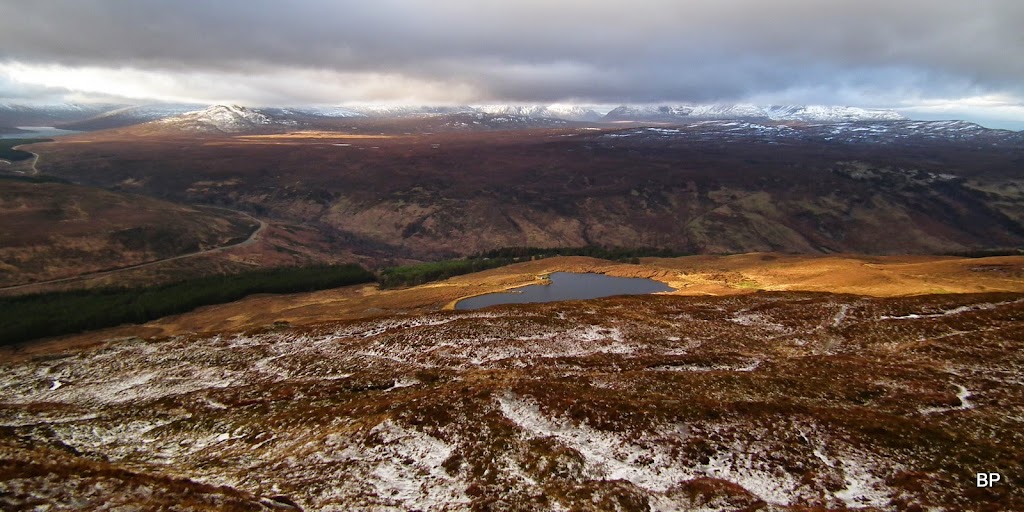 A feathery friend hovered above us...

Arghhh... This has to be the summit! 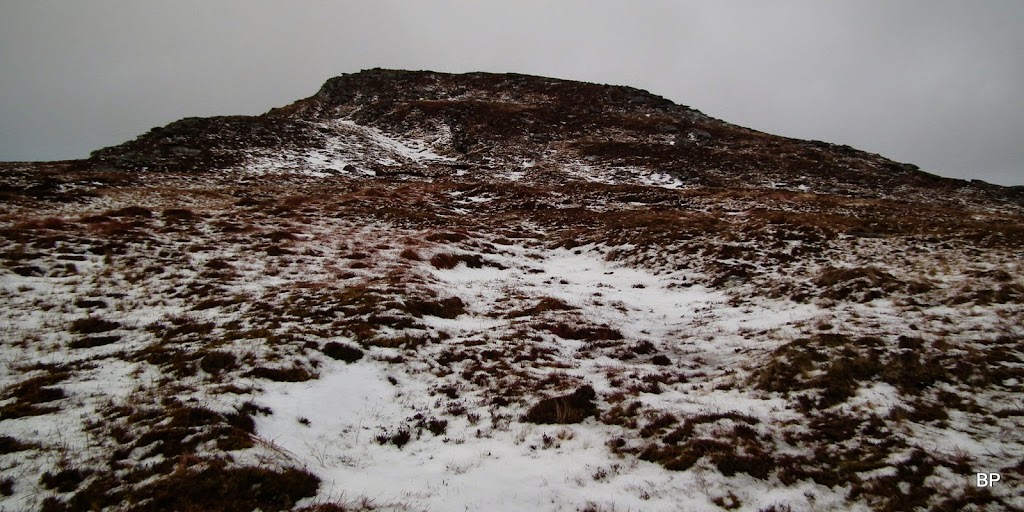 More snow here and more wind, too... My pocket camera died again. I guess there's no point taking it on cold winter days. I'm glad Kevin's Fuji doesn't give up so easily... It might not have been a good day weather-wise, but we still managed to capture some interesting cloud spectacle: 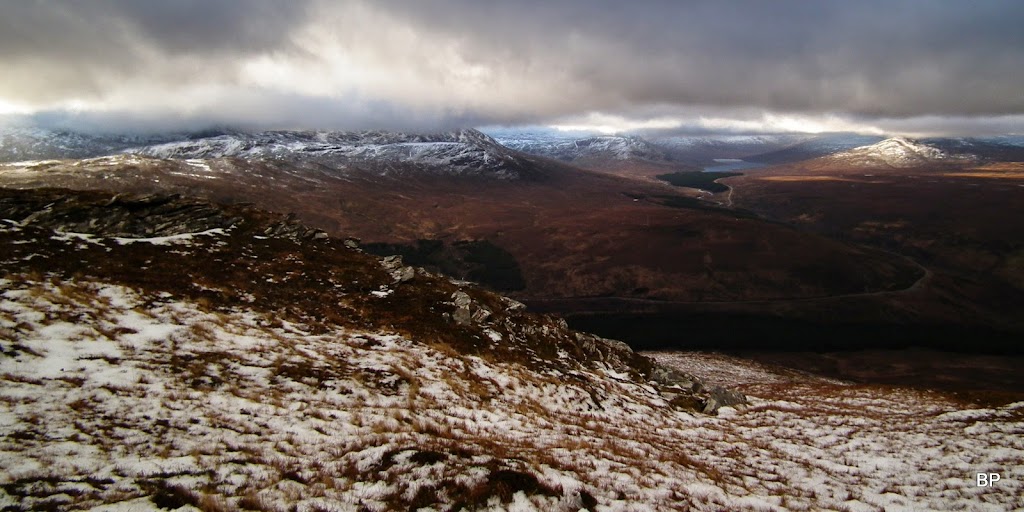 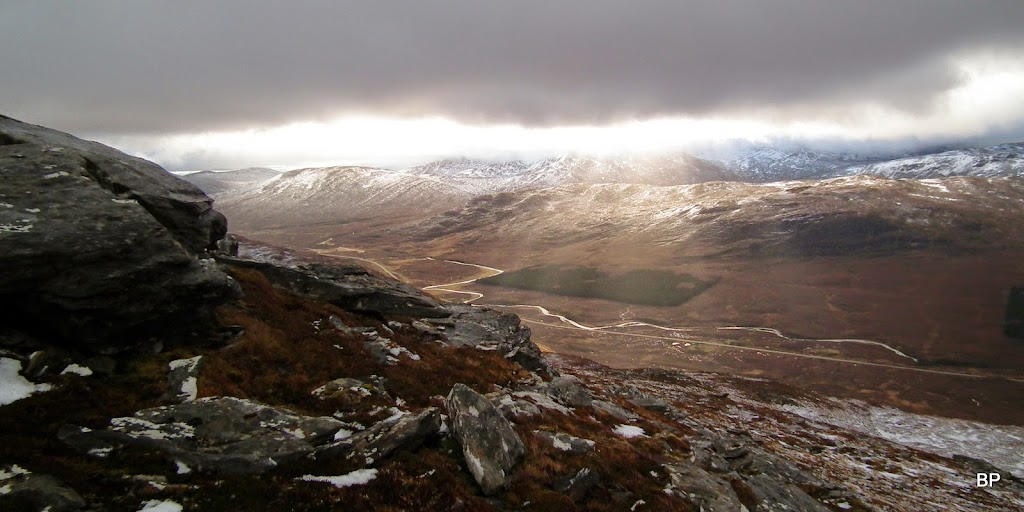 From just below the summit we could now see along the ridge of Meall Doire Faid towards the lower top, Meall nan Doireachan. Another variation of the route would be to descend by this ridge: 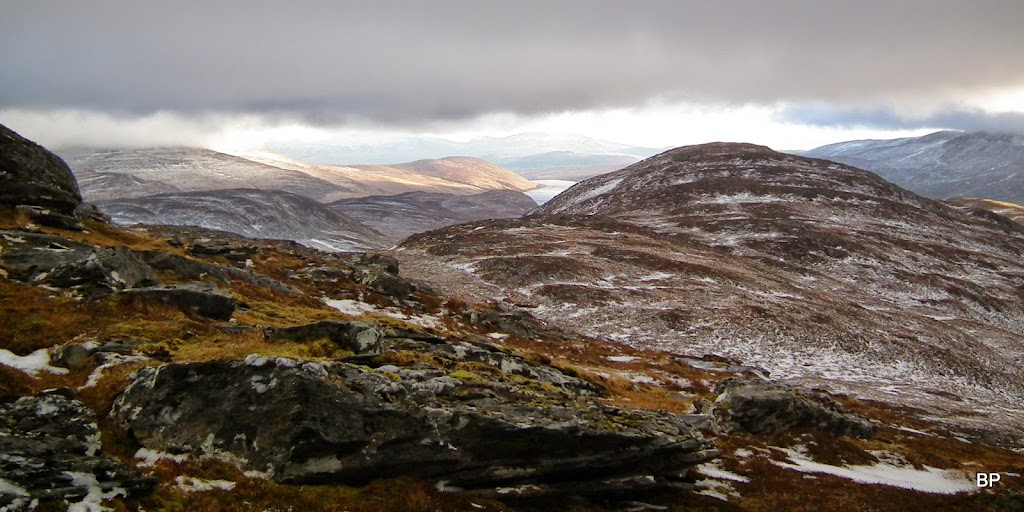 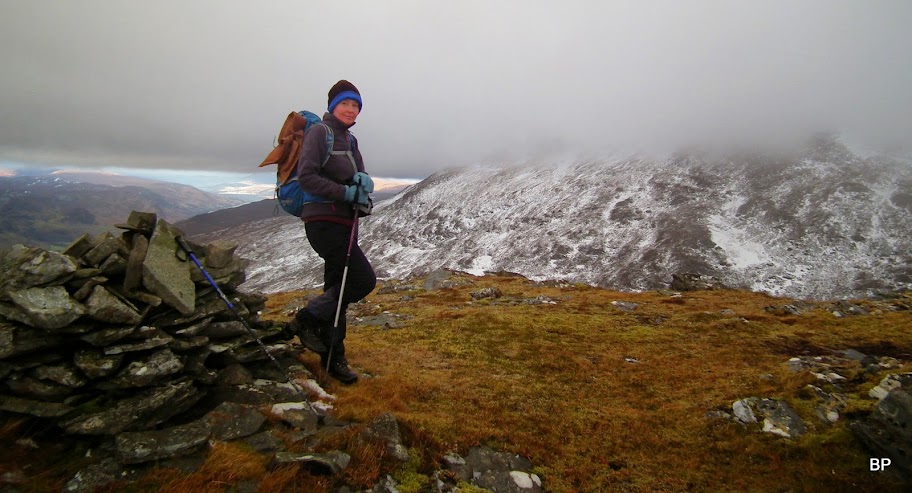 Sadly, the cloud was hanging just above the top of Meall Doire Faid and views were restricted. Here, loch Glascarnoch and Little Wyvis behind, the bigger brother obstructed from view: 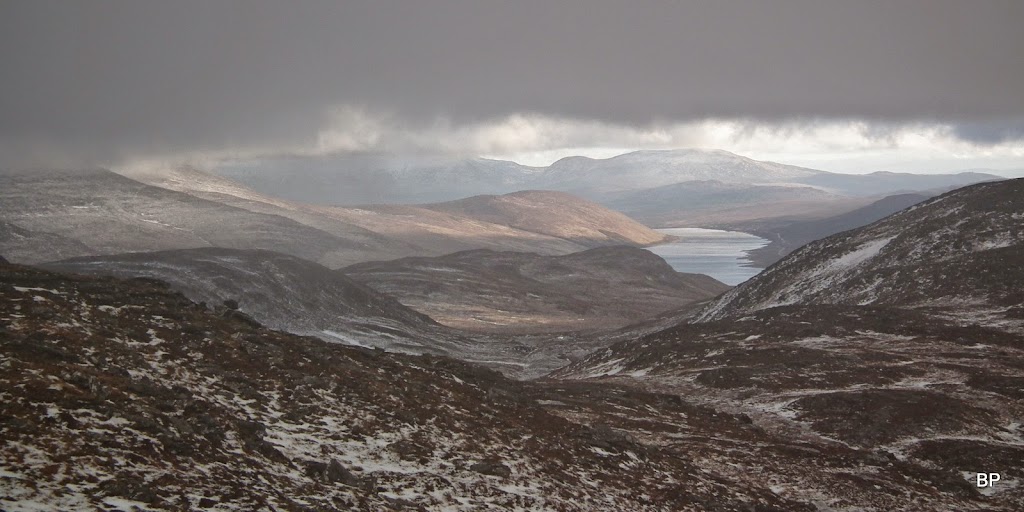 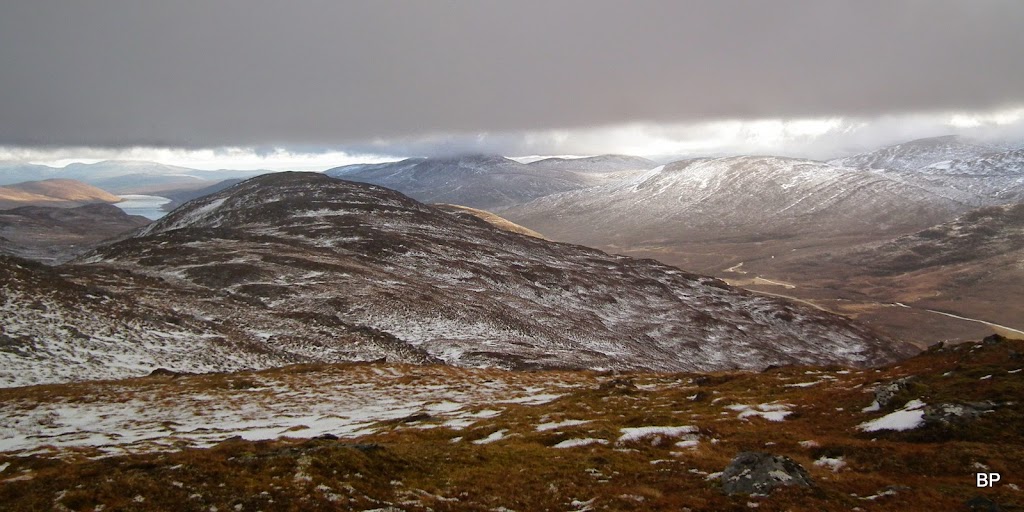 The western side of the Graham has some impressive vertical cliffs... 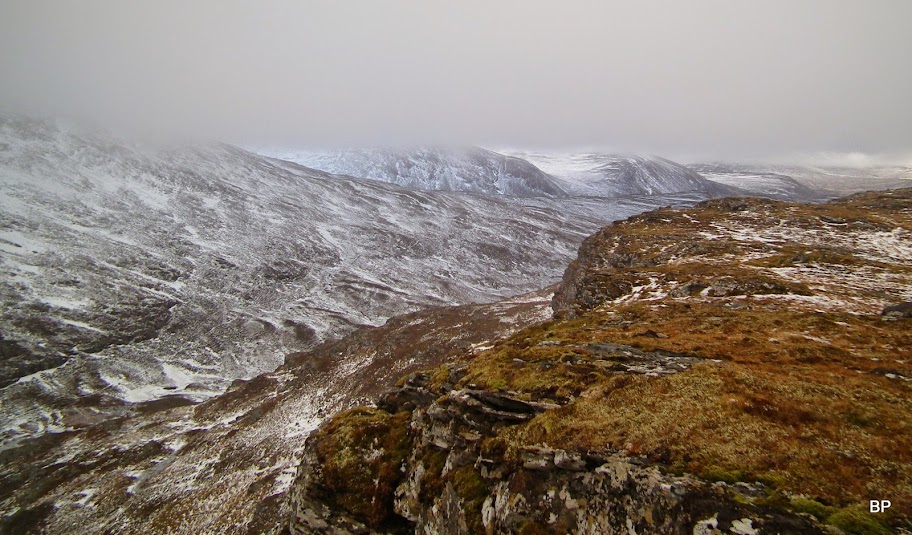 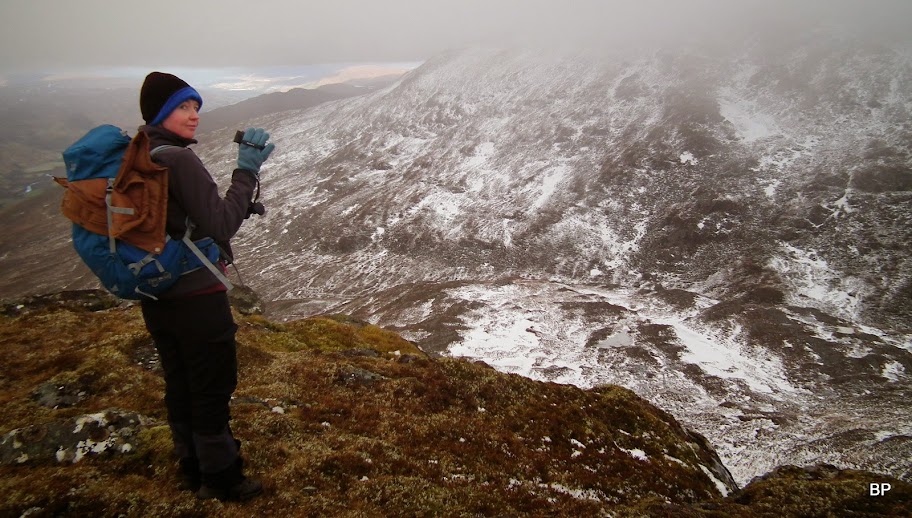 The summit was windy and pretty cold, we took shelter behind a rocky outcrop to warm ourselves with hot tea and wait for the clag to lift a bit more, but it wasn't to be. At least not for a time being. Kevin looked at the map again and pointed to the north - It looks like we'll have to follow the ridge for a short distance and then turn due west. We should be able to make our way down the slope.
As he suspected, we found an easy descent route without problems: 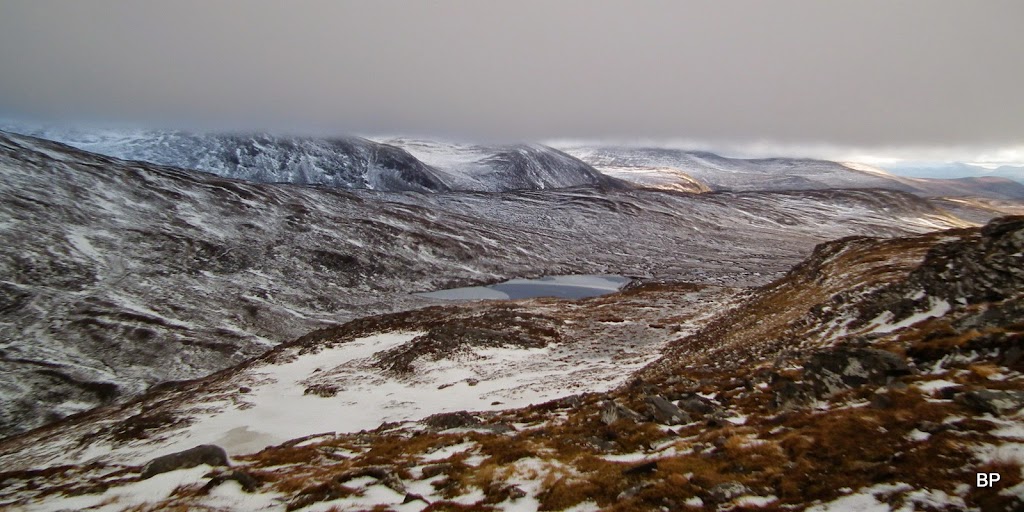 I couldn't resist posing with the vertical cliffs behind me... In summertime this would be a good opportunity for scrambling exercises: 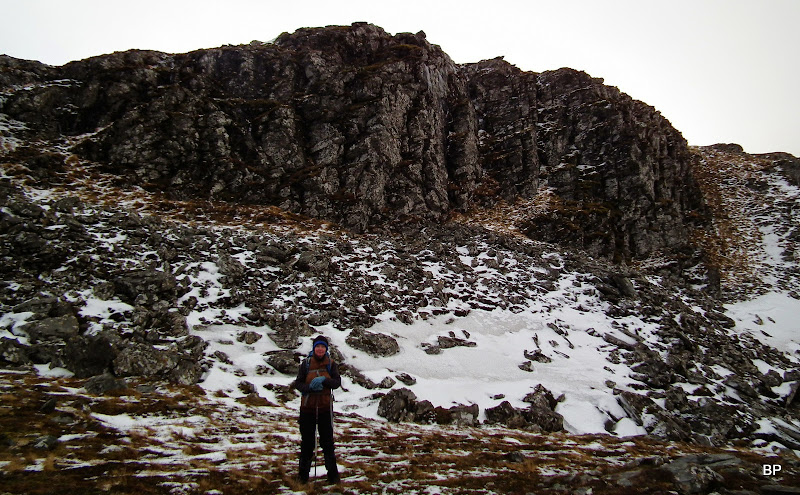 As we were making our way down carefully (there was more snow on the NW side of the hill), the nasty cloud began to burn off and suddenly the surrounding mountains were basking in sunshine.

Why does it always have to brighten when we had already left the summit???? That's not fair! 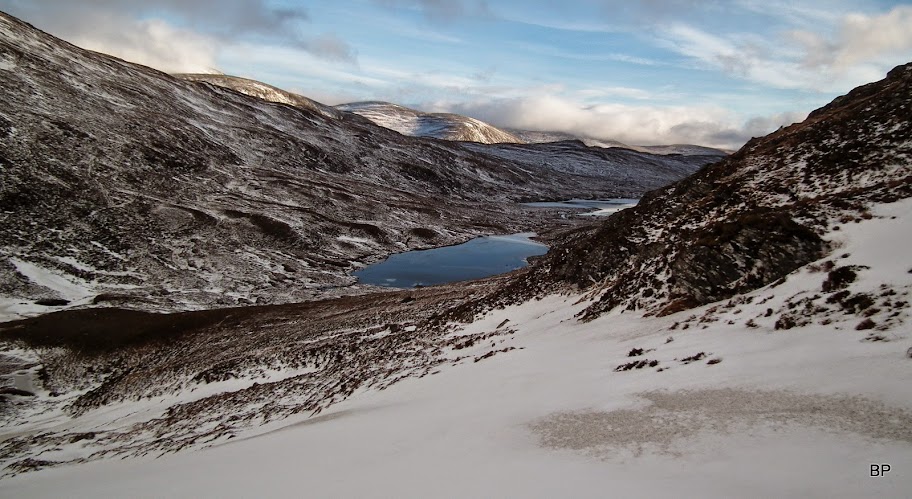 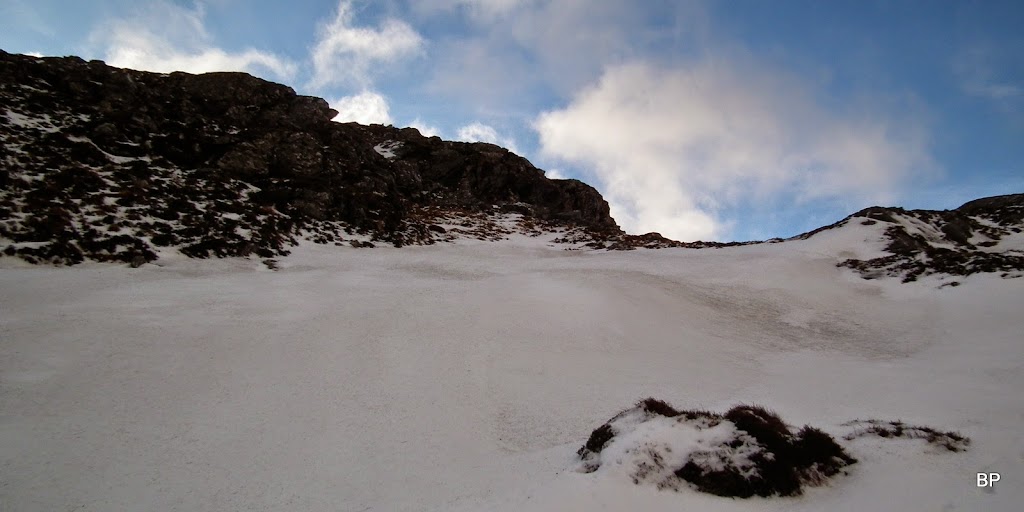 We descended to the bealach and spent a while admiring the two half frozen lochs: 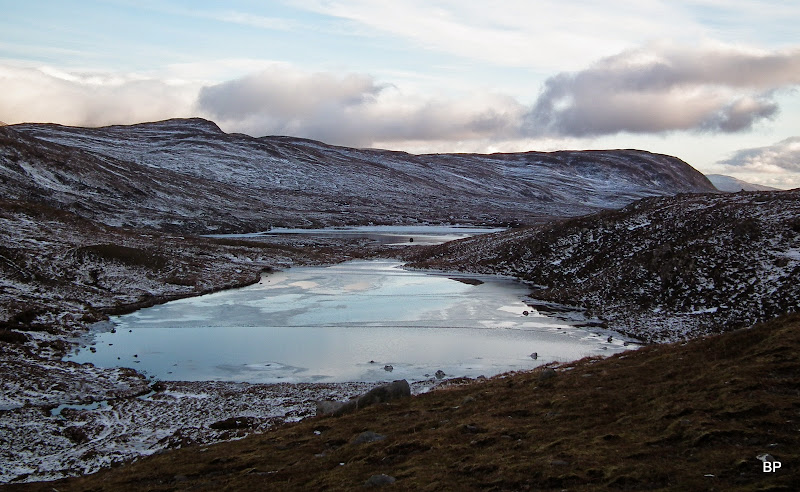 We found the path easily and simply followed it down to Home Loch. The cloud was also lifting from the mountains to the south of us and I knew we were in for a yummy treat, even though we missed the summit views: 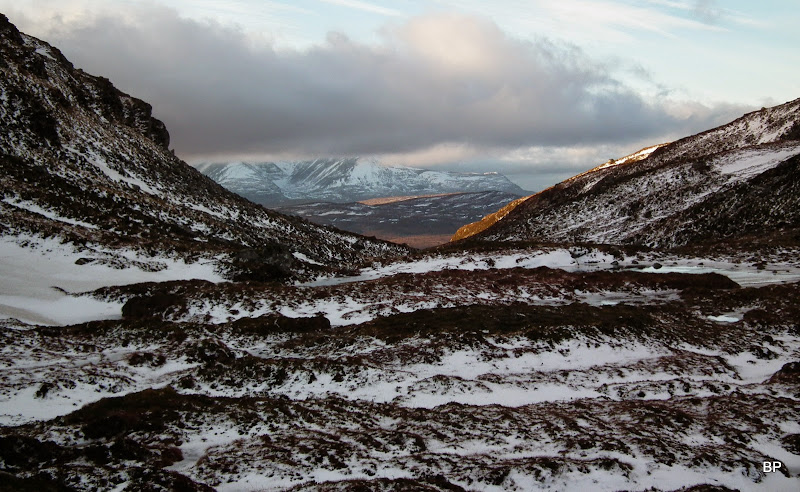 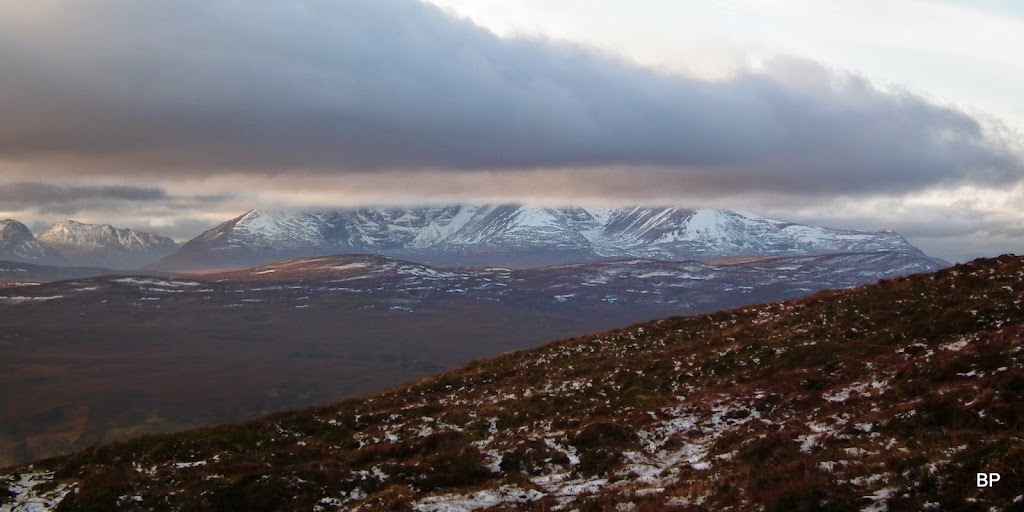 By the time we reached the small waterfall, the Graham behind was sunny. Not fair, not fair! 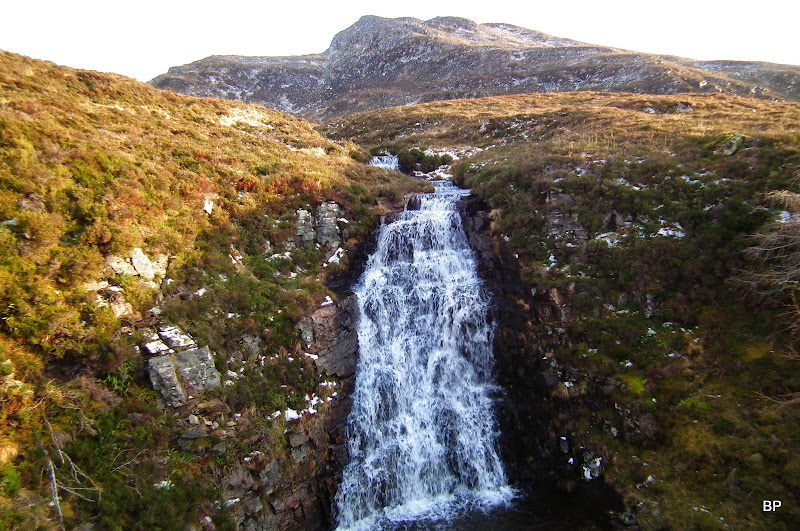 OK, we might not have caught all the panoramas, but I was still more than satisfied with this outing. 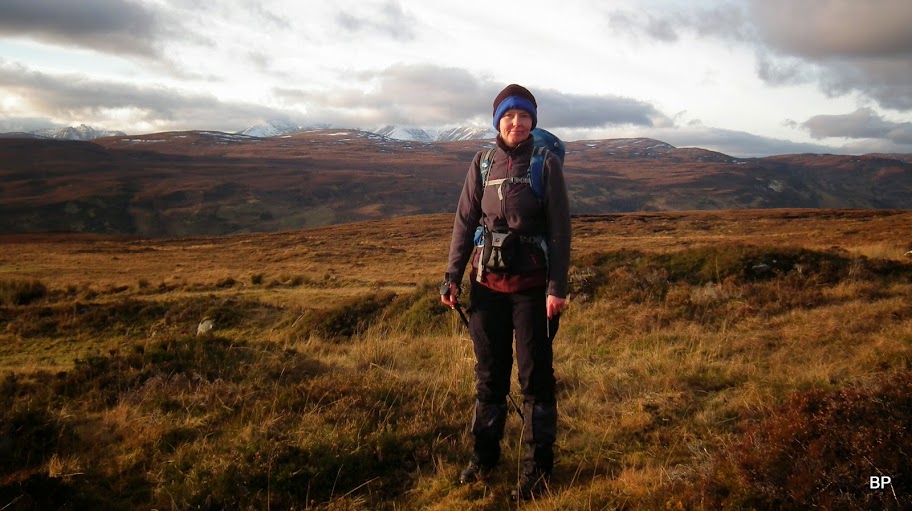 When we reached the Home Loch, the sun was descending and the cloud spectacle became even better. Enjoy the afternoon views with us: 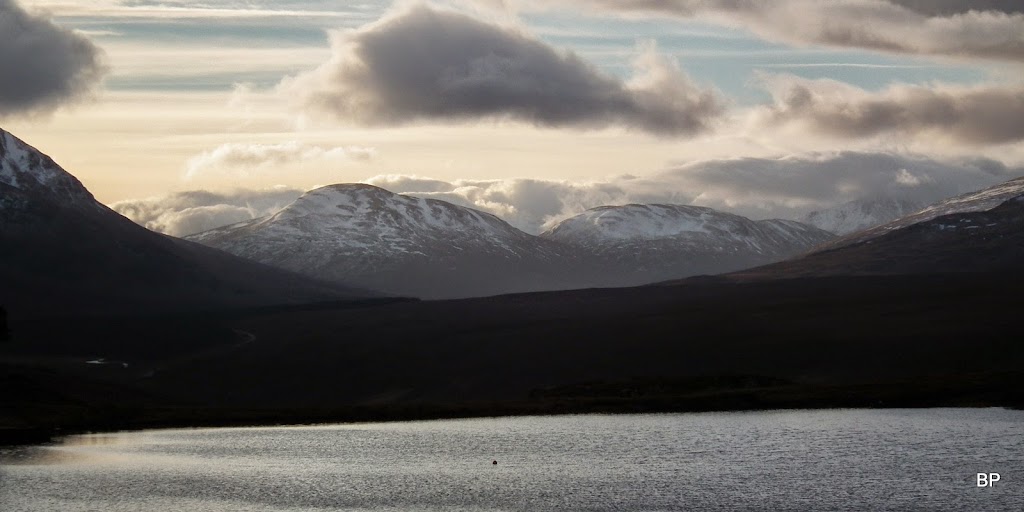 We picked the path leading to the car park and followed it all the way back. Easy enough route, and on a longer day it would be logical to combine Meall Doire Faid and Beinn Enaiglair. We will definitely return to these hills as they are close to home

As we drove back along Loch Glascarnoch, I noticed that even Beinn Dearg was clear... 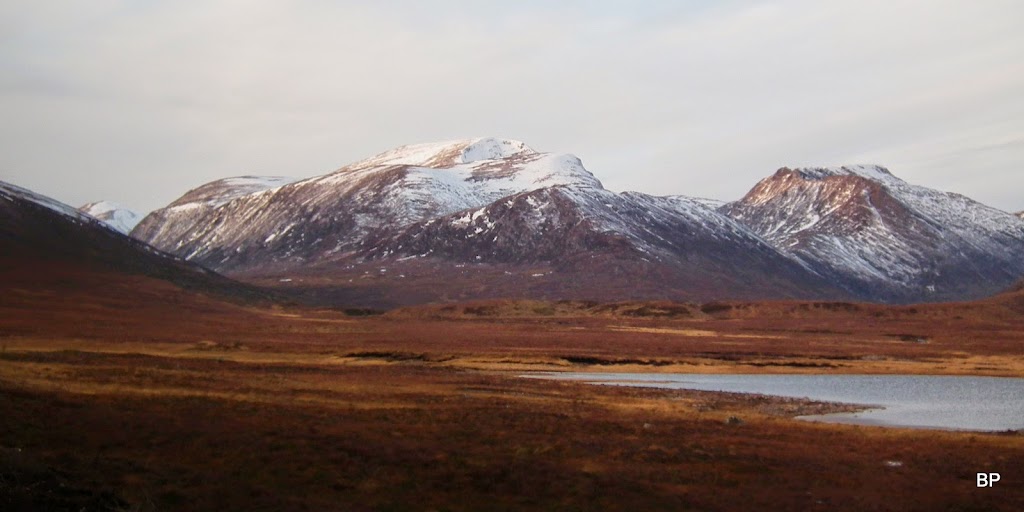 I have one more report to post, from another Graham climbed last weekend. We couldn't miss the opportunity to swim in snow on a frosty day

Re: Winter wanders vol 5: back to Graham bagging

Re: Winter wanders vol 5: back to Graham bagging

As usual with you two, great photos - and also a good incentive for Moira and me to do this one in the early part of the year, so thanks!