Yet another outing arranged courtesy of WH after keeping fingers crossed for a weather window.
I was hoping to head west to venture up pastures new above 3000ft, however the forecast was far better in the east, I was interested in backpacker's post re tackling 'Brown Cow Hill', as I had never heard of it I checked the map and noticed it would involve more driving than walking so I decided to come up with my own plan

Corbett's were on the agenda so I hand picked Creag nan Gabhar and Morrone as they were reasonably close together, well just along the road from each

Gary and Karen volunteered to keep me company so arrangements were made to meet at the start point at 8.30am.
The drive north up towards Glenshee saw us get tangled up with skiers/boarders and others heading to Glenshee, why a motorist drives at a maximum of 30mph and doesn't realise there are over 20 cars behind is beyond me, common sense and courtesy would obviously say "I must be going too slow so I will pull over and let everyone past"

After a brief discussion, we decided to adopt the direct route to the summit of Creag nan Gabhor, the wind at this time was behind us, however there were snow showers whizzing through. The visibility was a real hit and miss, the going uphill was fairly constant, however after a couple of hundred metres we reached the boulder fields, so we navigated our way through them avoiding ice patches.
The surface uphill involved taking great care as the snow was patchy, some parts were crusted over with ice, some were soft with ice underneath, so every step was different Creag nan Gabhor from the roadside The direct way up to the summit Example of the incline Looking back at my colleagues really enjoying the conditions Karen shouting at Gary to hurry up!!!!

Once we reached a ridge line we skirted round to the right (south), the snow on the flatish ground was very patchy, the big difference to the ascent was the depth of the snow, which varied from up to your knees or just walking on the crispy/crusty surface It's a white, white world Zoom into Glenshee & the Cairnwell

Another brief discussion on the best way to descend, we opted for heading east, then south down to the bealach and follow the burn back to the main road. We thought that by opting for this cunning plan, we would avoid descending on the steep icy patches, we did avoid the ice, however we hadn't expected to encounter greater varying depths of snow

Usually descending on snow is easy, long strides heel first and it is great fun, however we really struggled and made hard work of snow that at times was thigh deep

One highlight and in fact the only good thing about the descent, was a large snow patch that was fairly steep with no rocks protruding so this was the perfect spot to finally try out our ice axes

. So let the fun commence, as usual with hindsight I should have taken my camera out but the excitement must have got the better of me

Gary and Karen slid on their backsides down the snow, Gary managed to make a nice line with the pointed end of his axe, without arresting himself and Karen sent her flask rolling down ahead of her (unintentionally)

I had my sensible hat on, mainly because I didn't fancy a wet backside so I walked down the slope backwards using my axe to control the descent

Whilst struggling to follow the burn on the north side, I noticed what looked like a path on the other side of the burn, so we descended down to the burn. I went across the burn first, not an easy crossing as ice was covering some of the stones and the banks, Gary followed and then Karen decided not to bother with taking any risks and paddled through the burn The path back to the cars

Once on the path, the descent was easy peasy and as the going was easier Gary led the way We arrived at the parking area and had a brief chat with a lady who was kitting up with the intention of tackling An Socach, her car was still there when we headed home, so lets hope she had a good day

We headed north towards Braemar and parked in the public car park at Auchallater, after a bite to eat and a drink which made my rucksack weigh next to nothing

we headed off, turned left out of the car park and walked for about 50m along the road, before heading across a couple of bridges and then picking up the track that would take us all the way to the summit of Morrone The track up to the summit of Morrone In any other season the walk up to the summit would be very easy and probably pretty boring, however when snow covers the track every footstep is different, varying depth and texture of the snow, especially in some of the drifted areas.
Initially the walk up the track was fairly straight forward and easy going, however after a couple of hundred metres, the wind became a huge problem, not sure if had increased in strength or just the fact that we were walking directly into it but it really was a struggle as the next few photo's will demonstrate Gary and Karen enjoying following in my footsteps 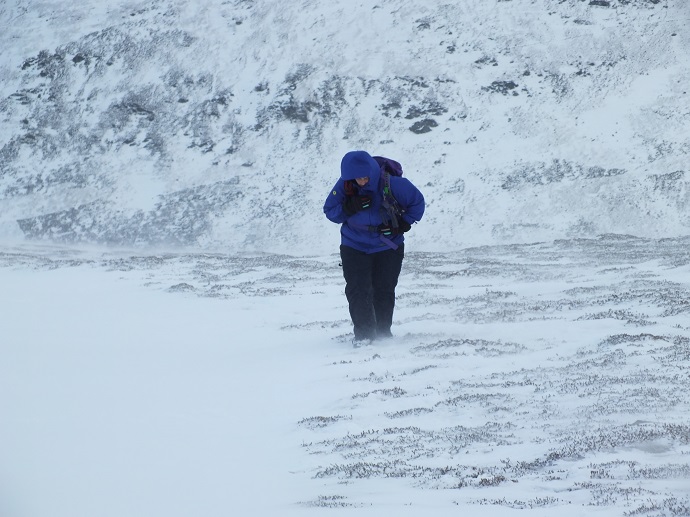 The track zig-zags uphill and eventually reaches a minor top to the south of the summit, there is then a small descent before the summit is reached

There is a trig point which could probably be missed as it looks tiny next to all the buildings and masts that are located on the summit of Morrone. The final push to the summit of Morrone Not sure what direction this was, I do remember it being bitterly cold though A welcome shelter from the relentless wind There is a stone shelter with a bit of electrical gear inside, the door was open so we took refuge out of the wind, in between nipping outside to take a few photo's

Morrone offers some superb views in all directions, it was just a shame that it was too cold to take many more photo's

It took us a shade under 2 hours to reach the summit and just under an hour to descend. The descent was very easy and straight forward. The one great advantage of descending is that you can see the way ahead, so we took a few short cuts across large snow fields which were fun

We arrived back at the car park at 3.30 with tingling cheeks having had our faces cleansed by spindrift, another fabulous day out, no great distances covered but plenty of ascent and descent, in fact on reflection there was hardly any flat terrain

Good Report Martin, I've never felt so clean and refreshed after getting off a summit

I'm formulating a plan at the moment, 3 sub 2K's around south Aberdeenshire, though if the weather is spectacularly awesome it may change

That's an interesting, if steep route up Creag nan Gabhar Martin. Looked like hard work. I did the WH route along glen callater and took in the loch on the route back

Morrone must always be windy. It wad a gale up there when I did it a while back now. The buildings on the summit might not be pretty, but they are useful as a wind break

What a fabulous day it was, even when taking into account falling down--hard!--on the ice not 50m from the car (assorted bruises now working their way through the blue/purple/green/yellow spectrum), the steep climb up Creag nan Gabhar, and the long, difficult (snowbound), breezy* slog up Morrone. Such amazing winter-wonderland views from the top!

I didn't realize until I read this, Flyer, that you hadn't slid down the snowfield on your backside as well. I guess I was too busy watching the flask career downhill.

Thanks, lads, for dragging me out, and the cheery company!