Hot and Cold on Ben Wyvis

Hot and Cold on Ben Wyvis


Firstly, I would like to thank Toyota for their wonderful customer care, without which this climb would not have been possible.

I live in Orkney, and my fourteen year old Yaris was flagged up for an airbag recall. The ferry to the nearest Toyota garage, plus the petrol and a night and a B&B, cost over £200, but Toyota paid for it and I was able to fit in a wee climb up Ben Wyvis before I headed home!

The drive from Inverness, in my newly air-bagged car, was beautiful and rather warm. It was over 20 degrees out of the wind, and in the blue skies I spotted some Red Kites, while Graham drove.

We parked up, and I got my boots on. Graham always waits a while before going off on his own adventures, in case something happens and I come back. This time he went to Loch Glascarnoch. I set off up the path and realised how hot it was! Ideally I would have liked it a bit cooler. The path wound through woodland, before crossing a track. I'd always thought this hill was going to be a bit boring compared to the more exciting ones I've climbed, but it was actually very pretty and enjoyable. The views get better and better as you get closer…. These were my favourite views of the mountain, and the burn was very pretty. I was roasting hot and sweating by now, and had shed all the clothing I could! A few couples were also walking along behind me, wearing very little - as usual I was over-prepared!

The path up the side of the mountain is very steep, but well made. I tackled it slowly, enjoying the views and taking breaks for water. This is the only hard bit of the walk, but it does take some time to get to the top of this bit. Near the top of the steep section, I was overtaken by a pensioner, JOGGING up the path. We had a few words as he passed… "I'm in training for the Pyrenees!" he puffed. I was quite worried about the chances of him suffering a heart attack, but off he went, much faster than me!

When the stone steps come to an end, the views are extensive and very good. After that there is a long but flattish grassy walk across the wide ridge to the summit. This is the sort of walk where it is impossible to get lost, and would be a great one for kids or people who have never climbed a mountain before. You get a long walk with great views and a bit of steepness, but it's safe and easy. I met the pensioner again, this time coming down. "You've never made it to the top already?" I asked. "Oh, I'm not going to bother" he replied. "Too flat!" As I walked across the grassy plateau, the wind became colder and colder. On went all the clothes. By the time I reached the summit, it was so cold I was losing the feeling in my fingers and decided to head back down to the warmth before I had my lunch. I was hungry, but the cold was worse! The temperature difference was huge. I took a few shots of me and Spaz, rang Graham, and headed straight back down. 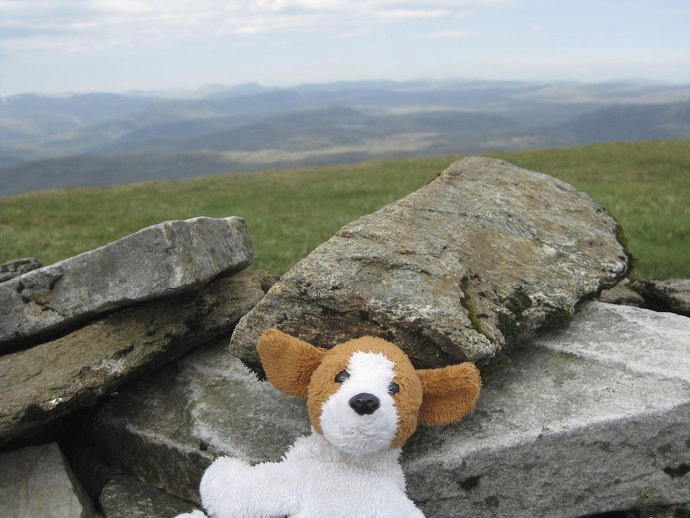 Bits of the path appear to go off the edge…. I stopped at the boulder halfway down the steep bit, ate all my food, and was back at the car park five minutes before Graham. I really enjoyed this walk! Nice One and well done Toyota

It might have been a Highland Hillrunner you saw, they use it as a training route a lot, hardy bunch.The last time I was on the summit you could only see the top of the trig point as the snow cover was that deep it covered the stone shelter enclosure completely, and that was last April on way to the WH Spring meet. Some nice photographs, its a long summit walk and I must admit I'm not over fond of the large stone steps when coming down.

Thanks for the trip write up MusicalHiker....enjoyed your pics too.

Glad you got a good day for it. I was last up there in August with some of the grandkids and, much as you described, it was freezing at the top but they were stripping off by the time we got back to the burn!