High camp in the Cairngorms; Day 2

High camp in the Cairngorms; Day 2

our_route.gpx Open full screen  NB: Walkhighlands is not responsible for the accuracy of gpx files in users posts
After a terrible night sleep due to me being too long for my tent

we packed up and left our gear for a circuit of Braeriach. It's a shame the sun wasn't on show, as the views from up on Braeriach across the Cairngorms are stunning and a bit of sunlight would have made it even better. 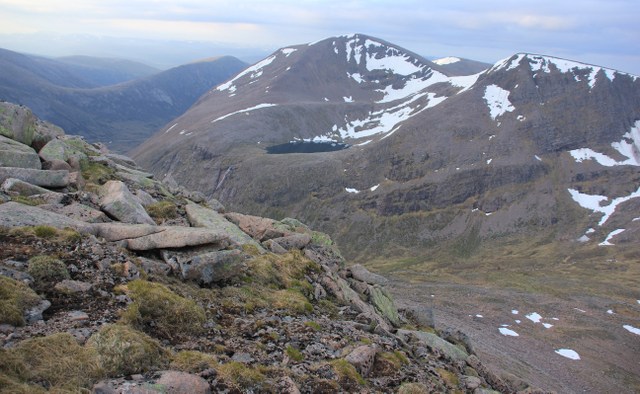 We didn't have far to go to get to the summit, with decent views of the sheer rock faces as we climbed. and some views you can never tire of. Once again, the Snow Buntings joined us as we hit the summit. Ben Macdui joined in the view as well In the distance, the Alder range was still holding on to a fair amount of snow. We continued to follow the edge around to Coire an Lochain, then made for Einich Cairn. On the way, we bumped into the resident Reindeer, which were remarkably tame, allowing us to walk freely among them We returned to collect our packs from the Wells of Dee Went back over Carn na Criche and descended to the 899m point near Loch nan Stuirteag. Quite an easy walk up the flank of Monadh Mor soon had us on it's summit. Good view back to Sgor Gaoith from the ascent. with Cairn Toul's less impressive side on show too. A short break at the summit then on to Beinn Bhrotain. The Devil's Point stood proud to the east of us. with the body of Cairn Toul too. It is another boulder ascent up Beinn Bhrotain, and with the exertions previously, it was a bit tiring going up A short stay at the top, joined again by Snow Buntings ( they were at every summit before we had to make our way to the final top of the day, Carn Cloich-mhuilinn This was a much easier climb, with nice views across Carn a Mhaim before we got to it's summit. All that was left now, was a long walk out and back to the car, but the day was warming and brightening up, so it wasn't so bad All in all, a great two days which we hope to do again, preferably when I get a new tent

Yes we were lucky to have any view, as it was forecast to be low cloud that day. The Reindeer were an added bonus.

They had new calves when we were there.. Cutest thing ever..