Despite the Pennine Way crossing its flanks, Fountains Fell is much less well known that its more famous neighbours of the Yorkshire Three Peaks to the North West, but hundreds of years of industrial history and a real sense of solitude make this a much more exciting fell to explore than the likes of Pen-y-Ghent, Whernside and Ingleborough. The approach to Darnbrook Fell, however, lacks much interest, but the surprise at the summit of this rounded moor top make it worth the walk.

The rain of the night before had caused a thaw in the snows which had been lying in Malhamdale for over a week, and even up on the high ground around Malham tarn it seemed to have been raining overnight rather than snowing. So at the walk's starting point where the Pennine Way crosses the lane to Arncliffe, the remaining snow was soft underfoot, except where it had been compressed into ice by the comings and goings of tractors on the farm track. 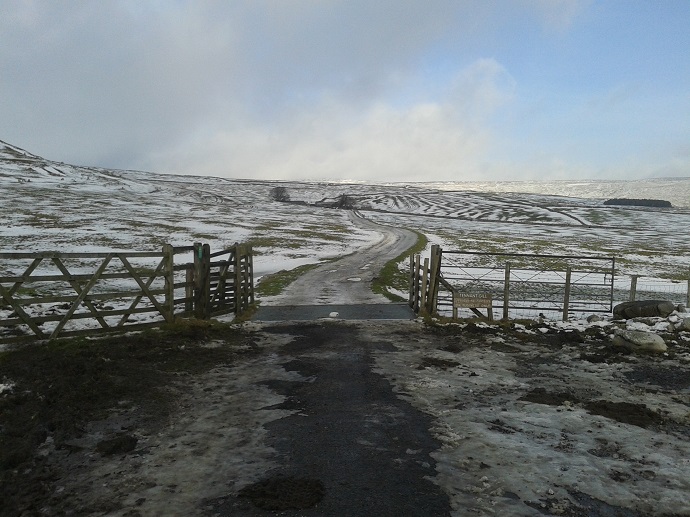 The beginning of the walk on the farm track

The Pennine Way first passes Tennant Gill farm before reaching the open moorland, where it traverses the Eastern flank of Fountains Fell. The path here has been reinforced by the national park, and while they would argue that this was necessary for the level of traffic associated with a major national route, it could perhaps have been done slightly more sympathetically than the wide strip of black aggregate that usually stands out against the moorland terrain. However, today the path was under snow, and although the dogs were enjoying it, conditions were looking ominous on the fell above. 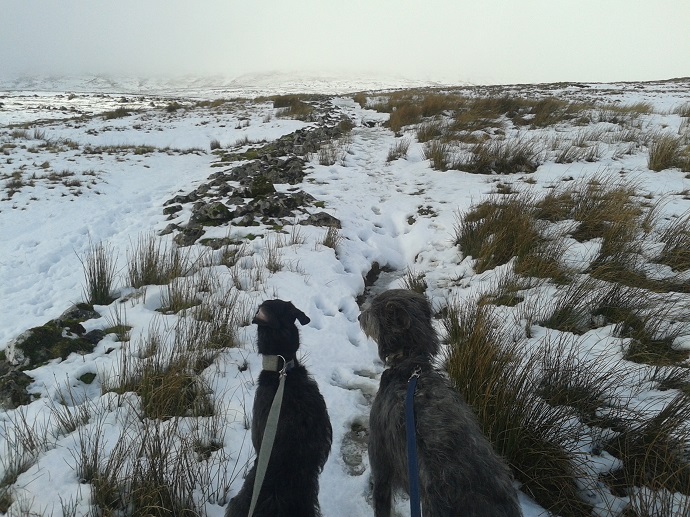 Looking towards the felltop in the clouds

As height was gained, the snow thickened, and soon the cloud level was reached at about 600m above sea level. It's also at about this elevation that the real interest of Fountains Fell begins, as from the late 18th to the early 20th century, Fountains Fell was the site of much industrial activity, with both coal and lead being mined on the summit plateau. Indeed, certain maps still mark this area as Fountains colliery! 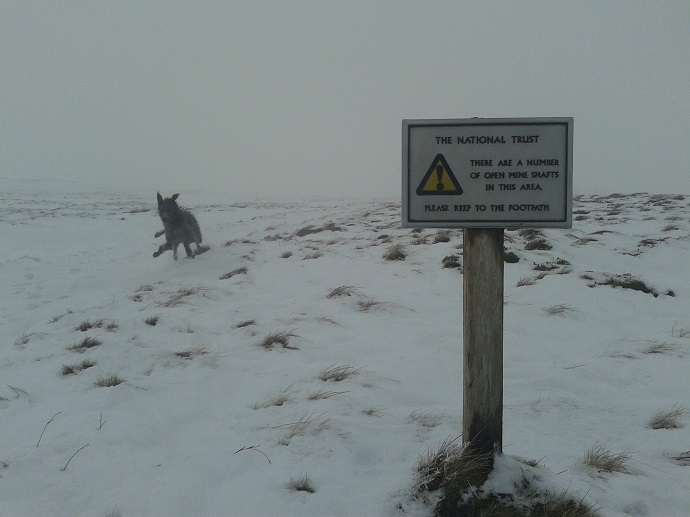 Islay wasn't too concerned about the dangerous terrain!

At this point the Pennine Way continues to skirt around the top of the fell to the east, which is a great loss for the thousands of walkers every year who get within a few hundred metres of the summit, but don't enjoy any of its most interesting features. But the Pennine Way's loss is the more adventurous walker's gain, and on leaving the well made path behind, you are immediately rewarded with some interesting industrial relics. 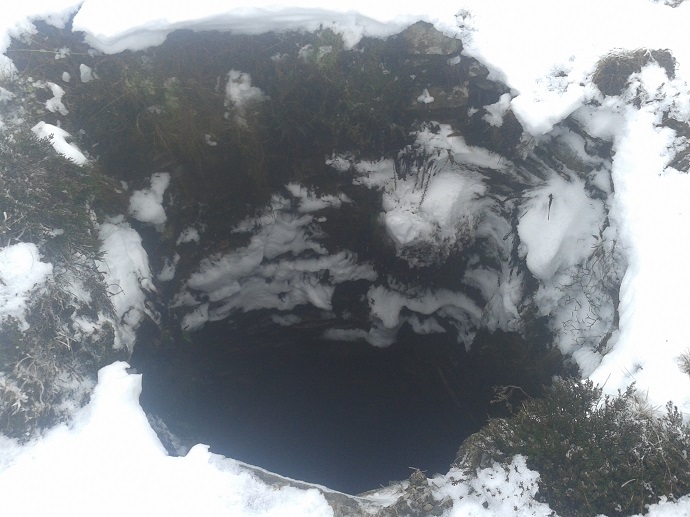 Its amazing to think of how bleak life must have been for the men who lived and worked up here, and today's snowy conditions only added to the feeling of isolation. But this only makes the area all the more interesting to explore today.

The summit itself, however, is a bit of a disappointment. The Dales are not renowned for their exciting peaks, and Fountains Fell is no exception. A rolling moor top rather than a peak, the top is marked with a large cairn, which today was windswept and miserable! A drystone wall traverses the summit area, and as the weather was poor, this acted as a handy navigation aid. However, drifting snow by the wall made walking tricky. The thaw in the dale hadn't seemed to have reached this height up the fell yet, and the snow was intermittently crispy where it had blown from the surface, to soft and difficult to cross where it had drifted. The dogs were really starting to struggle! Snow drifts by the wall 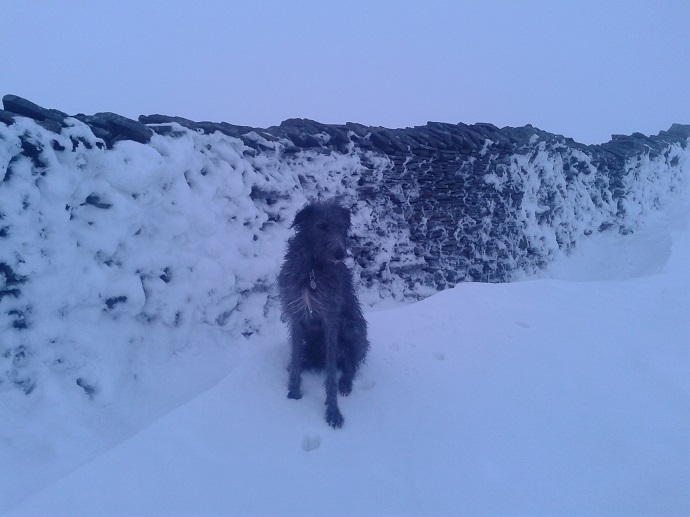 Th descent to the north east on the way towards Darnbrook Fell is across open, pathless ground, and even with the snow cover, it was obviously very tussocky, making it hard going. The wall, however, provided easy navigation, and as height was lost, the clouds broke to reveal glimpses northwards to Pen-y-ghent. Despite being open access land, the gate on the adjoining wall was padlocked, and had a high fence above it, making it difficult to cross to the East side on which the summit of Darnbrook Fell lies. Angus in the snow

The final approach is over rolling boggy moorland with large peat hags making for tough going. Then from quite a far distance the summit trig point comes into view, and this provides the main point of interest on this fell. (Lets face it there aren't many others!) When the trig was originally constructed, they must have anchored it with a concrete base in the peat, but over the years the ground at the top of this moor has been transported and eroded by the harsh weather conditions, leaving the concrete base exposed and standing proud with the trip point atop it. Now it was time to retrace steps back to the Pennine way and the easier conditions under foot that were on offer. Although the weather was improving, Fountains Fell still resiliently hung onto its crown of cloud, but on reaching the Pennine way and the descent off the hill, we were soon back into clearer skies. As the light faded the dogs lead the way off the fell, following the Pennine Way as it traverses the east of the hill. At this point there were great views north eastwards towards Arncliffe, where Cowside Beck follows a deep cut in the landscape towards Littondale. This report brought back a few memories for me as I used to live at Darnbrook Farm! A regular trip was to head out to Fountain's Fell Tarn on my horse, watching out for the open mine shafts on the way. (Didn't follow the same route as you walked - went out from Darnbrook Farm, onto the fell top near the barn and then met the Pennine Way path.)

Also been on the top of Darnbrook Fell a few times in the snow looking for sheep in the snow drifts, it's a very snowy place in the winter! The roads often used to be shut for weeks at a time when I lived there. The trig point was raised up out of the peat even then but looks a little more so now!

Interesting to see your report and makes me think I must go back and take a walk up there again - no horse now unfortunatley!

That shot of Islay galloping past the sign at full speed is awesome, as for those random open mine shafts

I used to walk all over the dales as a lad (and run for that matter) never knew they were so plentiful.....I'm lucky to still be here

I did these two a few years ago in thick mist and never even saw the Tarn so last year went back to fountains Fell this time in better weather. Great views to the South and PYG. I think the trig on Darnbrook looks like it might collapse before long, I'm sure more has eroded away around it since I was there.