our_route.gpx Open full screen  NB: Walkhighlands is not responsible for the accuracy of gpx files in users posts
Seeing as Blair Atholl is not too far a drive ( only 4 hours

) the Beinn a'Ghlo munro's were chosen as what could be a decent day out. We parked at Loch Moraig, were, unfortunately, the cloud was covering the top of Carn Liath. We headed off along the path, making easy time and were quickly at the hut which is the turn off point to begin the ascent. A bit of a boggy way to start, but we were soon on the lower slopes of Carn Liath. As we climbed, we were treated to a great chase involving a Meadow Pipit and a Merlin, which it would seem the Meadow Pipit won!! The loose scree made the ascent a bit worse than it should have been, but soon the trig point and summit shelter came in to view, albeit shrouded in mist With not much to see, we made our way off and across Beinn Mhaol, to head for Braigh Coire Chruin-bhalgain. 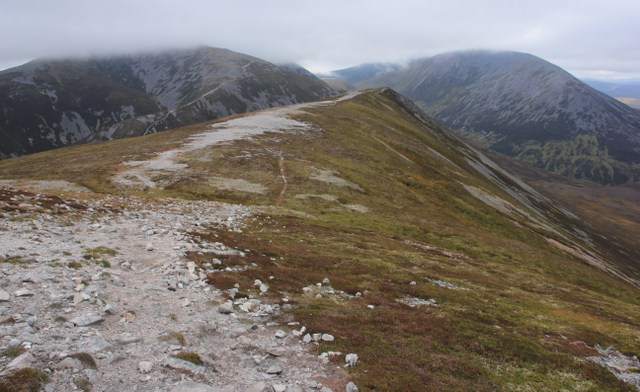 There is quite a descent before you begin climbing once again, though this was easier under foot than Liath. Once again, the summit had low cloud on it, but we chose to stop for a bite to eat before heading for Carn nan Gabhar. Carn a Chlamain was visible from our lunch stop. As we headed off the view north improved considerably. 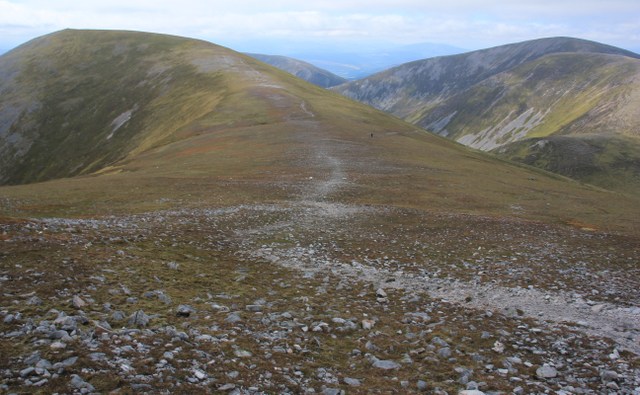 We made our way up the body of Carn nan Gabhar, a reasonably straightforward ascent, reaching the trig and summit. The munro's of Beinn Iutharn Mhor & Carn an Righ were on show. The Cairngorm range with Cairn Toul and Ben Macdui visible could also be seen, if a bit hazy!! Time to move on to our last Top of the day, Airgiod Bheinn. Should have done this walk going backwards as views behind always seemed to be better It's not much of an ascent up Airgiod, but it is a very rocky top. From here it is quite a walk back to the start, starting with a steep descent off Airgiod Bheinn, followed by a traverse of the body of Bheinn Bheag, below Carn Liath. There was a large herd of deer moving across the hillside as we made our way round. Once we hit the path, it didn't take long to arrive back at Loch Moraig, ready for the short!! drive home Re: Beinn a' Ghlo Munro's

A good report from an impressive range, mamoset, and a walk I still have to do.

Re: Beinn a' Ghlo Munro's

simon-b wrote:A good report from an impressive range, mamoset, and a walk I still have to do.

Thanks simon, the route we took seems to be the norm, a bit bumpy descending Airgiod Bheinn though.